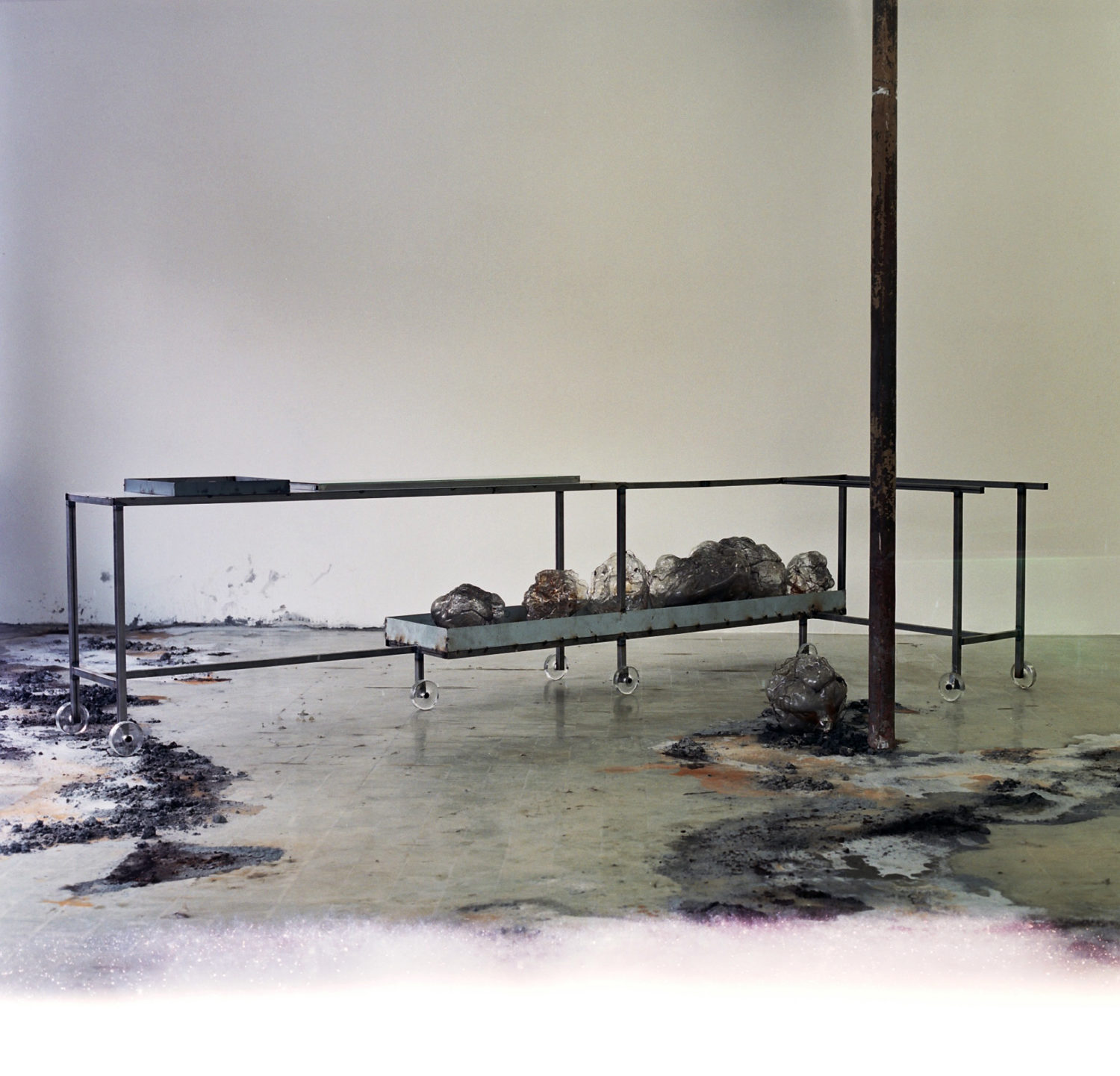 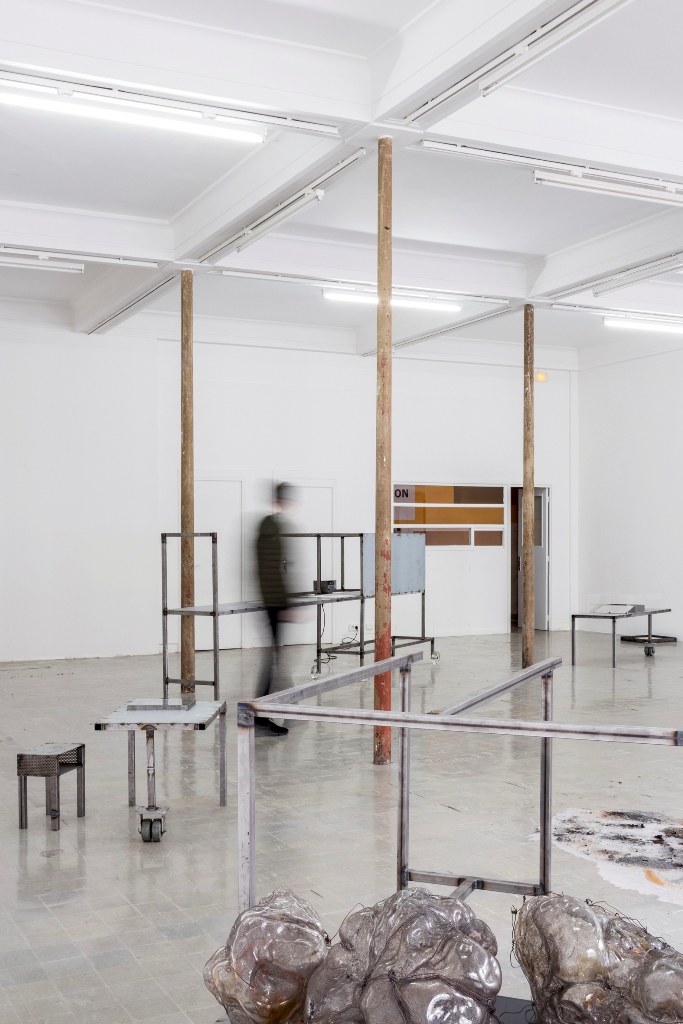 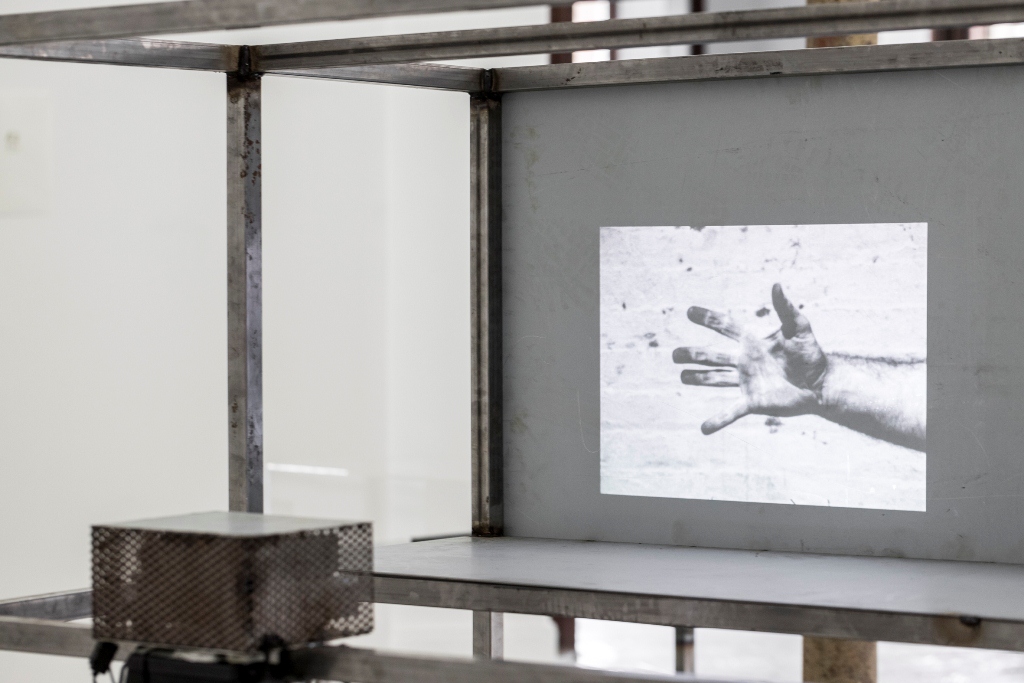 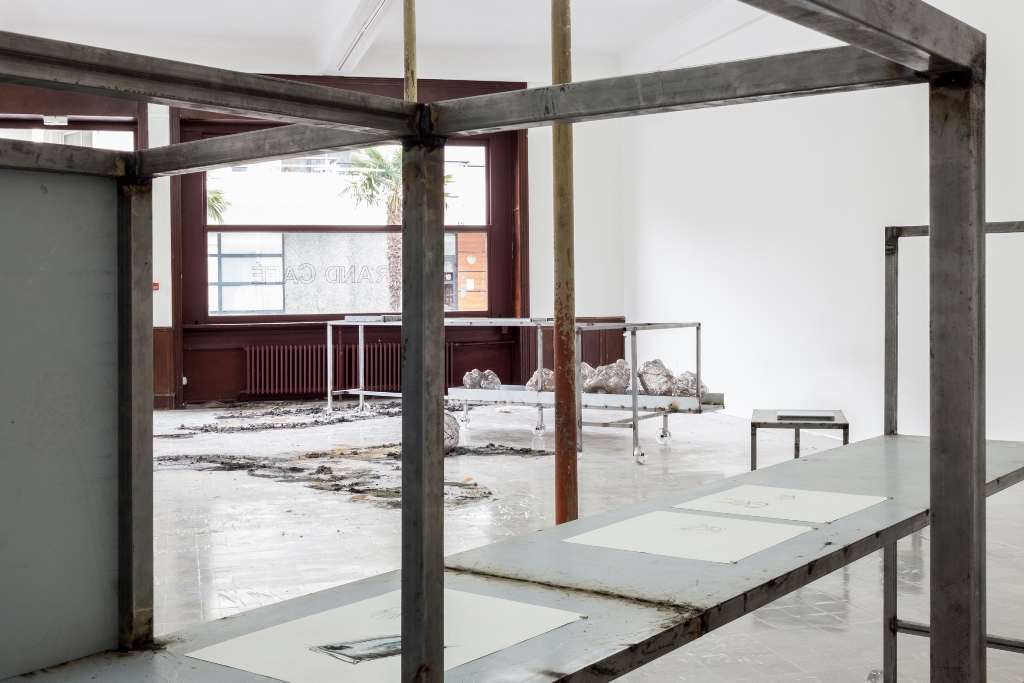 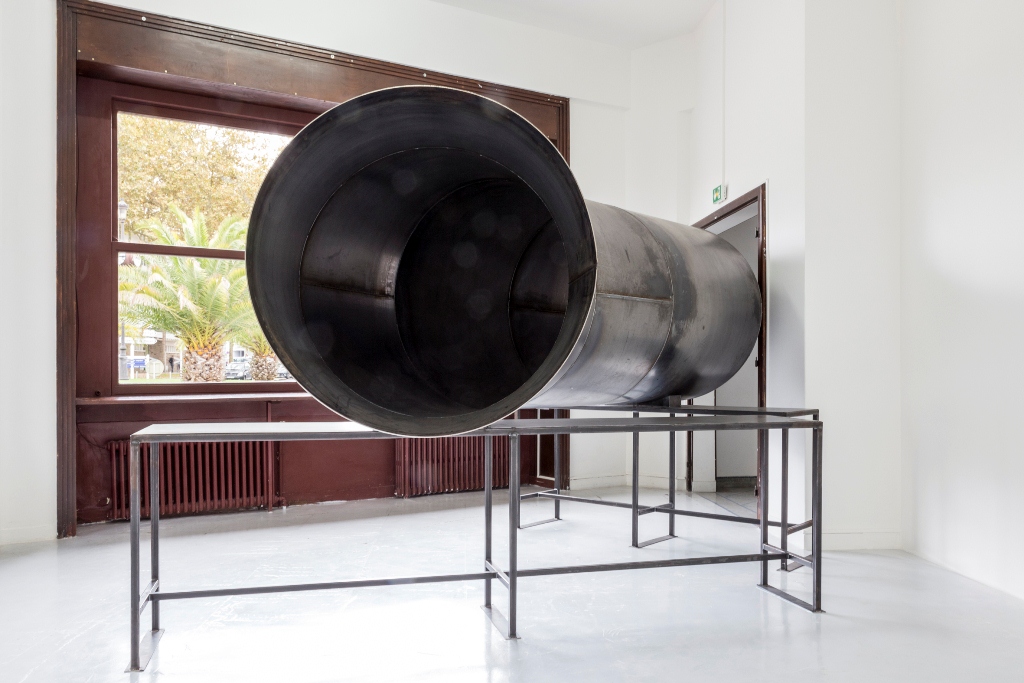 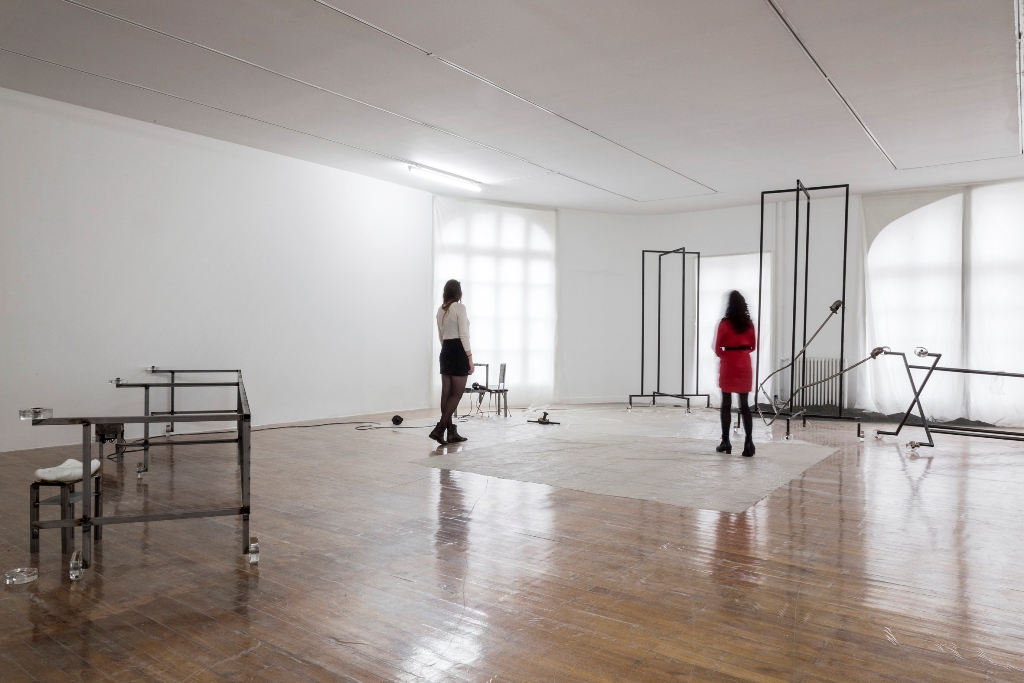 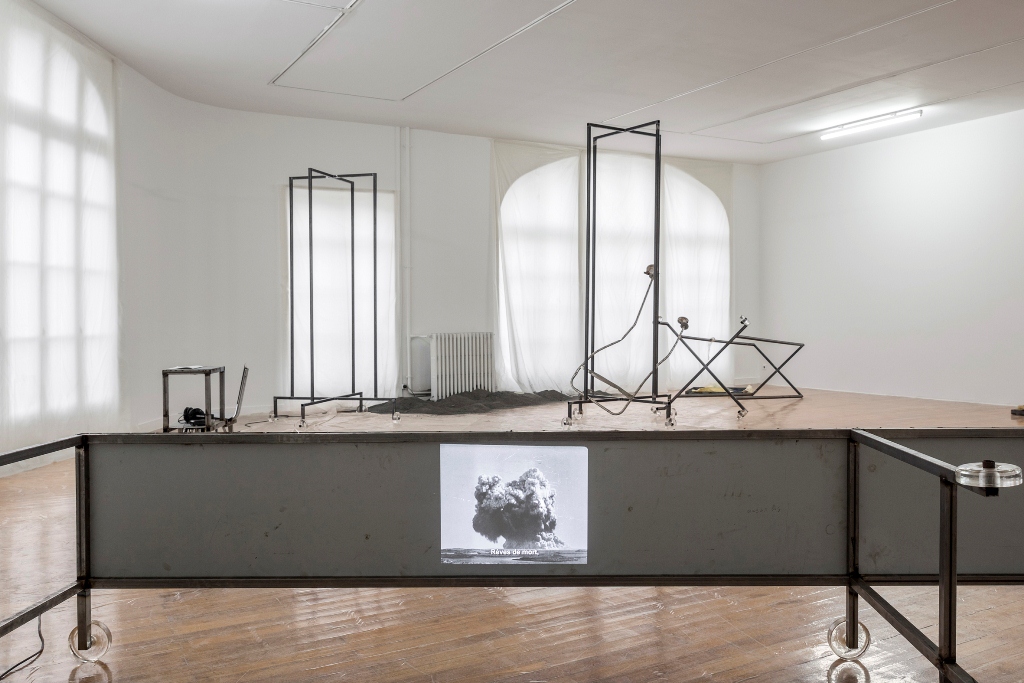 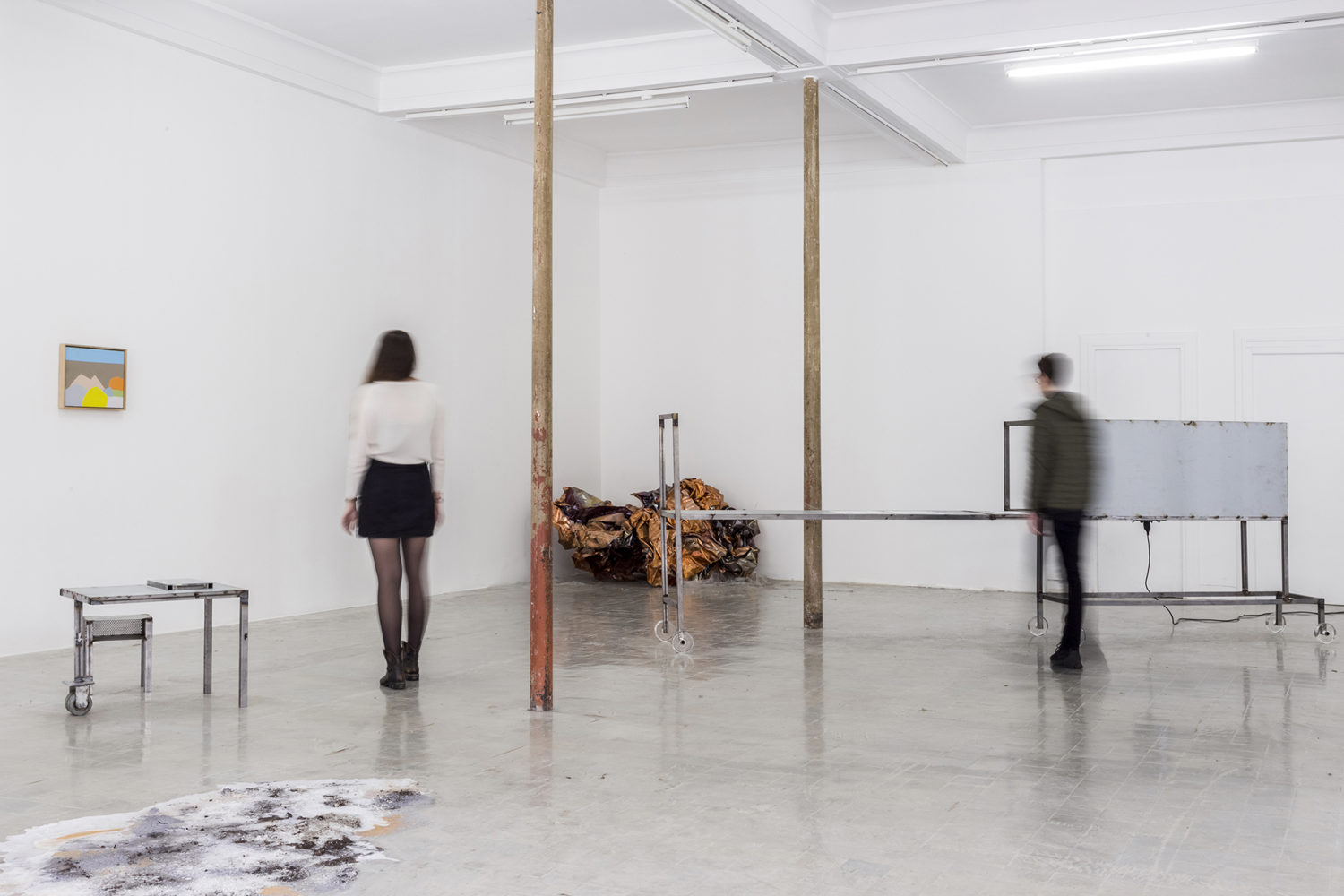 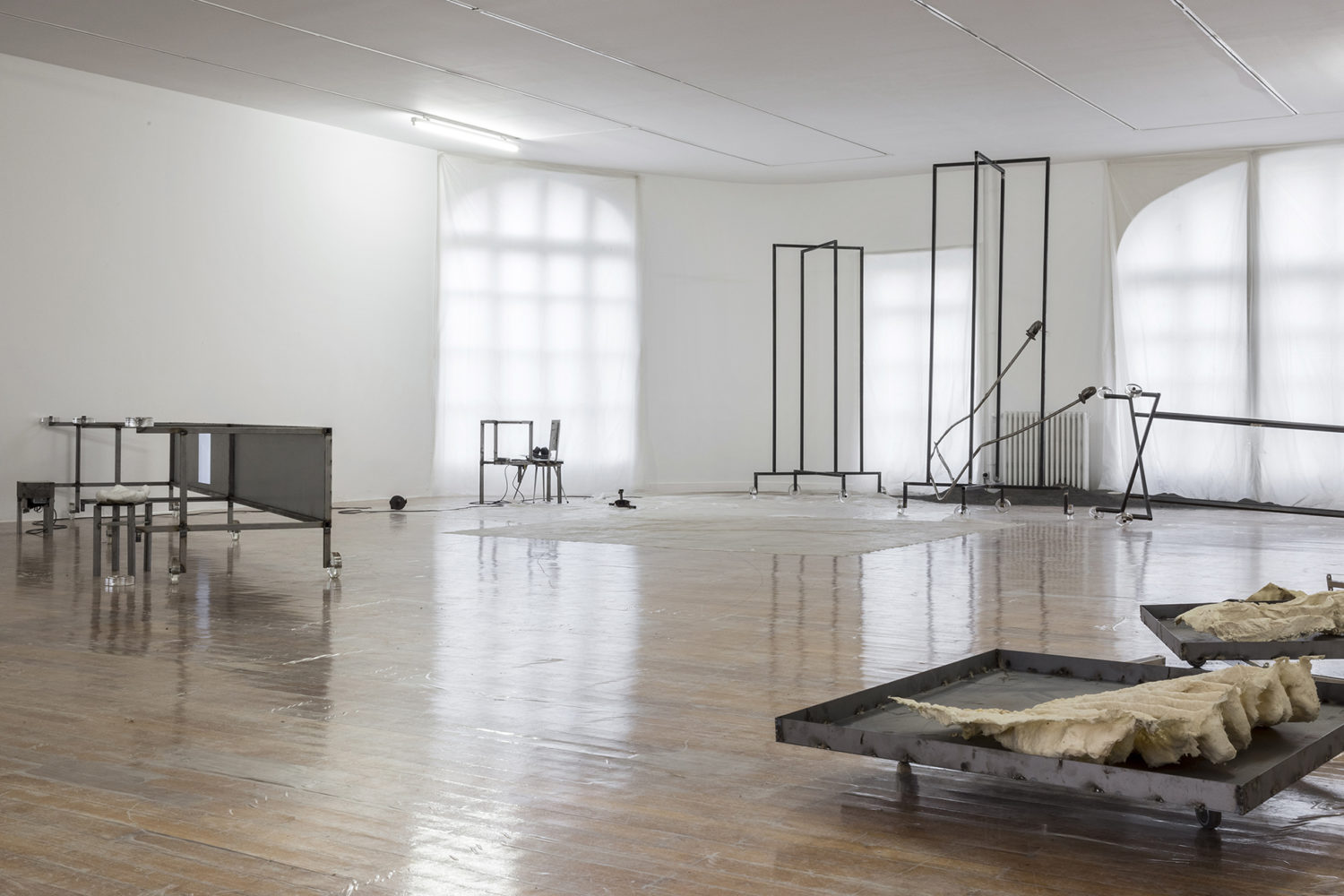 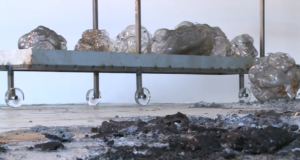 « Under construction, everything is only half complete. In ruins, all is complete. »
The Prince, Béla Tarr, Werckmeister Harmonies, 2000

Young duo mountaincutters is a hybrid, practising in situ sculpture that radically contaminates the space of the sites where he/she exhibits. The vagaries of identity are echoed in a corresponding aesthetic incertitude that emphasises transitory situations and unfinished forms in apparently fortuitous compositions of a savage beauty. Corrupted materials and dirty objects, dust, earth and rust invading surfaces and floors, broken concrete slabs, rough and ready ceramic, continuously circulating water: mountaincutters installations are traces of improbable activities, caught between construction and destruction, between architecture and archaeology, and looking at times like an abandoned building site. A raw, not to say brutal, character where the ‘misshapen’ arouses a degree of doubt or unease and also a particular fascination for the ruined. This obvious aridity can’t hide the rigour or the precision of some discreetly theatrical, even spectacular, compositions that always suggest an activity ‘by implication’. In fact, everything here resonates with an absent body for which these sculptures would be artificial limbs and organs, rudimentary and insufficient appendages locked into a functional logic whose finality escapes us. And if it were a scene from theatre, it would be from tragedy, or more precisely from the resurgence of tragedy in the industrial era. There is in fact a literary side to mountaincutters’ sculptural practice. The written work that accompanies it, raw poetry written in the first person, organically mirrors the material structures. Photographs sometimes appear to offer the beginnings of a narrative; from there on, an unfathomable mystery emanates from the oeuvre, taken in the two etymological senses of work and of opera, i.e. related to difficulty and bodies being modified, but also to the enigma of creation.

The Spolia exhibition project unfolds the work of mountaincutters across a vast installation that includes new productions (with sculptures, drawings, videos) yet is also a receptacle for other forms – films, objects, texts, documents, works, etc. – chosen by the curator and the artists to echo their work. From Etel Adnan’s paintings to artefacts produced for the replica of the Chauvet Cave, from Pasolini’s politico-poetic approach to the experimental music of Moondog, by way of poetry by Christophe Tarkos or Manuel Joseph, these heteroclite elements form a kind of ‘fictional genealogy’ laid out in space. A zone of muted tension pierced at the surface, as if by capillary action, with remnants of the repressed.

The title of this simultaneously collective and individual exhibition, Spolia, comes from a Latin word that designates the architectural use of a fragment of an existing construction by integrating it into a new whole. The obscure origins of this practice – at different times and places out of necessity, homage or displays of dominance through ‘despoiled’ property – sits perfectly with the fundamentally archaeological character of mountaincutters’ work and with the hybrid nature of this particular project. The artists carried out research in Saint-Nazaire and the surrounding area ahead of the exhibition, drawing on the industrial, historical and sensual resources of places. The whole therefore makes up a kind of ‘meta exhibition’ or total artwork giving an enlarged understanding of both their work and the ghosts that haunt it. It is notably concerned with destruction, fusion, fossils, tragedy, reparation, poetry and politics, but captured in a non-discursive system arising instead from the ineffable, or even from the literally ‘unnameable’, i.e.: that which refuses to be named.

mountaincutters
Lives and works in Marseille and Brussels.