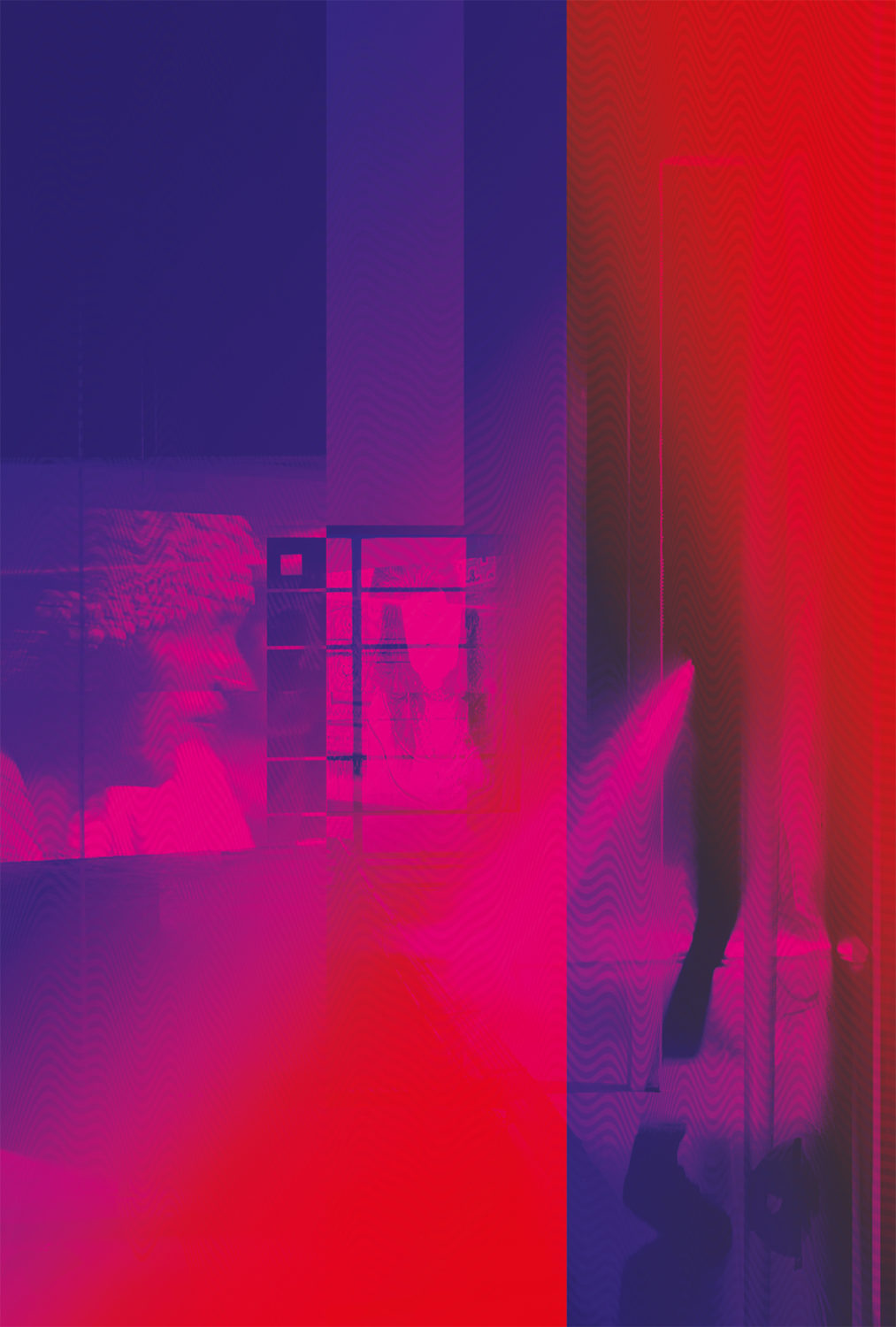 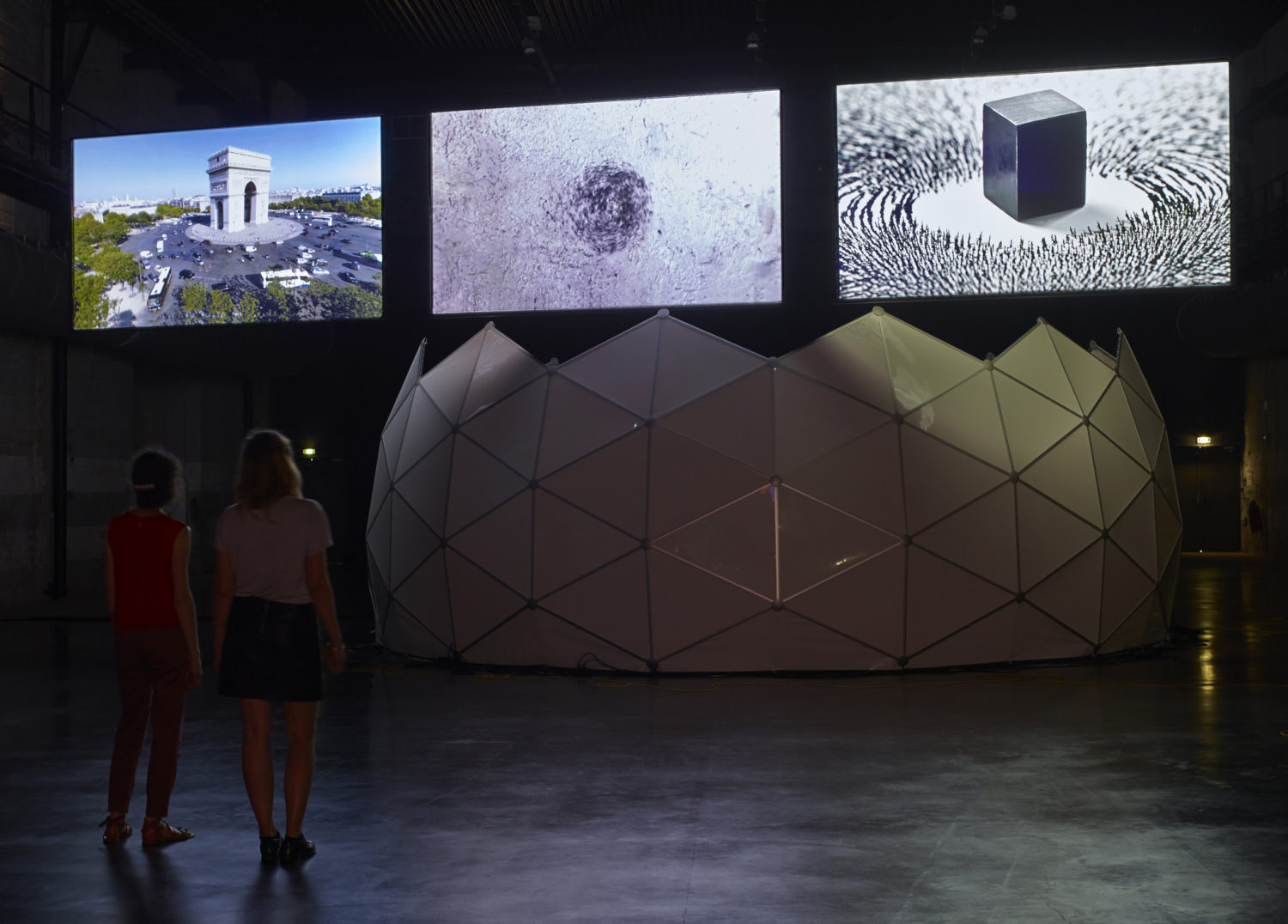 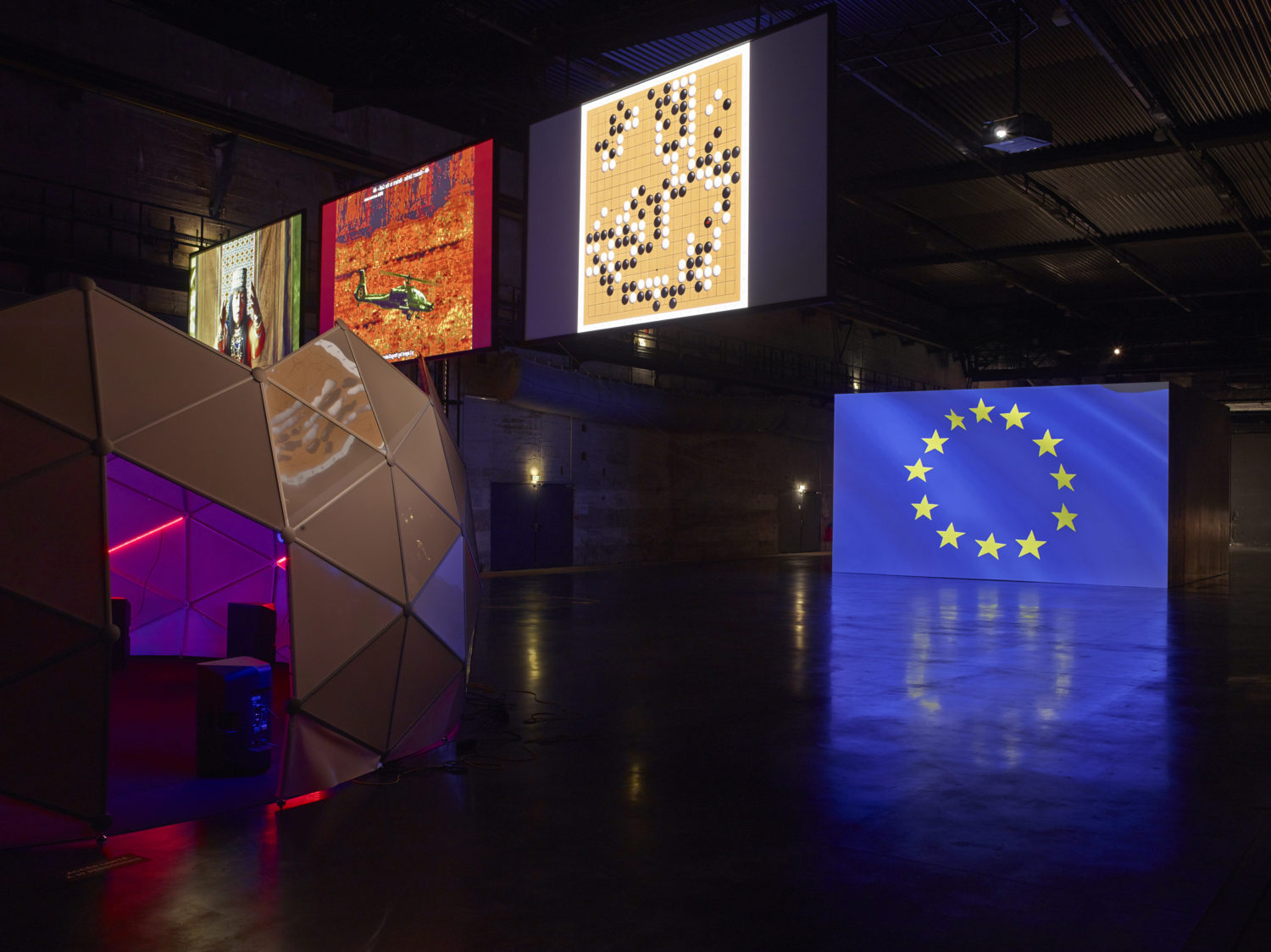 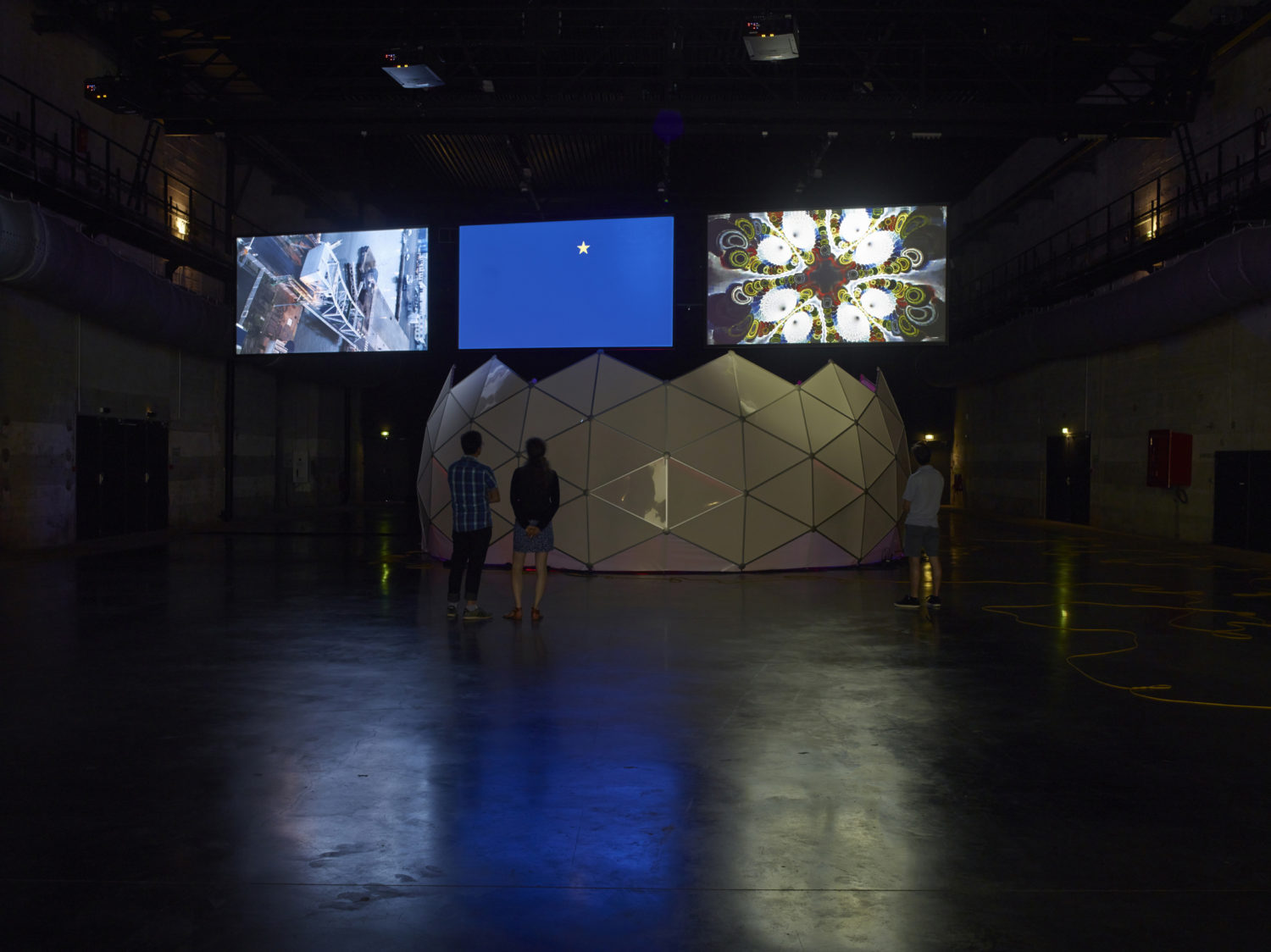 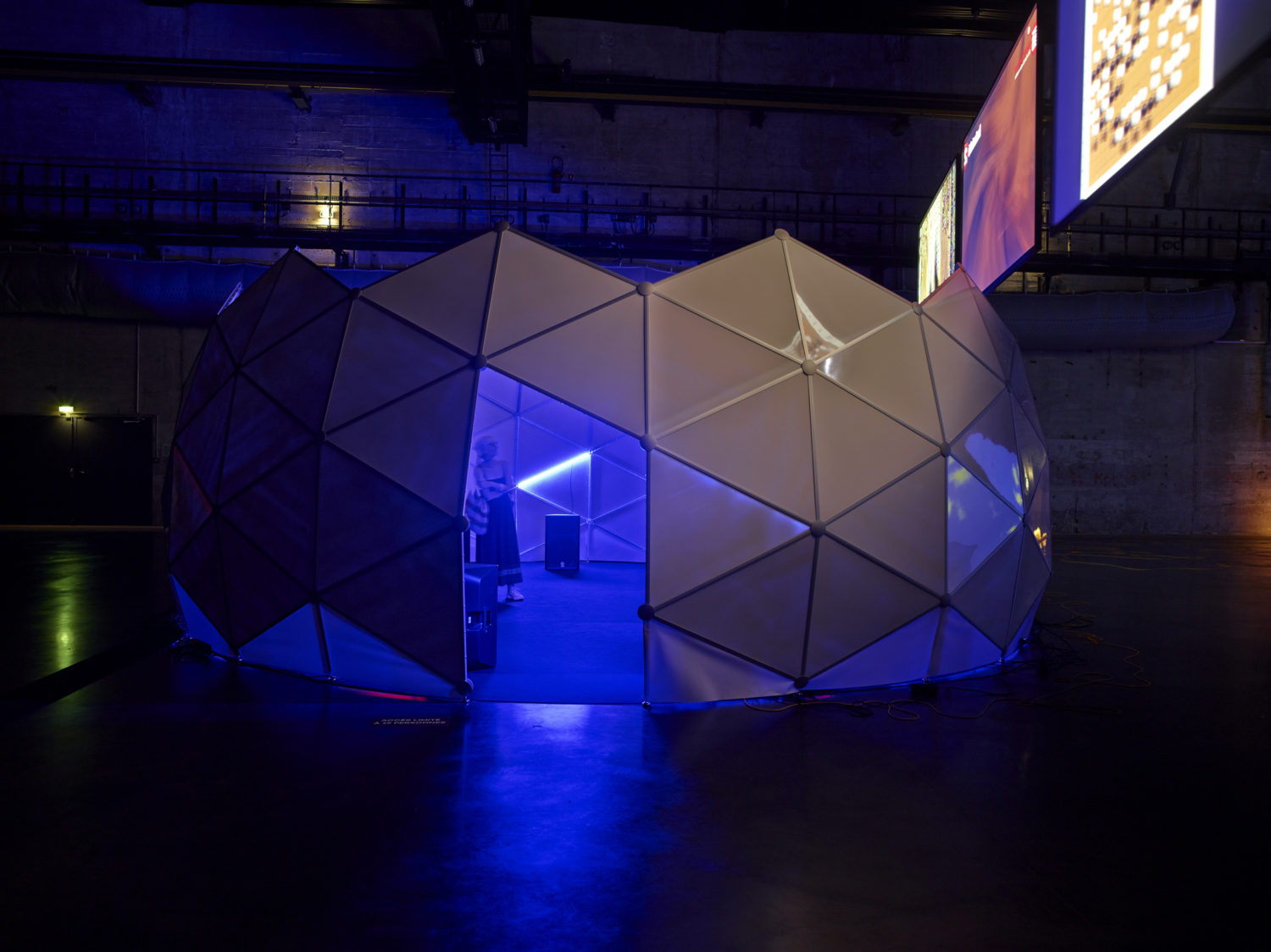 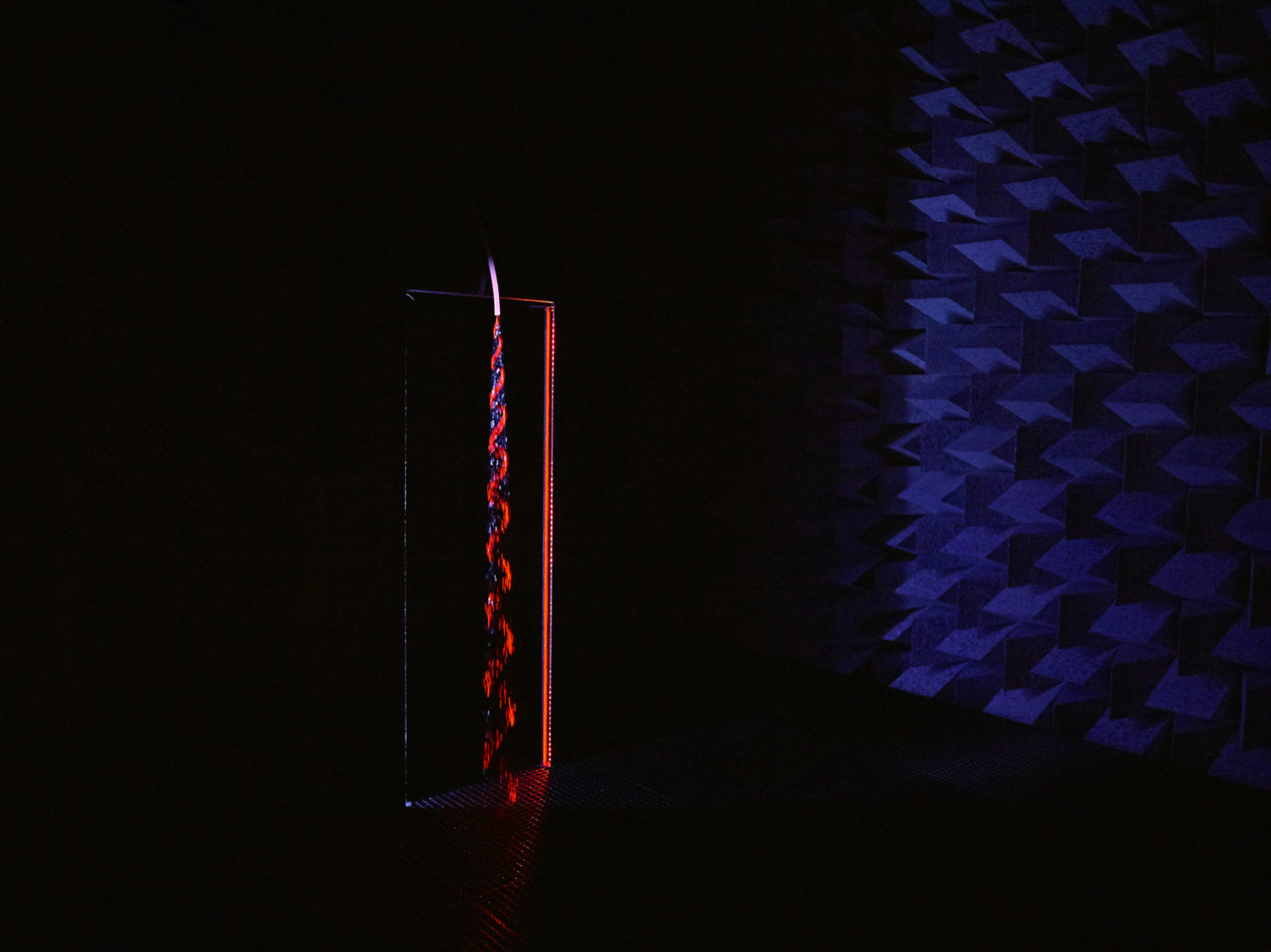 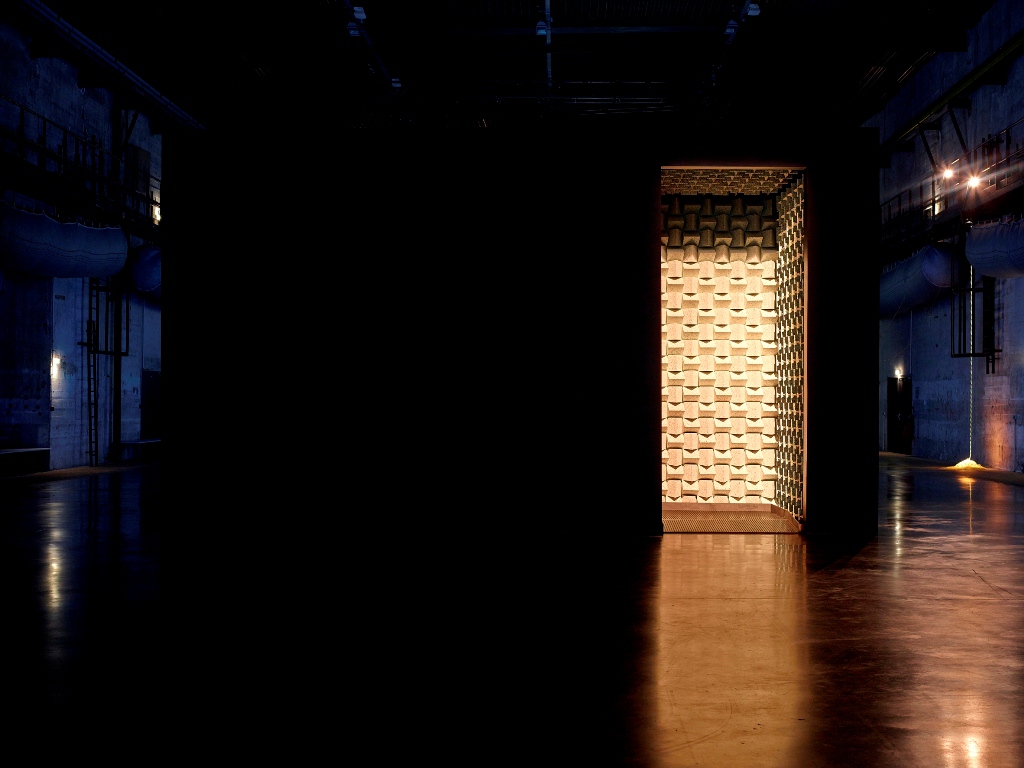 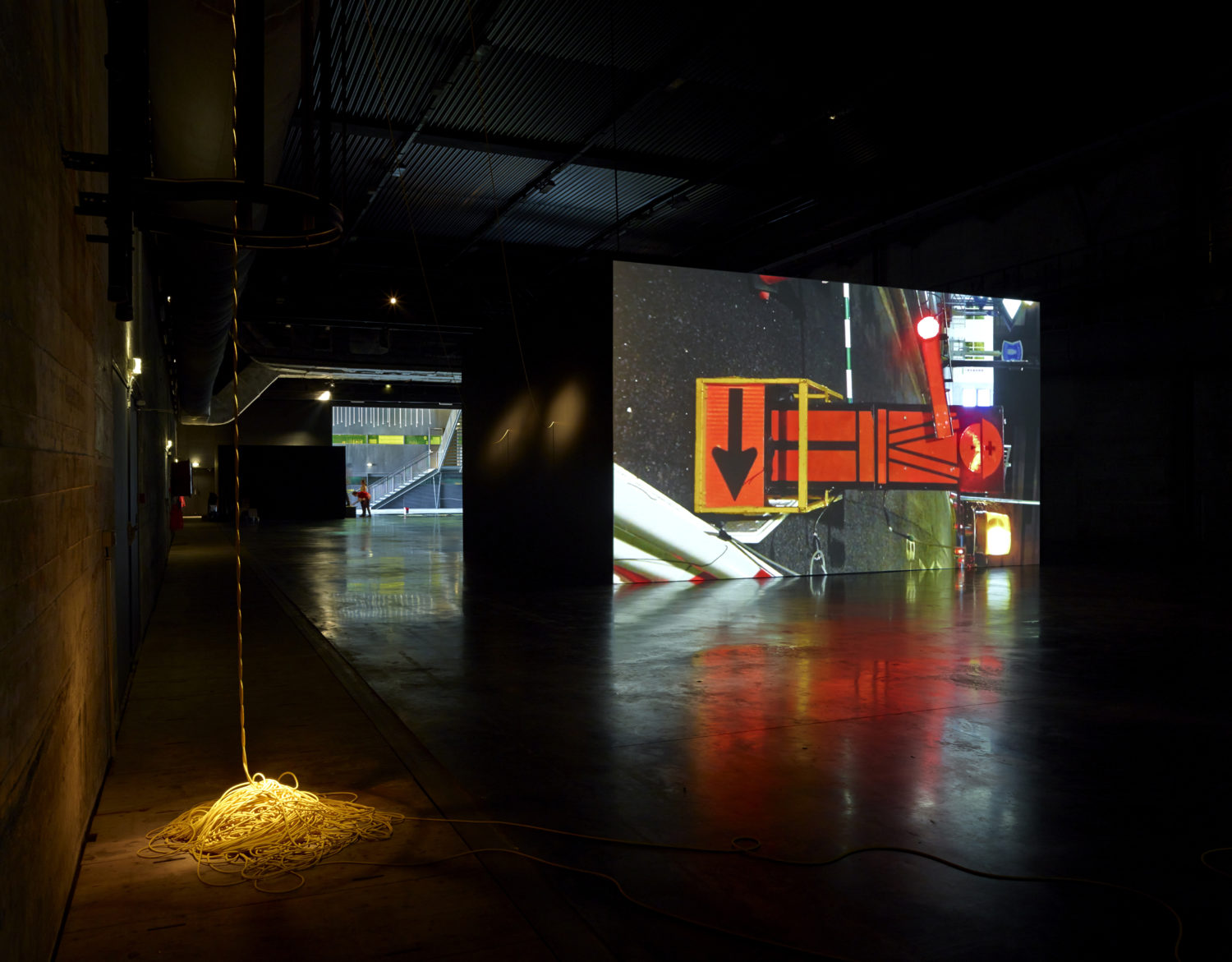 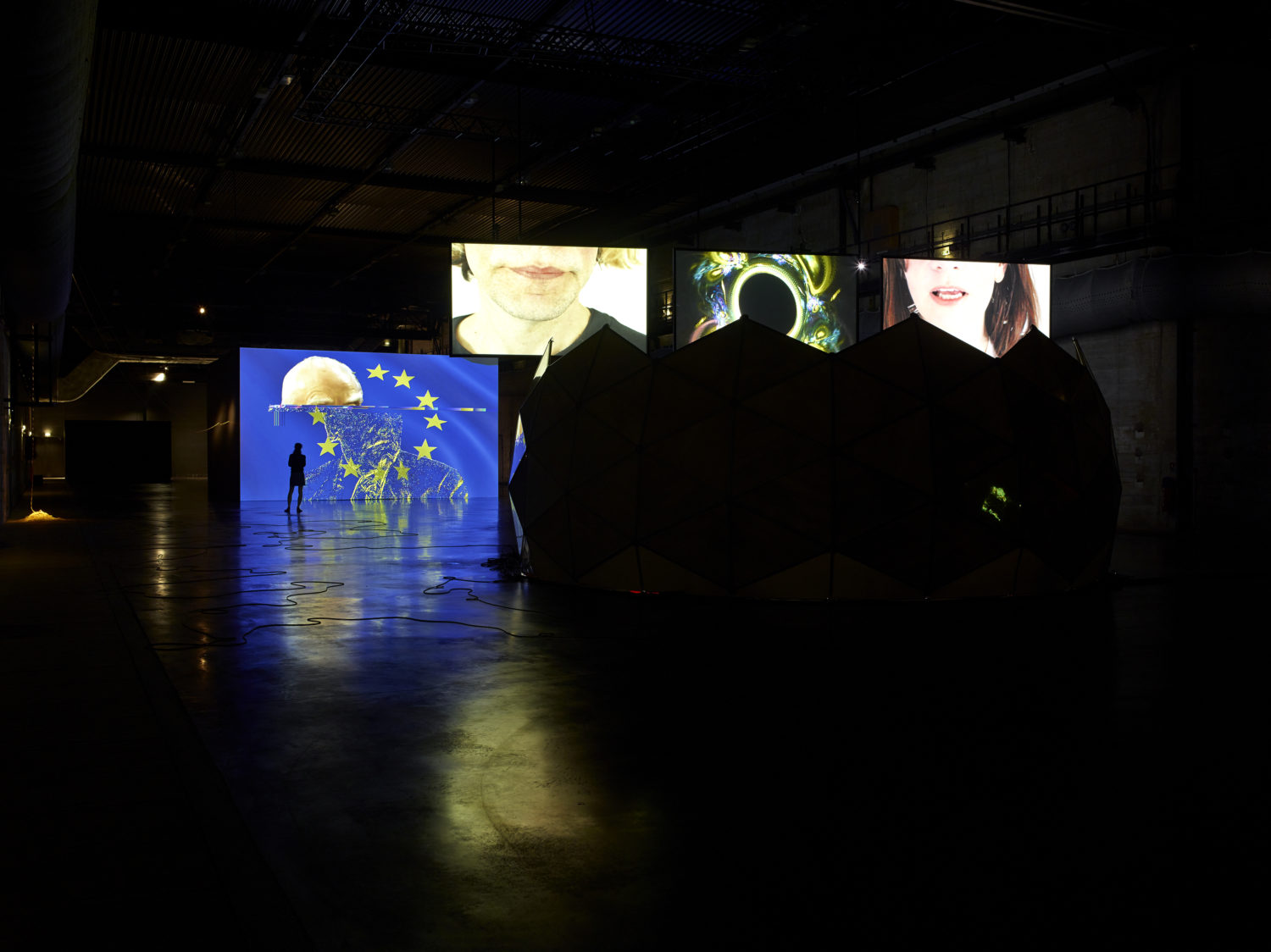 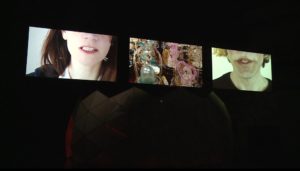 /\/\/\
Entitled /\/\/\, and presented by Haroon Mirza under the name of his studio, hrm199, this project has been conceived in response to the monumental specificity of this atypical space which is now celebrating its tenth anniversary.
Haroon Mirza is showing a work at the intersection of different fields of knowledge, reflecting the LiFE and its multidisciplinary programme. The artist has collaborated here with architect Francesca Fornasari and musicians Nik Void (Factory Floor) and Tim Burgess (The Charlatans) to produce a work that sculpts the acoustic space in the visual space, and vice versa.
Since the opening of the LiFE, artists such as Anthony McCall, Simone Decker, The Chapuisat Brothers, Jeppe Hein, raumlaborberlin and now Haroon Mirza have taken up the challenge of mastering the 1460 m2 of the former shelter for combat submarines.

Haroon Mirza is an artist of interaction, sculpting acoustic space within visual space and vice versa. His work fluidly combines ancient and contemporary technologies, and offers us installations with multiple issues that brilliantly reflect the complexity of our universe. The immediacy of perception is an essential question for Haroon Mirza, who uses sensation to facilitate reflection.
The exhibition that unfolds within the LiFE’s monumental space has the form of a science base where prophetic visions meet with primitive beliefs, reminiscences of Saint-Nazaire’s history, cutting-edge biology and pulsing rhythms orchestrated in an organic and poetic vital flow. Out of this virtuoso game of interlocking, collision and sequencing emerges a nagging question that has guided the artist’s recent investigations: through what forms does humanity successfully grasp reality?

/\/\/\
/\/\/\
What is hidden behind this enigmatic title of six forward slashes and six backslashes? Has Haroon Mirza coded his message in ASCII ([aski:]), an information coding standard that appeared in the US in the 1960s?
That would be a red herring; the zigzag form in fact relates to astrology. It is the typographic interpretation of the sign of Aquarius, the water carrier, and translates an undulating movement as a geometric version of a wave. Here, the artist is referring to the Age of Aquarius, characterised by the importance of progress, scientific thought and critical reason. According to some astronomical calculations, the great periods of our history are determined by the alignment of the sun with one of the constellations of the zodiac, each ‘age’ lasting around 2160 years. So we would now be at the point of leaving the Age of Pisces, a period dominated by religion and belligerence, and entering the Age of Aquarius, which is characterized by the importance of progress, scientific thought, critical reason and which would be an epoch of rediscovered harmony.
These very ancient beliefs—astrology dates back to Babylonian times—flirt strangely with some scientific data: in the current state of our knowledge, the idea has emerged that everything could be modelled in wave functions or forms. From DNA to particles, waves are the means through which we perceive reality. Could contemporary thought be unconsciously influenced by the predictions of those great astronomical upheavals? Did our ancestors have an intuition of the age of waves?
With this laconic symbol of a title, Haroon Mirza draws the straight slopes of a landscape and affirms his position as an artist: disruptive, speculative and poetic, often mixing several fields of knowledge and discouraging all hasty interpretation.

AN ANECHOIC CHAMBER
Within the colossal site of the LiFE, Haroon Mirza creates a small closed room, troubling to say the least: an anechoic chamber – also told deaf chamber -, lined with acoustic walls covered in foam. Within this soundproof box the artist presents an immersive experience centred on a fountain that draws its water directly from the port basin extending beneath the floor of the LiFE. The artist discreetly calls on the memory and the energy of the reclaimed space, reviving the aquatic presence that became invisible when the submarine bay changed function. The jet of this fragile and modest fountain appears inexplicably frozen in the form of a double helix, evoking the modelling of a DNA sequence. From a technical point of view, this optical illusion is created by a dual action: a bass speaker emitting very low frequencies and intermittent LED lighting used to provoke a strobe effect and refold the temporal spectrum. Through the rather dazzling construction of an equation, the artist has interlocked these different materials—sound, light, time, water—to reveal an image of genetic information, the biological macromolecule present in all living cells. Haroon Mirza, the magician of interference, again questions our capacity to perceive the laws that regulate life, between microcosm and macrocosm, between the intangible and the visible. He routes the application of this new philosophy of lights and sounds through the senses; the visitor’s body is being considered as the essential vector and receptacle of experience.

EMERGING PARADIGM
In 2015, Haroon Mirza developed a custom-made tool that he named Emerging Paradigm, a title that makes an explicit link between technological innovation, the invention of new models of thought and the discover of previously unconsidered perspectives. At the LiFE, this machine allows for the synchronisation of four videos and eight audio source channels: a kind of hybrid mixing desk simultaneously integrating moving image, sound, and light, the last of which is materialised in ribbons of coloured LEDs. The device is capable of real time production, which provides an experience close to performance. Haroon Mirza appears to give life to a great technological body that becomes animated, speaks, and sends correlated visual and sound information. Let loose over time, the exhibition plays upon different moments of perception of the same phenomenon, and a sensible, intelligible form emerges from an assemblage of scattered information: a space to perceive the previously unheard and invisible. On the rear wall of the anechoic chamber and on three high screens suspended at an angle, Haroon Mirza orchestrates a multiplicity of projected images. They share a common aesthetic—raw, banal, low definition— of videos captured on a smartphone or extracted from videos diffused on YouTube. These fragments are the material that the artist co-opts to recount our exploded non-linear world, perceived and digested through the Internet. The videos are about very diverse subjects; set in relation they offer a grasp of the complexity of reality, the noise of the world.

THE RUSTLE OF LANGUAGES
The key to the exhibition, its structuring concept, is hidden within the mass of information. Haroon Mirza adopts a philosophical hypothesis already formulated by Wittgenstein: incomprehension as an alternative source of comprehension. In the content of his videos he calls upon at least three different languages, none of which is translated. He also adds a text that might look like a text translated into English, but is in fact a text actually written in English by Timothy Leary, clinical psychologist and author of The Psychedelic Experience. Haroon Mirza has reordered the words according to their frequency and in the images this new textual material is performed by two musicians, prestigious guest stars from the rock and post-industrial scene: Nik Void of the group Factory Floor and Tim Burgess of The Charlatans.
Translation or lack of translation, transposition and interpretation: the artist is affirming that the ensemble of his work approaches language as a sound tool rather than as a means towards unequivocal comprehension, as a medium that never vehicles a message with a unique meaning. This idea appears profoundly political at a time when Western civilisation is engaged with extreme right wing ideological movements that use media propaganda and misinformation on the Internet and social networks to disseminate the fear of the unknown and hatred of the other on a daily basis. Actions speak louder than words: Haroon Mirza goes even further and suggests that language itself (spoken and written) does not succeed in being a clarifying tool but easily becomes an obstacle, in politics as in science.
In the profusion of the composition, the artist acts exactly like the conductor of an orchestra: he assigns an initial theme to each screen (nature, science and technology, psychotropic drugs and politics1), mixes the sources and re-encodes certain images, which then appear as landscapes invaded by glitches, random pixellations caused by electronic or electric imperfections. With this play of combinations and sequences, the question of rhythm converges on the one of loop – visual and sonorous -: leitmotif of this undervoltage work. The interaction of haunting images and amplified sounds, worked on as musical material, forms a synesthetic whole with a thrilling physical impact—a metaphor for our civilisation’s augmented reality.

OPEN DOME
While in Saint-Nazaire, Haroon Mirza became interested in the radome (from radar and dome) placed on the roof of the submarine base. The radome once housed a NATO radar, and, in an eminently symbolic gesture, was lifted from the Berlin Tempelhof airport and offered to the town of Saint-Nazaire by the German Ministry of Defence. It originally sheltered the antenna from bad weather and/or prying eyes, concealing its orientation for and from eavesdropping and communications interception. Its geodesic form is the creation of Richard Buckminster Fuller; his self-supporting architectural form has, since its invention in 1947, been used by public buildings, protest camps, military radar installations, games for children, exhibitions, observatories, and even a hippie village called Drop City, an artistic community that Fuller commended for their ‘poetically economical’ dome housing. A forerunner of modern ecology, Fuller drew inspiration from nature to perfect his reticulated shell, as well as the astronomical and optical research of the German Walther Bauersfeld.
Haroon Mirza was keenly aware of all these references, which elevate the radome to the status of an architectural palimpsest and make it an ideal vessel to travel across different temporalities. The artist replays its form at the LiFE, as a kind of vintage ready-made, but he leaves it unfinished in mid-process of evolution. With this, the two architectures that punctuate the exhibition (conceived in collaboration with Francesca Fornasari) are opposed to each other: one is closed on itself (the anechoic chamber), the other is wide open (the radome).
Inside the open radome, Haroon Mirza concentrates all the sound sources of the exhibition, whether they come from videos, the DNA fountain or the electrical signals of the LEDs. As the locus of intensified light and sound, crackling with electrical flashes, the installation provokes as much as it captivates—like repetitive music, it suggests sensory disruption and trance. The architecture opens onto a sky of sound, liberating an energy that fills and covers the space. A melody resonates in echo, that of a shaman glimpsed in a video chanting icaros, sacred songs that serve as energy vehicles to access other worlds. Haroon Mirza’s universe now comes together and reveals itself in all its holistic power: it advances a new sensory equilibrium rooted in particular philosophical visions—propositions such as Marshall McLuhan’s global village, Buckminster Fuller’s Spaceship Earth or the Gaia hypothesis of James Lovelock2. This exhibition, like an experimental super-organism conceived in the image of the world, engages us in what is, in sum, a total project that revises schemes of thought, politics and ecology, science and esotericism.

Notes:
1  More precisely, Haroon Mirza evokes DNA and the relationship with whole genome sequencing, information technology and artificial intelligence, the wave-particle duality that constitutes one of the foundations of quantum mechanics, the nature of entheogens, those psychotropic plants used for spiritual or shamanic purposes, and also the rise of fascism and extreme ideologies.
2  All have offered the hypothesis of a more self-conscious Earth, anchored in the thinking of Pierre Teilhard de Chardin and the noosphere, a kind of ‘collective conscience of humanity’ that brings together all the cerebral and mechanical activities of memorisation and the treatment of information.

Born in 1977 in London where he lives and works.
The artist is represented by Lisson Gallery.