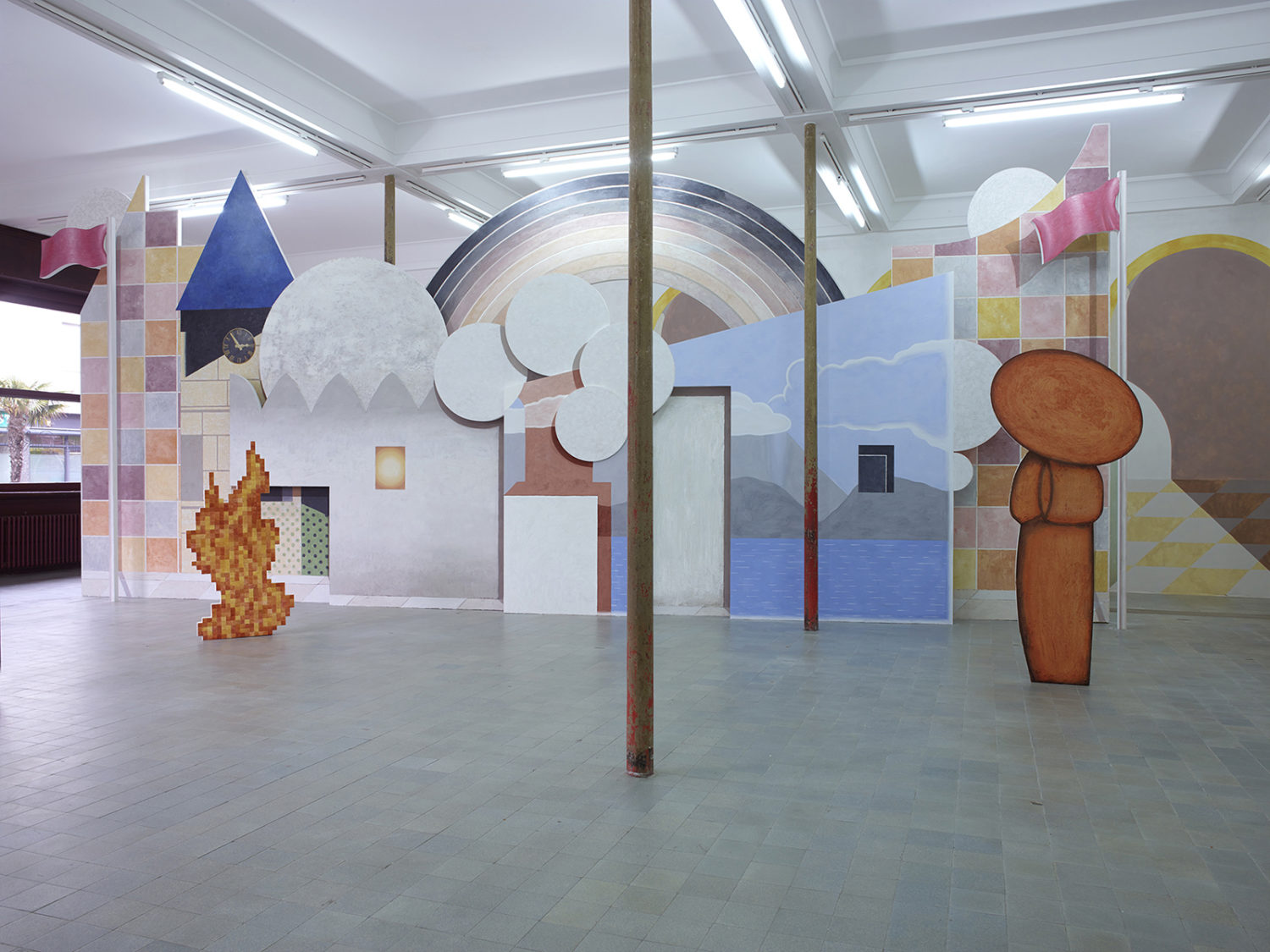 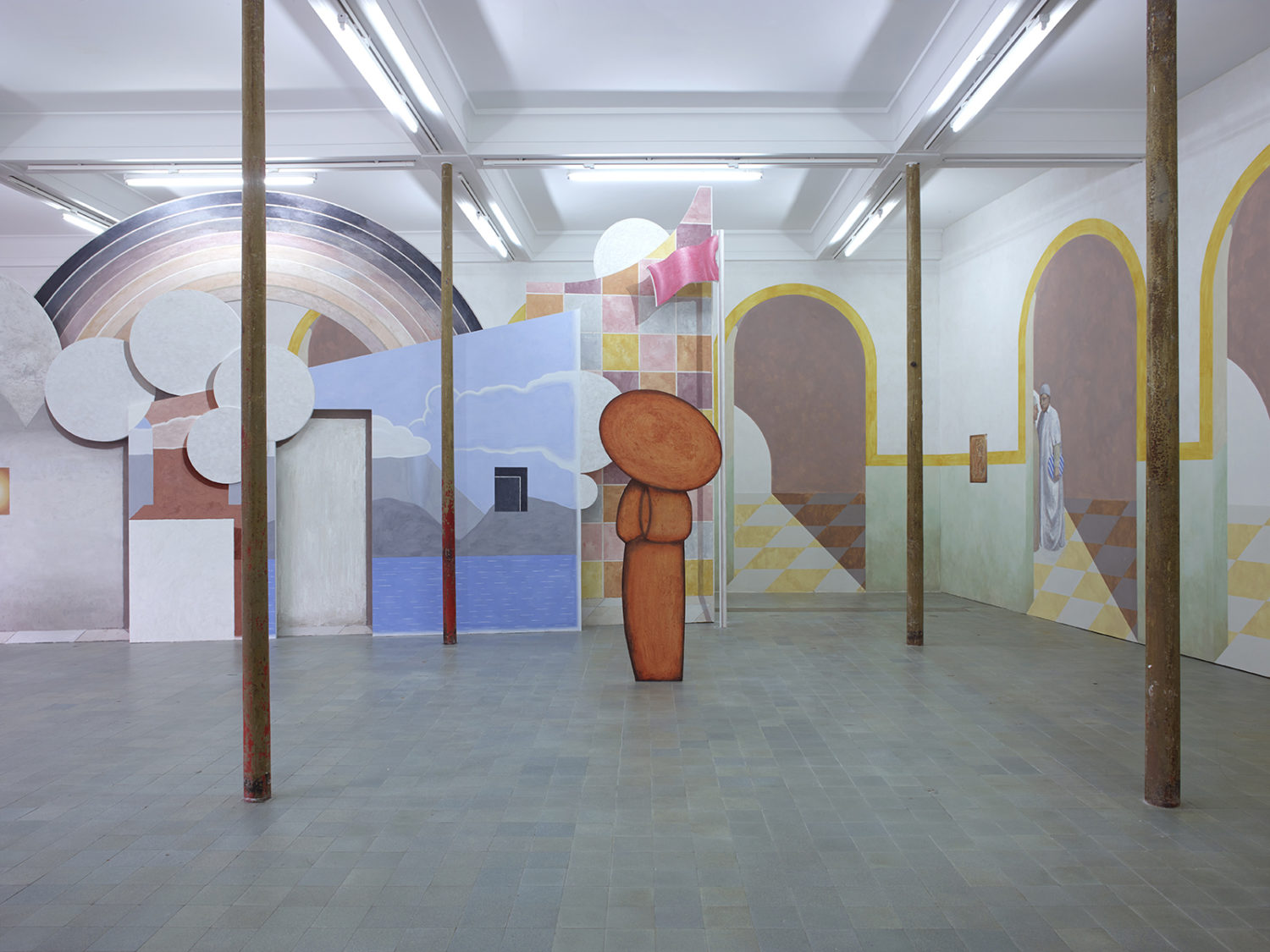 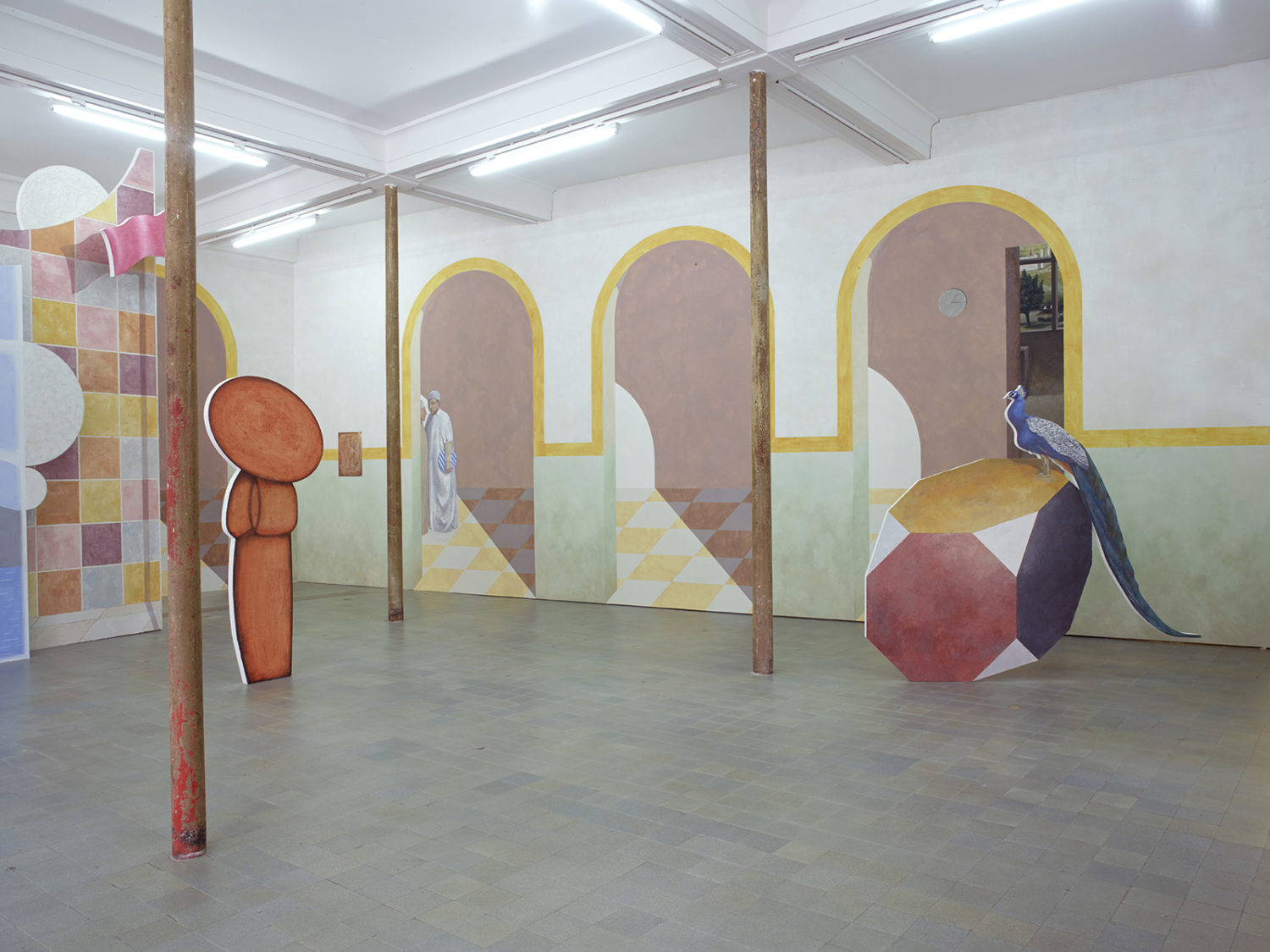 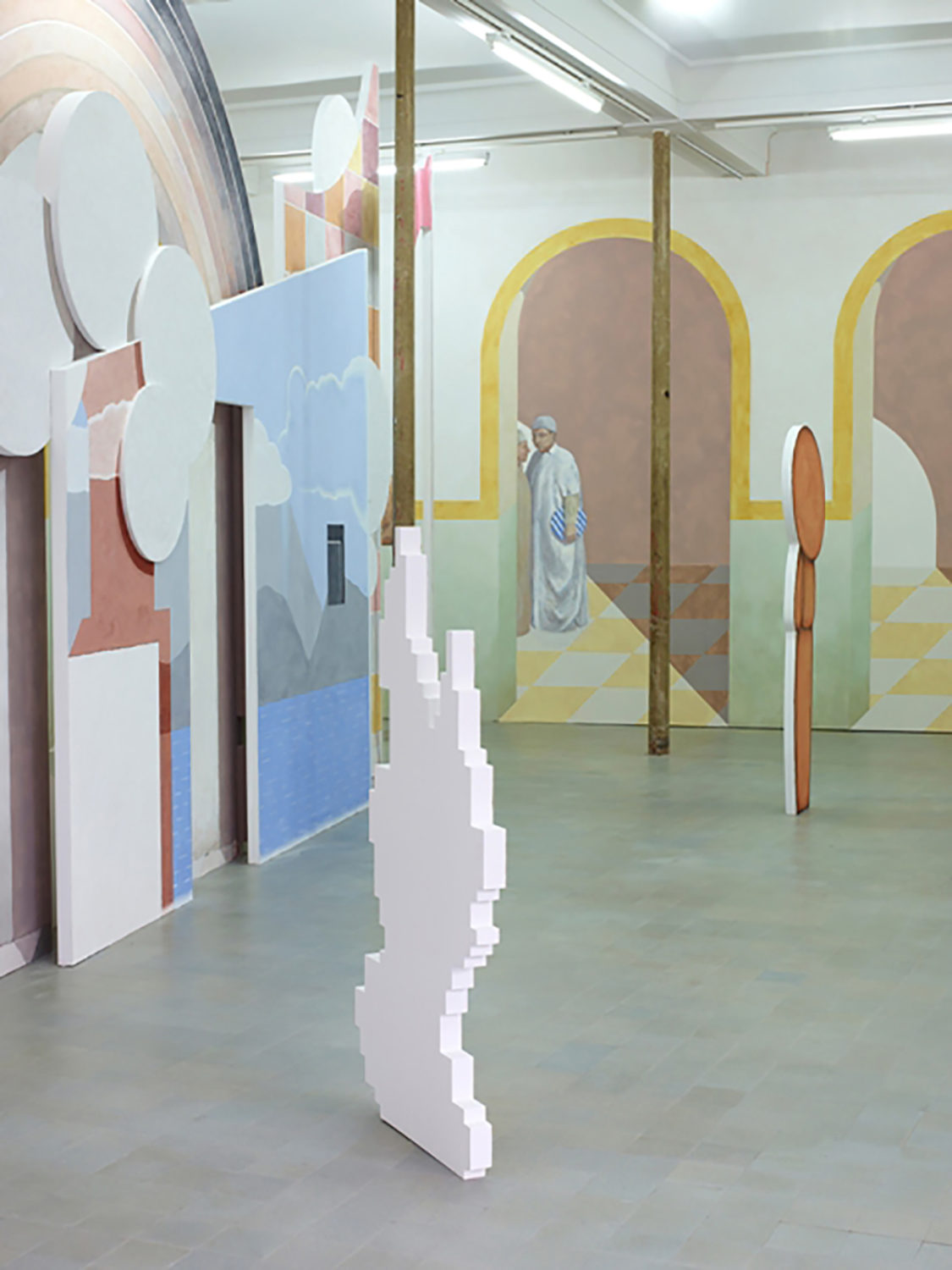 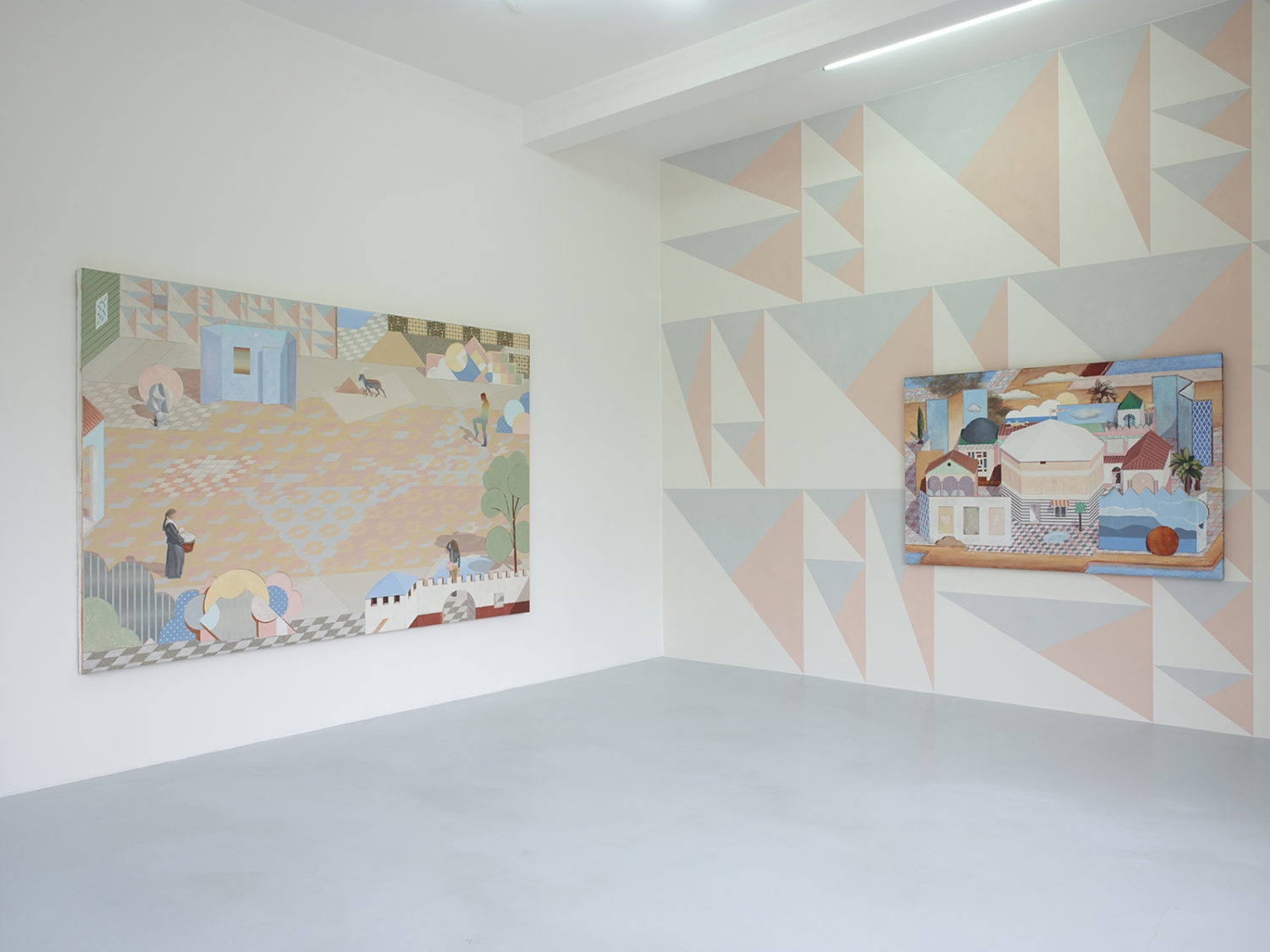 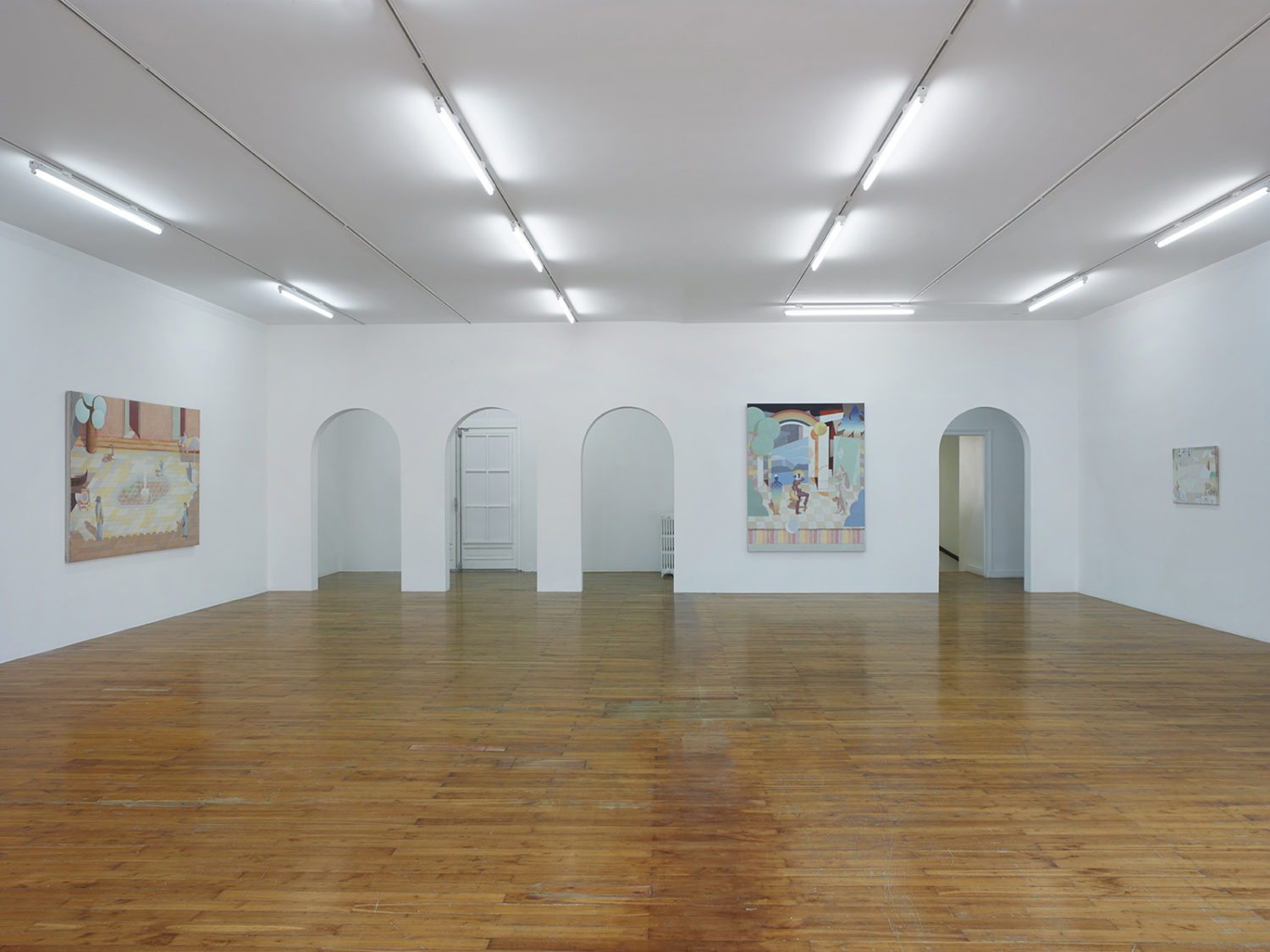 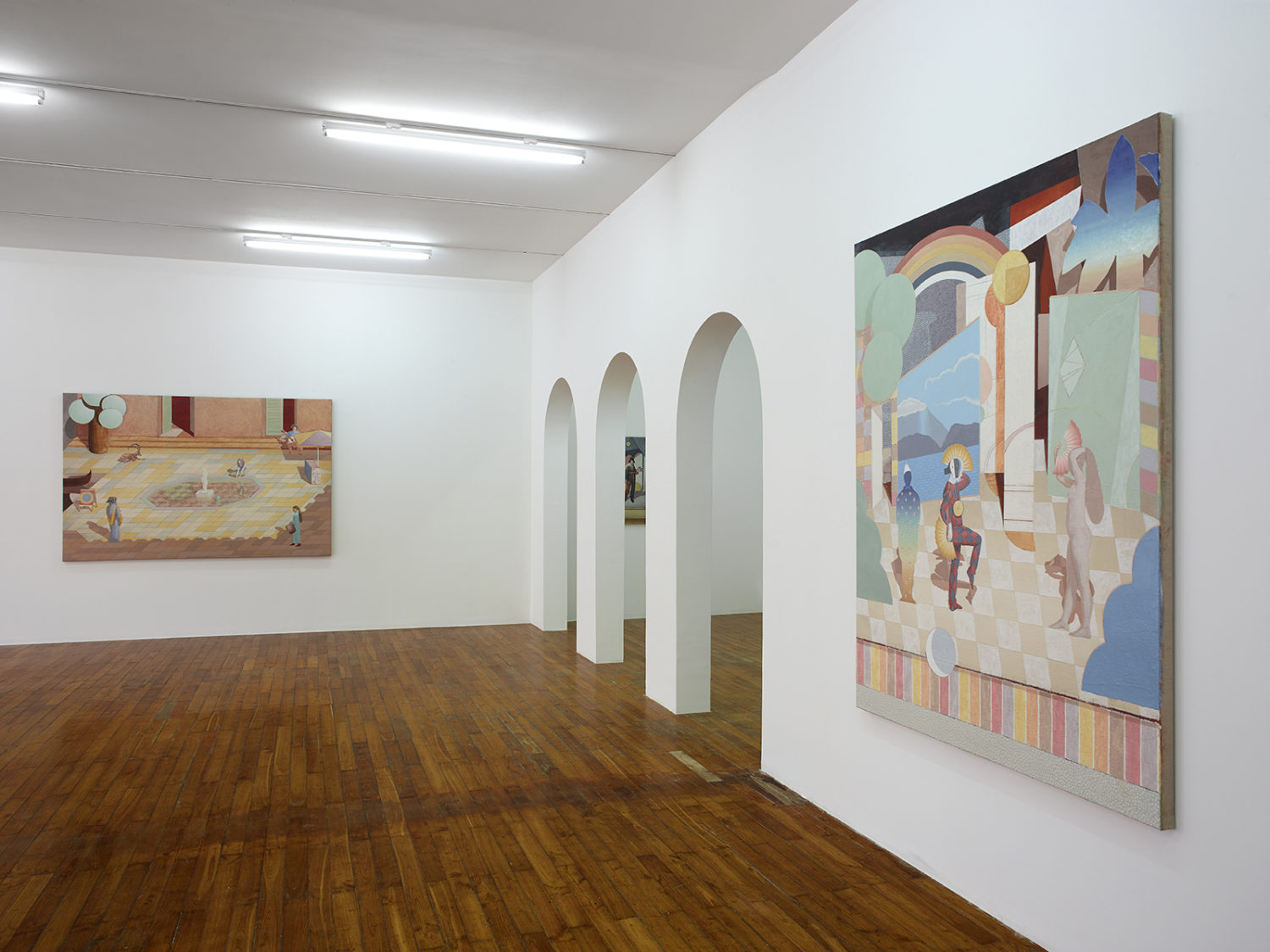 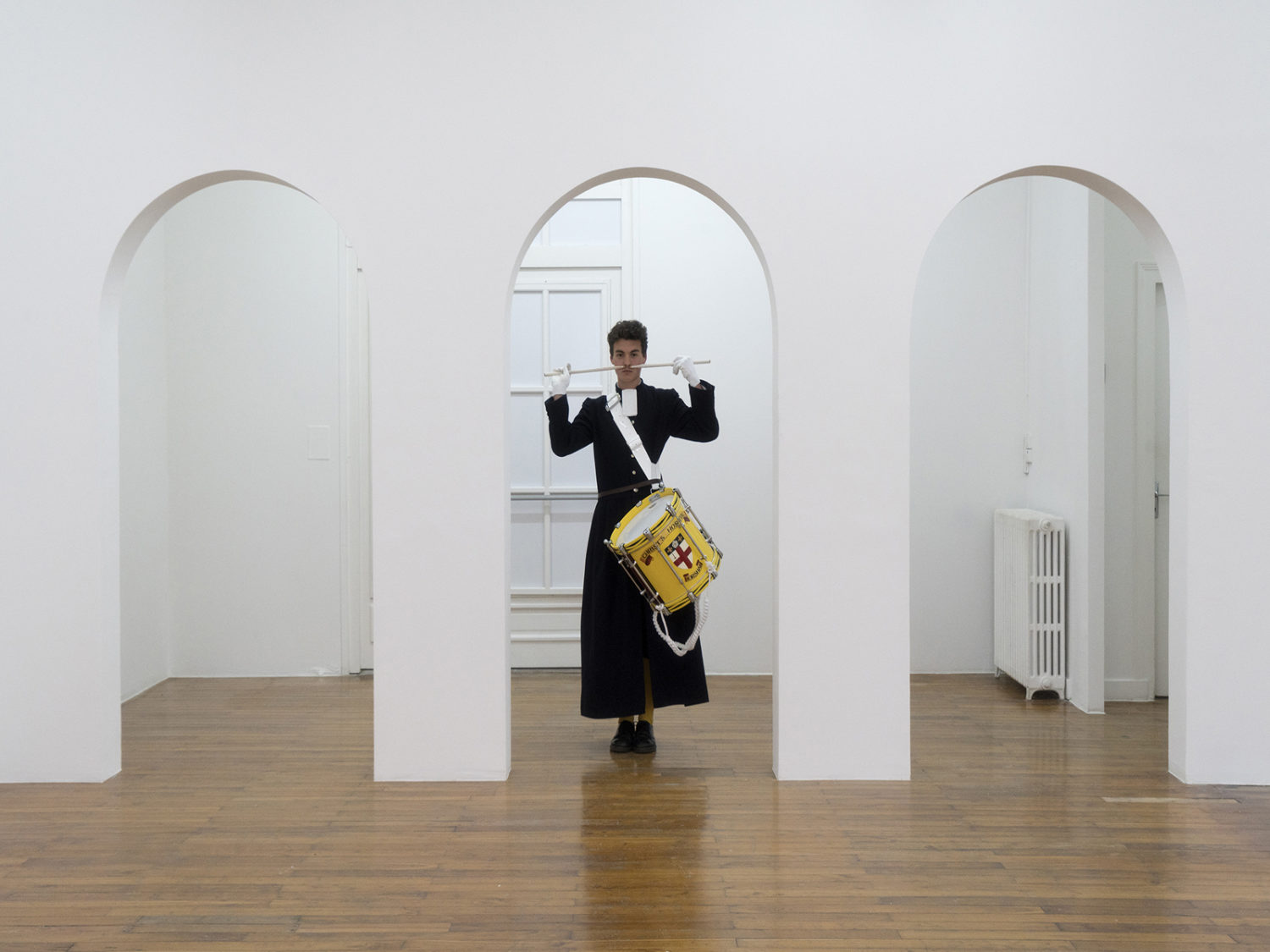 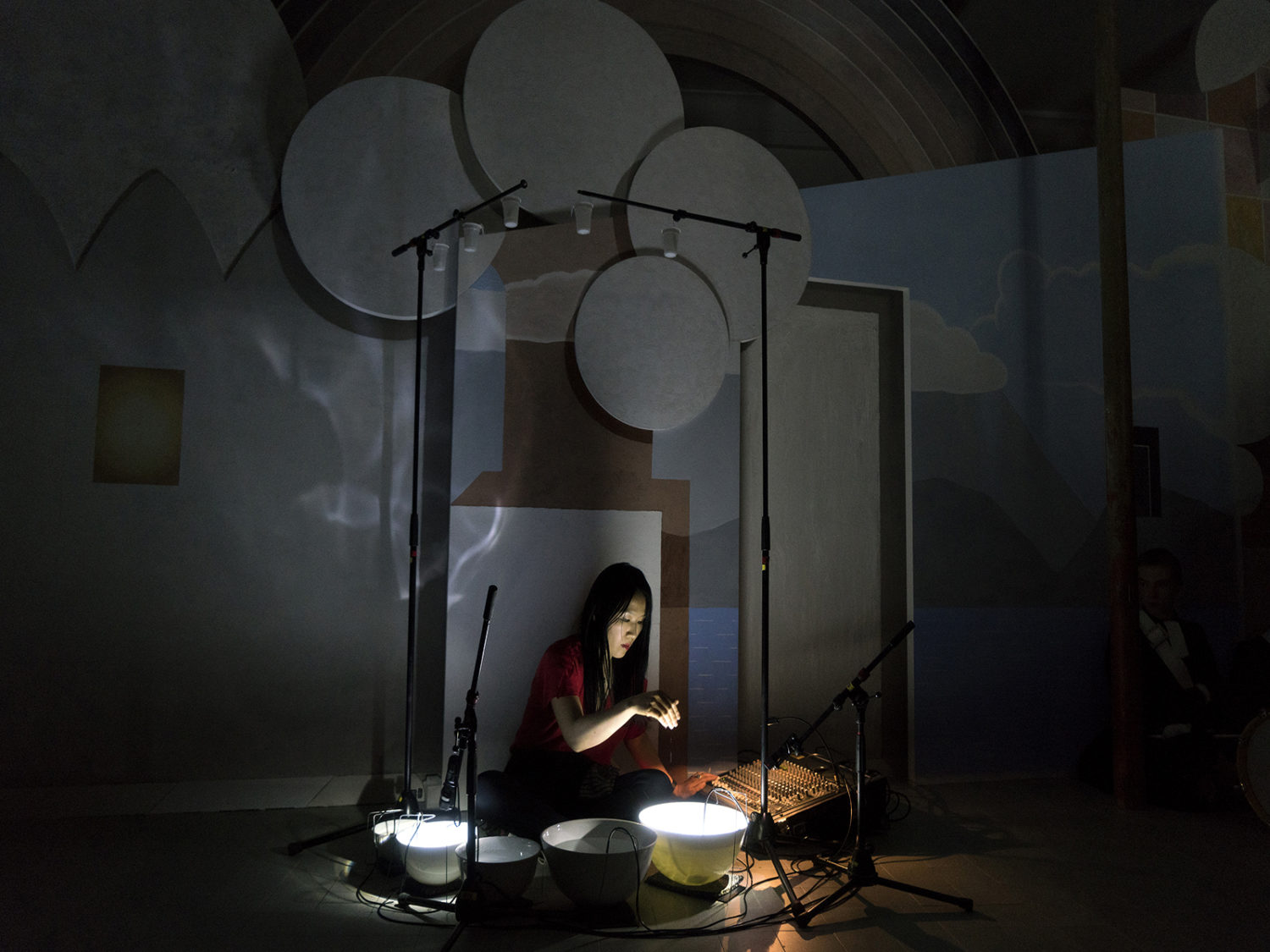 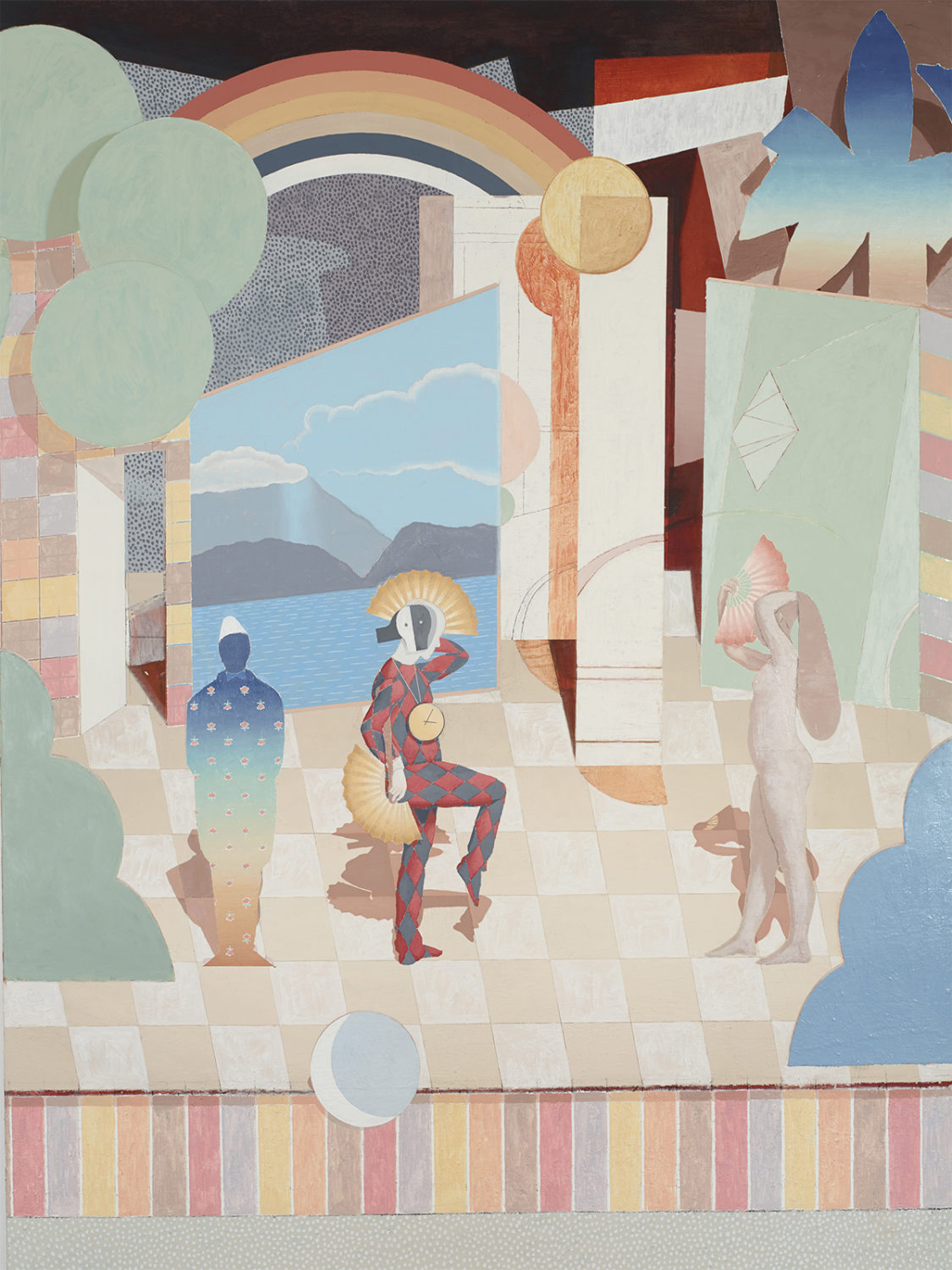 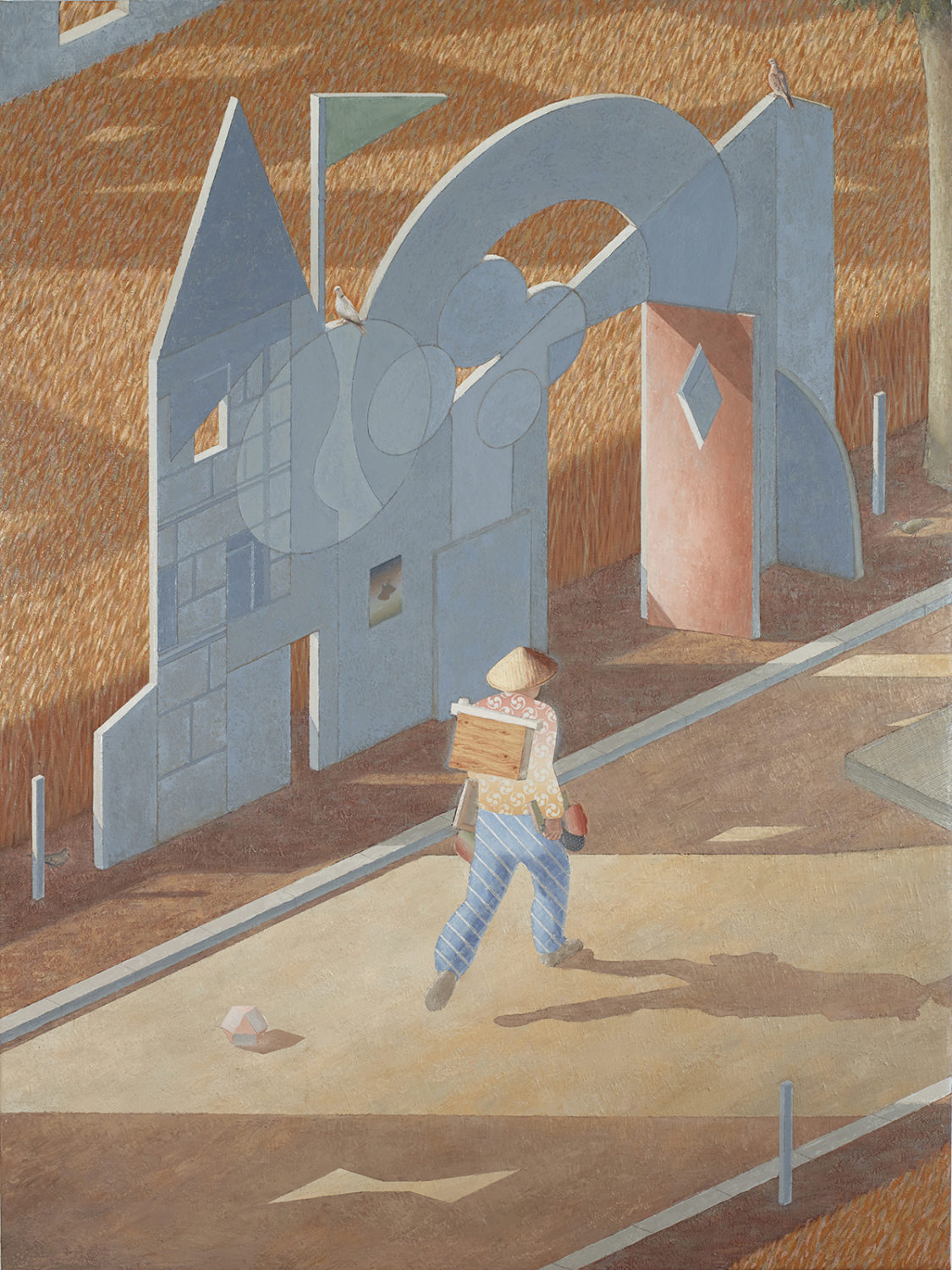 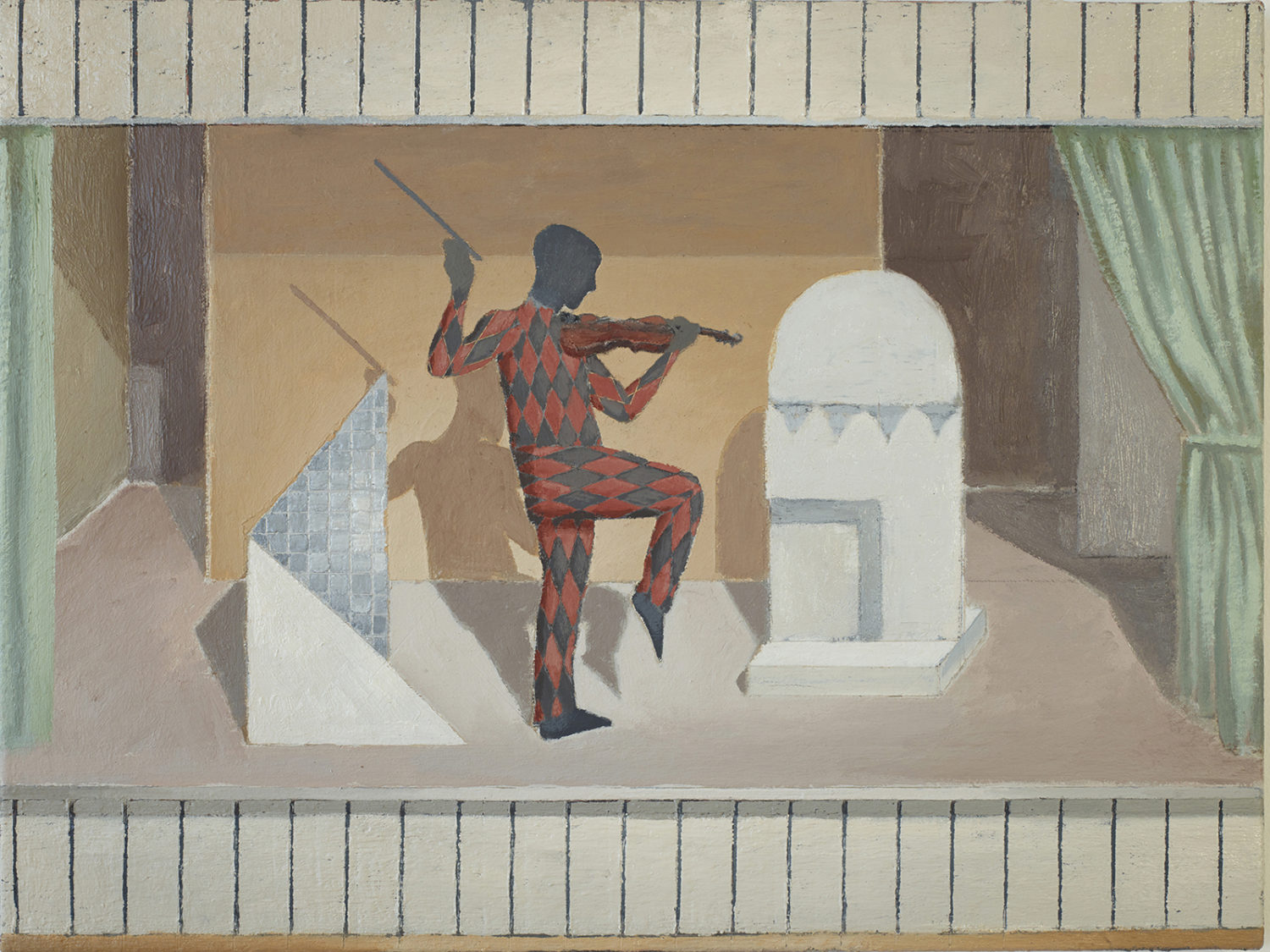 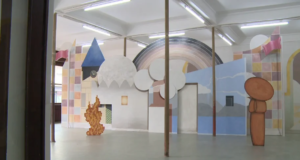 Riddled with references and enigmas, Christian Hidaka’s work is a uniquely graceful journey through the history of painting, revealing an interpretation of it that is cerebral and sensual in equal measure.

The artist investigates the language of figuration and the representation of the picture plane. His work attempts a synthesis of two reference points: on the one side Renaissance painting, influenced by Euclidian geometry and the structure of the frame; on the other the limitless development of space and absence of a vanishing point, which we find in ancient Chinese calligraphic landscapes or in digital space.

His latest series of works, presented in part at the Michel Rein gallery in 2015 and enlarged for this exhibition at Le Grand Café, continues to explore constructed space. In Saint-Nazaire, the artist is experimenting with a new form of spatial language, opening his painting out into three dimensions. In the large ground-floor room, he uses the entire space to develop the elements of a recent painting called Trobairitz, which acts as the backdrop to the exhibition. The pictorial proliferation carries over into the smaller room, where Christian Hidaka multiplies the perceptual games between the canvas and its extension onto the wall surface. This profusion contrasts with what is shown on the first floor of the art centre: a stripped-down hanging that takes stock of the artist’s imagery. Presented within a specific architectural arrangement, canvases are placed here like talismans, triggers for visions, as proposals for various theatrical settings.

The word Trobairitz designates a female troubadour, the Provençal word trobar signifying both to find and to compose. A character that recalls the troubadours of Italian painting and Picasso’s Harlequins, dominates the centre of the canvas displayed on the first floor. For Christian Hidaka, Harlequin personifies the theme of non-linearity and this one brings together several layers and several registers of representation. His body in itself is an incarnation of re-reading as a temporal and stylistic collage.

The canvas has an affinity with the art of memory (ars memoriae), also known as the method of loci or method of places. This is a mnemotechnic procedure practiced since Antiquity, which is based on remembering already well-known places and associating them, by various means, with the elements that one wishes to memorise. Trobairitz would have a similar function: an assemblage of linked spaces, like enigmas1. The composition reads as different rooms in the same mental building in order to ask the question: How to synthesise ‘flattening’ with pictorial ‘depth’?

Symbolic elements, treated as forms without depth, orbit weightlessly around the Harlequin-troubadour: a tree borrowed from Matisse, a pixelated burning bush, a geisha, a peacock on a polyhedron and characters that recall the Italian Renaissance. The artist expands the structure of pictorial space with pavements, arcades, and fragments of architecture treated like interleaved strata in a décor. A number of repeated motifs catch the eye: the grid, the circle – like a metaphor for the life cycle – and finally the shadows scanning across the ground. The artist also makes use of time: a tempo is set by the echo between two clocks2, while a small tortoise, an animal known in China as an allegory of the world, passes in the foreground.

A rainbow at the back of the scene recreates the tetrachromatikon. This system of colours, invented by the Ancient Greeks and adhered to by the great masters of the Renaissance, uses just four pigments as a base: red earth, yellow earth, white and black. Picasso would explore this technique of colour mixing all his life, developing it in a very personal manner. Christian Hidaka follows the Spanish master in revisiting the dynamics of the warm, luminous tetrachrome palette, using, in this case, a mixture of oil and tempera.

In extending this version of Trobairitz into the space of Le Grand Café, Christian Hidaka alters a key element of the original canvas: the main character of the composition, the Trobairitz, has gone missing. This gives the exhibition title, Desert Stage, its full meaning. The space appears to be waiting, standing by between two acts without its principal protagonist. Thanks to this absence, the visitor is completely free to become an actor in the composition, to invent herself or himself as the prospector in a pictorial fiction, and to circumambulate the cloisters with the theatrical backdrops.

For this work, Christian Hidaka immersed himself in the theatre. The artist is fascinated by a number of Renaissance paintings—such as The Dormition and Assumption of the Virgin, by Gerolamo da Vicenza—that used a new approach to pictorial space to represent outdoor theatrical events3. He is equally inspired by the first collaborations between modern painting and theatrical performance, in which Dada and the cubists were key players; by the openness of the stage in Japanese Noh Theatre (in Hidaka’s painting, Pergola) and even Robert Fludd’s use of Shakespeare’s Globe theatre as his own mnemotechnical device, thereby connecting theatre, memory and talismanic images.

As a result the exhibition at Le Grand Café explores the possibilities of a symbiotic two way movement: how does the theatrical event inform representation and how does representation in turn re-inform the theatrical event? The artist ventures to engage with an inquiry into what types of pictorial space might be appropriate for today without recourse to other already existing modes, such as photorealism and expressionism. Christian Hidaka suggests to us that oblique projection might offer a ‘provisionality’ not offered by other pictorial modes used by contemporary painting.

Enlarging the concept of painting to the notion of scenic space is not unique to Christian Hidaka: one thinks of Jim Shaw’s baroque staging, the theatrical structures of Ulla von Brandenburg or Karina Bisch, as well as Paulina Olowska’s tableaux vivants. Christian Hidaka proceeds differently however, as if cutting up a painting with a scalpel to lay it out, almost scientifically, in space whilst resisting the urge to break the formal boundary of representation. The aim here is to extend the boundaries of representational painting’s lexicon rather than to dispel it.

At Le Grand Café, he is activating the points of view onto the pictorial space, arranging an access to the other side of the mirror, an elsewhere populated by suspended surfaces, supplemented by views onto walls. This is a painting of thresholds, close in some respects to the metaphysical canvases of Giorgio De Chirico, and into which the public is invited to enter.

Theatre of imagination and memory, the exhibition also relates to certain digital environments, immersive landscapes where all is flattened, weightless, dematerialised. Christian Hidaka invites the public to walk around this vast display as if wanting, like Brecht, to break through the fourth wall4 and to reinforce the links between theatrical actions and pictorial perception.

Desert Stage is also a chance for the artist to give free rein to actors, performers, musicians and dancers who will open up perspectives on a universe where experience and painting coincide.

Notes
1 – Those enigmatic symbols function as talismans. They are not there for their own sake, but are part of a quest to find a new pictorial space through examining other ’non linear spatial affinities’: Cubism, painting of the Italian Trecento and Ancient Chinese painting.
2 – The clocks here are inconsistent; one of them is at 2:54 and the other is at 3:06: for Christian Hidaka time in oblique projection might be inconsistent as opposed to time in a picture that has a vanishing point, which in effect fixes the viewer in space and time.
3 – Those outdoor theatrical events were themselves devised by painters, effectively allowing them to examine their pictorial inventions in 3D.
4 – The expression «breaking the fourth wall» refers to stage actors directly addressing the audience, and, later, to cinema actors doing the same via the camera. This rupture figures among the principal distancing effects theorised by Brecht: direct audience-address, placing actors in the audience, visible scene changes, etc. —methods that disrupt the implicit pact of belief and produce a strong effect of unfamiliarity.

Born in 1977 in Noda (Japan).
Lives and works in London.
The artist is represented by Galerie Michel Rein (Paris and Brussels)