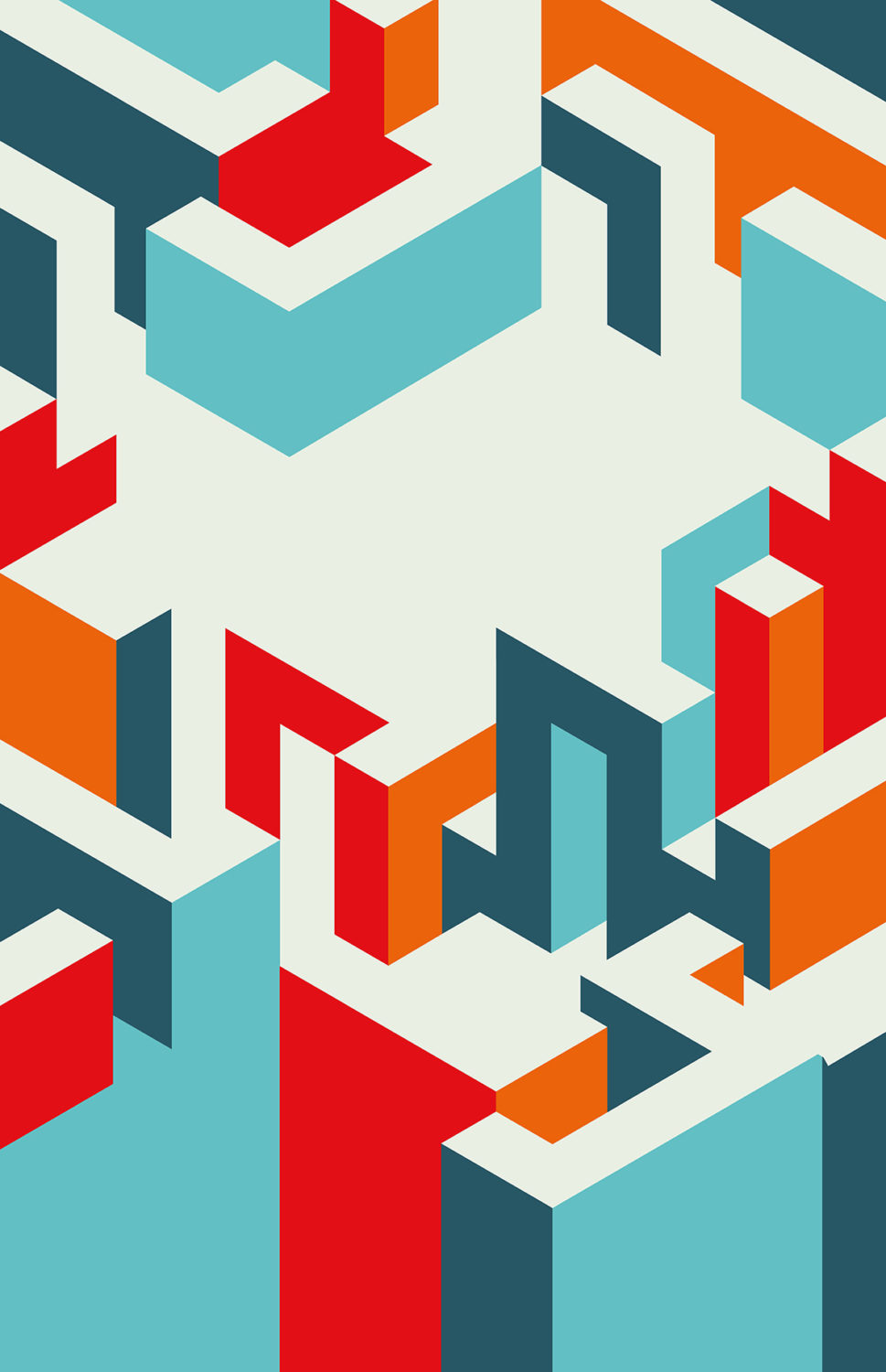 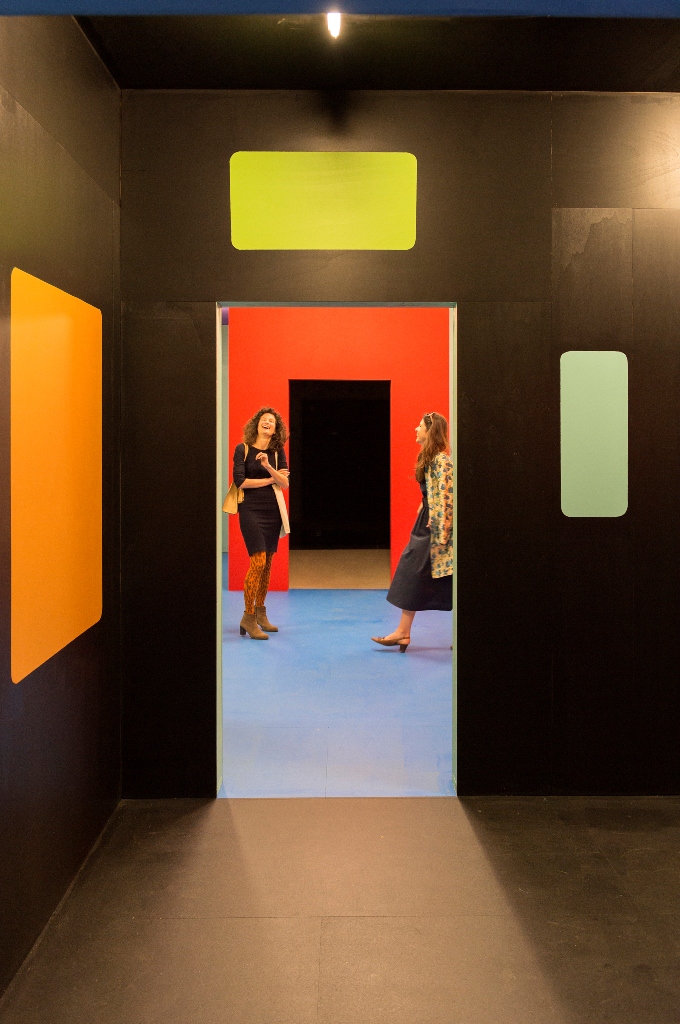 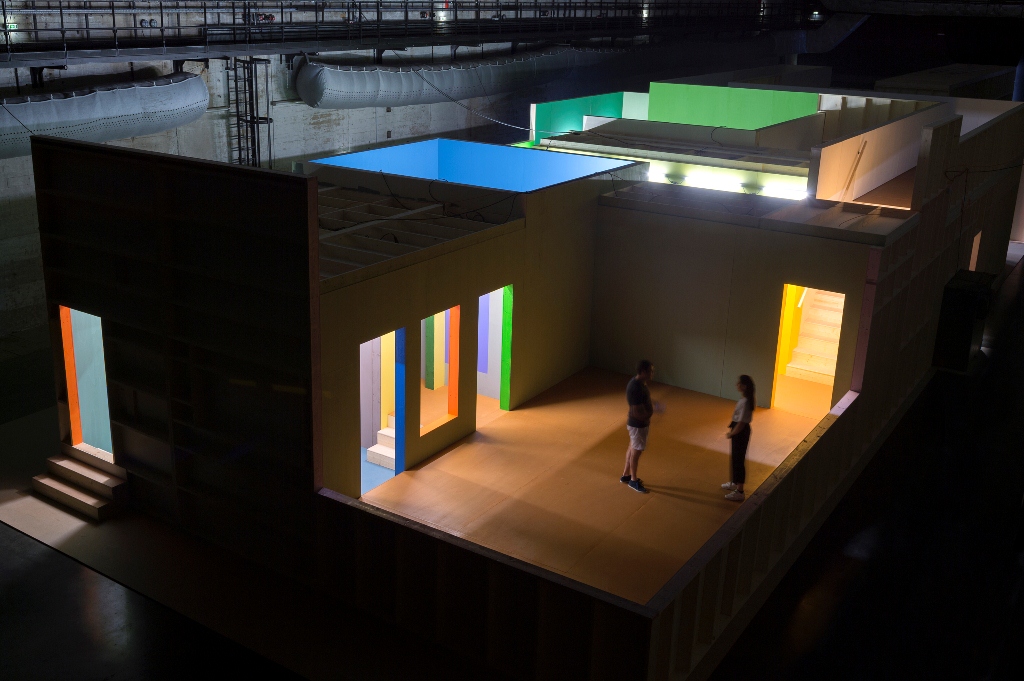 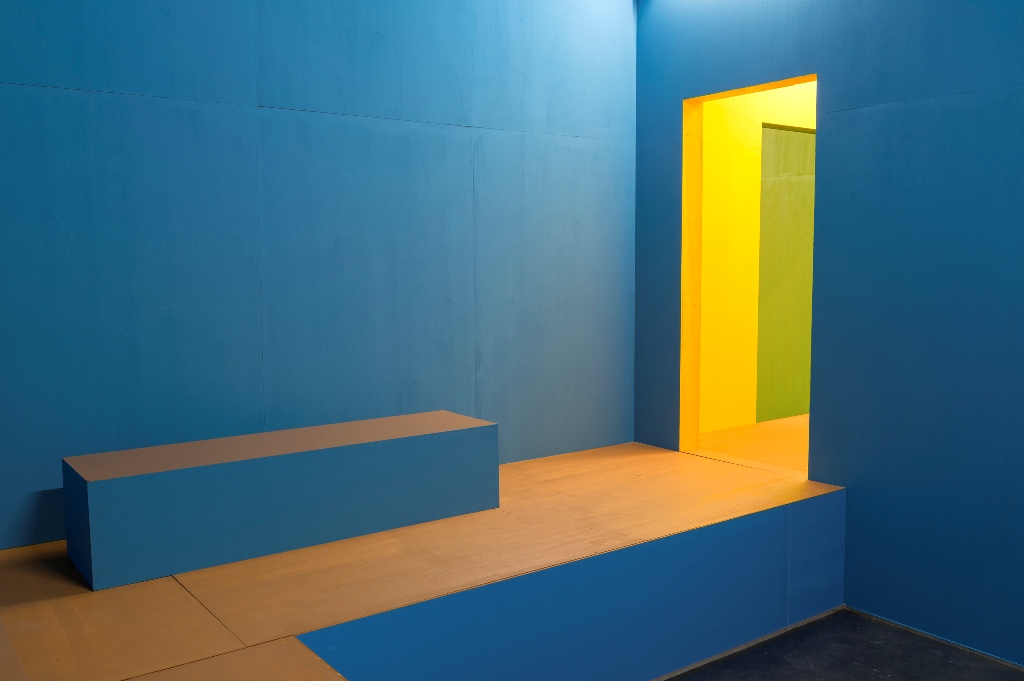 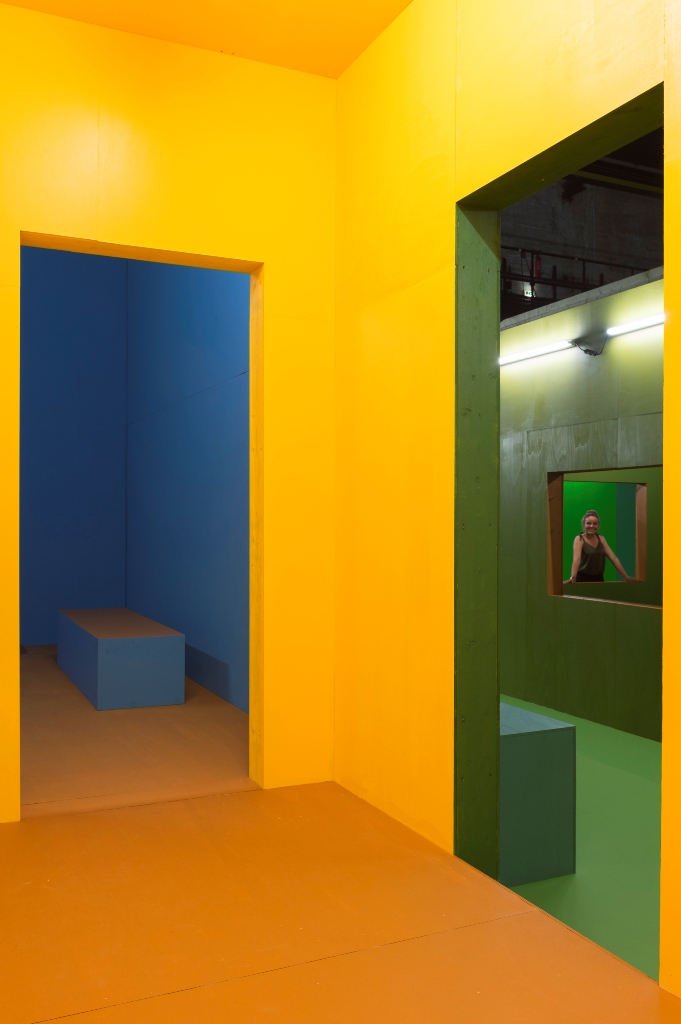 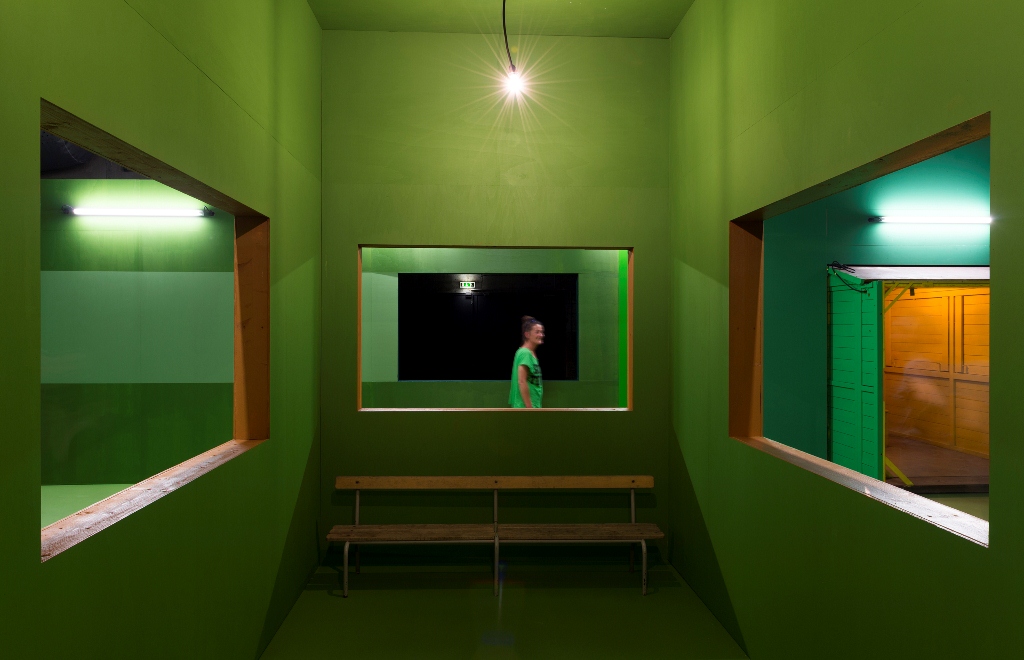 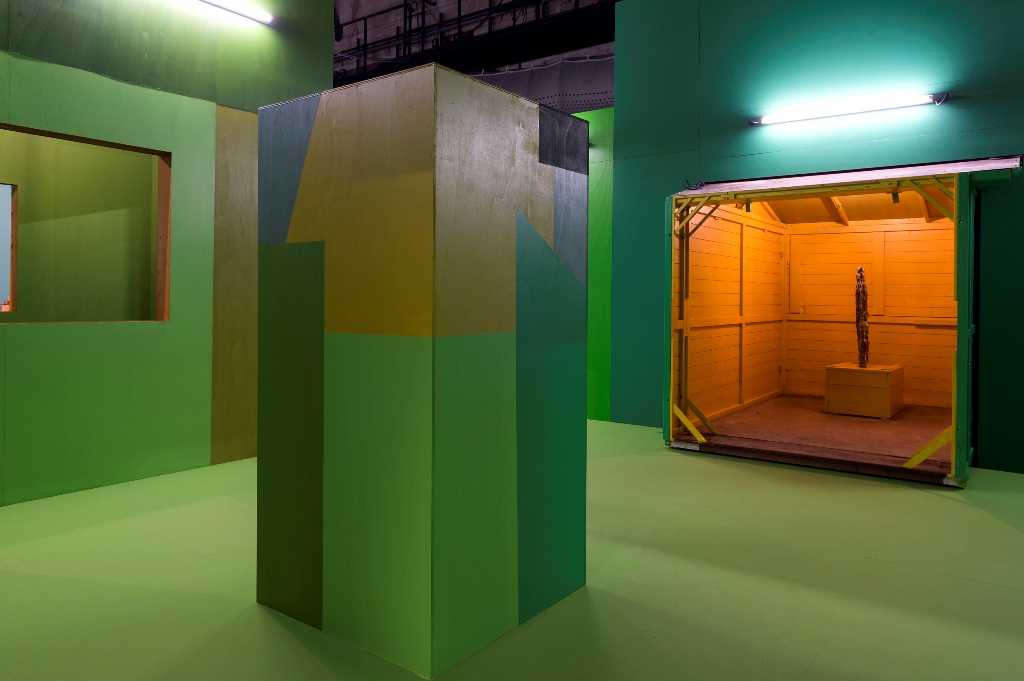 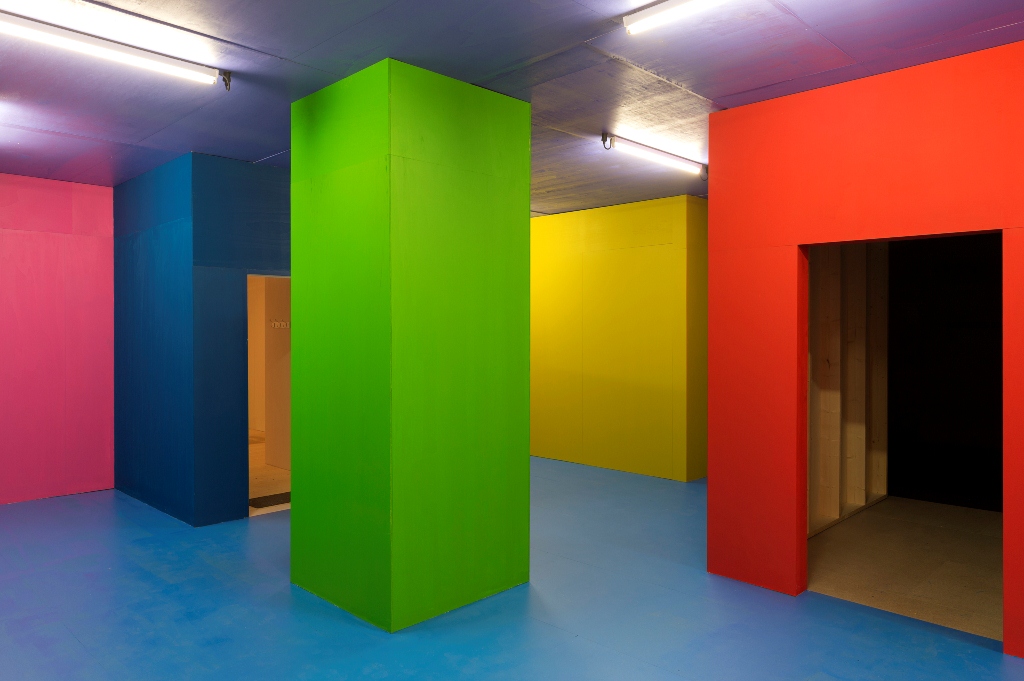 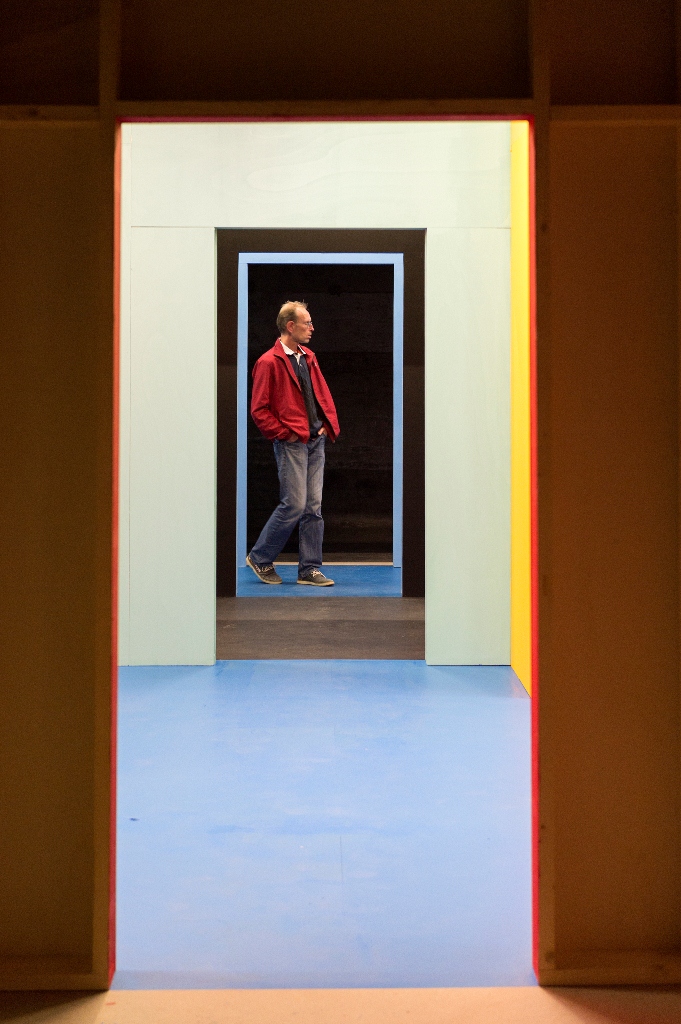 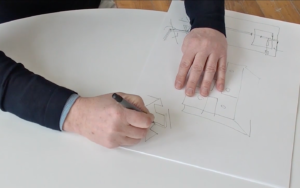 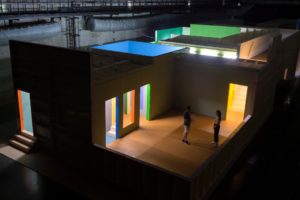 ‘In this manner, we are told, the system of the imaginary is spread circularly, by detours and returns the length of an empty subject.’
Roland Barthes, Empire of Signs

In his exhibitions in France and elsewhere, Krijn de Koning is remarkable for the perfect balance between his sculptural productions and the sites that he works with. A continual dialogue with the specific identity of a place allows him to construct a form that resembles a blurring of perspectives and boundaries. Whether immersing himself in an urban space or in a landscape, in an industrial site or in historic architecture, in an art centre or in a museum, he brings about the possibility of physical experience and an understanding of environment through the body.

Truth or Dare
His preparatory method is relatively constant: he surveys the space, makes notes, feels for its strengths and its weaknesses, the texture of its surfaces, its volumes. He defines himself as a draughtsman, making a large number of sketches and using a scale model to interpret his project. When Krijn de Koning was asked to consider the architecture of the Saint-Nazaire submarine base and the ways that it is perceived, he worked in the same manner and made an initial assessment: while the base is architecturally fascinating, possessing a stimulating ambiguity, the LiFE is not. The base is immediately forgotten, and the space is reduced to a box revealed in a single glance: a hole or a void. Did the renovation of this immense volume contribute to a reduction of the original architectural power by disconnecting the fragment from the whole? Following on from this observation, the artist explored the question of the truth of this space, playing with a sort of fictional reconsideration and leading the public into a walk through performance.

Passage
The monumental installation begins outside the LiFE, from the street within the submarine base: Krijn de Koning upsets our usual perception by creating an access corridor that recalls the routes that have to be followed in large cinemas before reaching the auditorium. The rest of the voyage is unguided: the visitor is offered several possible routes, connecting up to functional elements that create rhythm and measure out space: windows, stairs, doors, passages, openings, corridors… The ground sometimes rises, the ceiling appears, a pontoon weakens the equilibrium, an opening directs our view onto the structure itself, or onto its unmodified brute exterior; any number of strategies that engage critical reflection and the moving body, thrown into a universe with accents of Piranesi. ‘For a work that asks its public to pass through it, art history could look back to Brancusi’s Porte [Door] (1915) as one of the possible origins of this problematic. (…) Krijn de Koning’s objective is to make a work whose principal mode of understanding is this passage.

Time Is A Person
Krijn de Koning often refers to the avant-gardes, to Mondrian, to Russian modernism, to minimalism and to Gordon Matta-Clark. But one of his greatest influences is still undoubtedly Daniel Buren, who for two years was his professor at the Institut des hautes études en arts plastiques (Iheap) in Paris. Both artists work site-specifically, and share a desire to convey the intensity of perception through light, proportions, and interaction with a site, its uses and its perspectives. They both sculpt space with walking and movement. With Des volumes et des vides [Volumes and Voids], Krijn de Koning also demonstrates that he can sculpt time, rather like Lewis Carroll. For Carroll, wonder and marvel always relate to the metaphysical, and in Wonderland ‘time is a person’ who can make pendulums do whatever he likes, while space is endlessly deformed, folding and unfolding as if in a dream. Krijn de Koning’s work uses an almost magical power to metamorphose an environment in a similar way, making it oscillate between reality and wonderland: it is a ‘fable of movement”.

Coloured Partitions
His methods for reconfiguring our relationship to time and space are always closely bound up with the use of colour as a medium for amplifying the senses, and for its ability to make surfaces virtual and to modulate atmosphere. The colours orchestrate rhythmical continuities and ruptures between one part and another, adding spice to a game that is being played out at the intersection of sculpture, architecture and painting. For a long time the artist preferred the primary colours of the modernist tradition; nowadays his palette is more complex and increasingly intuitive, colour is a practical rather than theoretical question. In the first and last rooms he has taken a realistic option, with white walls and a parquet floor. Everywhere else explodes with bold planes of colour, tangible tools for seeing things in another way. These picture-like spaces are lit from the inside by fluorescent tubes while all around the sculpture its architectural volume is bathed in the penumbra.

Intimate Geometry
People and architecture affect one another. By looking for ways to map out the limits of the self, psychoanalysis has often shown us the degree to which these limits are materialised in the spaces of our lives. Krijn de Koning’s sculpture is in turn a playground, a house, a theatrical stage, an instrument of vision or a laboratory, so it imagines precisely this multiplication of its surfaces of contact with the life that passes through it. The artist talks about it as a vast organism, within which each piece would be the metaphor of a precise physiological function connected to the whole. Maybe this vast body’s purpose, mirroring our own constitution, is to digest space? In any case, it tells us more about a recurring theme in Krijn de Koning’s work as a whole: blurring the notions of inside and outside, imagining a reversible space where could ‘be expressed the totality of the ego-world’.

Fragments Of The Real
There are two points at which elements drawn from the reality of surrounding Saint-Nazaire insert themselves into the room arrangement. A military shelter and a shed with an appearance of architectural salvage are abandoned within the historic site. How do reality and its clichés disturb the fictional aspects of the sculpture, and vice versa? Their forceful presences act as reflexive principles, extending the deconditioning activity that Krijn de Koning is carrying out upon ways of seeing, always looking for new physical and emotional passages between different states of conscience, between different timescales, between different volumes and voids.

Born in 1963 in Amsterdam (The Netherlands) where he lives and works.