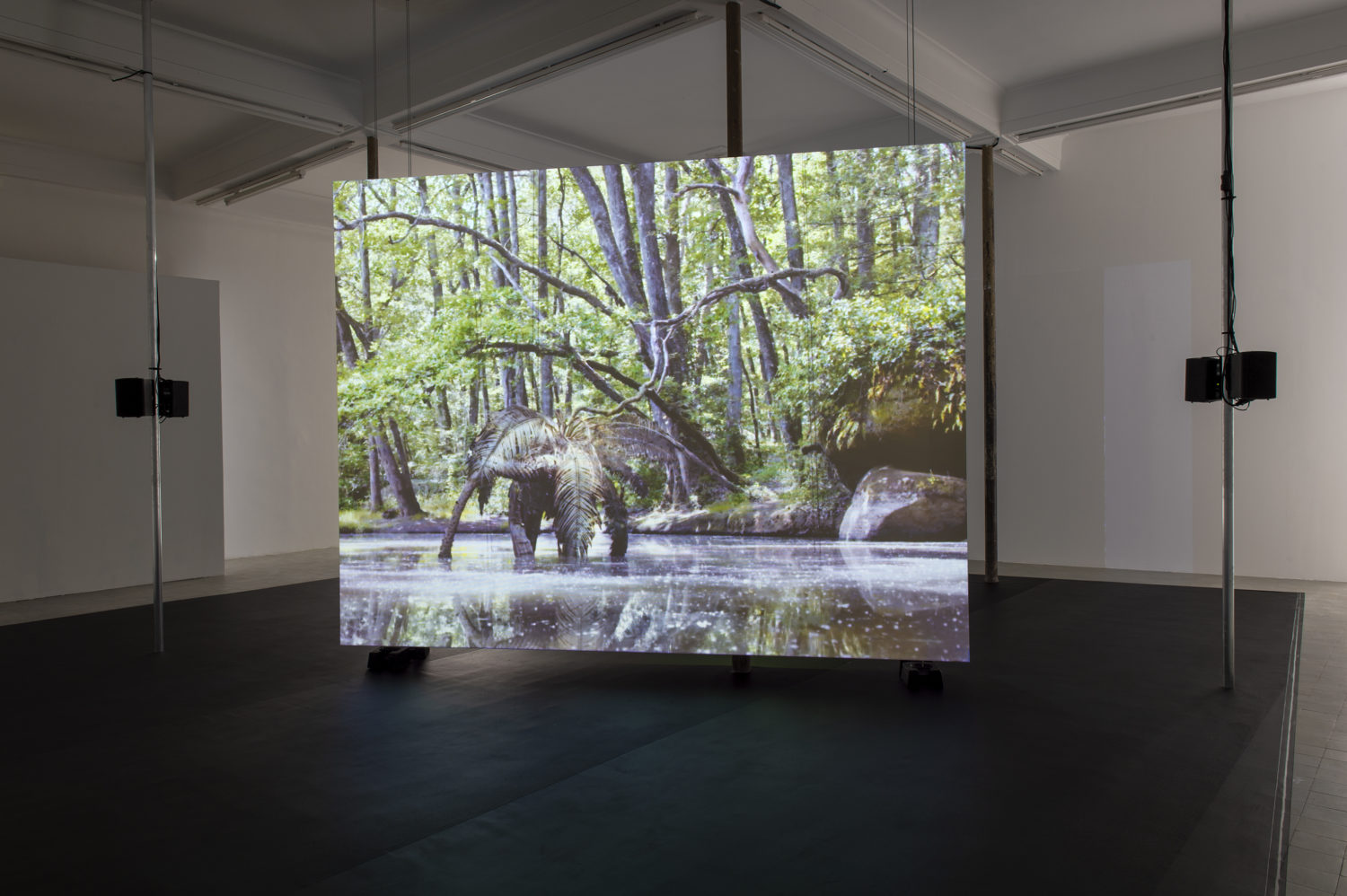 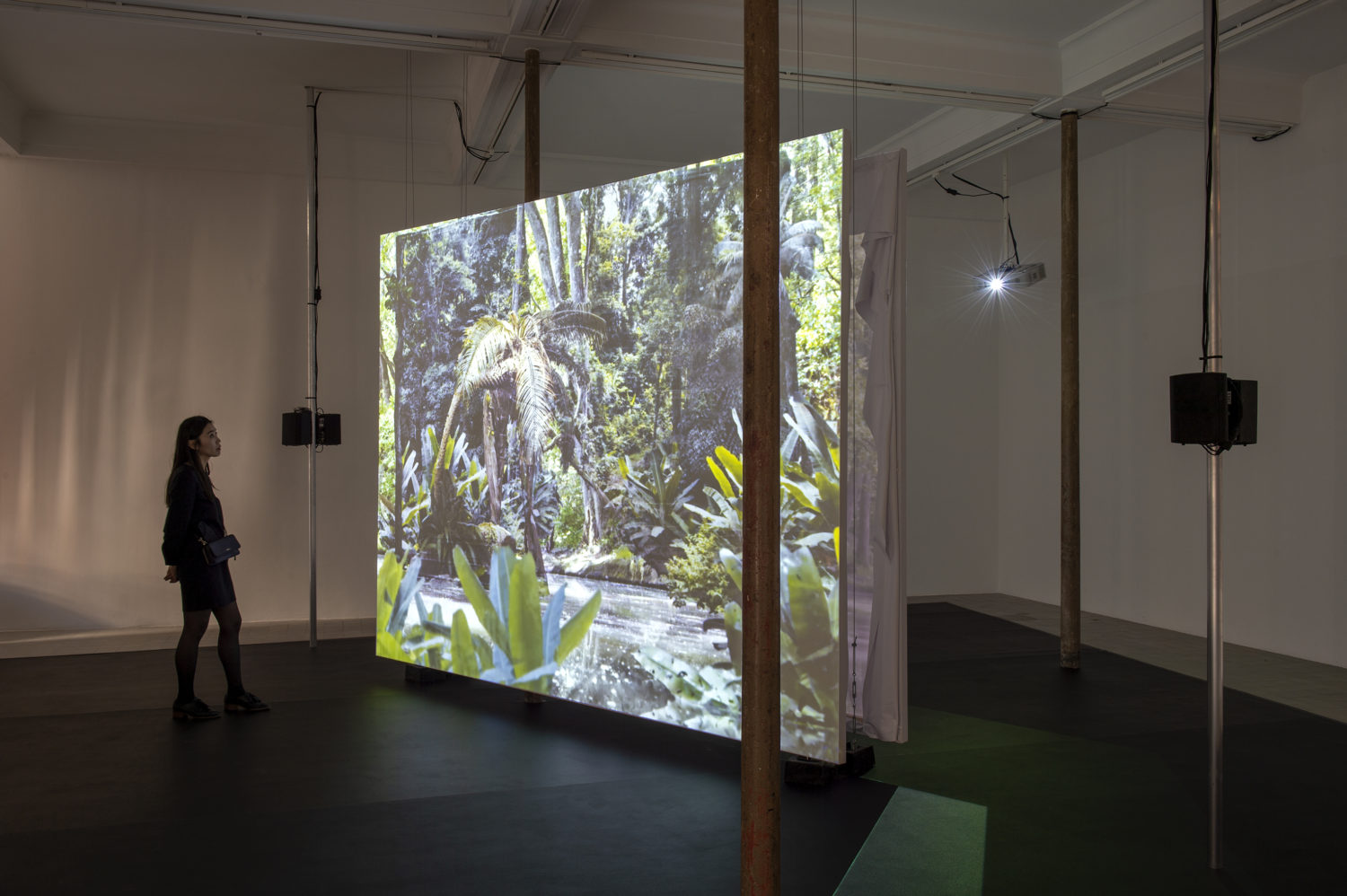 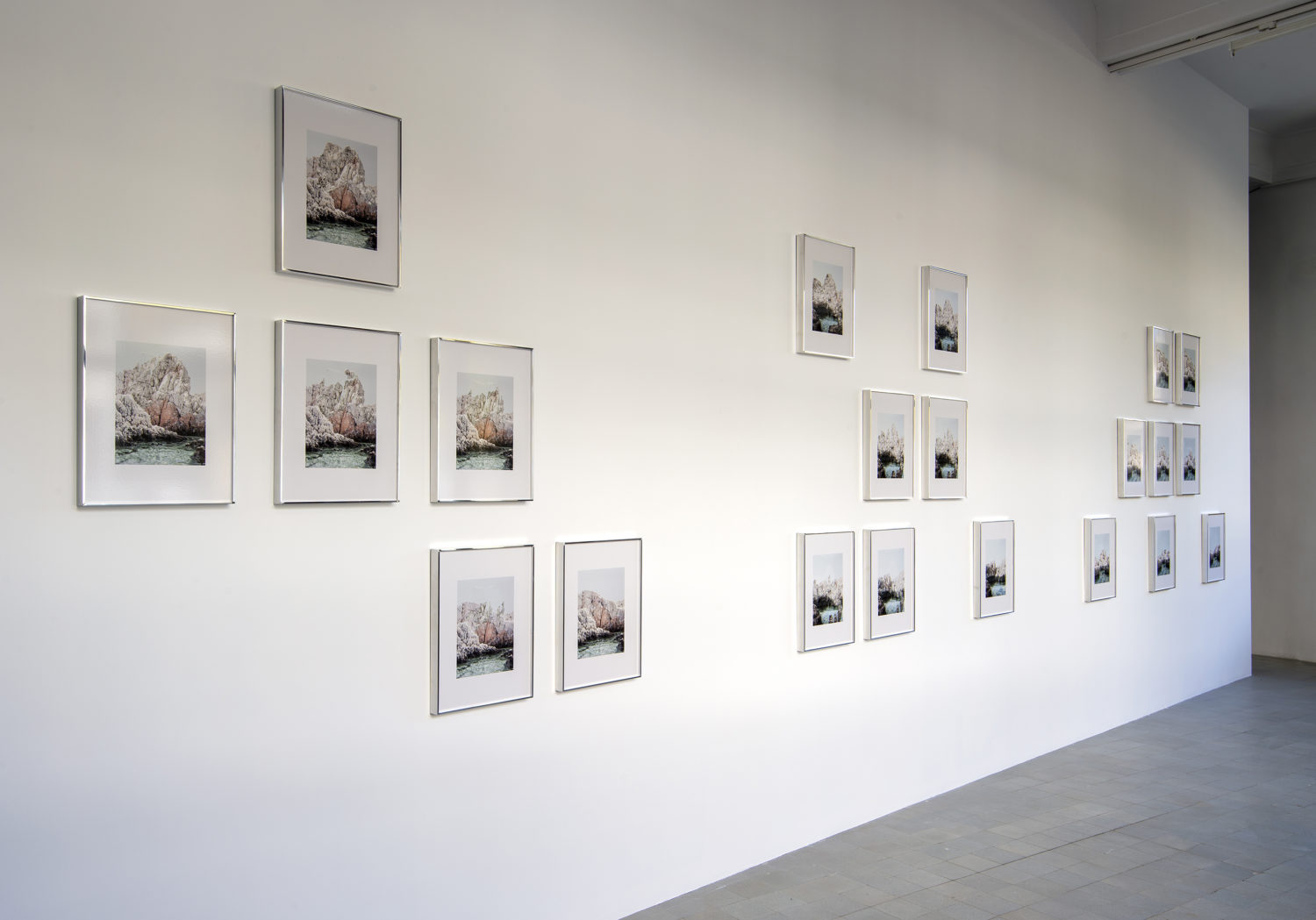 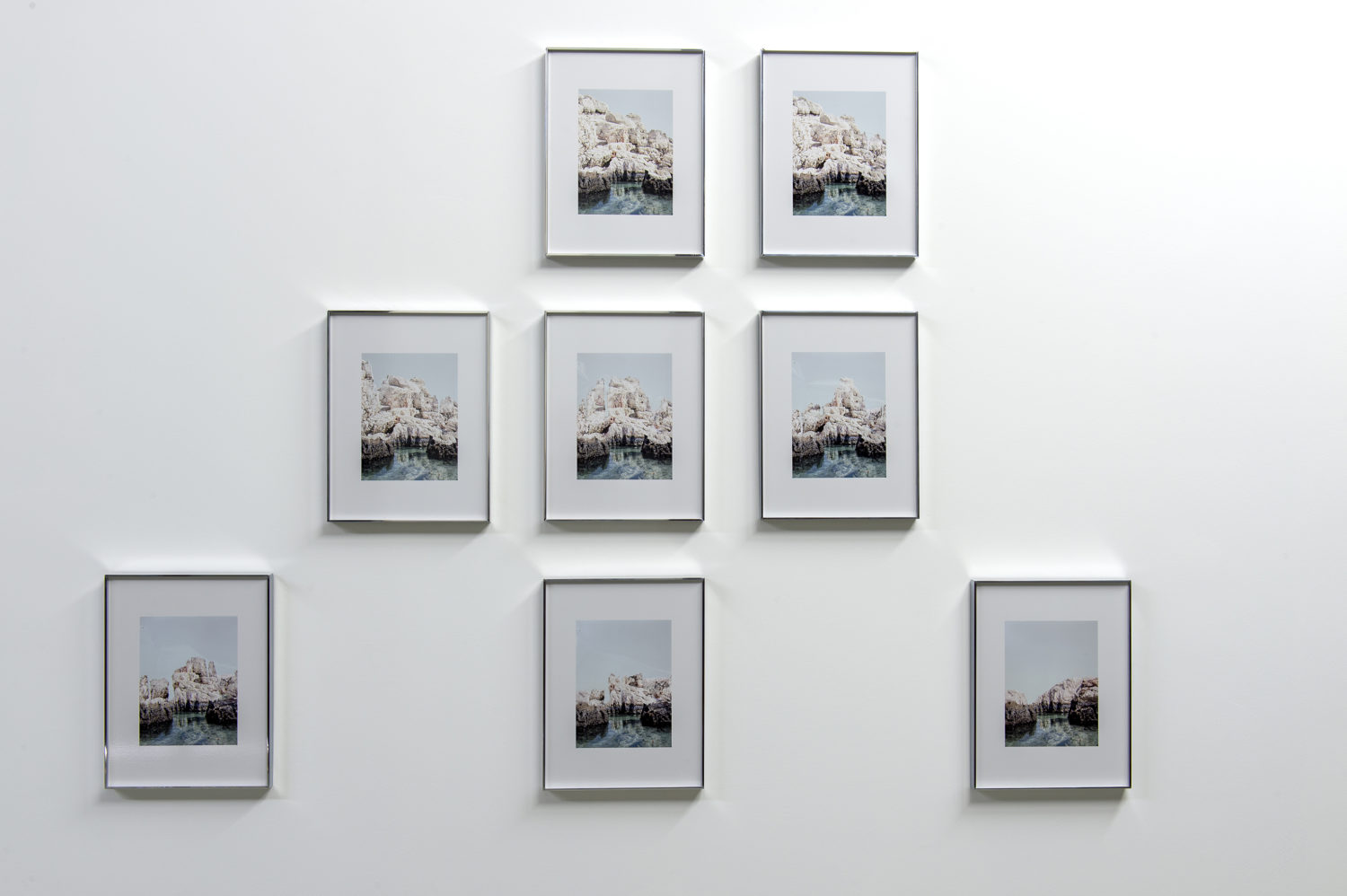 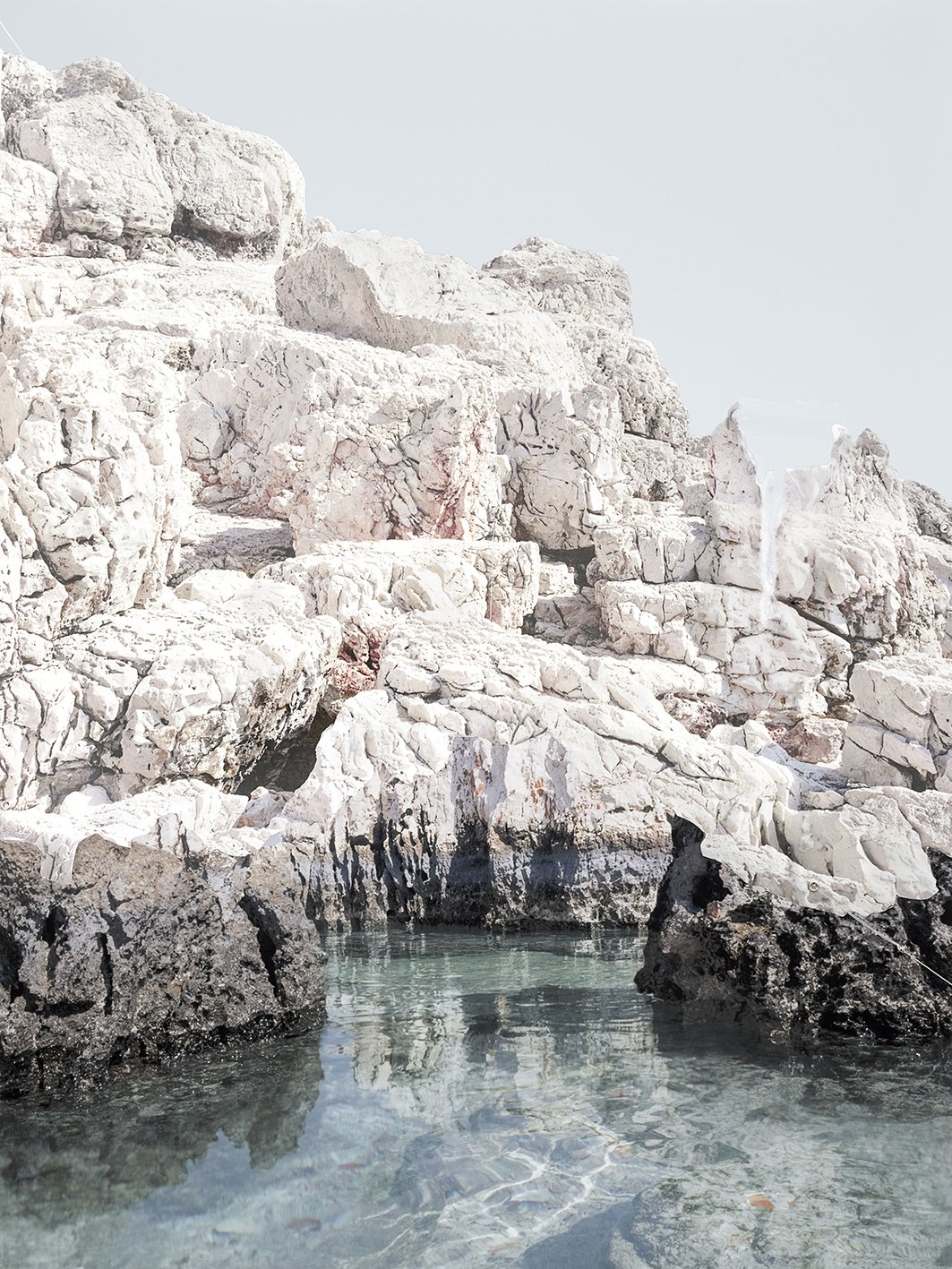 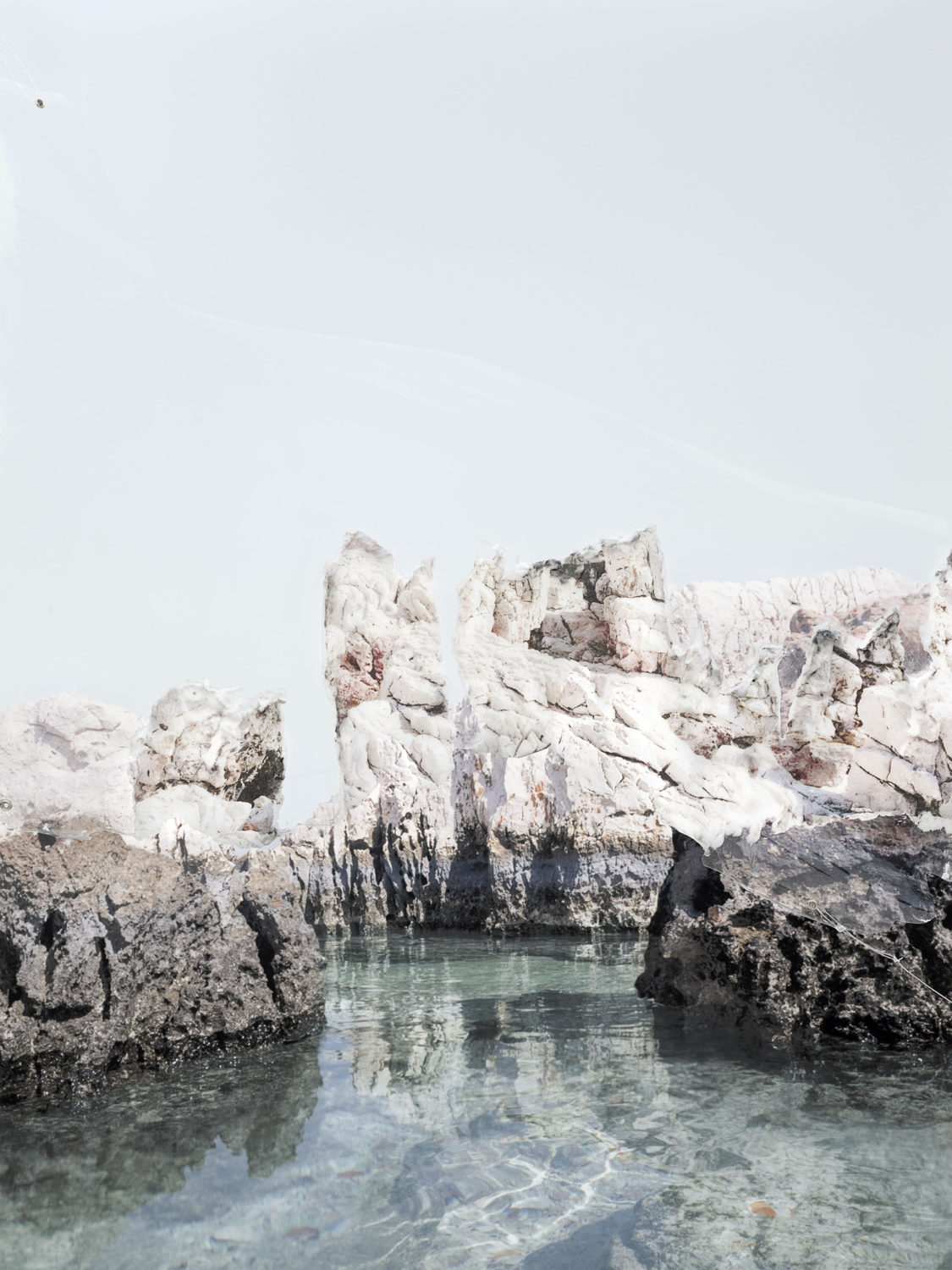 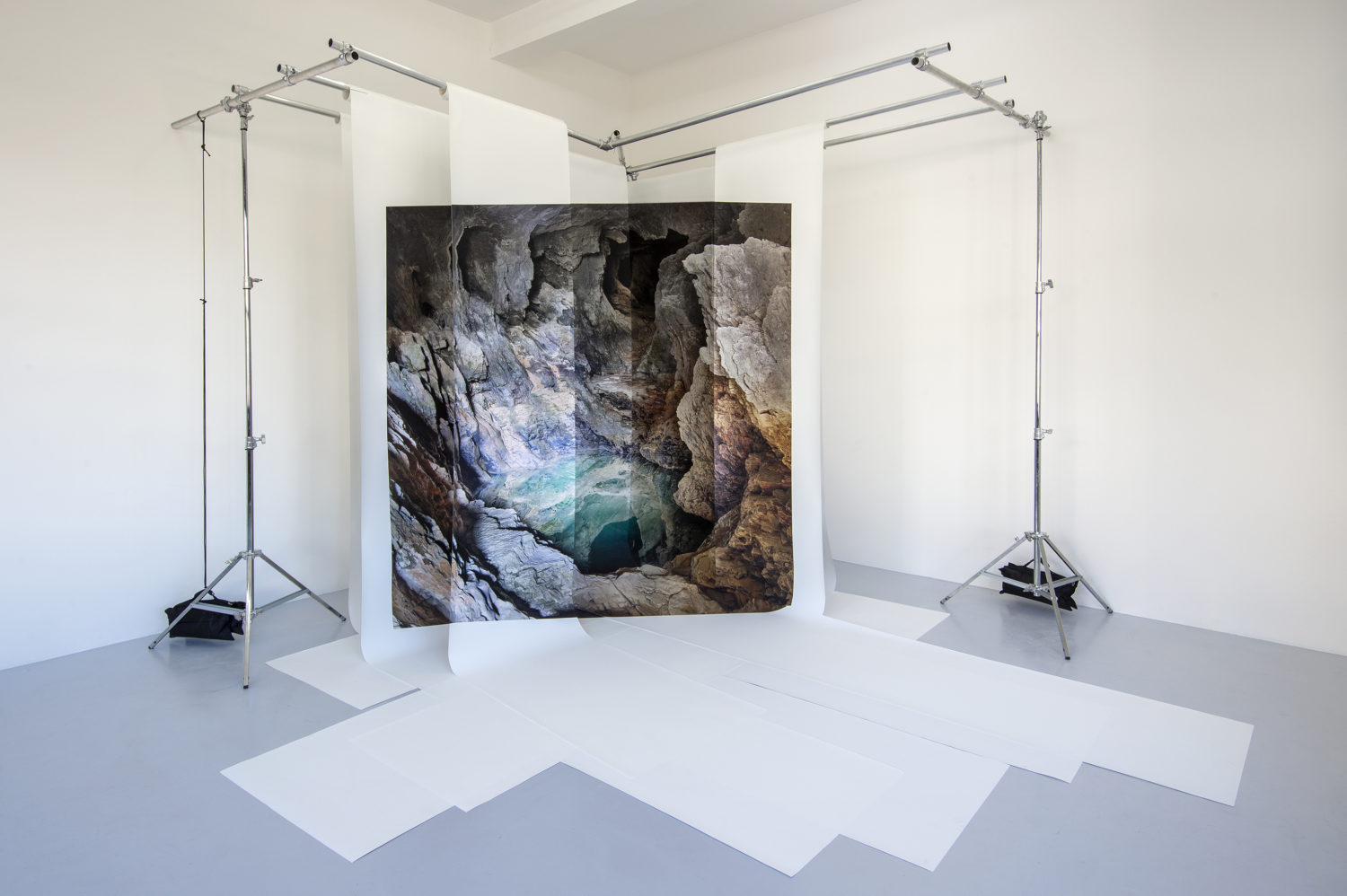 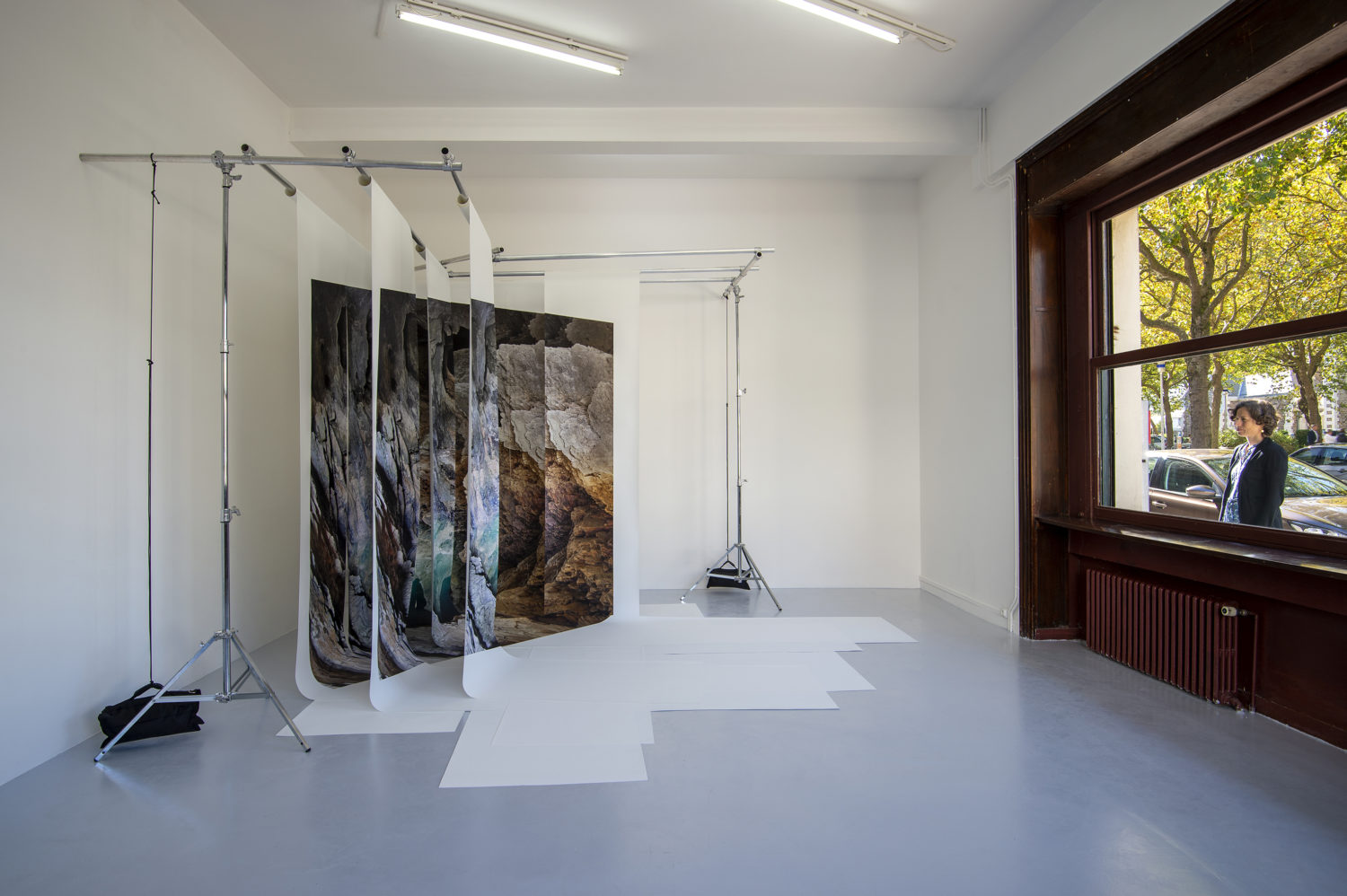 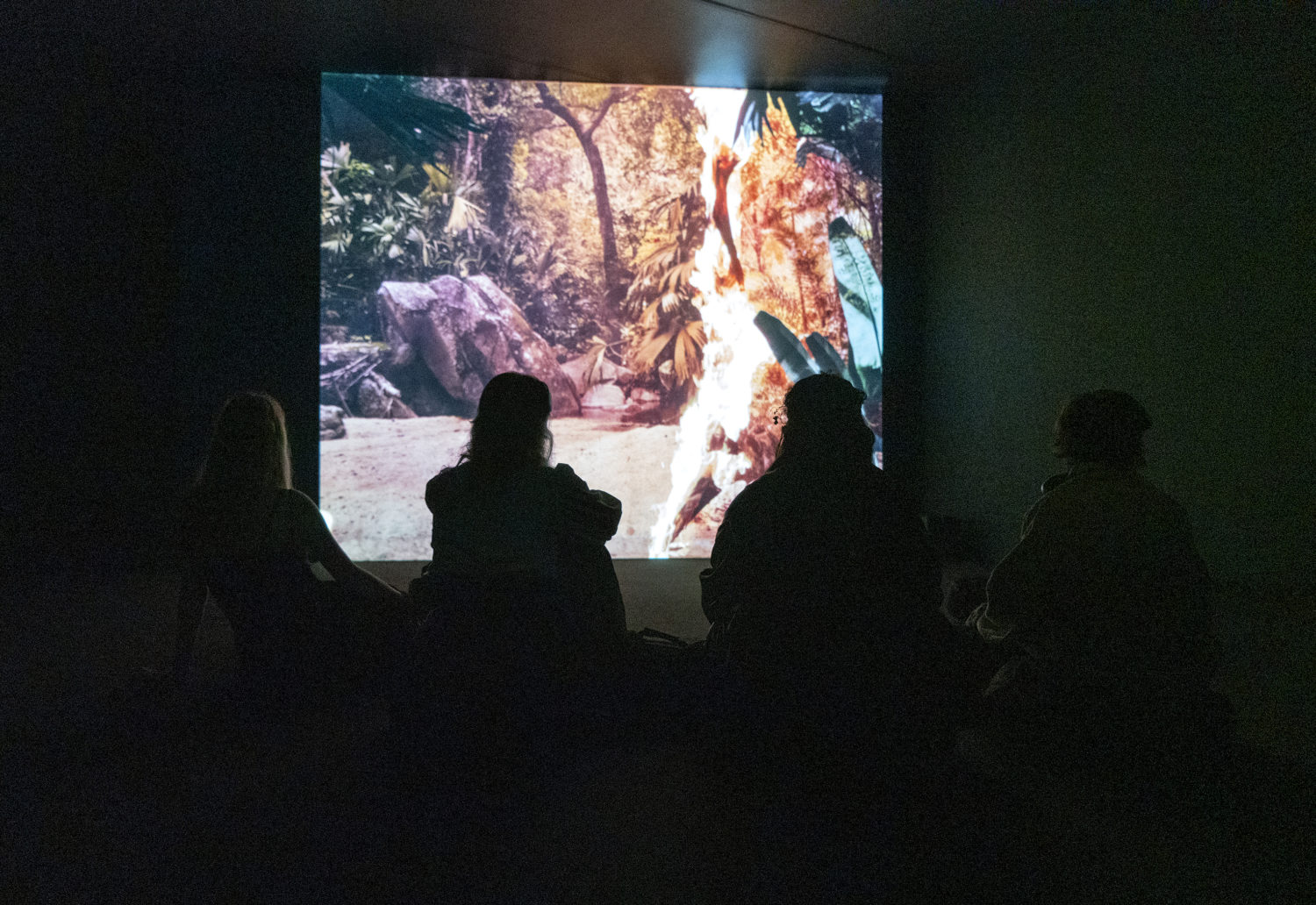 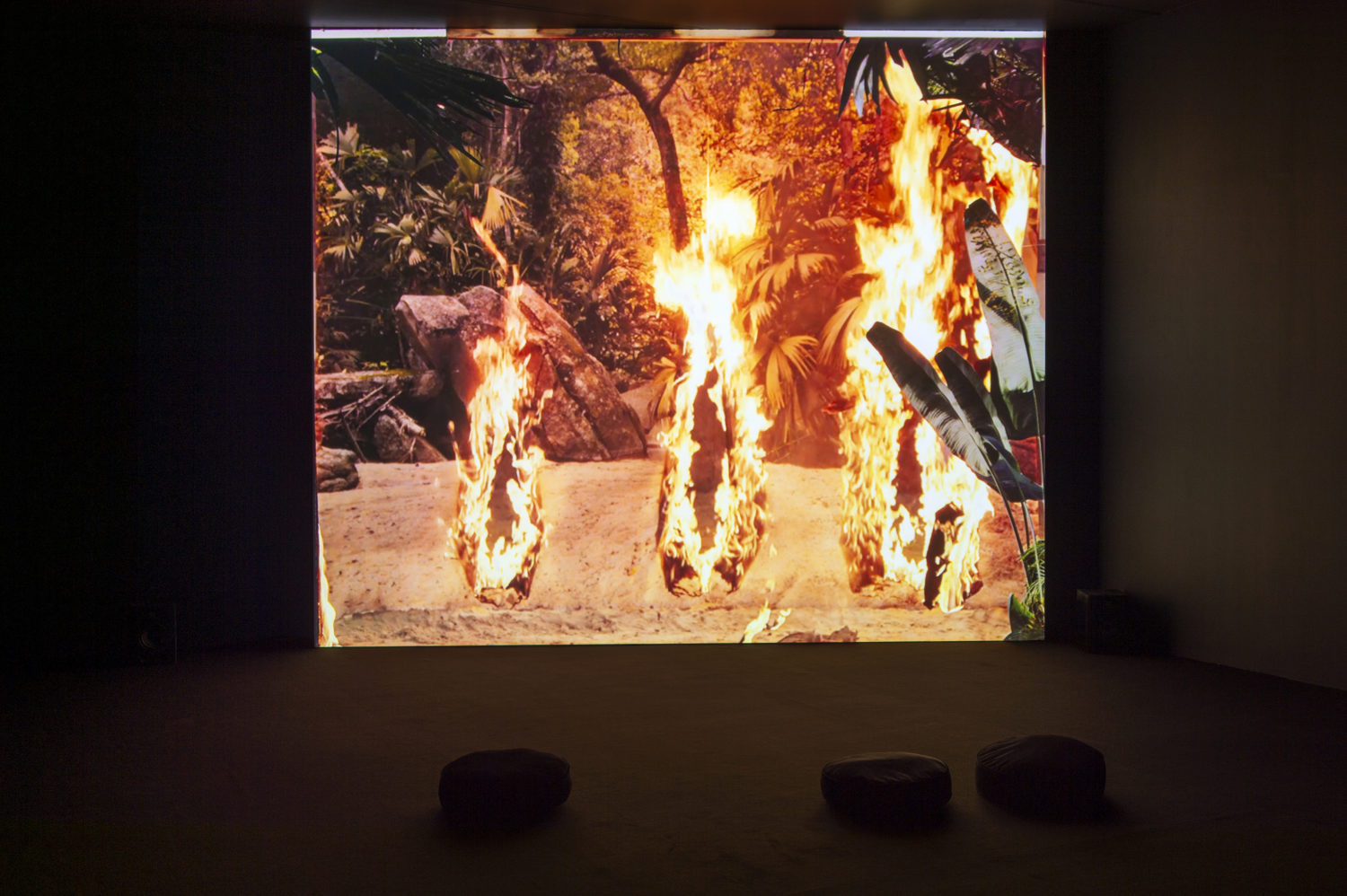 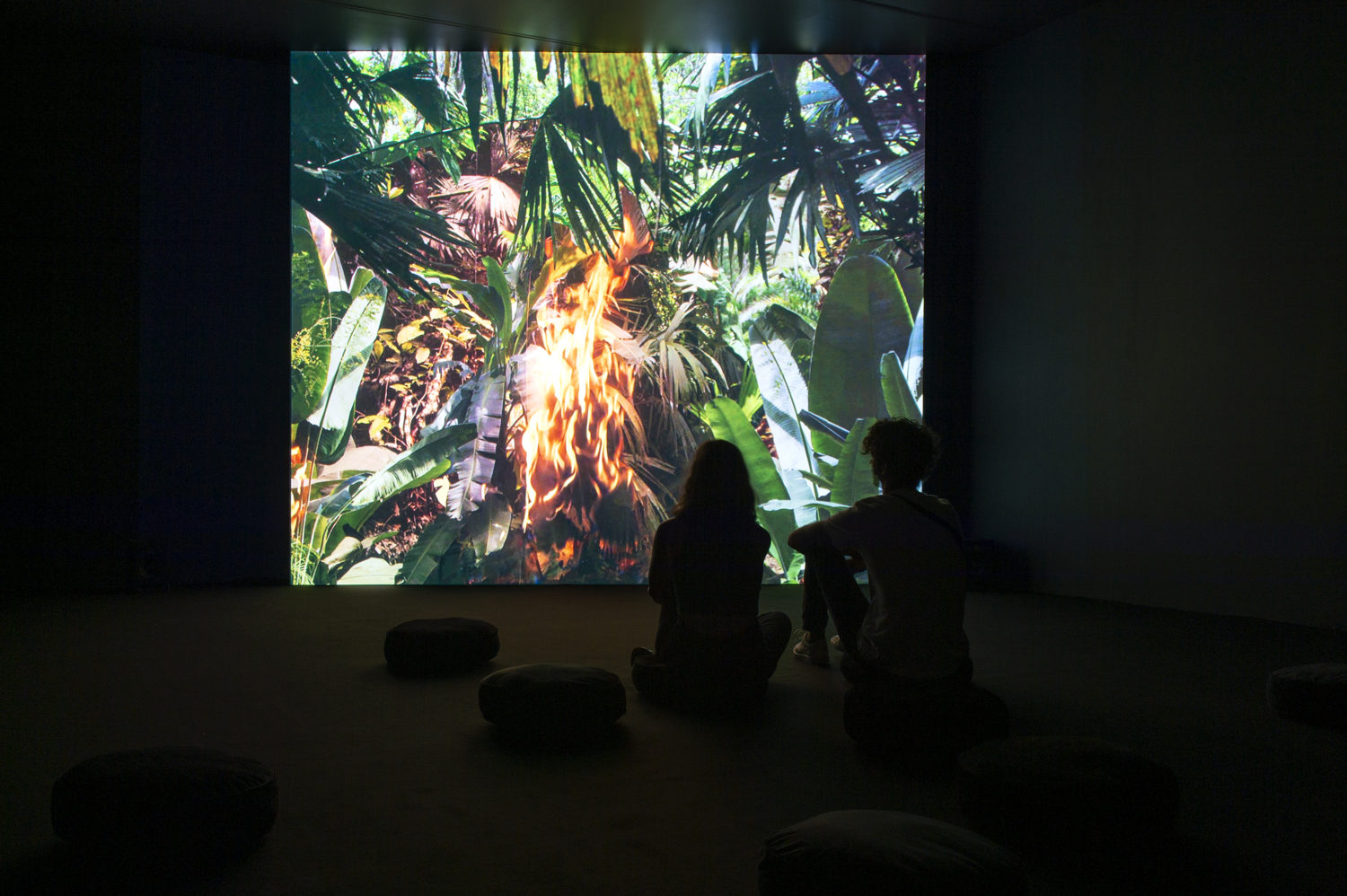 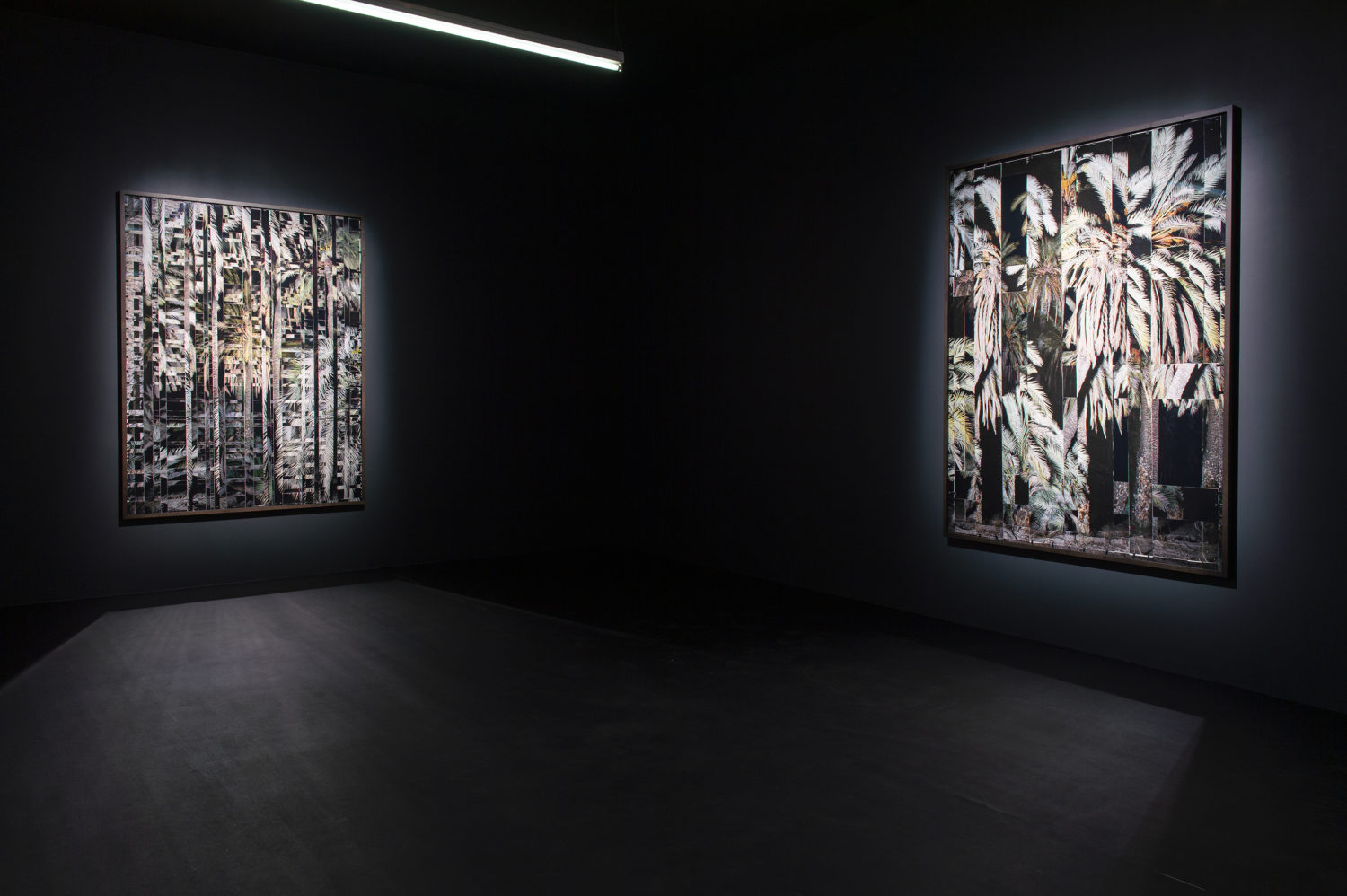 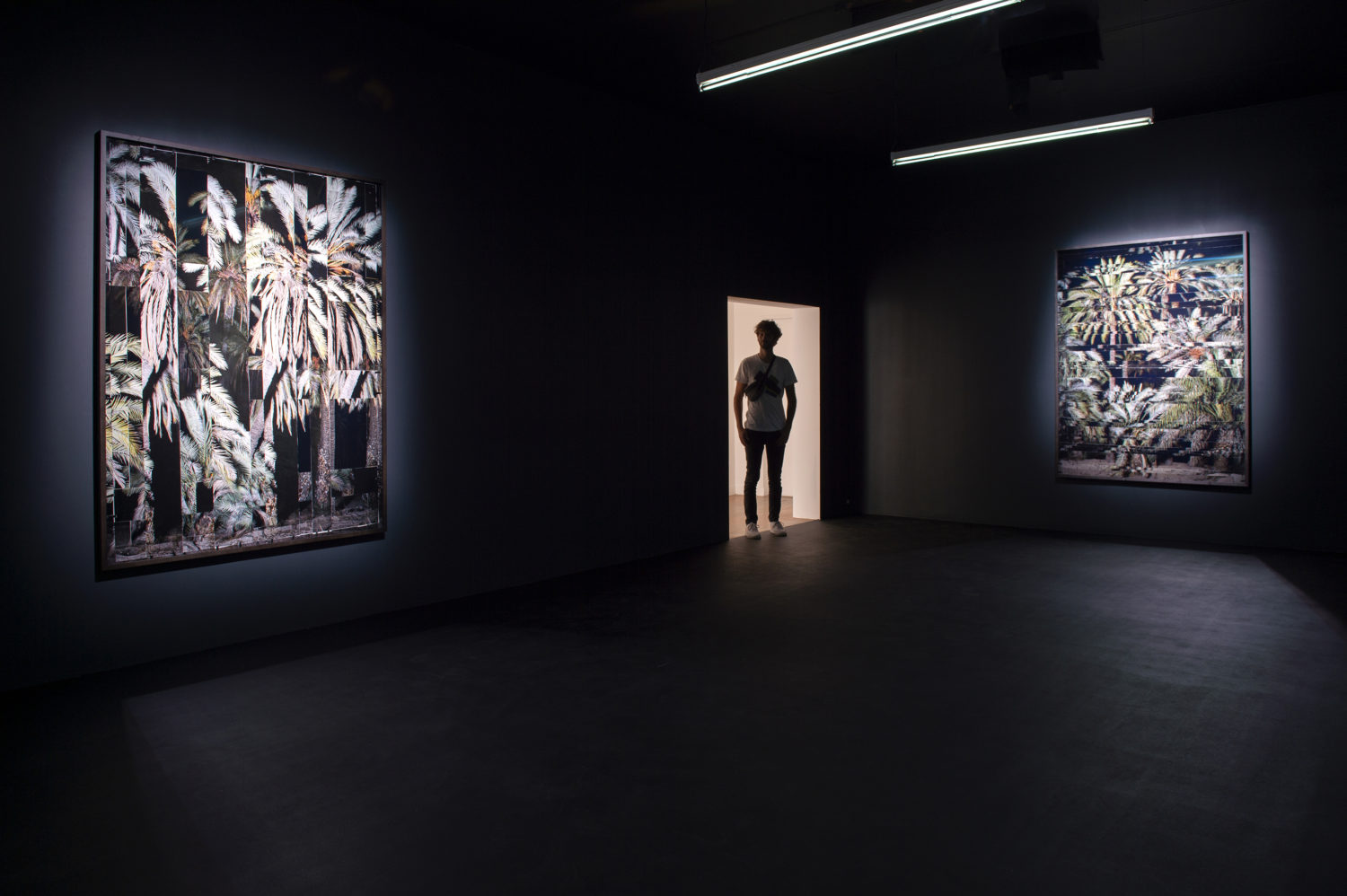 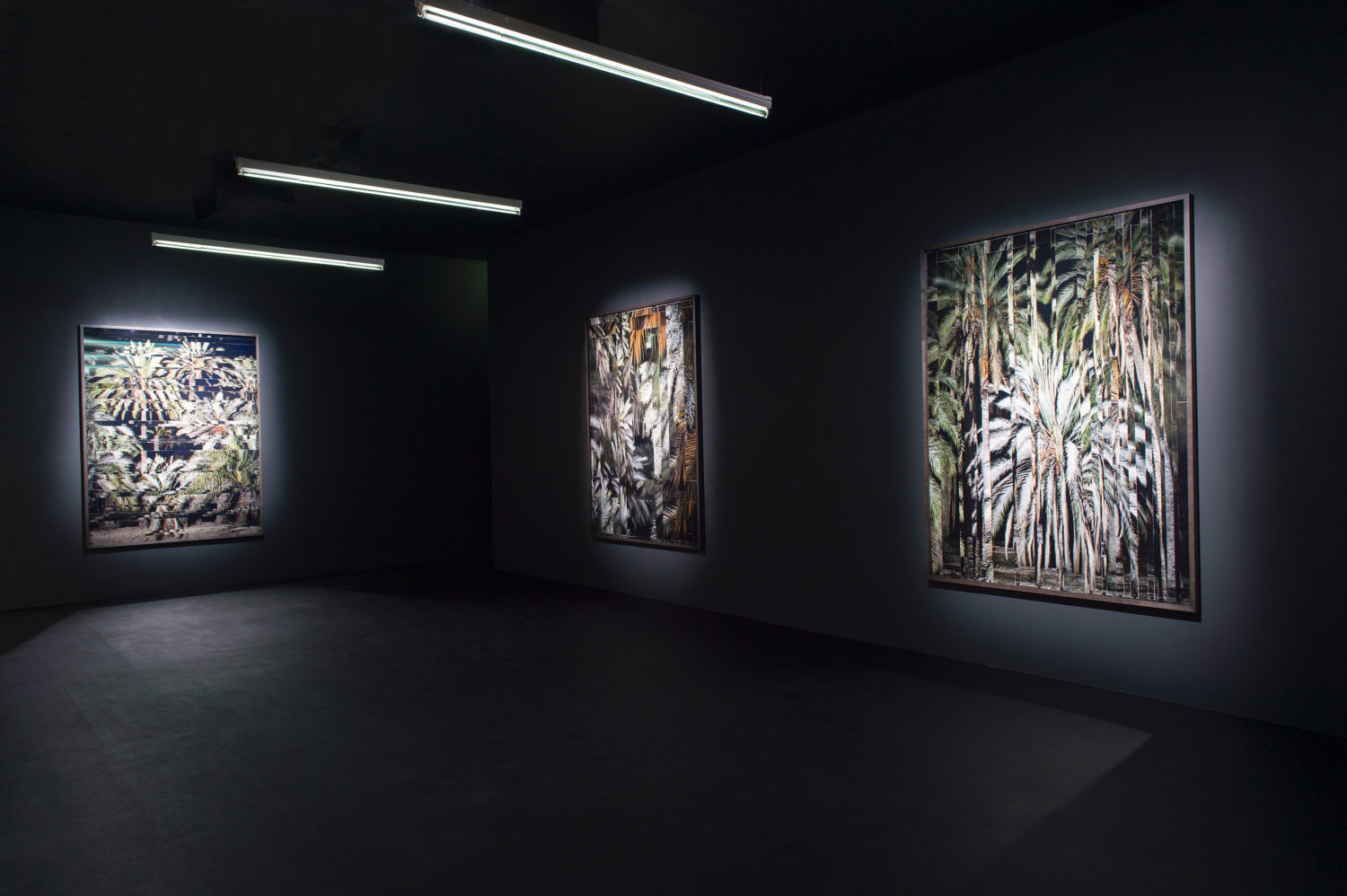 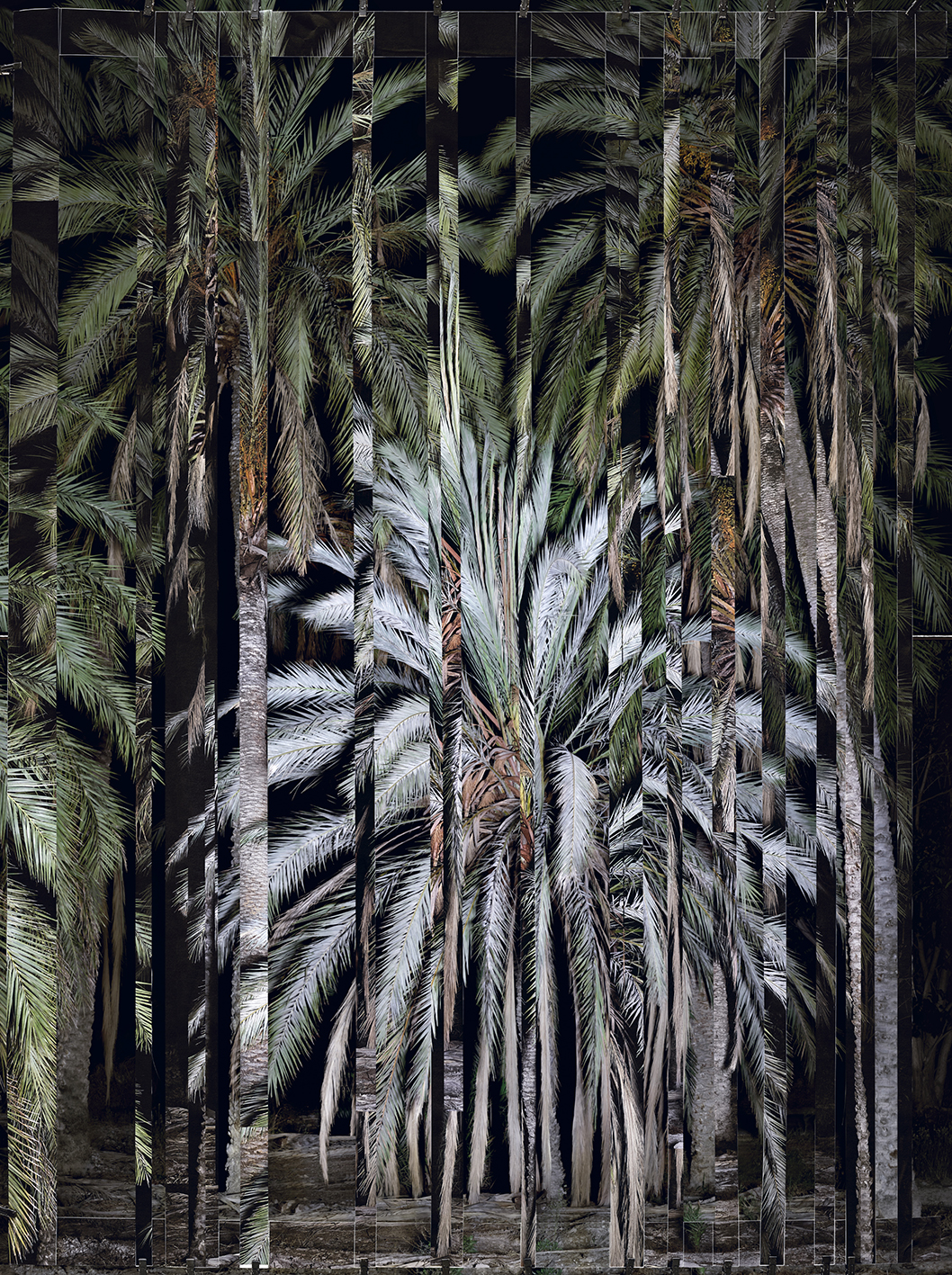 Noémie Goudal’s work, finely balanced between realism and invention, is an attempt to understand landscape by approaching it from multiple directions. For several years, the artist has used photography, video and immersive installation to develop a body of work related to discoveries made by paleoclimatologists. Paleoclimatologists look for clues (fossils, pollen, or carbon atoms captured in ice) that allow them to form hypotheses about past and future climate: how warm was it 300 million years ago? How have tectonic plates shifted and what climatic upheavals did this bring about? Researchers can draw extremely vast conclusions from elements that are sometimes microscopically small: in her work, Noémie Goudal, fascinated by this conceptual vertigo, replays these complex inquiries whereby landscape explains itself in the light of its own history rather than through the prism of the history of mankind. What has landscape been through to get to where it is today? What will it be tomorrow? How could this continuously moving landscape material be translated in physical terms? Using artifice and scenery, optical illusion and trompe-l’œil, Noémie Goudal’s images sublimate their scientific foundations without abandoning them, opening up onto all kinds of imaginary interpretations.

Any number of scholarly or technical terms include the prefix Post in their construction, indicating immediate succession in space or time. In particular, we use it to designate a concept following on from another, but which we are unable to directly and precisely name. Post-colonialism, post-industrial society or postmodernity are defined in relation to what came before, but the contours of their immediate sense haven’t yet been clarified.

There is a similar hazy indeterminacy in the title of Noémie Goudal’s exhibition at Le Grand Café: POST ATLANTICA looks like an enigma, a rhythm of alliterative sounds contracting the notions of space and time into one expression. The title could easily refer to the artist’s work in its entirety and not just this exhibition, Noémie Goudal’s art being so often located in the constant to-and-fro between actual geography and the past and/or the future, between the information that she conveys and what she suggests. In its generality, this title raises questions about an enormous territory, the Atlantic, with disquieting or even crepuscular undertones: after the profound modifications of the Anthropocene, what will the ecological future of these waters be? As usual, Noémie Goudal also asks us to look to the past, to the distant times when Africa and America were a single supercontinent which then fragmented. The geologist John J. W. Rogers named this paleocontinent Atlantica, since the division of this space created the South Atlantic Ocean around 200 million years ago. The title POST ATLANTICA therefore incorporates the idea of a shifting landscape, and intimately connects the exhibition to a concertina of multiple spaciotemporal layers.

When she is building her pictorial devices Noémie Goudal uses a kind of handmade scenery that deliberately displays its structural archaisms and imperfections in opposition to the smooth aesthetic of digital retouching tools. The artist’s new installation, presented in the large space on the ground floor of Le Grand Café, reasserts her knowingly rudimentary approach and the poetics of modest special effects in inventive paper scenery that emphasises the materiality of the image itself. Entitled Inhale Exhale, two screens are set up and presented back-to-back, playing out-of-sync loops of the same video projection. The images immerse the visitor in a calm marshland landscape with characteristically dense bankside vegetation. A number of scenery flats emerge from the plane of greenish water, hoisted by a system of ropes and pulleys, then disappear once again beneath the stagnant surface. The setup, a performance filmed in a static shot, allows new layers of tropical vegetation to slowly appear: palm trees and banana plants, that make up different points in the memory of the landscape. Here, the artist is making a subtle reference to the history of geology, to the German climatologist Alfred Wegener’s formulation of his theory of continental drift in 1912. Long after his death, the mechanisms of plate tectonics became clear to the scientific community, as did the visual interlocking of Africa and Latin America, the oceanic ridge, and the presence of particular plant species and minerals on both sides of the Atlantic. The palm or the banana recurrently appear as such in Noémie Goudal’s work: they are markers of movement, standing on the two sides of the bank, witnesses to the history of a dislocated and torn landscape. This idea, dizzying for a human, that leads to having to think of a territory as being in perpetual movement, took a long time to be adopted. The installation Inhale Exhale integrates the perpetuum mobile in a meditative and choreographic form: the images turn their backs on each other with a delay, to a rhythm of point and counterpoint like a musical round or a vital, primal respiration. This is further amplified by an englobing ambient sound, sounds of wildlife and an alarming murmur that seem to surge from the bowels of the earth, coupled to the almost comical creaking of the scenery being operated. On a side wall, the artist presents exactly that: two photographs from the filming, full of inventive machineries, that reveal the construction of her own images.

Outside the projection space, on a full-height daylit stud wall that stands facing the large window bay, the artist is showing Décantation, the recent developments of the Démantèlement series. It too evokes the continual metamorphosis of an almost crystalline topography, nuanced with delicate tints tending towards white, pale blue and evanescent pink: a mountain is photographed and printed on water-soluble paper, in a mise en abyme it is then repeatedly reinserted in its original landscape and progressively washed out. The photographic process that is employed means that the monolithic mountain seems to gradually melt, just as glaciers are in the present day. The viewer’s body stands between this mosaic of liquified minerals and the exhibition’s surroundings (Saint-Nazaire and the stream of urban life that flows on the other side of the glass) like an interpretive medium, physically invited to take up a position in respect of the surrounding images.

In art as in architecture, caves are spaces that have always inspired very particular ways of imagining the world, of forming concepts that are both mental and geophysical, naturalistic and mythological. Noémie Goudal has already worked with this motif, which can be seen as an interface between mental and physical space, a terrestrial laboratory tied to the emergence of art and images. Most notably, in the installation Haven her body was the cave appears as the earth’s matrix, treated as a border between reality and fiction, truth and invention. At Le Grand Café, the artist is presenting a new work in which the cave plays the principal role, correlated with questions of point of view and of perception: how to be part of the perspective of one image while offering up a landscape that is part-real, part-artificial?

To this end, Noémie Goudal revisits the technique of anamorphosis, the secret art of perspective (Albrecht Dürer): on large strips of paper falling from the ceiling to the ground like backdrops in a photo studio, she presents deformed photographs of the space which can be recomposed from a preestablished point of view. Once again, it is about superimposed planes and fragmentations that create unexpected perceptions, that question our relationship to space and our imagination of space, and that reconsider the active place of the spectator in general. The title of this new installation, Study on Perspective III, covering both the focus on reality and its framing, both landscape and a change of scenery, is a strong sign of the obsessive research that Noémie Goudal carries out through her work.

Like a mobile in a field of forces, the world such as Noémie Goudal represents it is constantly subjected to the dynamic determinism of the elements; water and fire being recurrent operators. On the first floor of the art centre, fire takes a leading role: a symbol of destruction and purification, fire embodies an elemental comfort and warmth that is as connected to change and renewal as it is to death and hell. Noémie Goudal’s most recent film, created for this exhibition, relates to a comparatively recent discovery. On a mission in Antarctica, a team drilling boreholes discovered coal deposits, a fossil fuel created by the carbonisation of plant organisms, which would prove the presence of tropical plants at that spot. Like a memory of fire beneath the ice, this part of Antarctica would therefore have been much closer to the Equator than was previously thought. In a poetic translation of this discovery, Noémie Goudal’s film is titled Below the Deep South, since Antarctica is at the southernmost point of the planisphere; once again it relies on an optical illusion, where layers of scenery that represent the jungle stand one behind another in front of the camera, from the smallest to the largest, to form a single body of landscape. Layer by layer the artist sets fire to it, and, as the scenery is consumed, paradoxical feelings are aroused: fascination in the face of the earth’s power and its internal heat, fire as an instrument of passing time allowing the transition from one landscape to another, and the deathly sadness provoked by the destruction of an ecosystem, cruelly manifested by the recent huge wildfires connected to climate change. The volume of the soundtrack decreases as the public burning progresses: the noises of the jungle die down at the same rate as the flames, until finally there is just the chirp of a cricket.

Before we reach the film, Noémie Goudal is showing five photographs drawn from her Phœnix series in a pallid neon-lit space. Once again, through the allusion in the title, they recall the metaphor of fire as principle of death and rebirth. Picking up on the motif of the palm tree as a marker of temperature across the ages, these photographs are produced by a particular process: the artist photographs a palm grove that she has illuminated with white and artificial light, and then makes a life-size print of the electric landscape. The resulting image is next partitioned in strips, stretched on a frame, placed in front of the palm grove, and rephotographed to create a disturbing regression. With this complex device, Noémie Goudal arrives at a kind of optical marquetery, a disconcerting woven photography that disrupts the laws of both gravity and perspective.

Even though they are made by hand, these Phœnix seem to relate to glitch art, computer images deformed by digital accidents that often show as de-structured pixels, abnormal colours or photographic aberrations. The artist and theoretician Rosa Menkman, author of The Glitch Momentum, describes this art as “wonderful interruption that shifts an object away from its ordinary form and discourse”. Although technically distanced from these ‘bugs’, Noémie Goudal comes paradoxically close to them: she defends the beauty of imperfection, and destabilises our ways of believing in images and representations. Alternating appearances and disappearances, these photographs ask us to excavate the multiple layers of their composition, and we should not forget the polysemy of the title: the date palm was named Phœnix dactylifera by the botanist Linné in 1734, perhaps because the Ancient Greeks considered it to be the tree of the Phoenicians (Phoinix); perhaps because the palm tree can survive a partial burning, like the bird being reborn from its ashes.

Strange circulations traverse the whole exhibition, clashing or harmonising on unexpected levels, where freezing links with burning, the mineral with the wet, brightness with darkness – Noémie Goudal’s works pursue a turbulent and protean matter, paying constant close attention to understanding the movements of the world by augmenting the density of images, by enlarging their embrace of space and time.