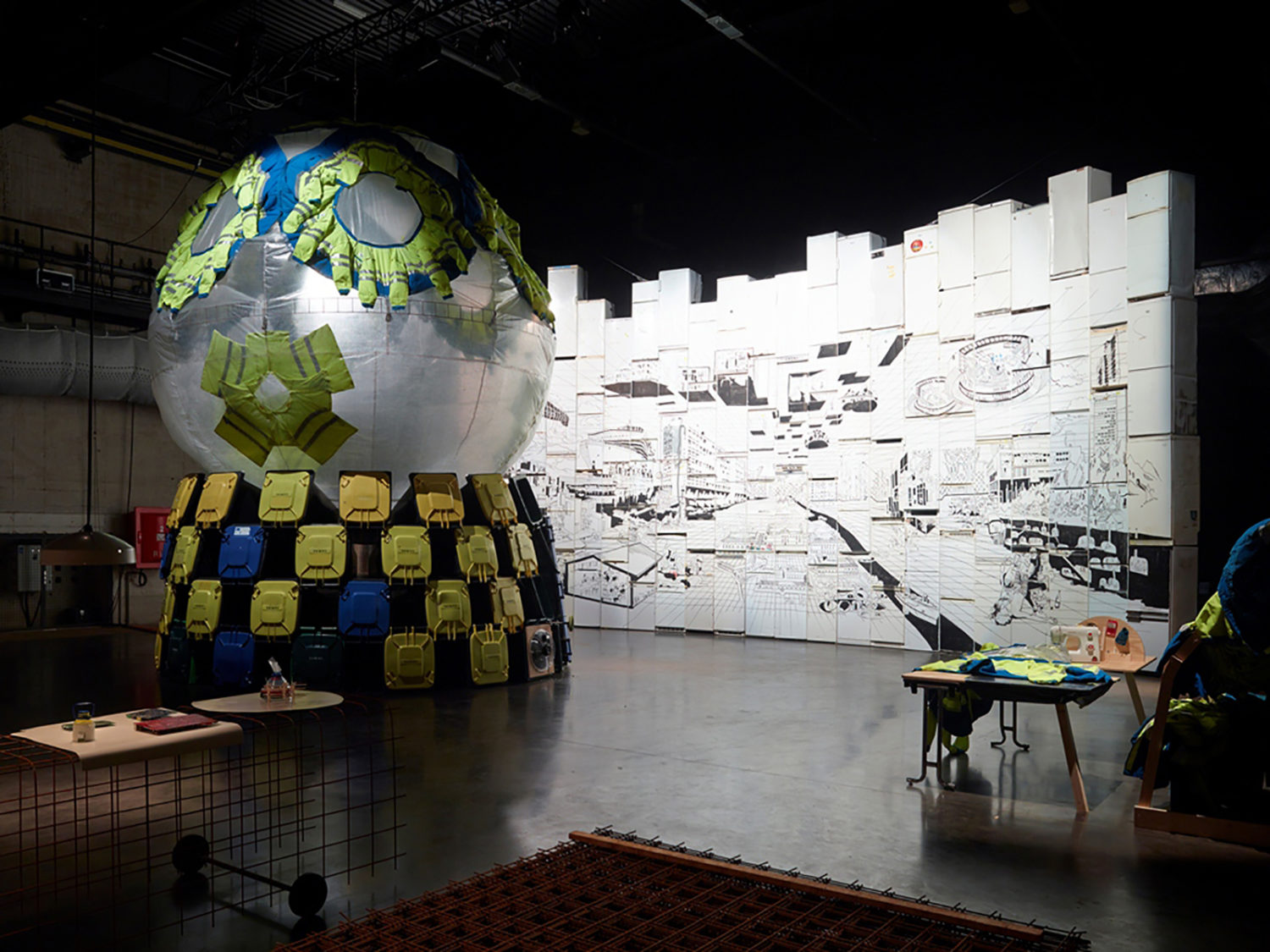 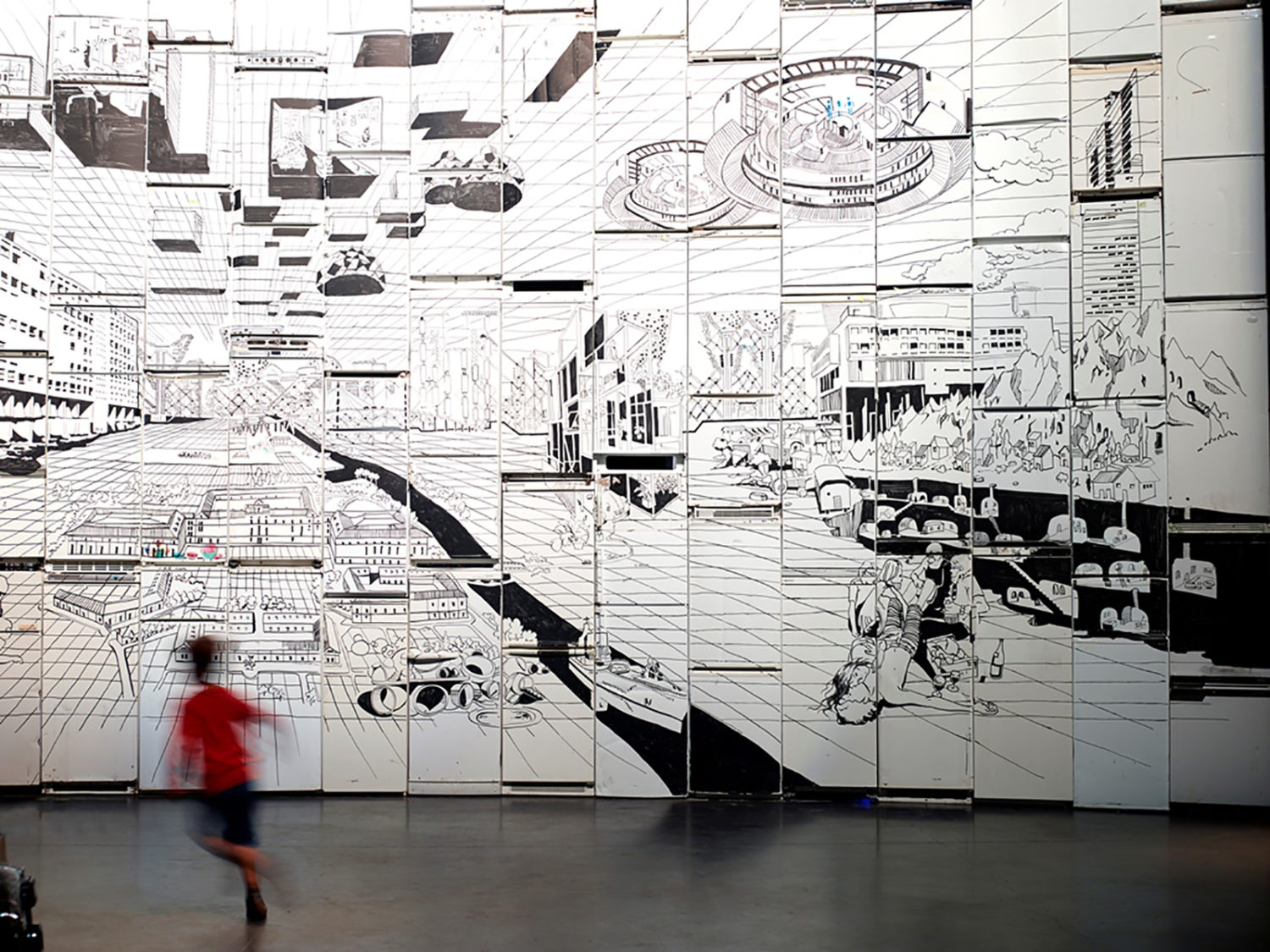 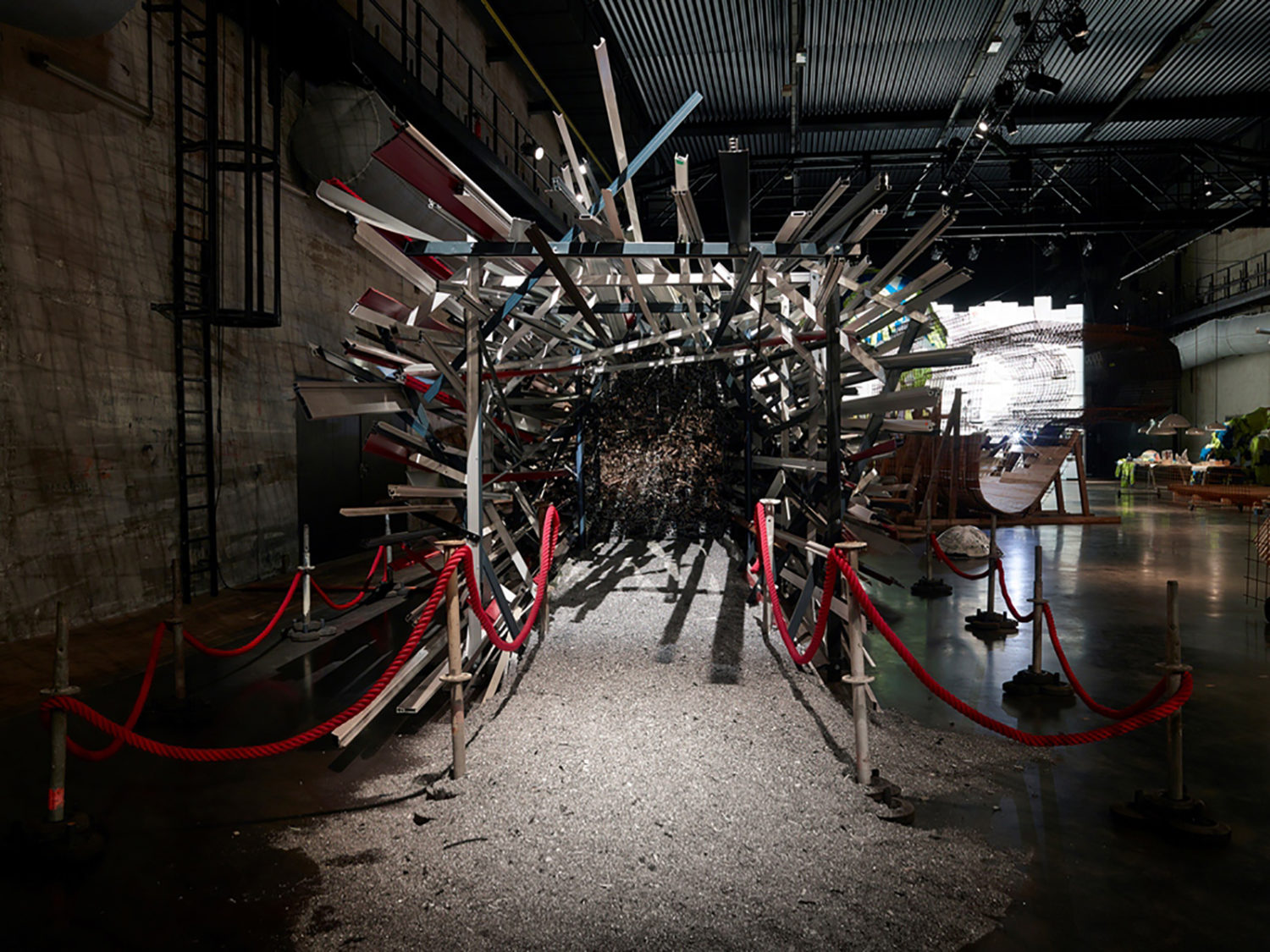 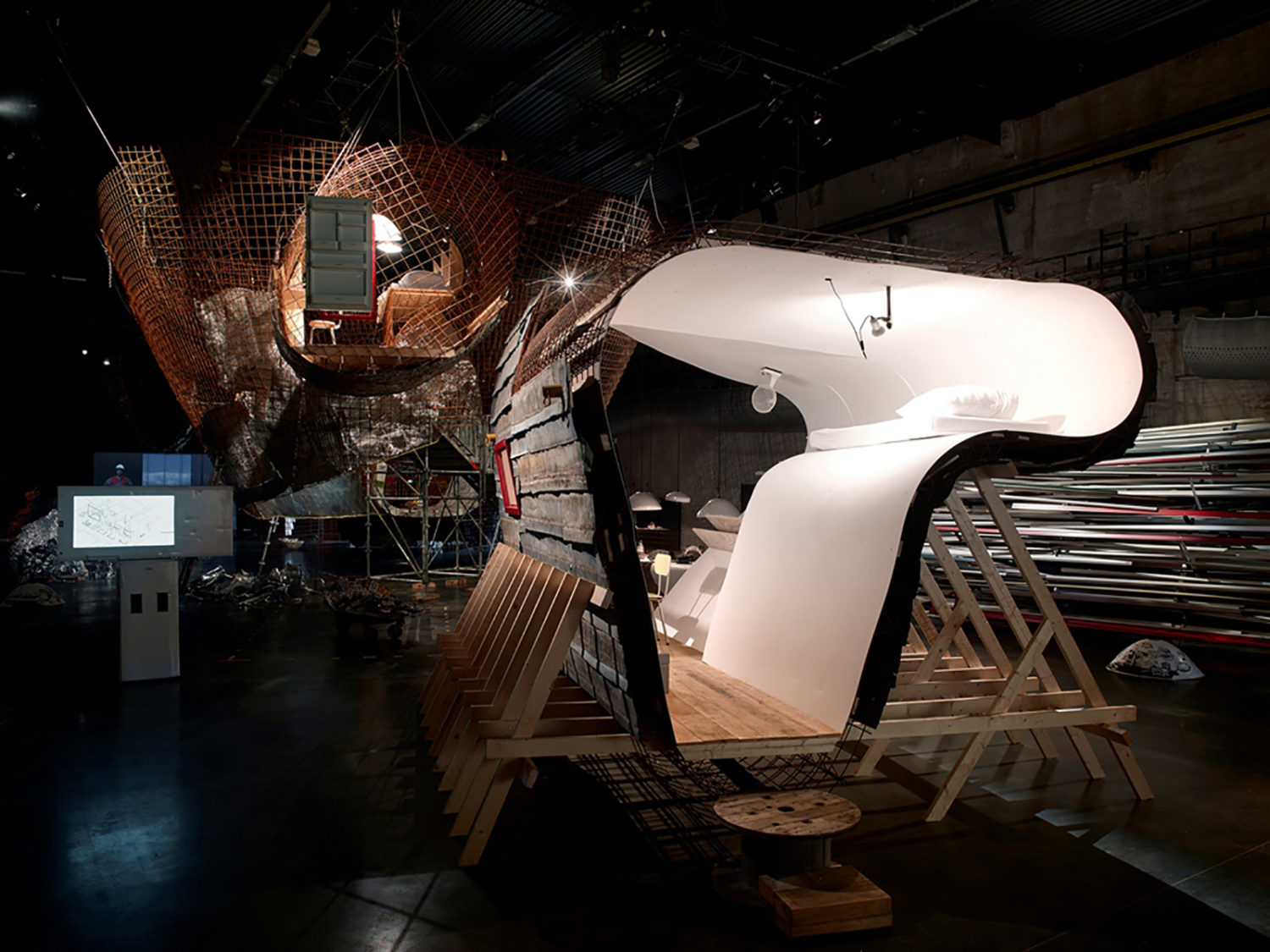 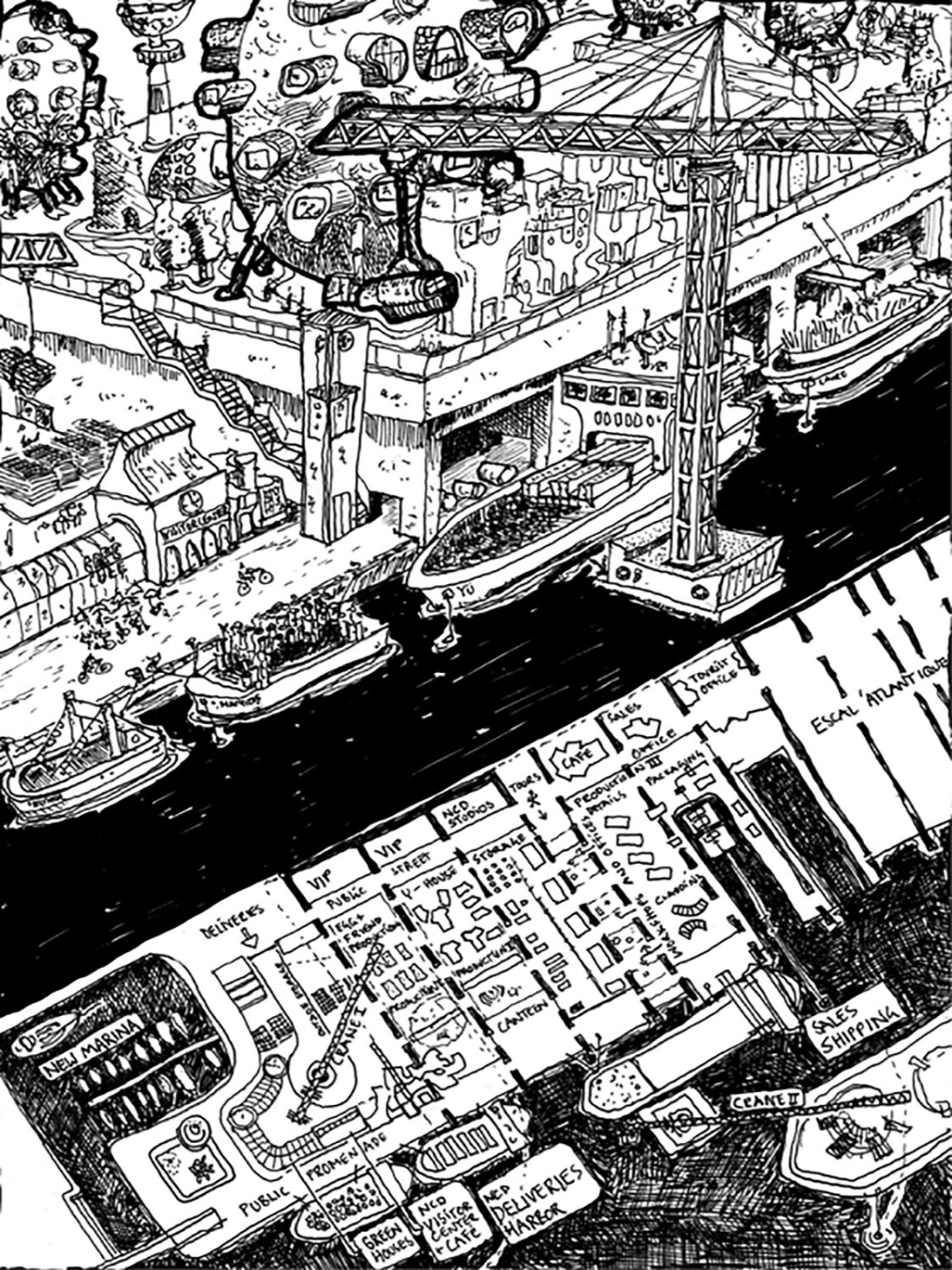 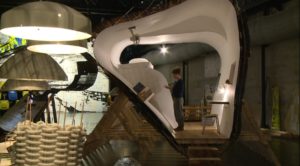 “Everyone dreams of an ideal city. Except for those who consider the town where they live to be satisfactory. But they are rare. As rare as those who find perfect the society in which they live. The philosopher in his library and the exile in a shanty town dream of a city that could satisfy their everyday lives as much as their fantasies.”
Michel Ragon, L’Homme et les villes, 1995

Participatory Foundations
Raumlaborberlin is a collective of nine architects, city planners, landscape architects and artists. Their name could translate as both space and laboratory, since there is no equivalent pre-existing common word in German for Raumlabor: a neologism referencing notions of experimentation and empirical research, guided by a community manufacturing process.
According to the requirements of the project, the members of raumlaborberlin are willing collaborators; it is a way of diversifying their approach and responding in the most appropriate way to the context, which is necessarily specific when the question of urban renewal is being addressed. While the collective is preoccupied with urban planning, this nevertheless always takes place by involving the inhabitants and by multiplying exchanges with users as much as with experts from all horizons. This participative method leads to a number of formal hypotheses, in which architecture is considered as mobile and modular, related to public space, and a receptacle for performances and interactions.

Tipping points
In Saint-Nazaire, raumlaborberlin is working with a powerful context: the LiFE, the submarine base, the shipyards, the town reaching out towards the Loire and the ocean, and a dramatic history. From all of this, raumlaborberlin has taken some decisive moments and distinguished particular tipping points: the fact that the shipyards have moved on from merchant shipping to the tourist industry, and are currently building an outsized liner baptised Harmony of the Seas. Or that the exhibition site, the LiFE, is made from part of the colossal bunker built by the Wehrmacht: a block of concrete inherited from darker times that separates the town from the sea, a space of death rehabilitated as a site of life that now houses different cultural facilities. Raumlaborberlin focuses itself on these tipping points in history, where an architectural object is distanced from its initial function and transformed into something unsuspected by dynamically going beyond itself.

Analogies, proximities, rebounds
This reflection on how some spaces mutate leads the collective to shift, by analogy of form or of thought, towards other celebrated examples from architectural history. Raumlaborberlin cites in this respect Fourier’s phalanstery, an imaginary social palace, halfway between the Palais-Royal in Paris and the Palace of Versailles, which pulled regal architecture in the direction of community housing. This project was ultimately produced in Guise by the industrialist Jean-Baptiste Godin, under the name of the Familistère. Incidentally, the covered communal courtyard of that cooperative building recalls the interior courtyard of Harmony of the Seas, the immense liner previously mentioned. How is it that communities of such different natures can flourish in the same type of space? How does space act on the collective, and inversely?
Another architectural adventure that caught raumlaborberlin’s attention is the Tower of David in Caracas, a 45 floor skyscraper intended as a financial centre, which was transformed into a self-managed squat with school, church, shops and services accommodating more than 3000 people. With his unité d’habitation the Cité Radieuse, Le Corbusier achieved a similar social plan: a school on the roof, shops and a hotel on the 8

Guiding lights
How can the perfect architecture for a democratic society be thought through?
raumlaborberlin invokes other guiding figures who have fed into its thinking: the architect Yona Friedman has dedicated his existence to the question, developing his great manifesto project the Spatial city, a town made up of mobile cells in the service of the inhabitant, the conception of a new social space, a harmony between mankind and its environment. Friedman prefers the concept of self-planning to the concept of self-building: users conceive their own built environment, in an approach to architecture that is open and accessible to everyone’s interventions.
Another major influence, Hans Walter Müller, also theorises space: to him, inflatable architecture remains the perfect answer to numerous contemporary questions, by injecting a light pulsation, full of life, into the habitat. The mobile and ephemeral structure of his studio is a new example of realised utopia.

The prospective studio
As a community, raumlaborberlin does not believe in the figure of the all-powerful architect, and privileges collective working, which allows ways of living and building together to be experimented with on a daily basis.
So, beginning with the context and the body of references that it has inspired in them, the members of raumlaborberlin jointly envisage the transformation of the LiFE into an open studio, a laboratory of reflection on the collective habitat, a site of production and an exhibition that could recount a history of Saint-Nazaire imprinted with community life and work and ask the following question: what contemporary form could this history take? Into what type of space do we wish to project our ideas and our dreams?

The Drawing Space
Raumlaborberlin give over a substantial place at the heart of the exhibition to architectural drawing, produced collectively and by hand. Between Yona Friedman, Archigram and Keith Haring, the collective’s drawing sheets mix quick sketches, Pop Art-accented collages, comic strip-like storyboards and large utopian or extraordinary architectural illustrations. The propositions not only concentrate on built structures but also on exchanges within the group: they give resonance to human forms and relationships. With these drawings, raumlaborberlin does not claim to deliver authoritative solutions to spatial problems; instead it underlines some incoherencies, highlights potential stimulations of urban space through collective action, or sometimes anchors fiction in reality.

Stronghold
The submarine base as seen by raumlaborberlin is highlighted as a site of energy, a hub, a fabrication tool for the town. It resembles a stronghold, a rock on which a castle could be erected and a metaphor for the communal environment. The exhibition inside reveals a storage zone holding construction materials recycled from some of the waste from STX France, the company that manages the construction of large liners in Saint-Nazaire. Out of this landscape emanates the raw poetry of the inventory, an eclectic store sketching a portrait of port activity that is both a hotbed for the industrial present and the substance of the exhibition. The project mobilises the participants in the recycling industry in general: the construction sites (through GDE and Veolia), but also other partners such as the local structure that manages recycling centres, the collectors (through a reinsertion organisation that repairs refrigerators), institutional caterers (who supply very large amounts of cans and canned goods).
The materials are borrowed and returned, temporarily removed from the circuit of exchange that they represent —the management of waste is now a financial godsend. Close to the shipyards and their floating apartment blocks, raumlaborberlin captures this local resource and repurposes it to imagine habitation cells, pavilions, or more informal nests, potentially destined to leave the LiFE and contaminate the town, colonise it in the botanical sense of the term, and reinvent it.

Open Town
The result of a working practice that is both discursive and programmatic, these dwelling modules trigger question after question: with construction sets of collected materials, raumlaborberlin examines the economy of architecture, the concept of the sustainable city, urban cohesion, the place of the expert and the user. The public will be able to try out sets of modules and processes of creative transformation through several workshops, in advance of and during the exhibition, which put into practice their central notion of co-construction. Define the town fabric, discuss the communal environment and the representation of public space, or imagine the future of the city: raumlaborberlin, between fiction and pragmatism, offers the public of the LiFE a chance to test out the town as a cultural site of exchange favourable to a re-enchantment of ways of being together. 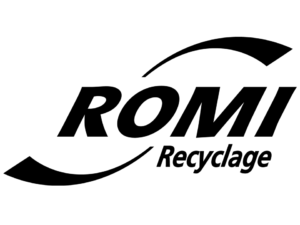