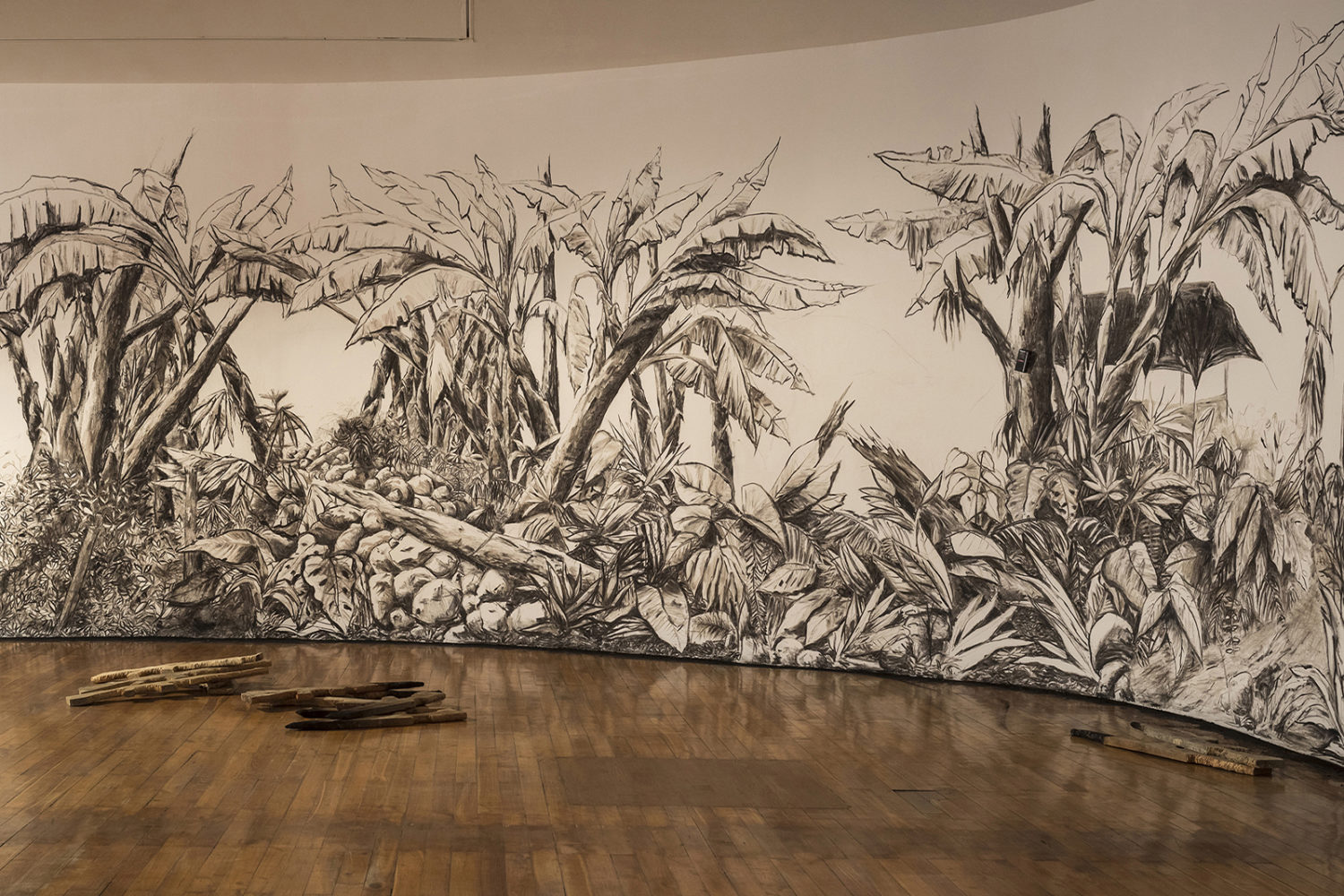 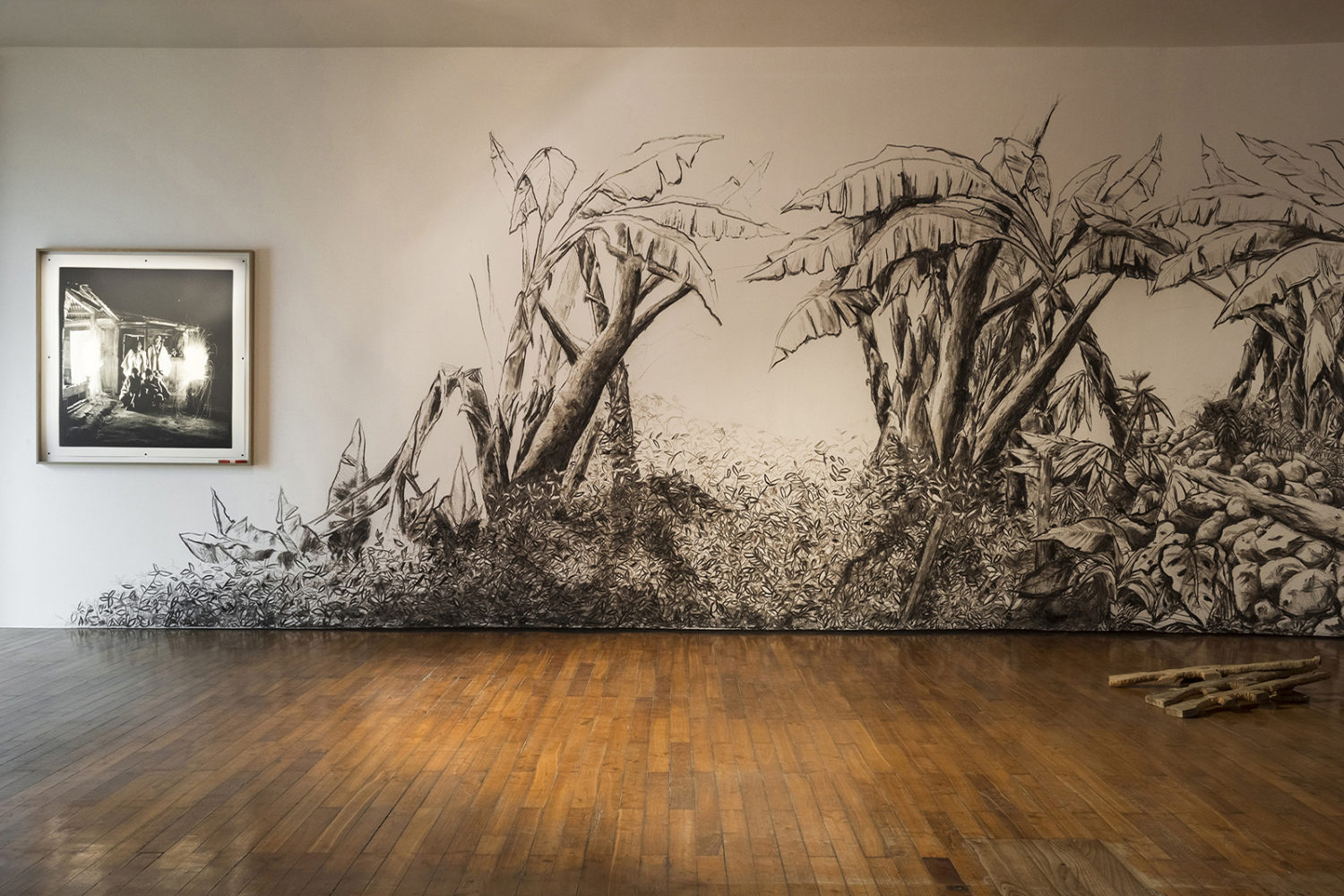 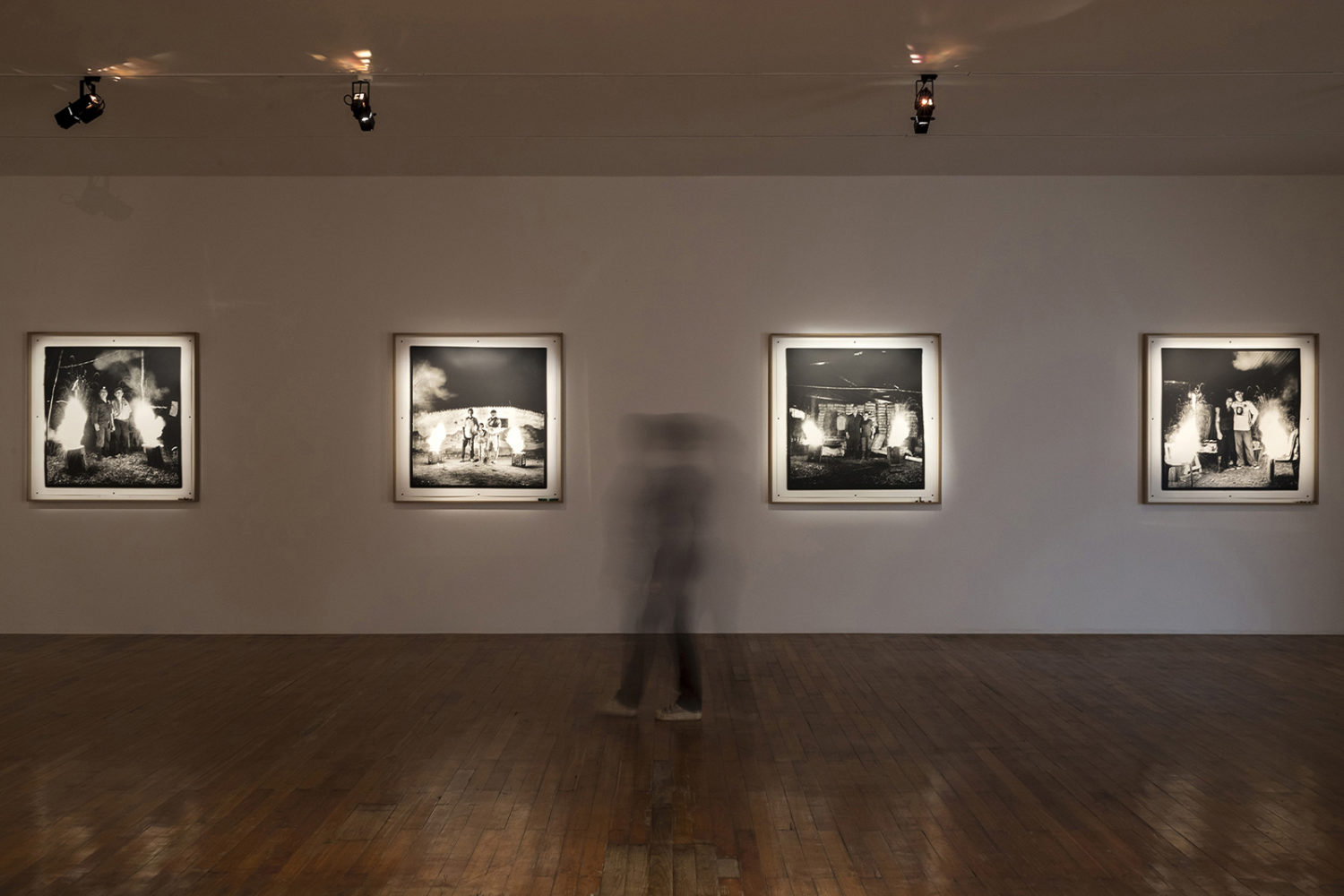 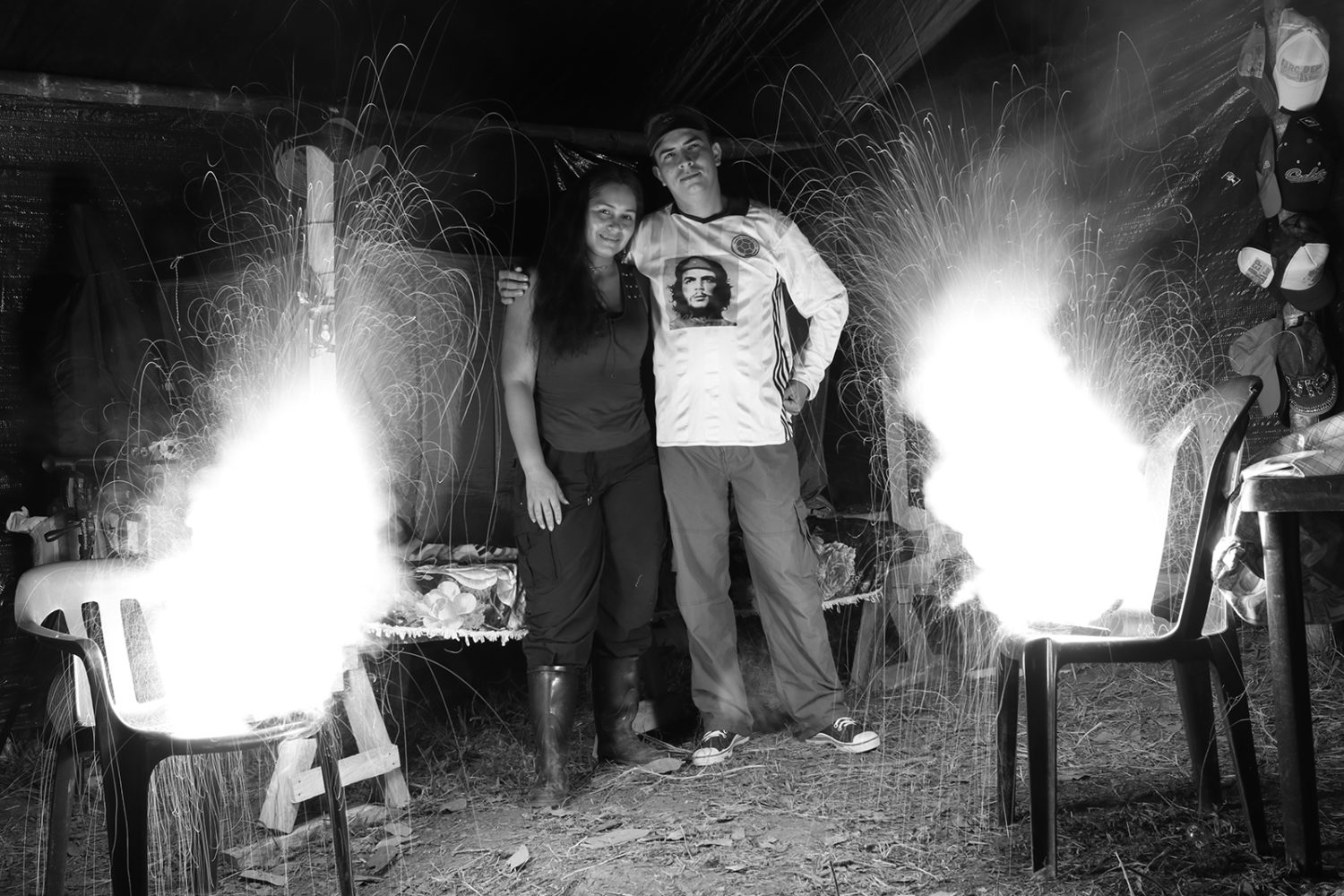 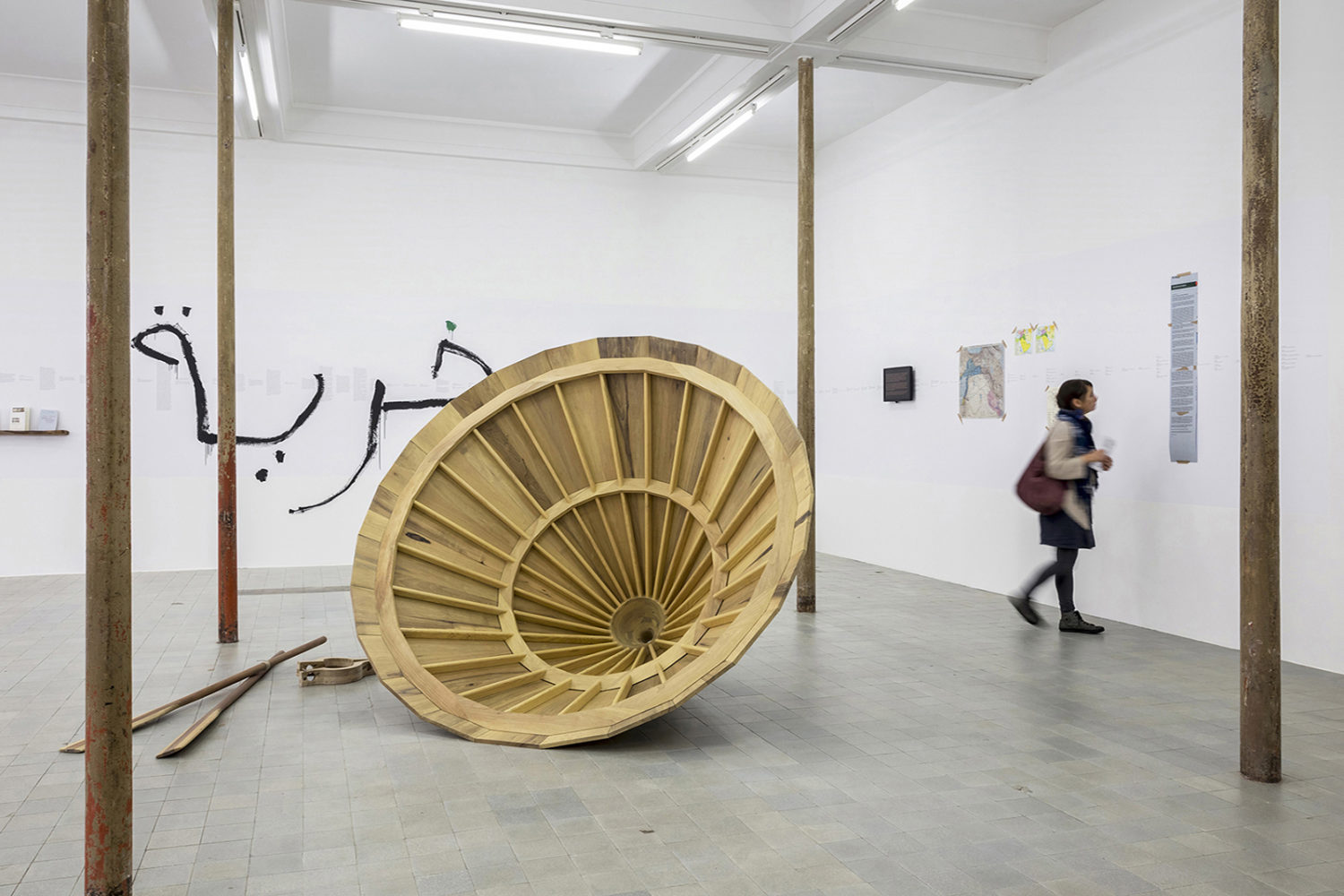 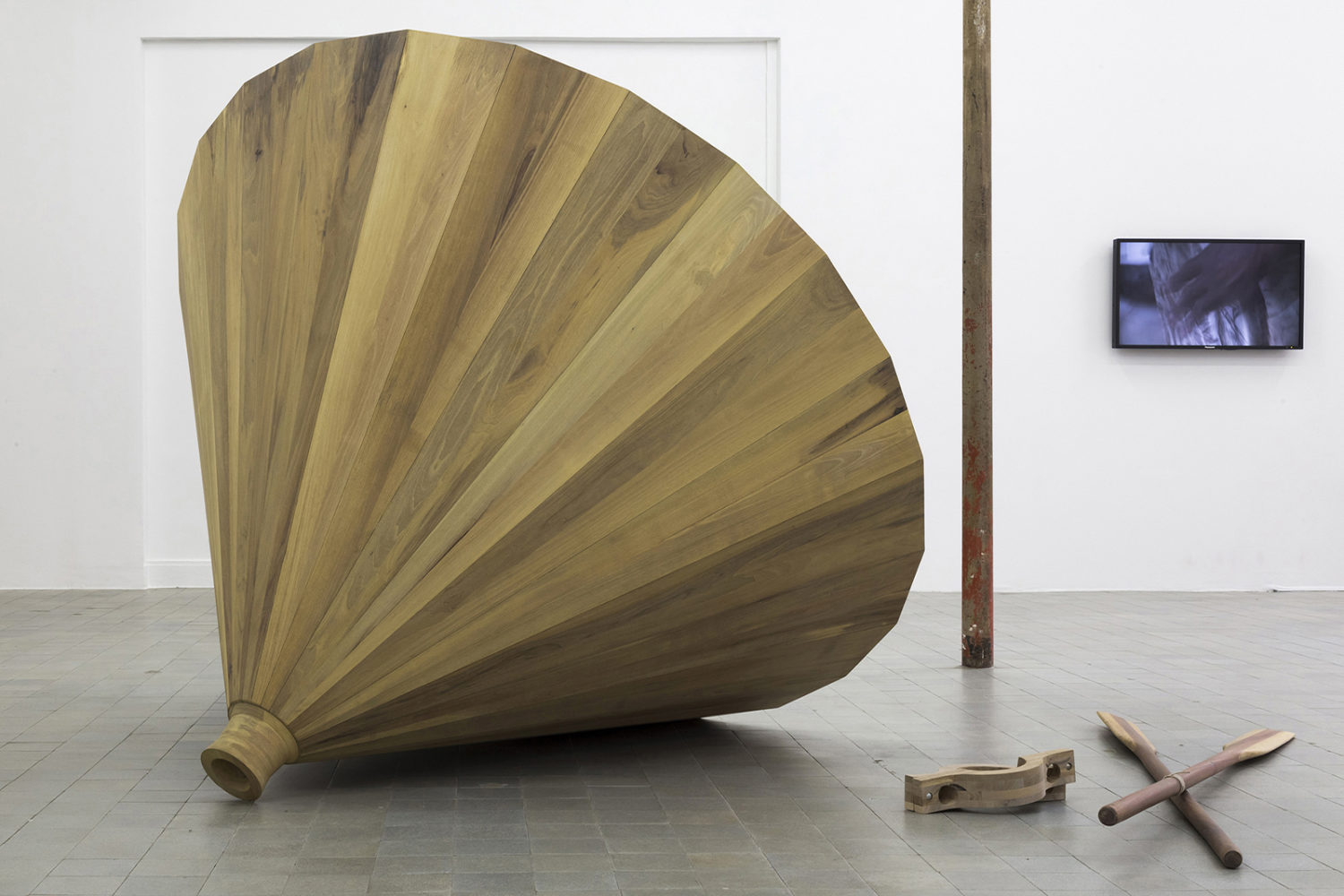 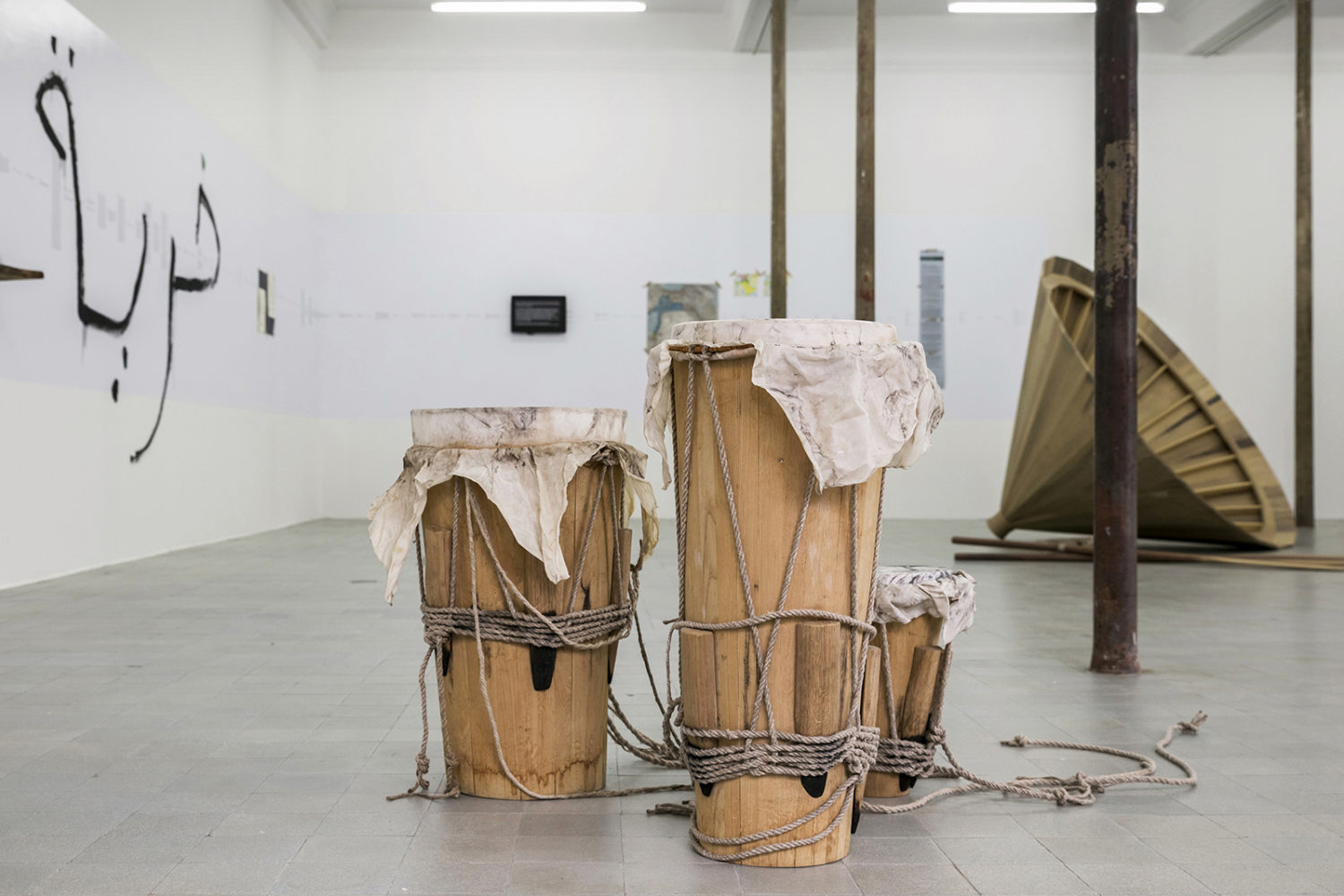 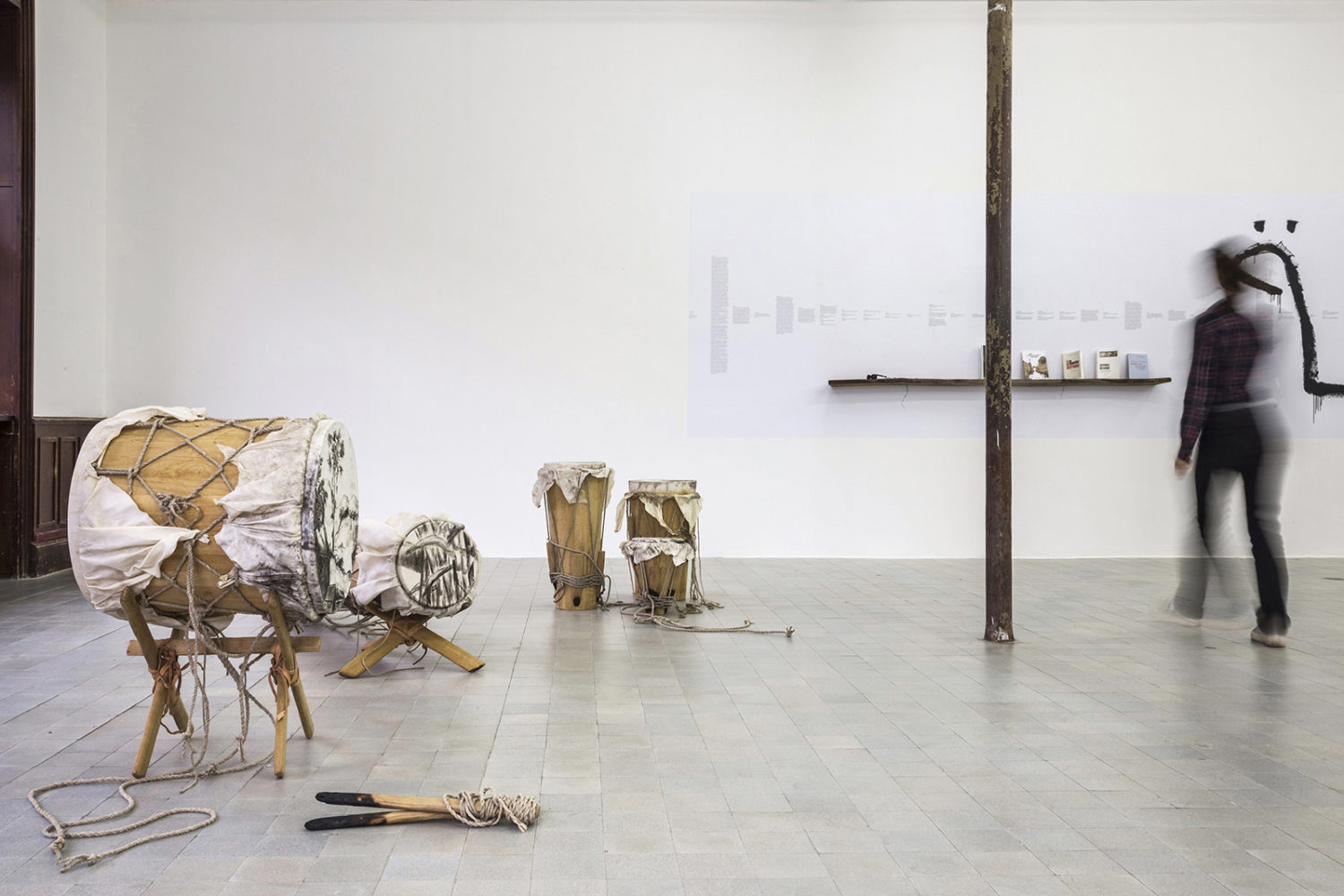 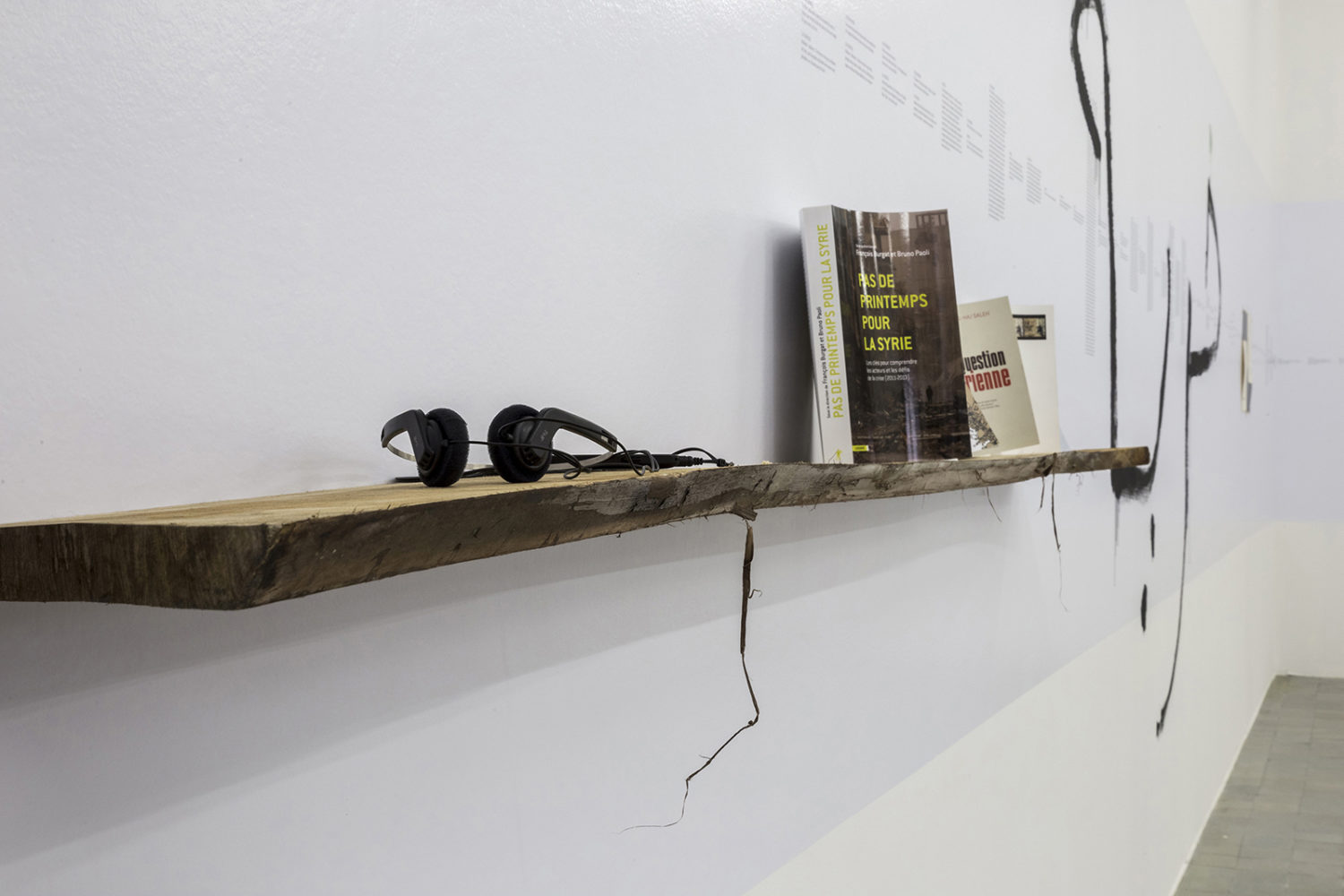 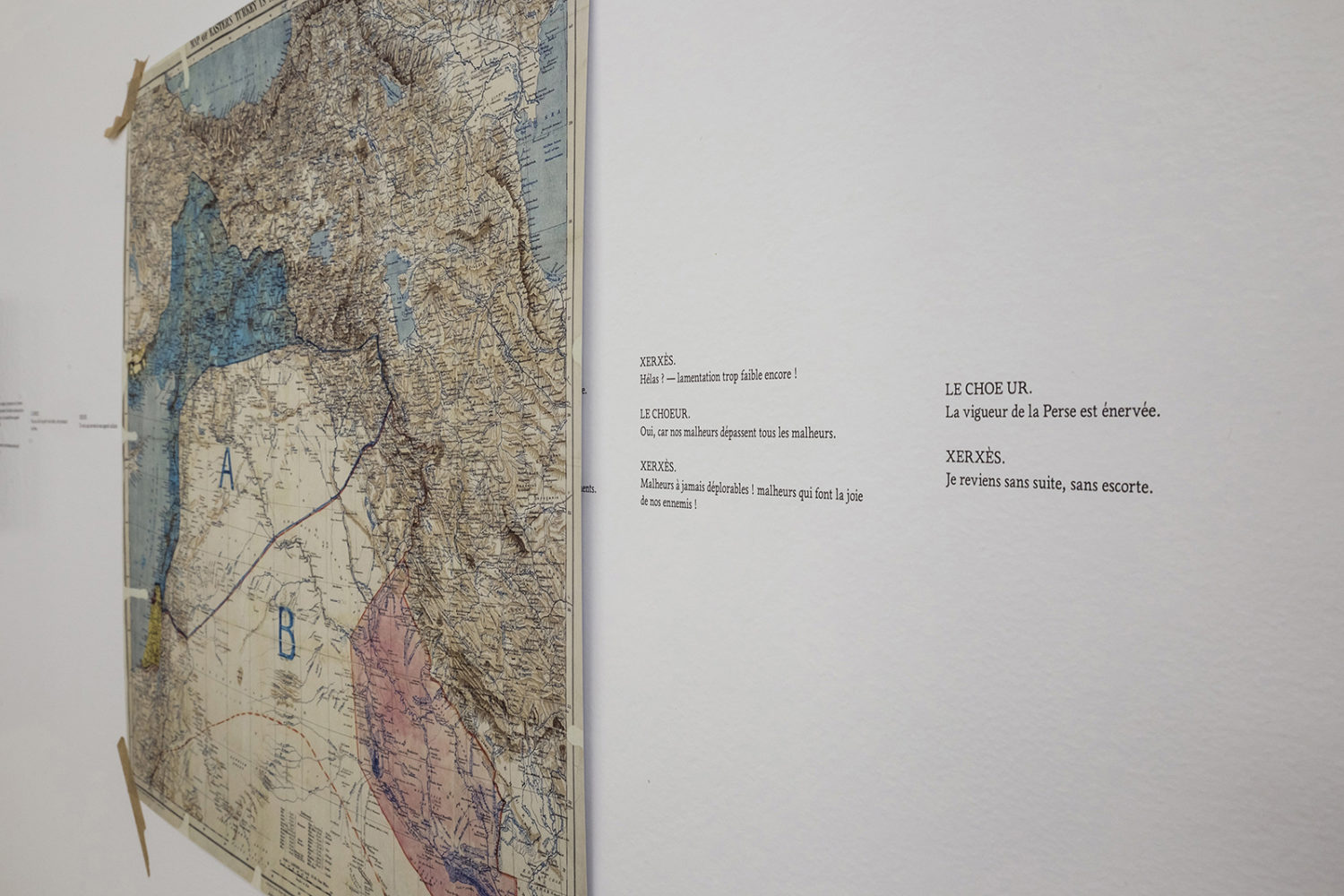 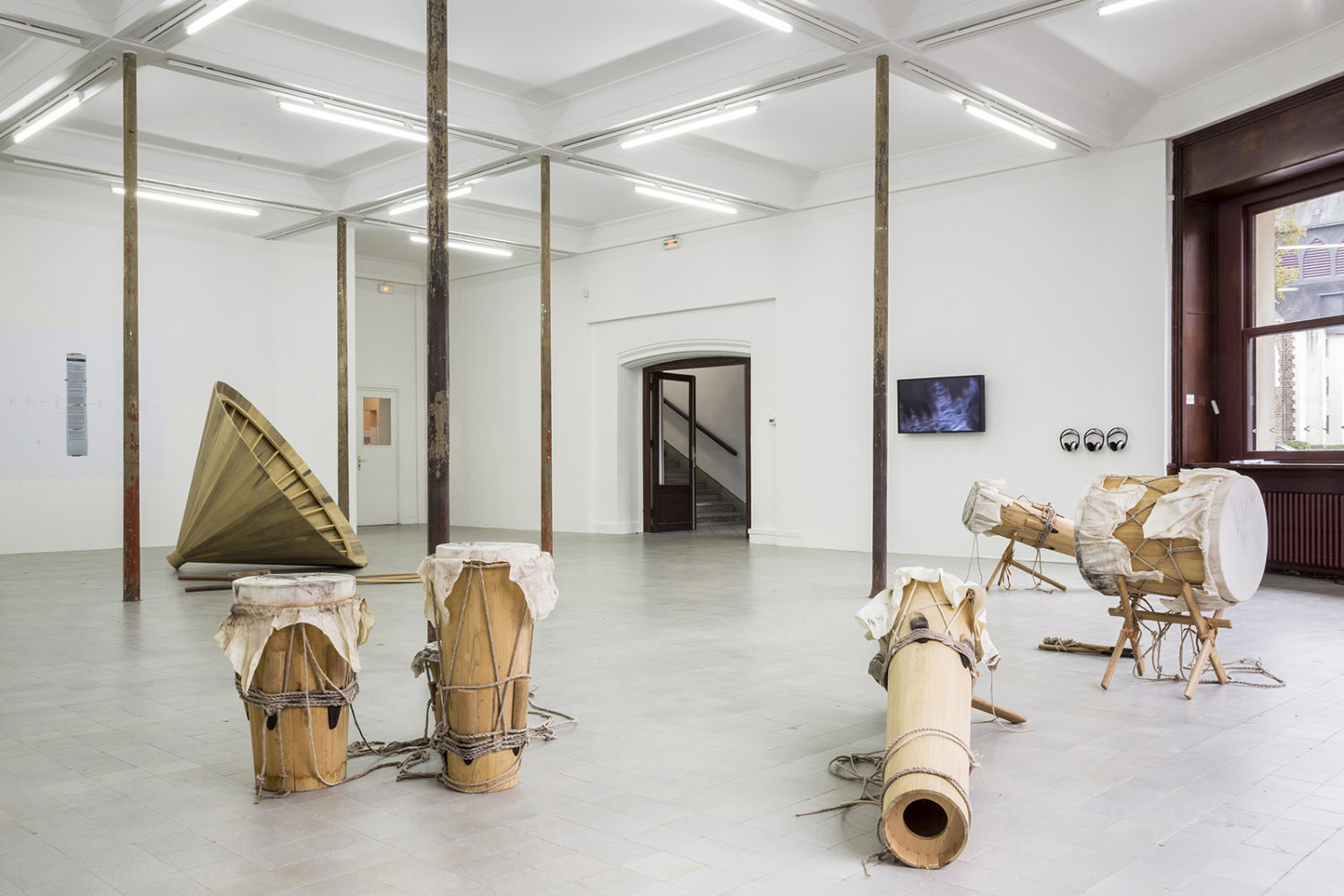 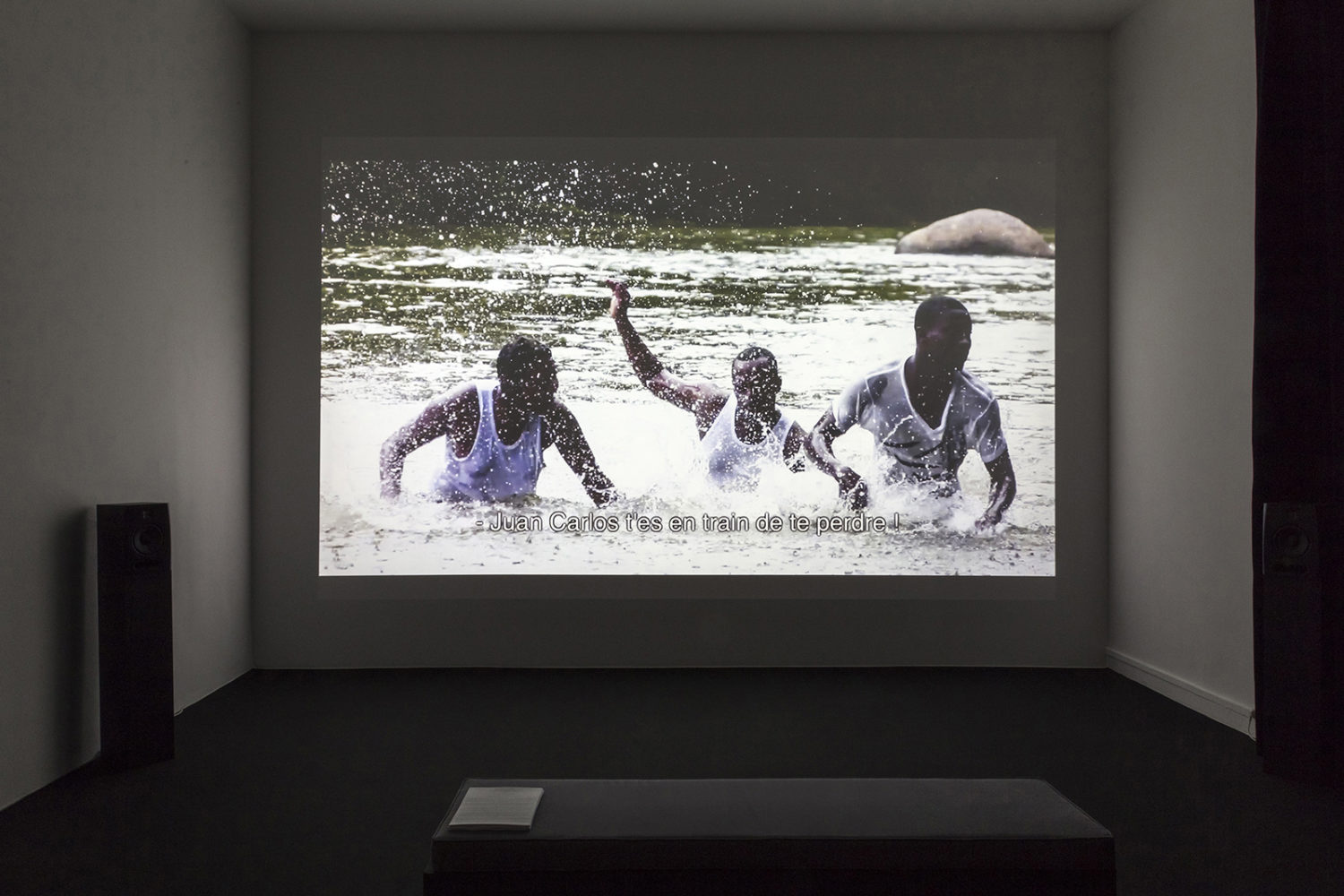 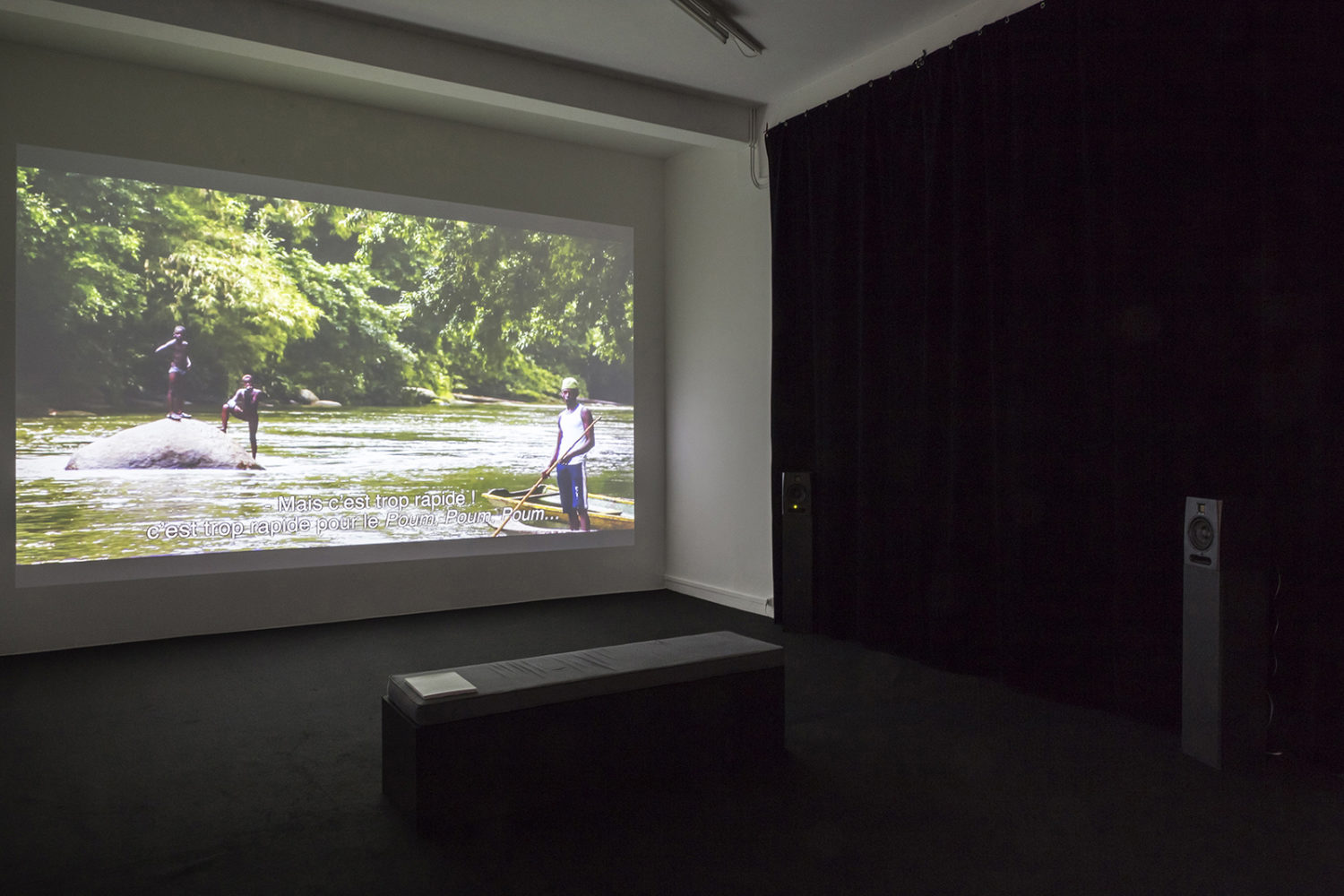 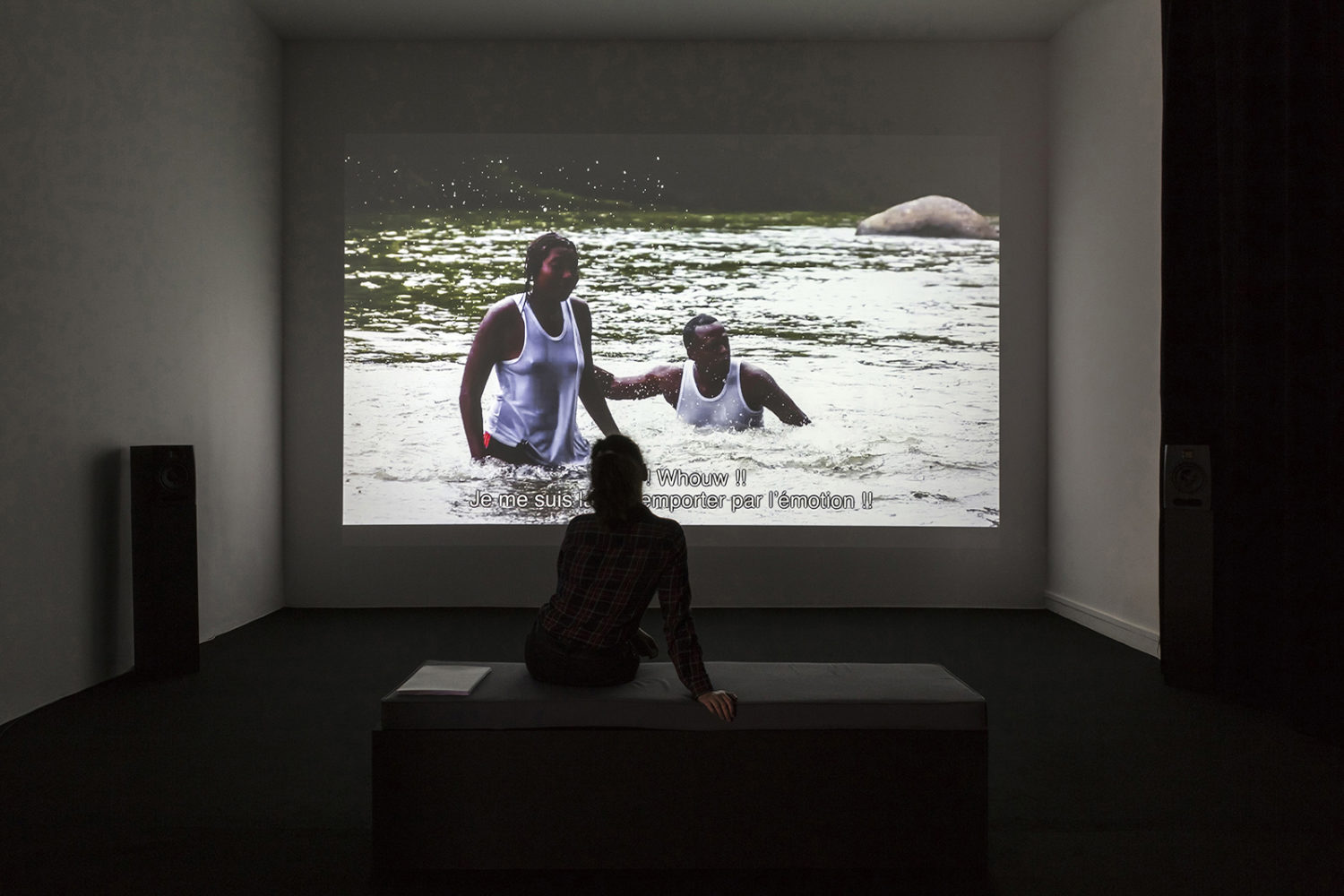 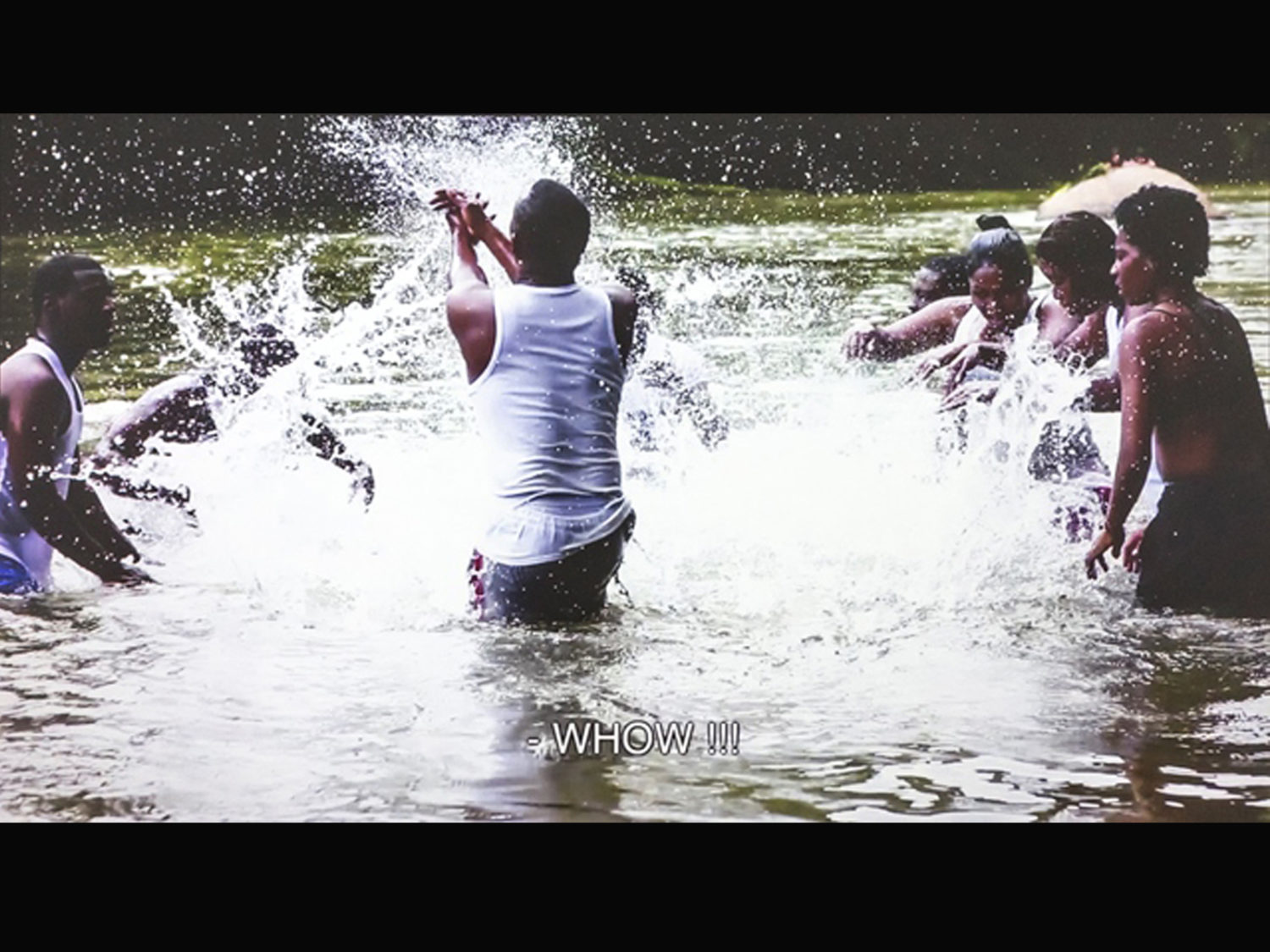 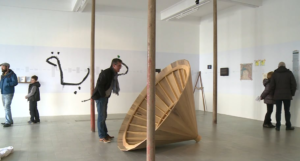 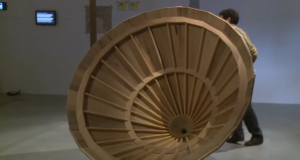 Marcos Avila Forero is an artist in movement, working in the field across the furthest reaches of the world. His interventions within specific contexts condense the force of activism with the power of poetry.
His work is balanced between a keen awareness of the world and a profound sense of myth, involved with questions of language and displacement in a spirit of humanism and engagement. The Colombian artist is driven by personal conviction, working closely with communities and endeavouring to convey their little-known combats. He often chooses to align diverse realities that at first seem far apart: at Le Grand Café – contemporary art centre, Saint-Nazaire, he crosses the current situation in Syria with the Columbian peace process and the question of colonisation.
To illuminate these elements, Marcos Avila Forero draws readily upon the art of the past, from Greek tragedy (The Persians by Aeschylus) to Pasolini’s documentary research (Notes Towards an African Orestes, also inspired by Aeschylus1).

For ‘Vibrating things’, he brings key works from his career together with creations made during his residency in Saint-Nazaire. The exhibition will be constantly reconfigured by ongoing research, performances and the results of these encounters.
His leitmotif, the human encounter, relates politics to the body and explores the notion of social action. The exhibition is therefore like an open-ended musical score that invites the public to reflect in a universal sense: which instrument should you play in the face of oppression?

The artist has imagined a dual and paradoxical object for the large ground floor gallery: a monumental loud-hailer which is also a usable and mobile boat that could potentially be displaced in the public space and at sea. This new production, an object that is at once floating, musical and sculptural, is made from walnut wood. The material refers to the long artisanal tradition of Syrian lutherie2, and the structure recalls both the body of a guitar and the ribs of a ship’s hull.
How can war, violence, exile be spoken about other than through the prism of the dominant media? With this functional sculpture, Marcos Avila Forero imagines a symbol that can be appropriated, an amplifying filter that different participants, researchers and actors will be activating. Their words will bring in texts related to the Syrian conflict, which will be laid out in space on the walls of the exhibition, transforming it into an agora or assembly. In this way, Marcos Avila Forero is proposing a contemporary rereading of Aeschylus’s The Persians as a tool to investigate the present. The Persians remains to this day not just the first play for which a written trace has been conserved, but above all one of the only Greek tragedies to take on current politics, reflecting the war that was raging between the Greeks and the Persians. Marcos Avila takes his inspiration from this Antique text with its maritime setting, and confronts it with a contemporary tragedy, interconnecting the stories and the timescales, and emphasising live speech as the best means of transmitting the experience of displacement in space (exile) and in time (memory).
This installation seems clearly marked by the spirit of the Brazilian dramatist Augusto Boal: the creator of the Theatre of the Oppressed always advocated contestation in and through doubt. He declared: “If you offer certitude before doubt, you are not responding to any necessity. Political theatre was once univocal, it gave the right replies. What we are trying to do today is to ask the right questions, the best of them to my mind being: what question do you want to ask3?”
Marcos Avila Forero takes the same artistic and experimental approach, looking for a collective form, engaging with the human being and the acceptance of responsibility.

In counterpoint to Another ‘Persians’ by Aeschylus, the Palenqueros are displayed in the large ground floor gallery. These drums are metaphors of travel, mixing the history of the triangular trade in France with the history of Palenque culture, a community that developed from rebel territories built by black fugitives in Latin America during the colonial period. In the exhibition, the graphic surfaces of these ‘reinterpreted’ instruments have an unseen dimension of social contestation. This transposition, between image and percussive language, between past and present, between here and elsewhere, is characteristic of the world of the artist’s imagination, one that opens up in the processes of translation and historical merger, linked to everyday objects as custodians of a long artisanal tradition.

When the artist produced these drums, his major concern was that they would not reverberate: the video Un Pechiche para Bencos demonstrates the opposite. It retraces a performance by Emile Biayenda, musician who sought the inspiration for his rhythms in the musical roots of the alarm drum, reinterpreted from contemporary material elements. The text that accompanies these images poetically crosses the destiny of two personalities who incarnate two epochs, just as the drum links the colonial period and the present-day. With Benkos, a black revolutionary who was the first to stand against the Spanish crown, before even Bolívar, and with Camara Abdelaye, an illegal immigrant now living in France that the artist has been politically involved with, a community reveals itself in the hold of a ship transformed into a sound box.

In the smaller ground floor gallery he once again approaches the question of transposition in the video Atrato: sound is revealed as a liberated material that disregards borders in the poetry of water surfaces transporting sound waves. In these images, the artist is filming the Atrato, a river that traverses the Choco? forest in Colombia and is the arena for frequent armed struggles. Flanked by a team of researchers (anthropologists, ethnomusicologists and musicians), Marcos Avila Forero suggested to some residents of Afro-Colombian origin that they rediscover an ancient local custom of striking the surface of the river with their hands to produce a bass sound capable of reverberating for long distances.
This transforms the river into an instrument, a cathartic support for the population who use particular percussive techniques to replay a composition that evokes the sounds of explosions, bursts of gunfire and the impact of bullets. In the dance and in the sound material, the artist and the community that he mobilises reinvent a paradoxically joyous and emancipatory coded collective language.

Memory and reinterpretation: on the first floor of the art centre, Marcos Avila Forero creates A san vicente, training exercise, a large mural made from burnt wood, replaying in his own way scenes from guerrilla life in which combatants train using fake rifles sculpted in wood and imitate the sound of bullets with their mouths. The transposition is destabilising and intimate: the traces of burnt artificial firearms draw a fabulous jungle on the walls, while a small Dictaphone spits out onomatopoeias that are both bellicose and almost childish.
The ambiguity and the contrast between a feeling of unreality and the seriousness of the situation only remind us that the training being evoked is nonetheless real.

So Marcos Avila Forero’s work never stops interpreting the visible symptoms of a violent actuality lived by often invisible communities. His very recent photo series Montañita ZVTN, shot on film, bears witness to this capacity to shed light, literally and figuratively, on the stifled demands and long-term struggles that affect today’s world. The artist makes full-length portraits of couples of Colombian guerilleros using a unique device that repurposes gunpowder, previously a necessity for armed confrontation, to light the photo as it is taken. The poetic effect is striking: bouquets of dazzling sparks and writing in light recalling the early days of photography. Through this choice, the artist also creates a mise en abyme of less obvious processes concerning the historical reality of social conflict in Colombia. For a major part of the population, the only way to emerge from the shadow of history and the obscurity of oblivion was by the flashes of gunfire. Marcos Avila Forero chooses a specific way of presenting these portraits, one reserved for historical figures, as if to further underline the legitimacy of combatants who from now on are counting on political participation rather than bullets. The combatants, framed by the incandescent masses, offer up a particularly calming image in which the possibility of imagining peace can perhaps be read in the hint of a smile.

Vibrating things: what does this title include? Sound perhaps. Light, human beings. All vibration induces movement, which in physics shifts the points in a system from their position of equilibrium to which they, sometimes, return. Whether a gentle wobble or a violent shake, it is a phenomenon that deeply engages the body. Guided by this vibrato, a token of sensitive embodiment, this exhibition formulates the hypothesis of an art of encounter.

Notes
1 – In this film, Pasolini delivers both his interpretation of the myth and his vision of postcolonial Africa: a transitional and ideal moment where ancient and modern societies coexist. Like a floating reference, it inspires the whole of the exhibition.
2 – The celebrated oud workshops have always preferred this wood, widespread in Eastern Ghouta, a currently besieged rebel stronghold to the east of Damascus. Today, this wood is used by the people of Ghouta for heating, and is inevitably becoming more rare. The workshops are closing in massive numbers.
3 – Théâtre de l’opprimé, Éditions Maspéro, first published in1977

Born in 1983 in Paris.
Lives and work in Paris and Bogota (Colombia).
The artist is represented by Galerie Dohyang Lee (Paris) and ADN galeria (Barcelona).