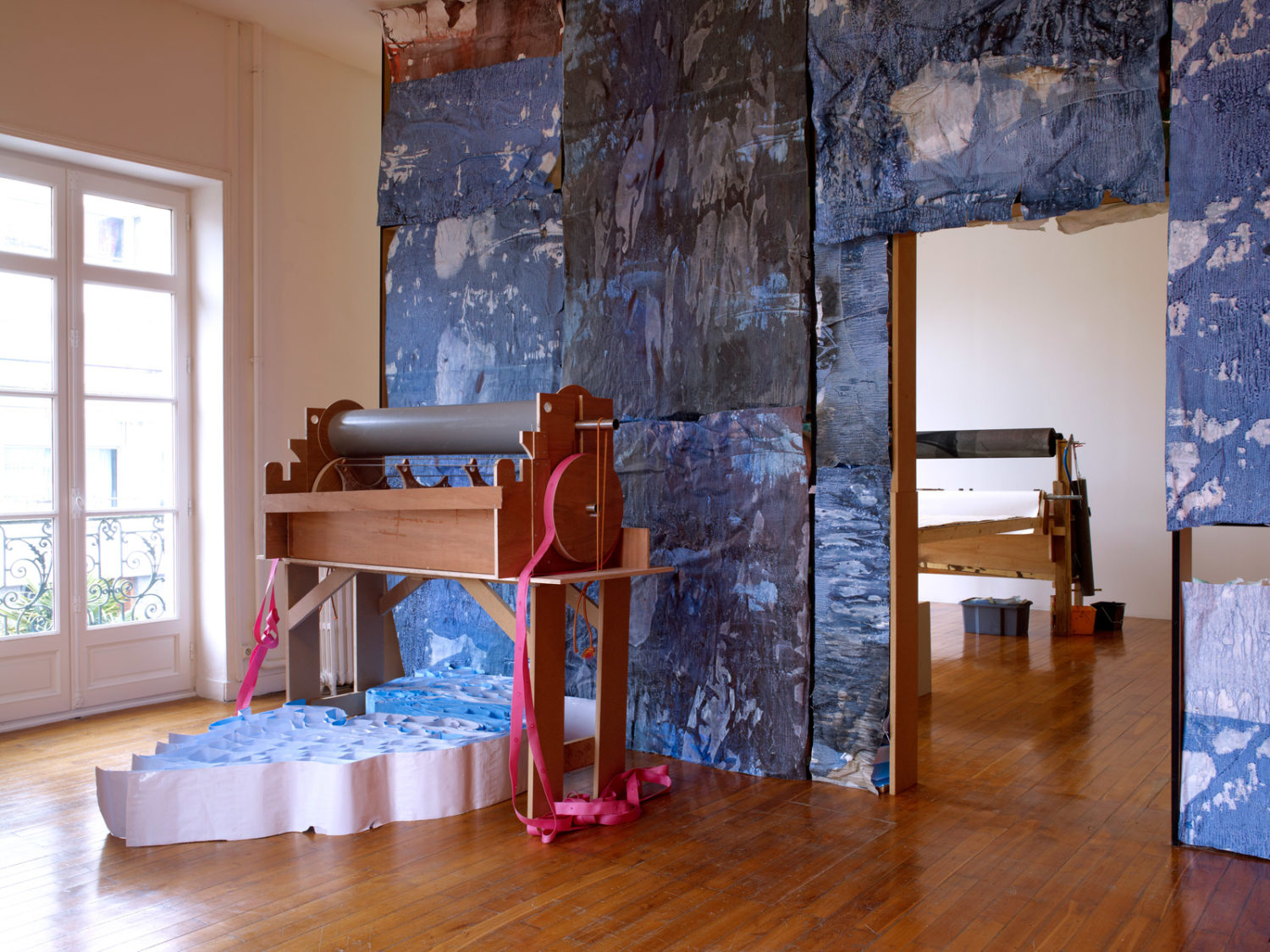 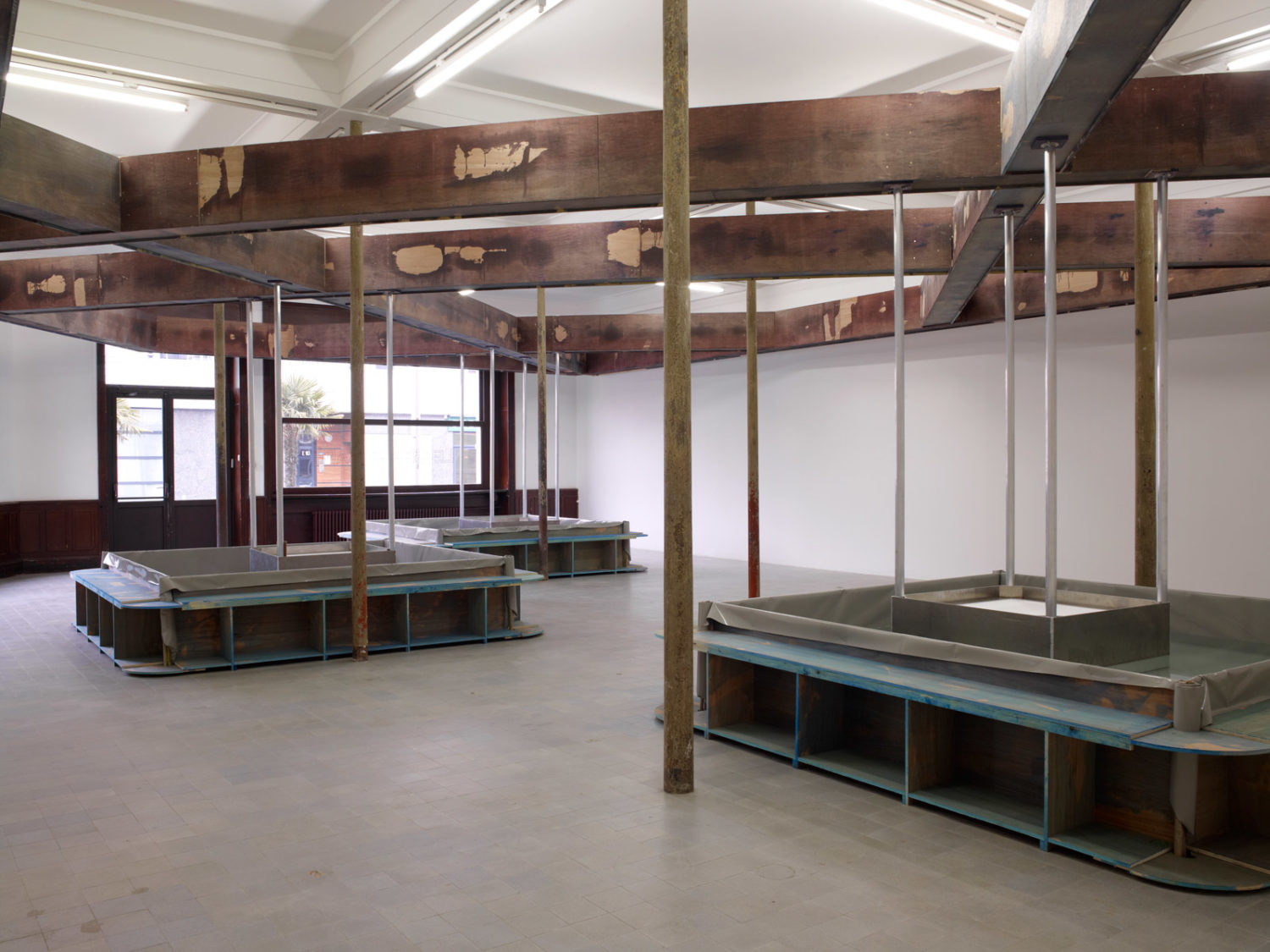 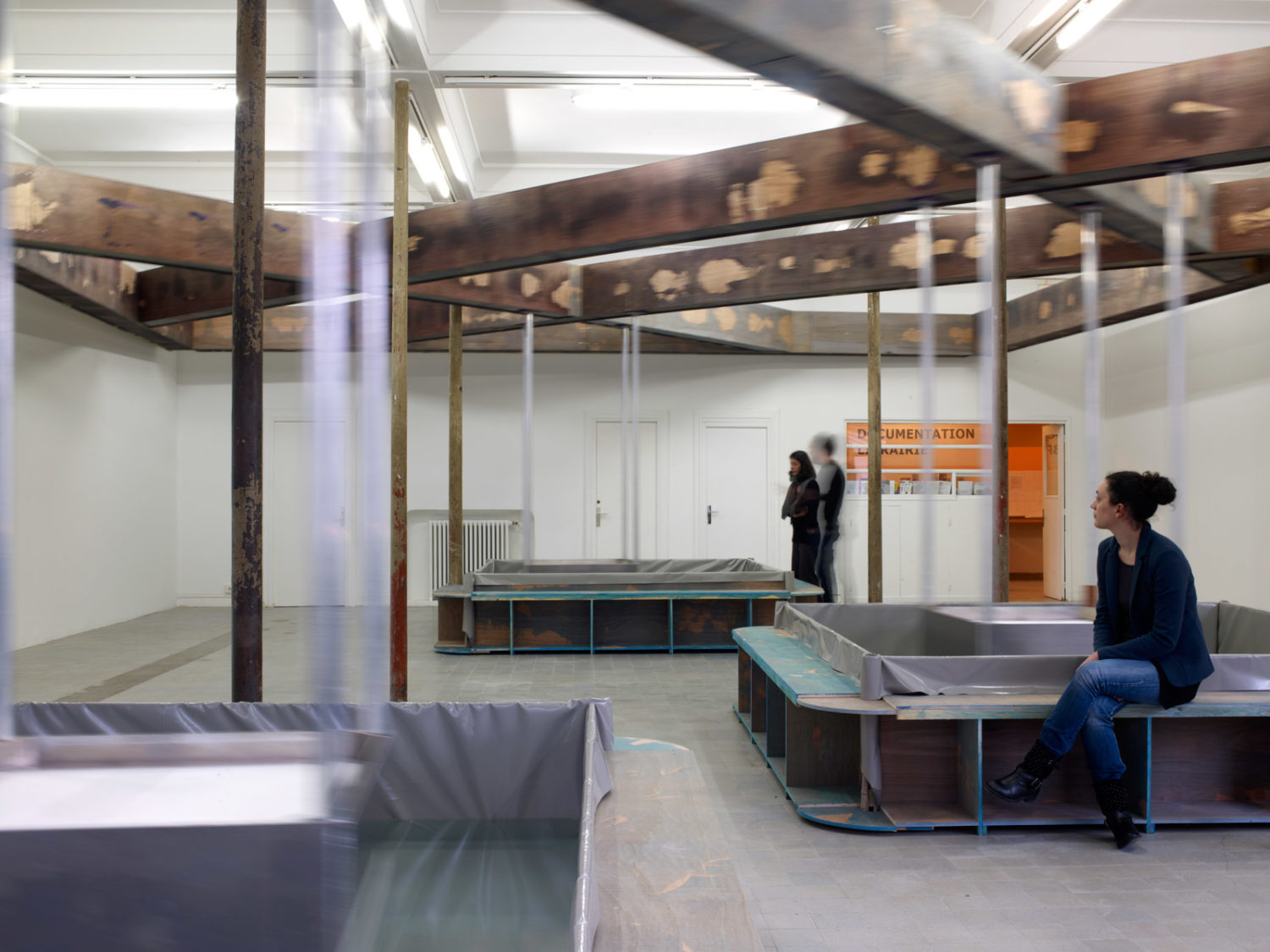 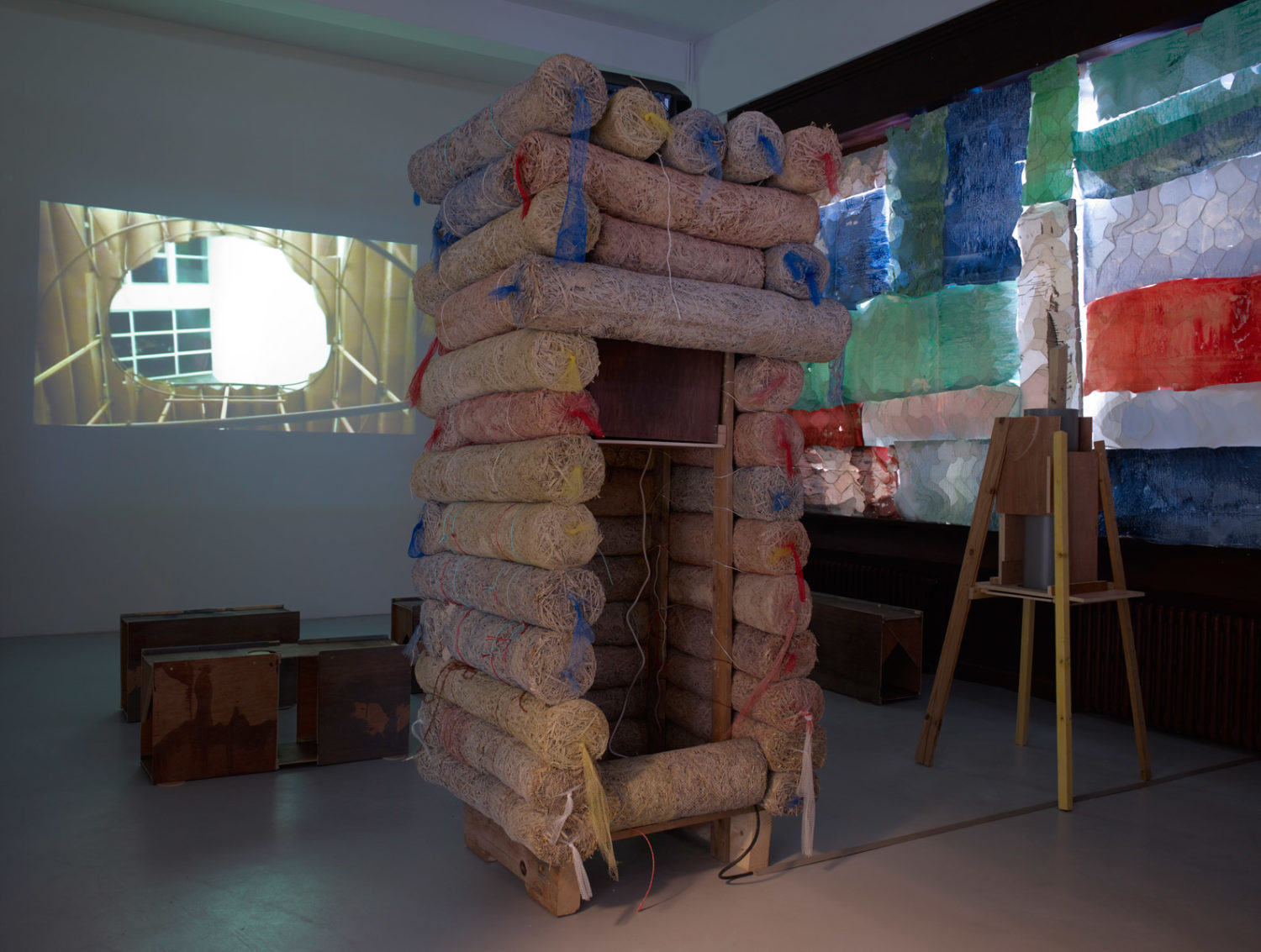 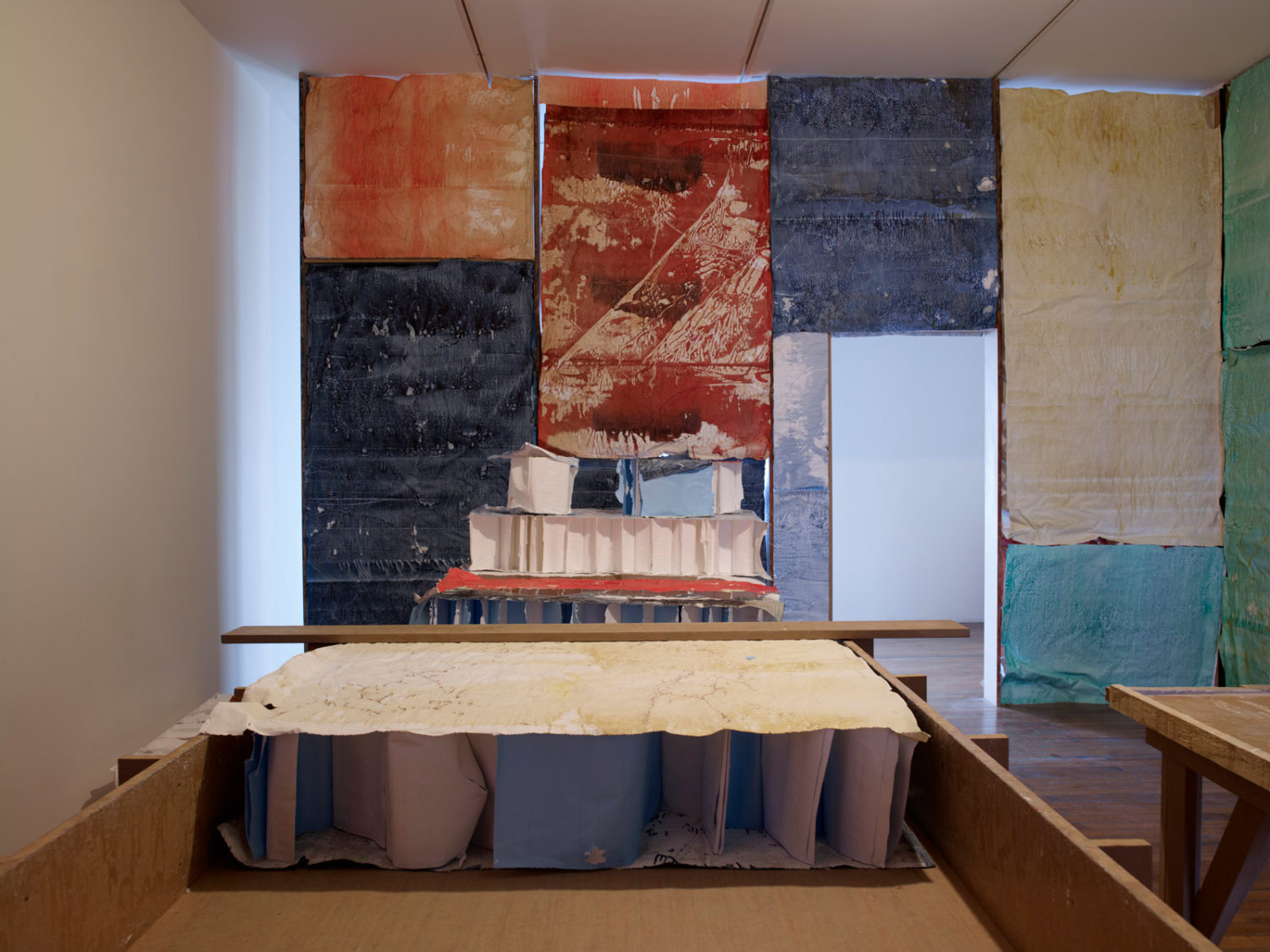 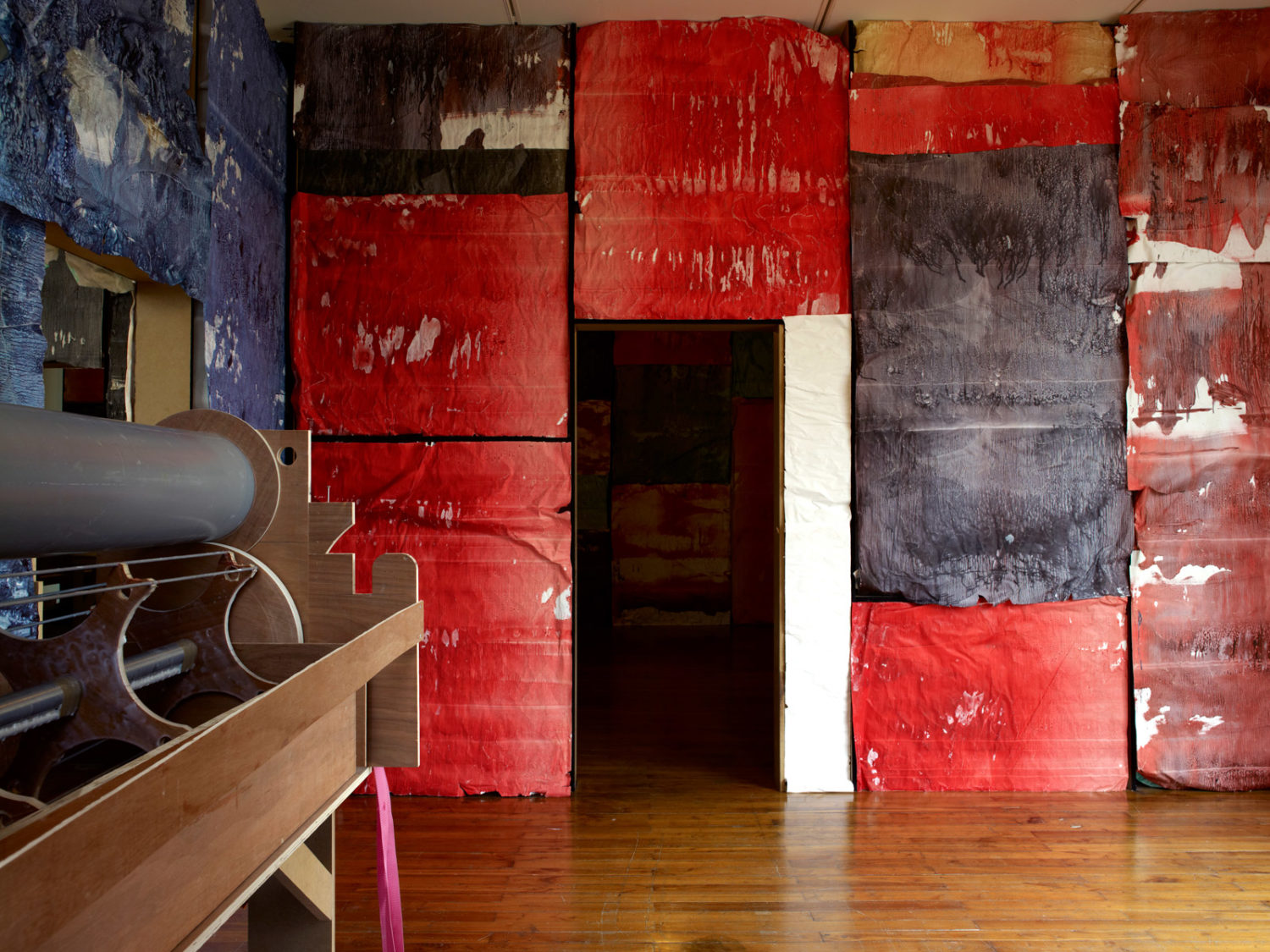 Michael Beutler’s works are intimately linked to the spaces where he intervenes, proposing a singular reading of the invested buildings and responding as much to their volumes as to their history. His ample and generous installations concentrate multiple formal preoccupations. In a first phase of work, the artist mixes the forms of his ‘repertoire’ – the product of precedent explorations – and activates them according to the new exhibition contexts. Michael Beutler’s sculptures are autonomous architectures within the other architectures that he annexes. Without altering the existing space, the excess of his own intervention in a given space totally upends perception. The result is akin to an interpretation of the chosen space, that the work comes to reveal and inhabit. To arrive at this point the artist questions the usual principles of construction. Materials are often used unconventionally: sheets of paper and cardboard, planks of wood, sheet metal, bamboo canes, fabric ties, motors, dyes are put to work following empirical procedures that draw on a form of ‘logic’ proper to the artist’s ingenuity. So Michael Beutler likes to find concrete resolutions in his practice by establishing experimental production lines. Sometimes produced with the help of archaic machines conceived by the artist himself and the fruit of collective labour reorganised in the manner of a free and inventive manual fabrication system, his constructions draw upon contradictory methods and energies: they are both improvised and very precise, considered and spontaneous, imposing and fragile, simple and technical… His sculpture happens at this point of indetermination between finished form and process, bringing about the feeling that the space of the exhibition and the space of the studio have merged. Through this tension, the artist plays on the notions of functionality (of the object, of the production tool) and revision (of narrative, of sensation) at the same time as he persistently interrogates the fabrication processes that shape our everyday surroundings. By creating his own conditions of architectural construction, Michael Beutler attacks with brio the blank flatness of standardisation, at the levels of form and of method. From the practical application of this critical and analytical thinking follow a number of interrogations on our relation (psychic and functional) to this environment and to the notion of public and private space. For Knock Knock, his first solo exhibition in France, Michael Beutler joins the spirits of the Grand Café in undertaking a singular exploration of technique and space – an adventure from which the materials and the spaces come out transfigured. This exhibition has been produced in collaboration with the Atelier Calder, Saché, where Michael Beutler is in residence from January to April 2013. The artist has benefited from artistic research development support by the Cnap (Centre national des arts plastiques). More information: www.atelier-calder.com

Born in Oldenburg, Germany, in 1976. Lives and works in Berlin.