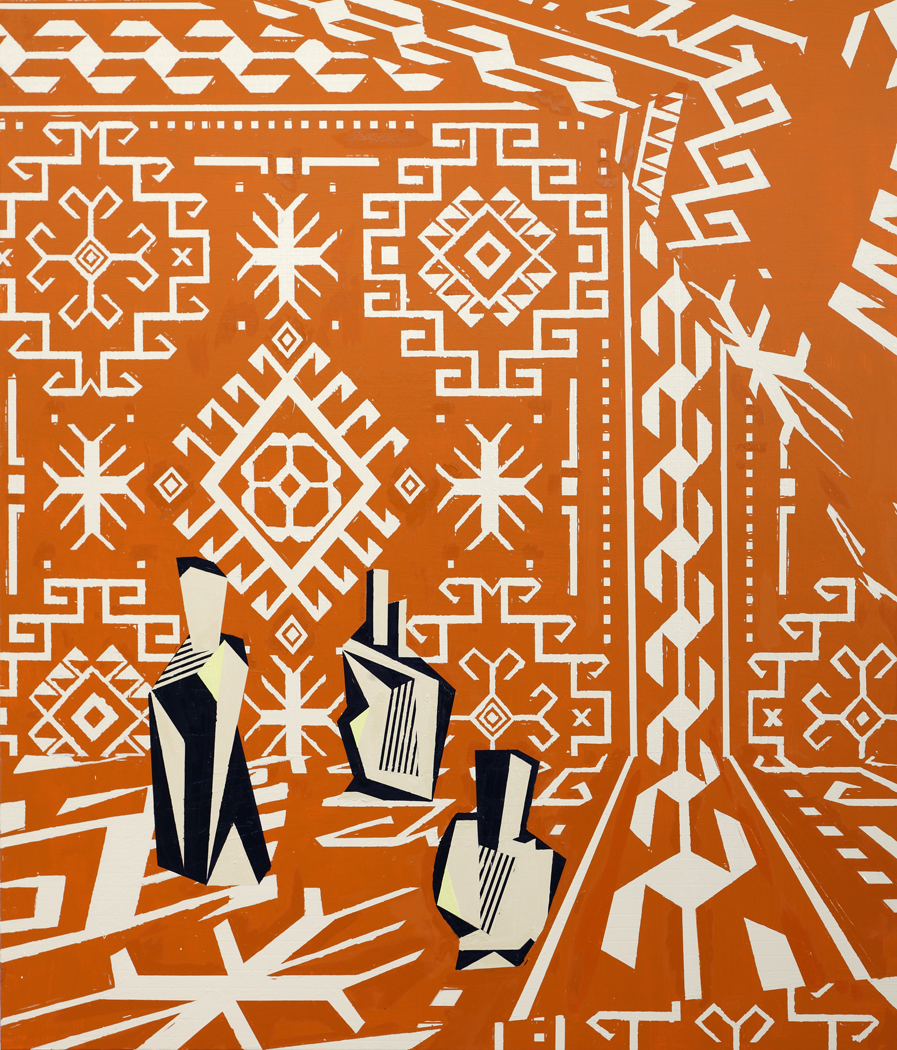 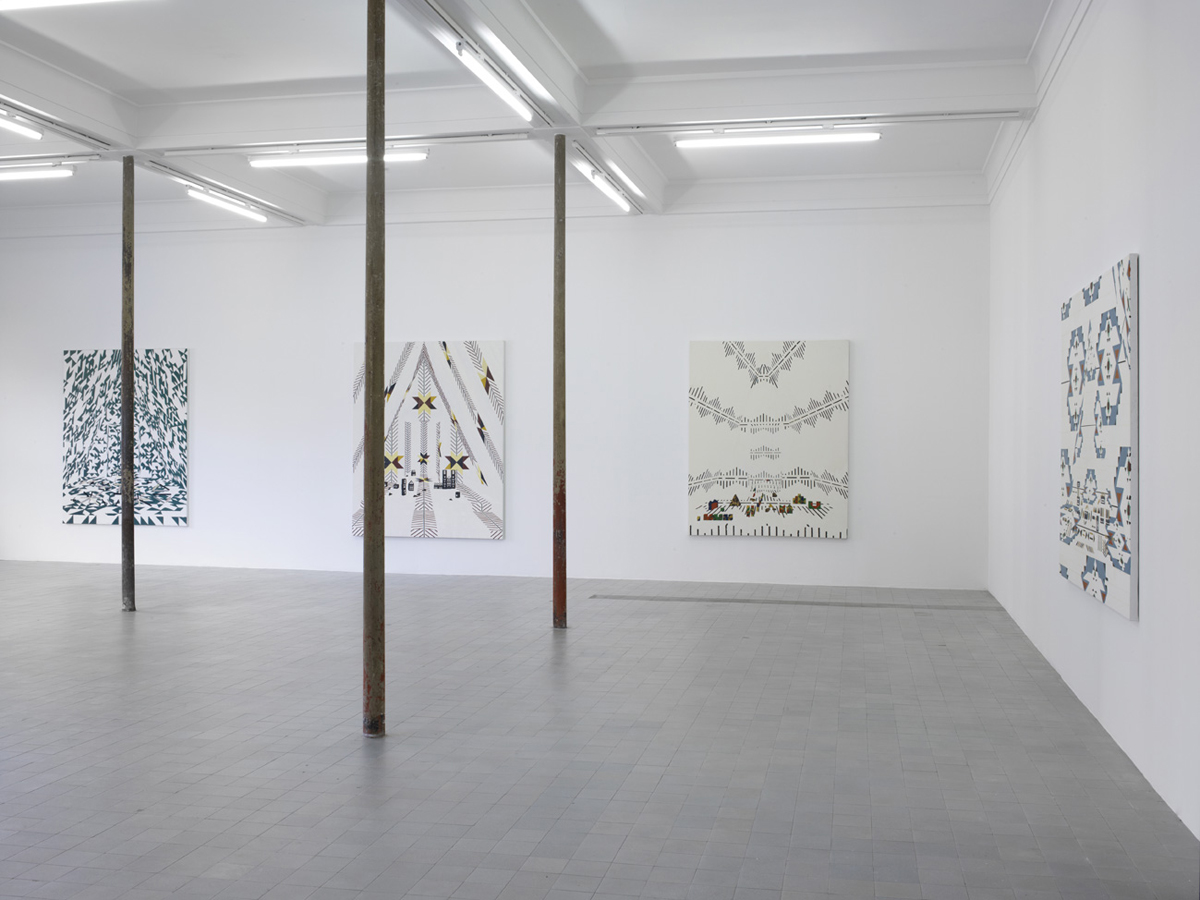 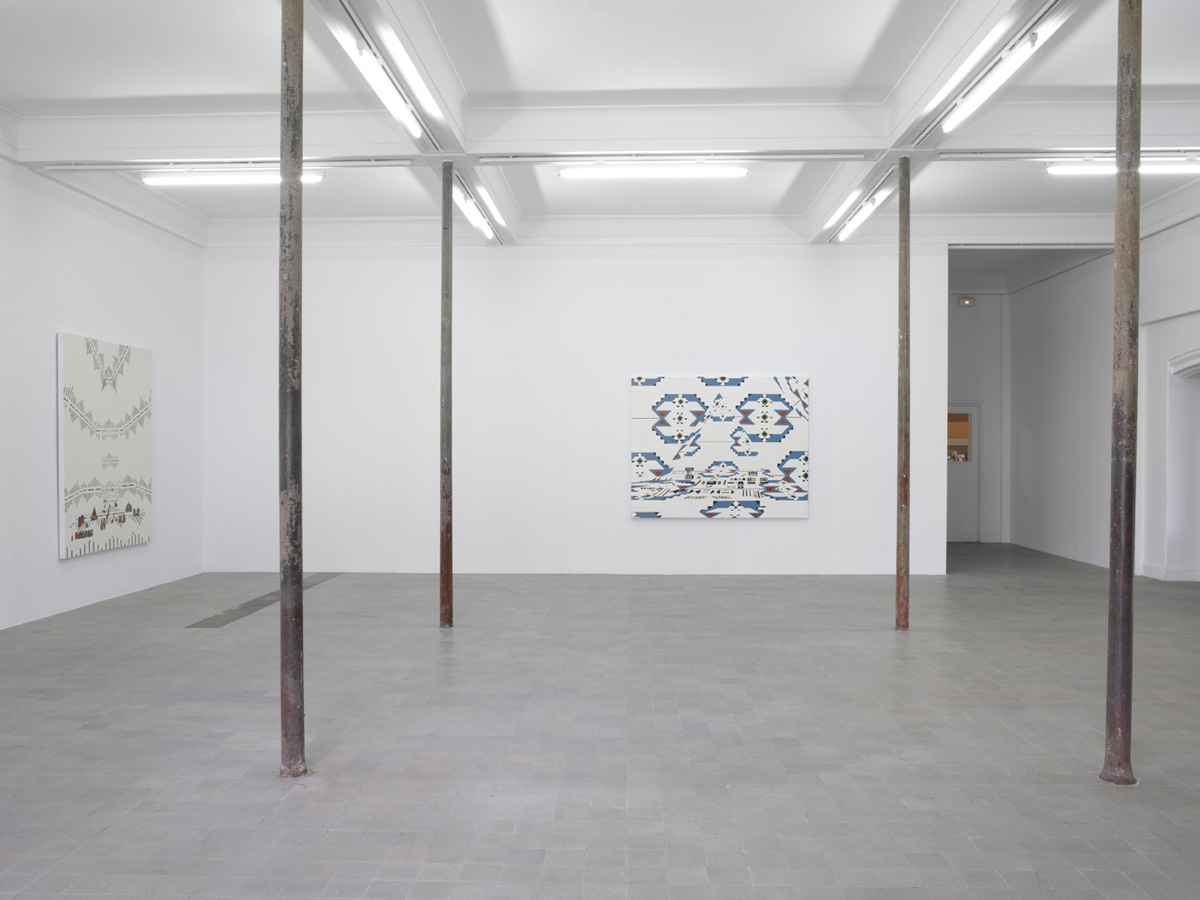 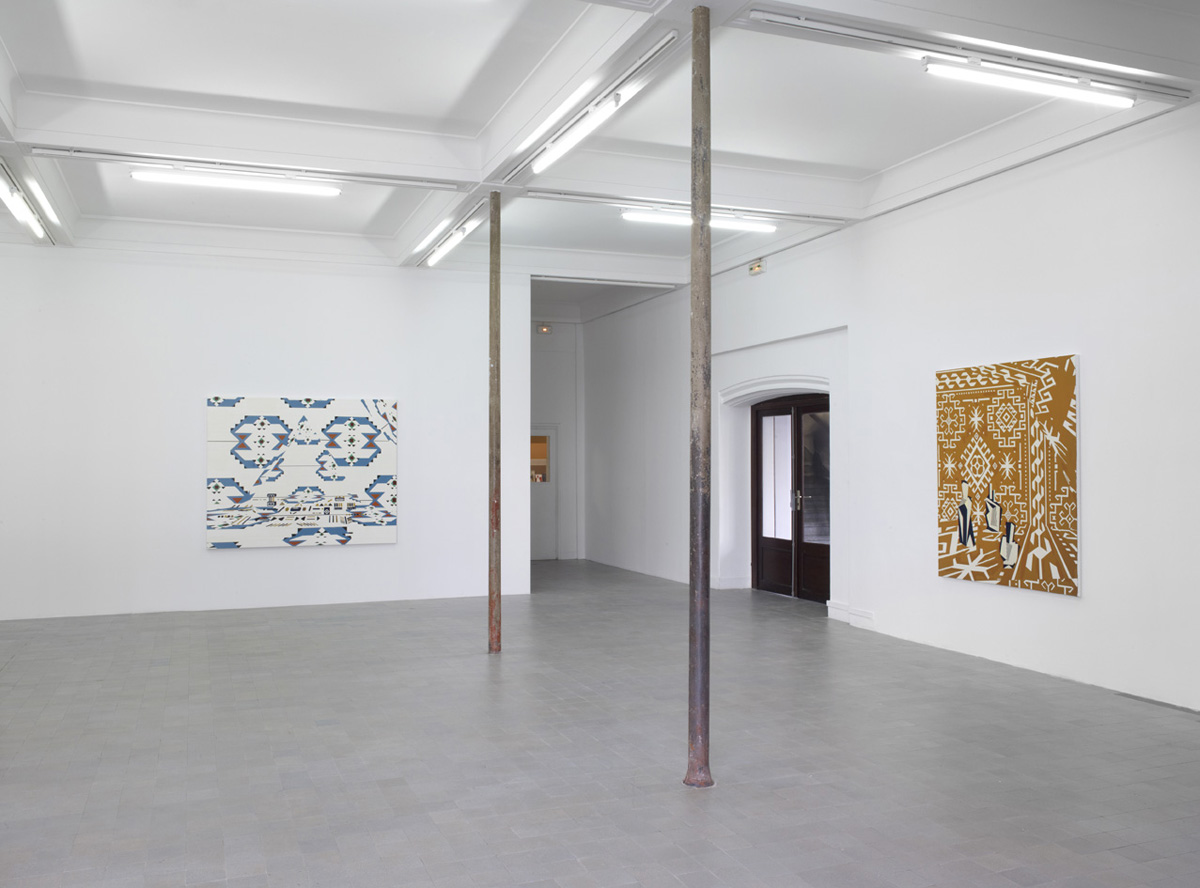 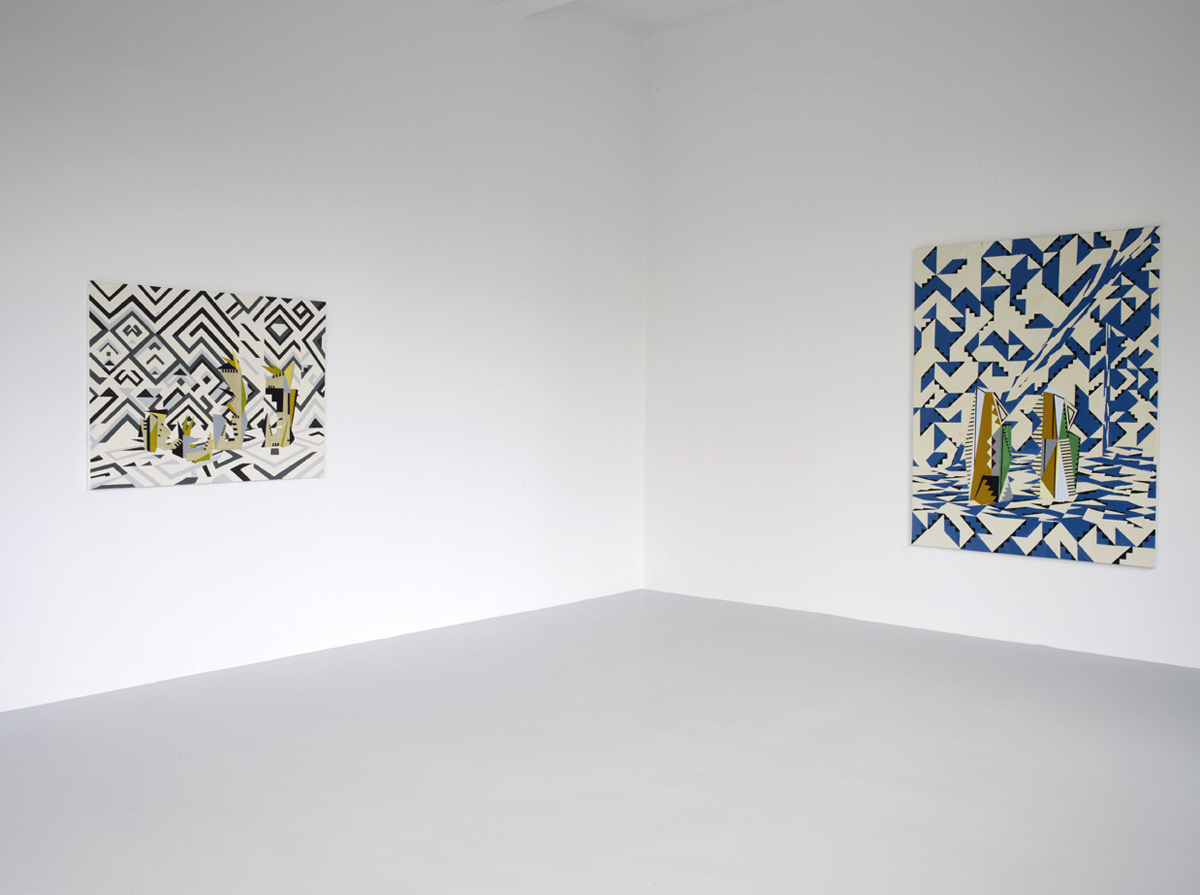 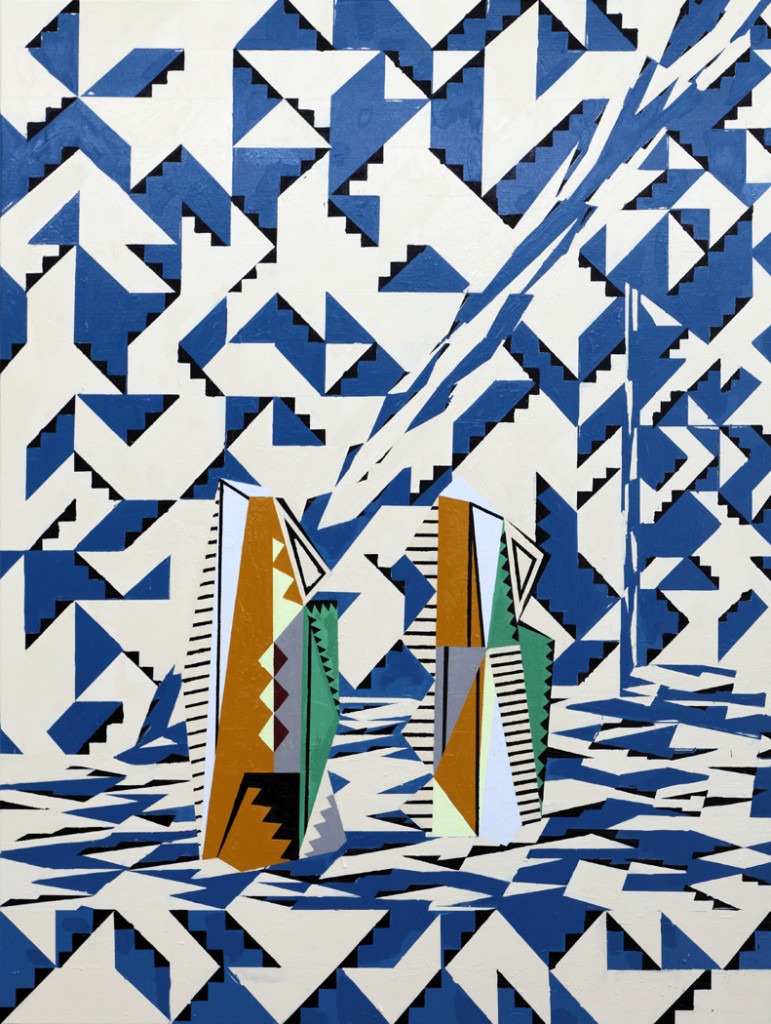 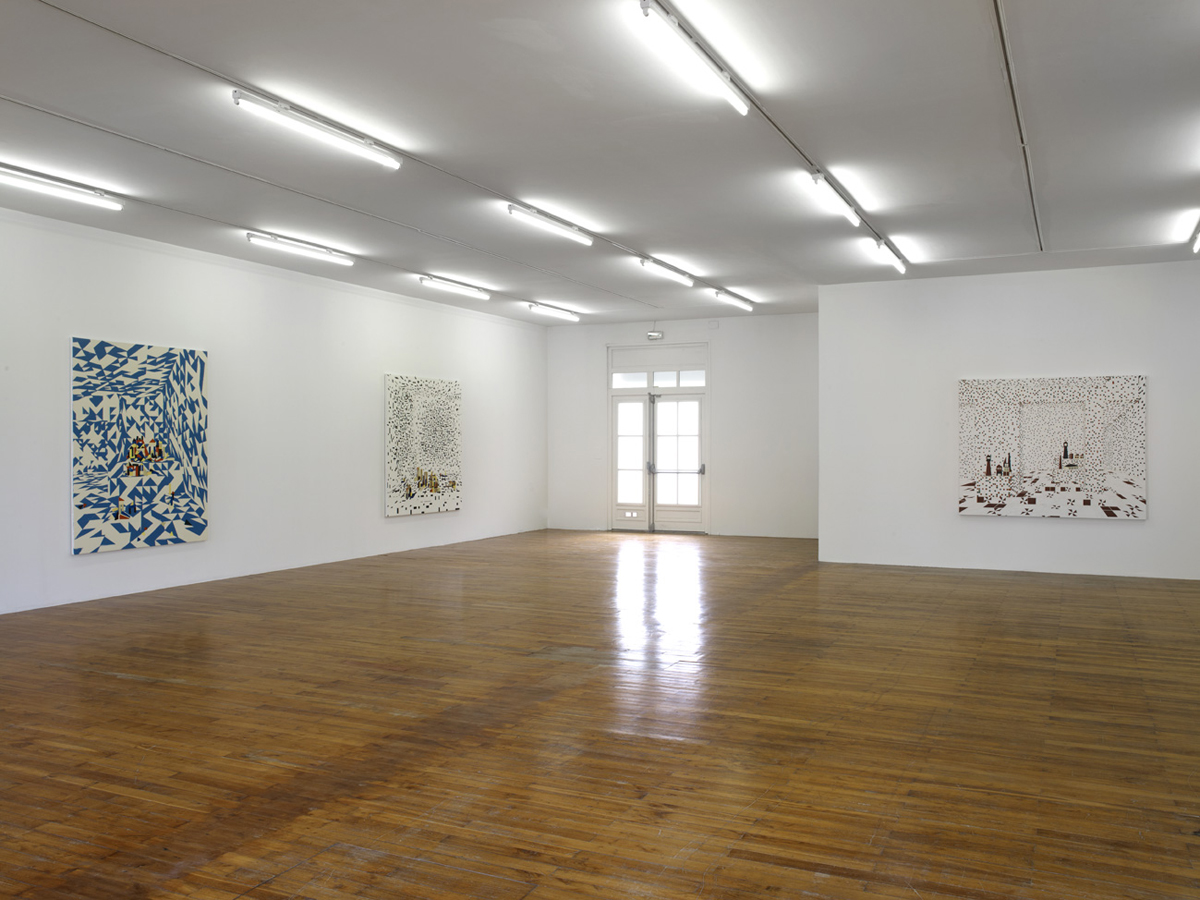 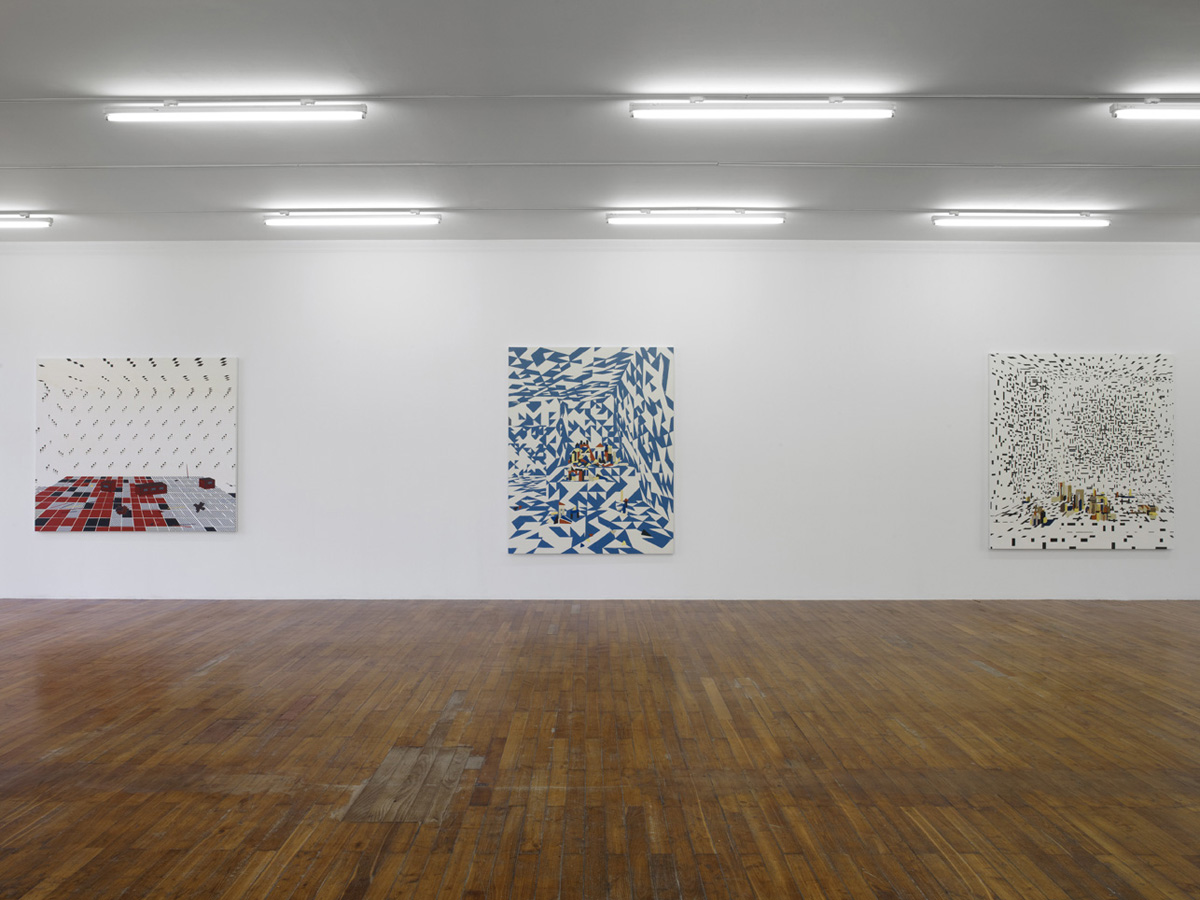 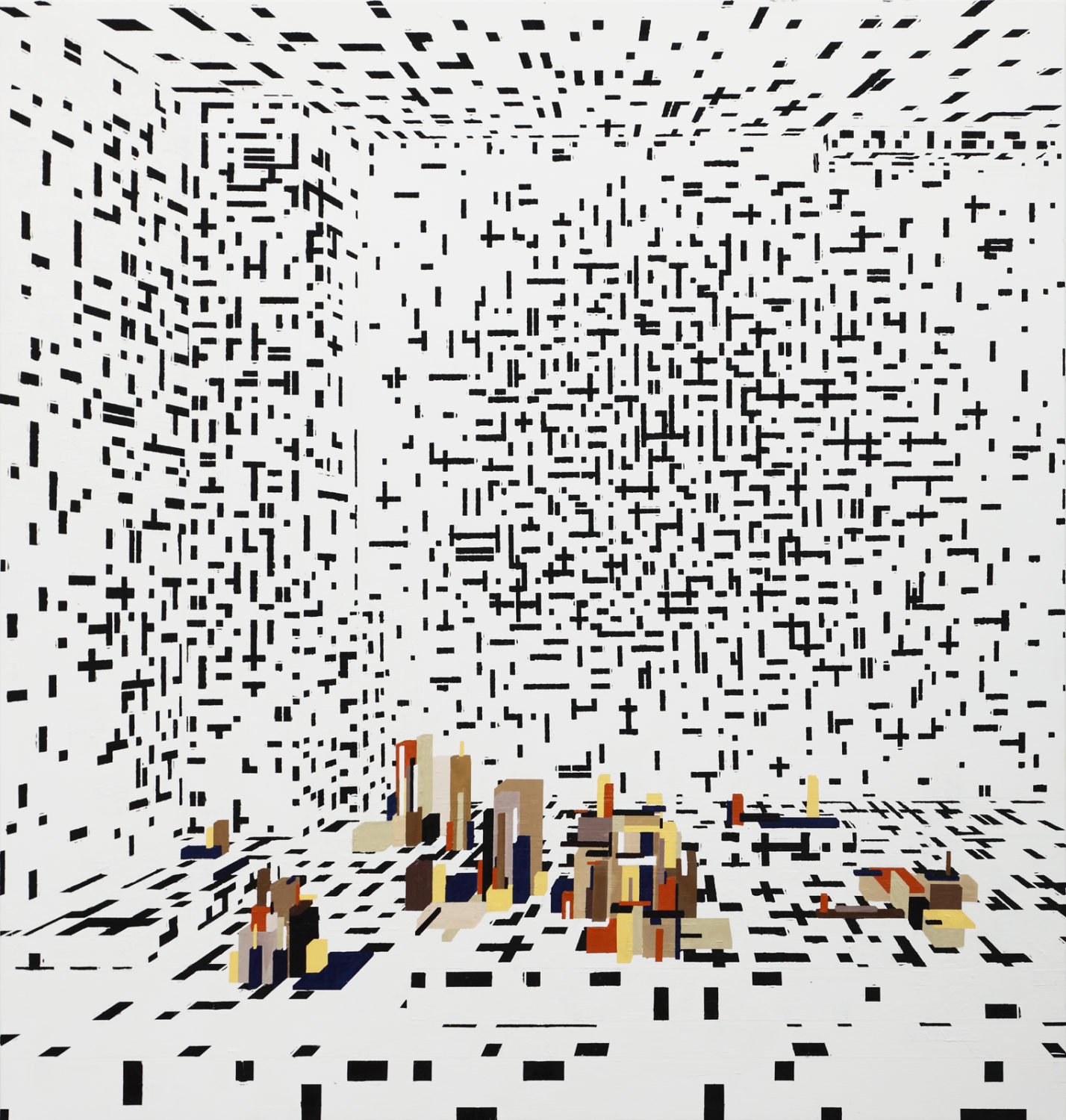 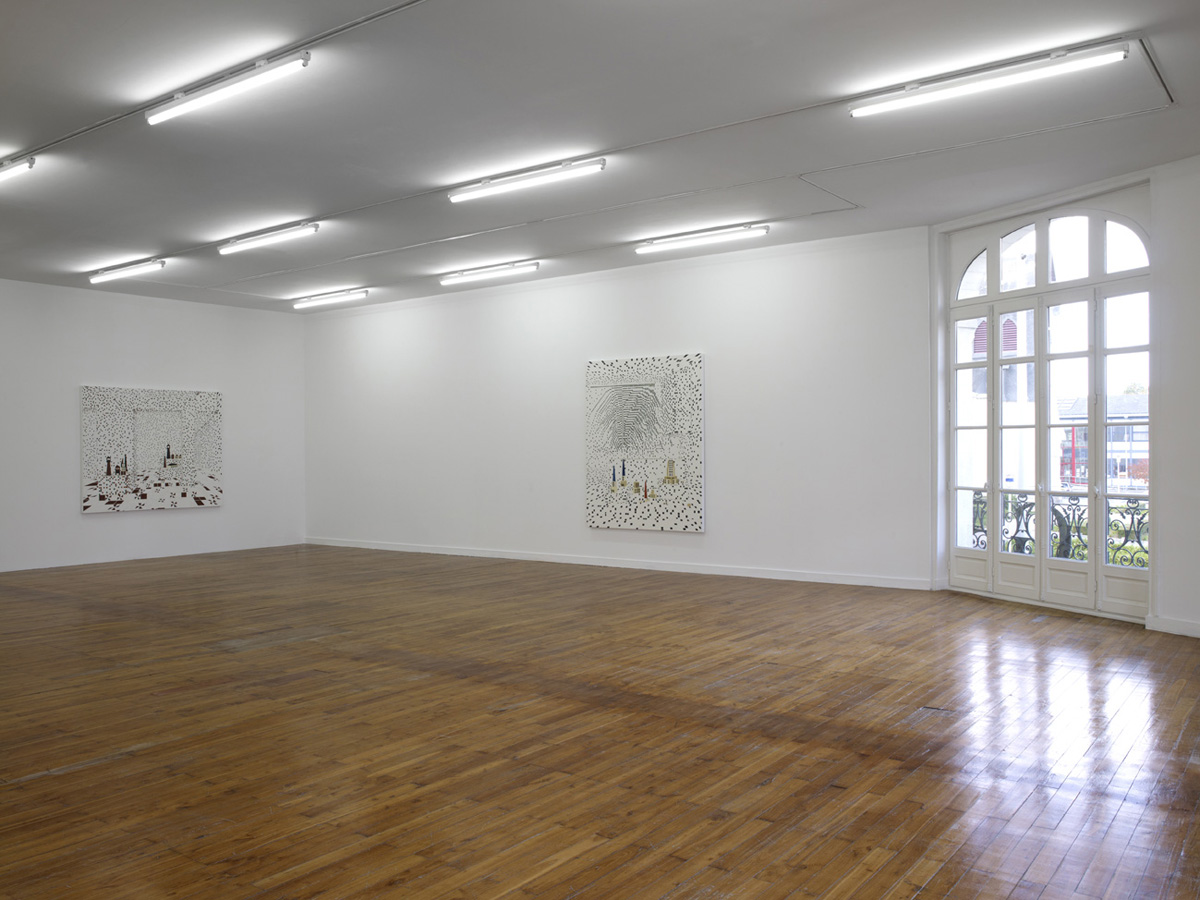 The floating syntheses of space-time in Farah Atassi’s works describe autonomous worlds with a uniquely fascinating power. Initially influenced by the aesthetics of ruins, the artist began painting a series of deserted interiors from photos of Russian community housing and abandoned, derelict sites. Her work is conceptual, and remarkable in the way it restructures space: large volumes are often approached at an angle and oscillate between hyper-construction and dripping paint, scale is disconcertingly distorted, and the relationship between form and presence is rethought through a beautifully considered meditation on furniture.

The artist progressively focused her investigations on the celebration of modernist utopias in figurative compositions treated as scenic devices: out of this came the Workshop series, which multiplies references, citations and a mise en abyme of signs. While the nods in the direction of Léger, Malevich, Mondrian or Charles & Ray Eames confirm her preoccupation with geometry, they also translate her persistent will to bring together architecture and painting in a plan and elevation process already present in Malevich’s Architectones.

In her most recent canvases, more complex and less narrative, she continues to consider space through an exploration of decorative motifs and architectural models. Her interest in the geometric motif (or the simple form) has led to a systematic use of the grid in the compositional process itself (Modern Toys II, Space for Objects), and then to a progressive opening up of the work to the question of ornamentation.

These new formal approaches are evident in the Tabou series, inspired by the aesthetic of Fritz Lang’s Nibelungen and confronting modernism – the pure line of the Bauhaus – with folk ornament. The artist seems to want to orchestrate coherence out of contradiction: false symmetry, misleading mirror effects, a decentred vanishing point. Her recent canvases set up a presentation made up of fault lines, melding rigour and controlled accidents, a mental scene conceived for hybrid objects, dwarf factories, miniature apartment blocks or piles of toy houses.

In the lineage of artist precursors who introduced elements of applied arts, craft and folk art into modern art (Auguste Herbin, Marsden Hartlay, but also Matisse, who she has much studied) Farah Atassi also deploys some surprising motifs inspired by the East. Reproduced in a systematic manner on the entire surface of the canvas, without a central point, these forms sculpt, fold and unfold spaces like mysterious theatres of objects, between abstraction and figuration, flatness and marked illusionistic perspective (Theatre Objects, Sculptures in Maze).

The exhibition presented by Le Grand Café will give particular prominence to these most recent investigations, offering a comprehensive journey through the artist’s universe with a dozen canvases: a dozen cerebral micro-universes.

Farah Atassi is calling into question stories of modernity in painting, its formal stakes and its relationship to reality and to fiction; in so doing, she is taking part in current art debate, confronted with the challenge to interpretations posed since the West discovered the existence of other realities and other modernities. At a time of post-colonial approaches, the artist’s activity nevertheless holds on to more formal and age-old concerns, with a particular treatment that rests on contrary associations: interiors and perspective, all-over and motif, cubism and ornament. A remarkable way of producing hybridity in the service of utopian spaces, with shades of the metaphysical.

Born in 1981, Brussels.
Lives and Works in Paris.
The artist is represented by the Xippas gallery (Paris).