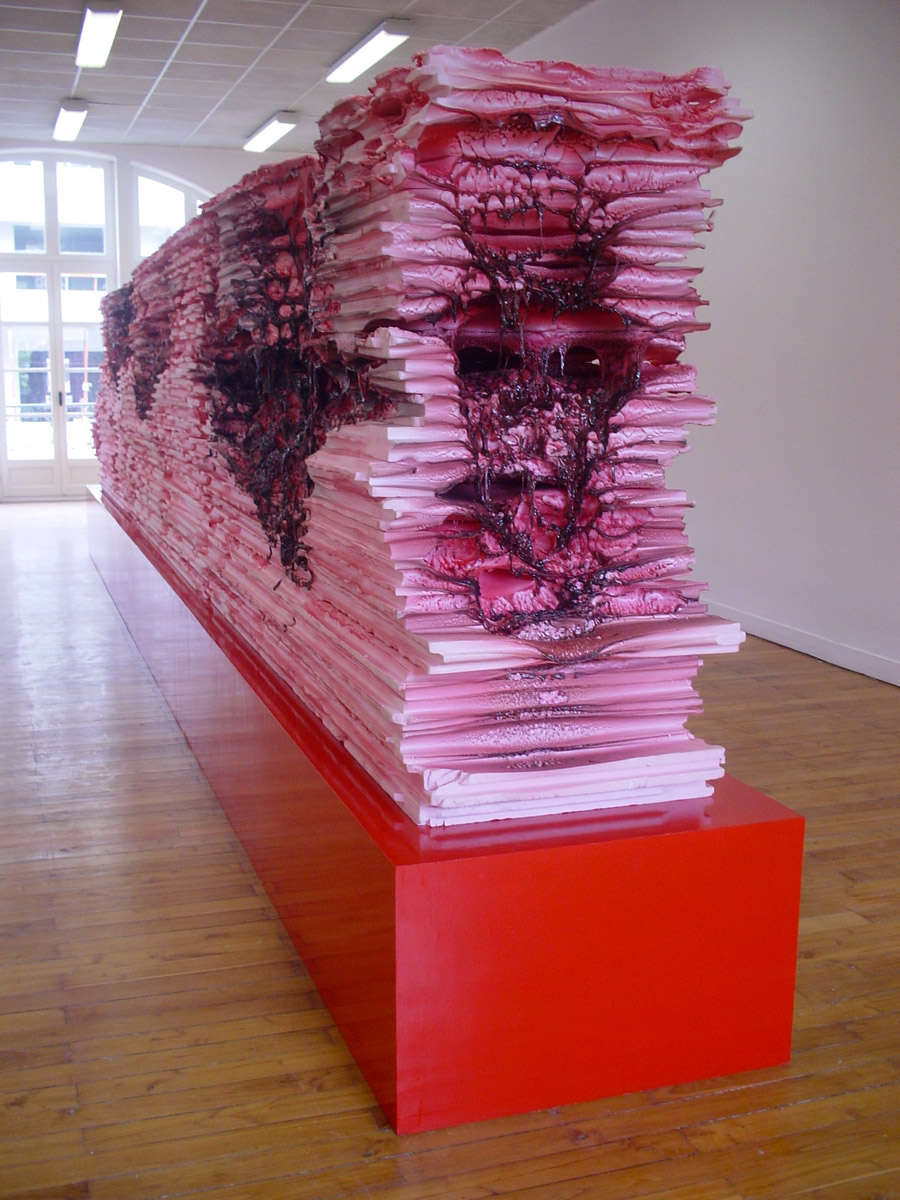 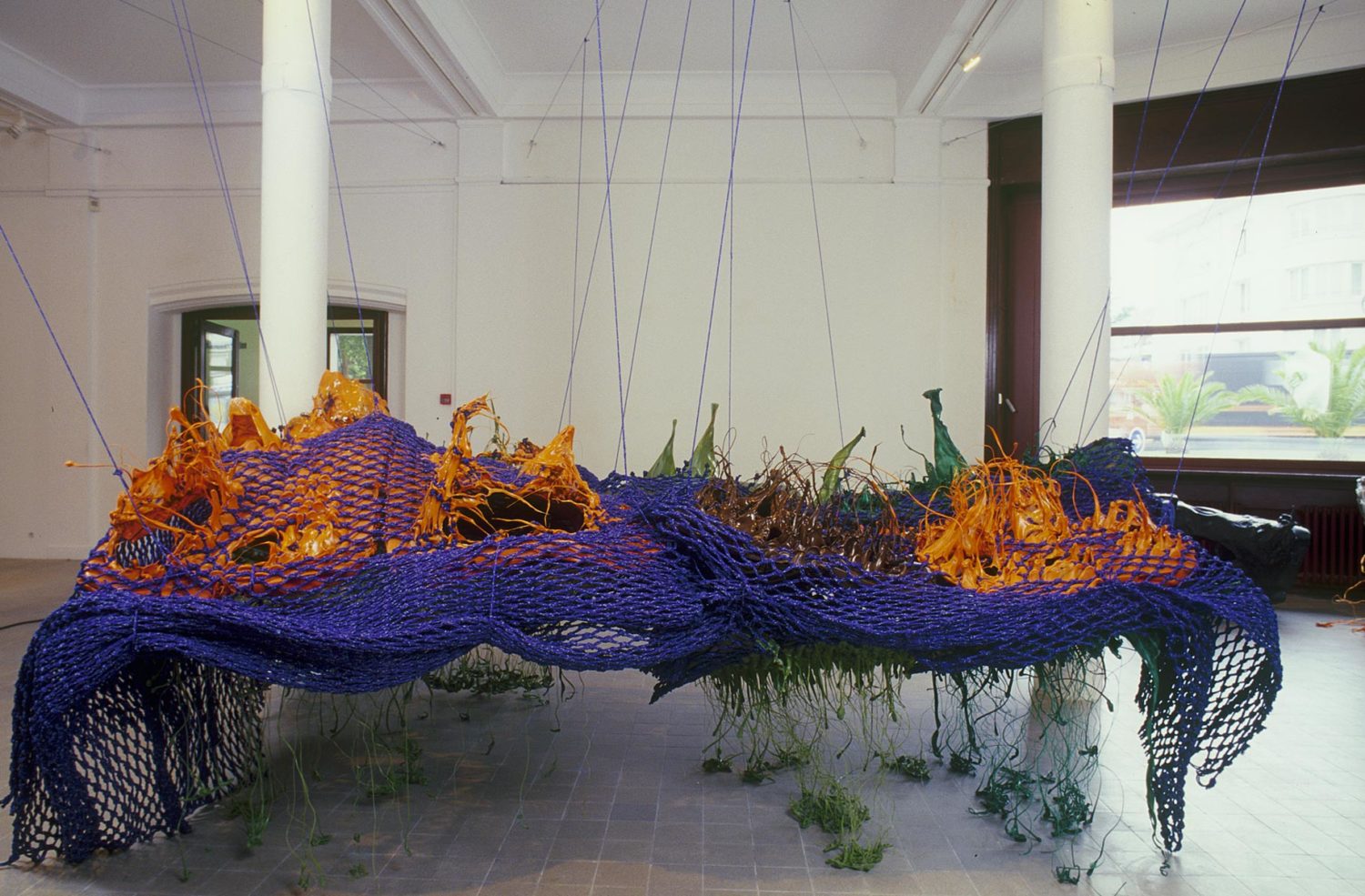 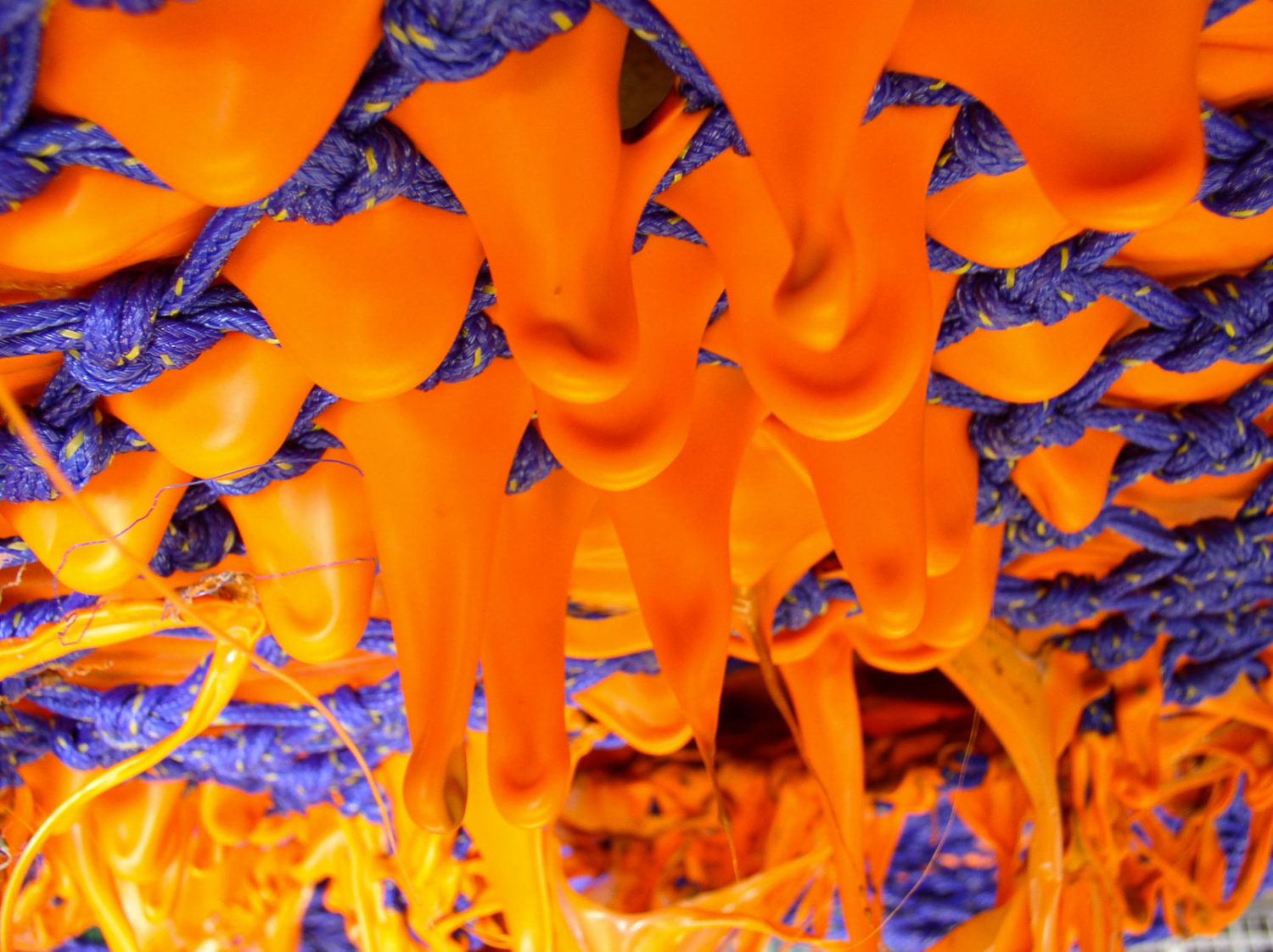 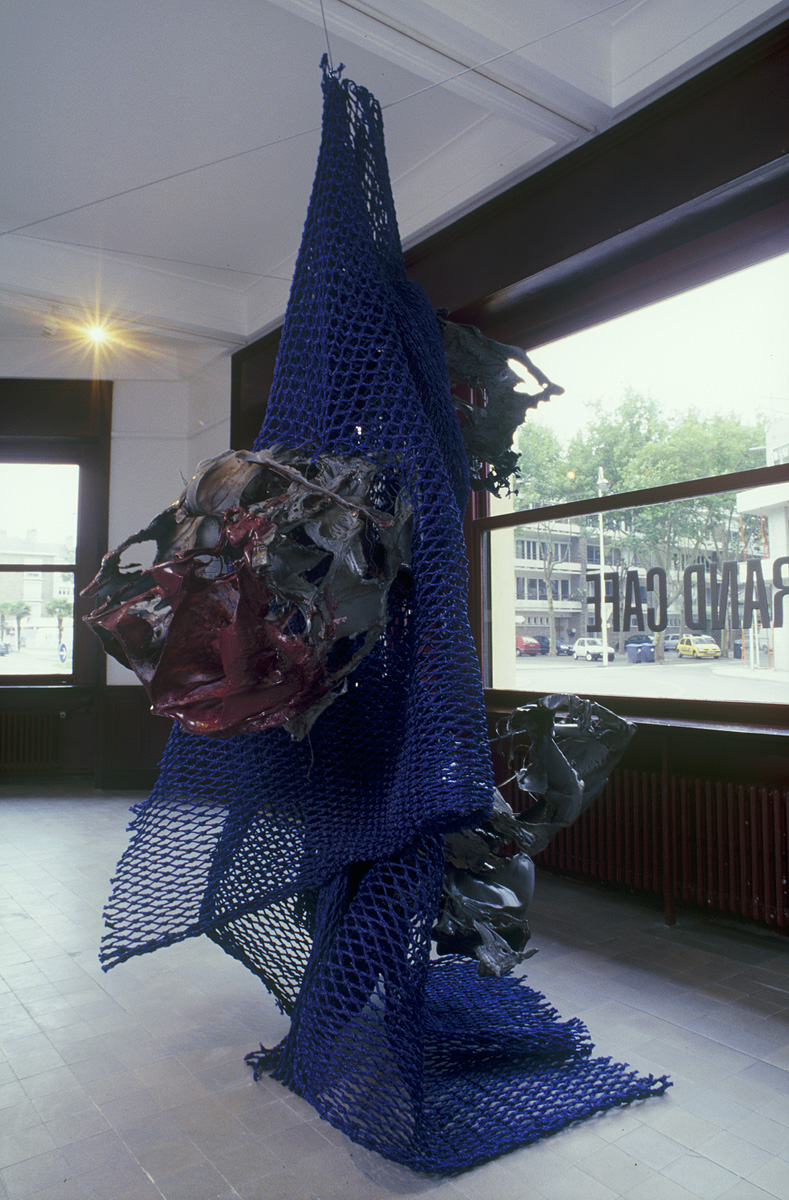 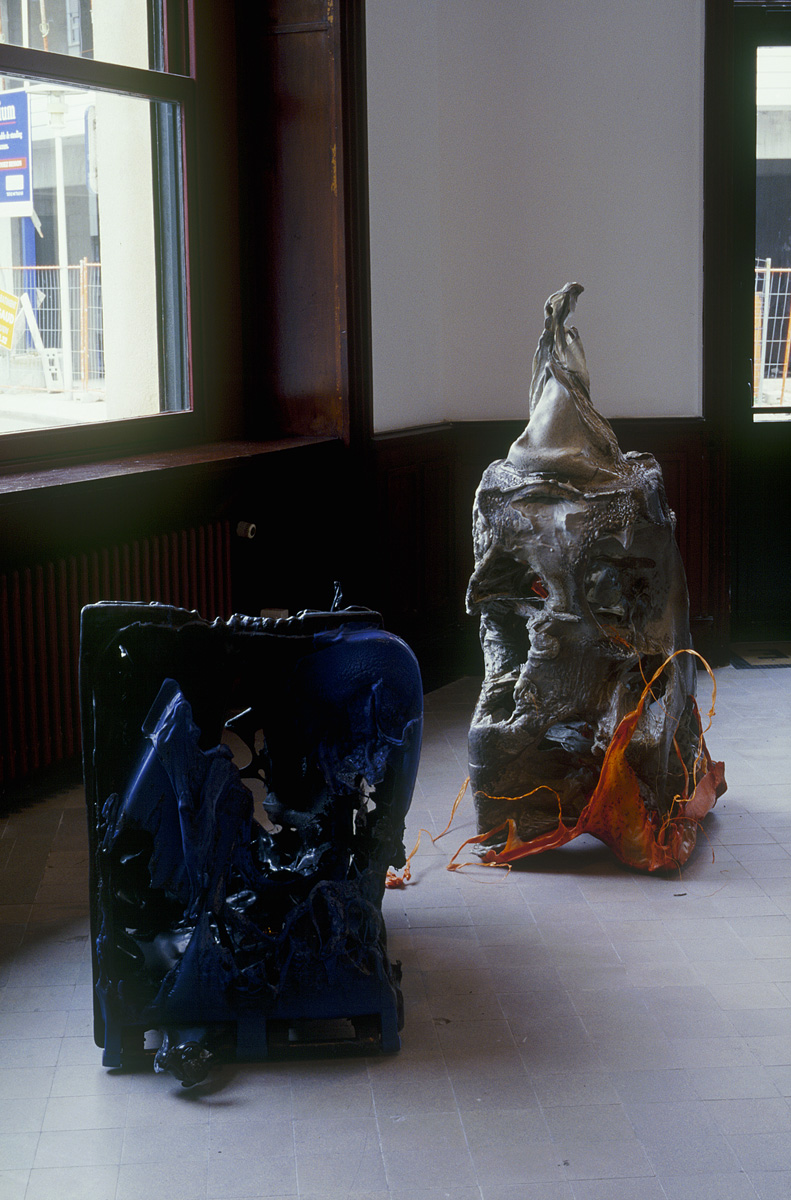 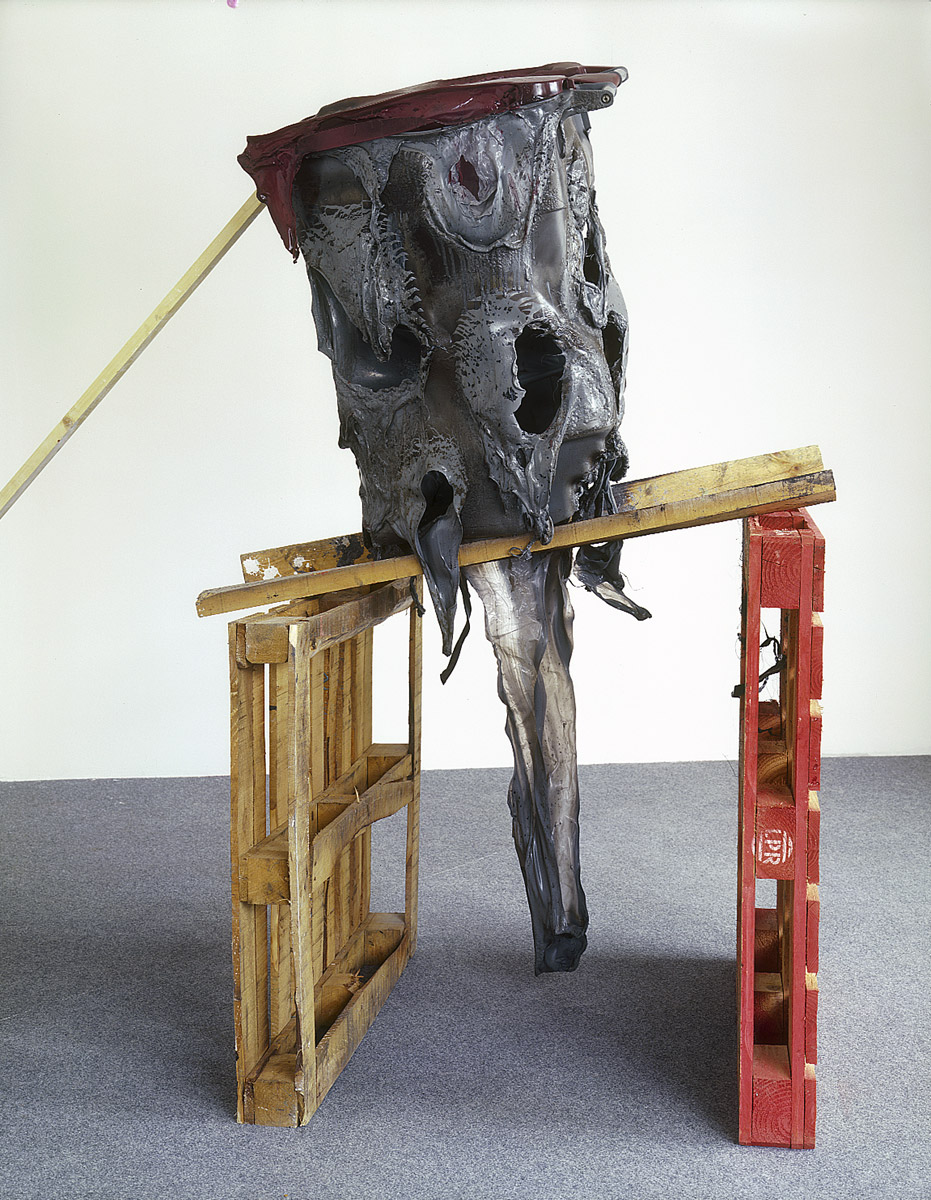 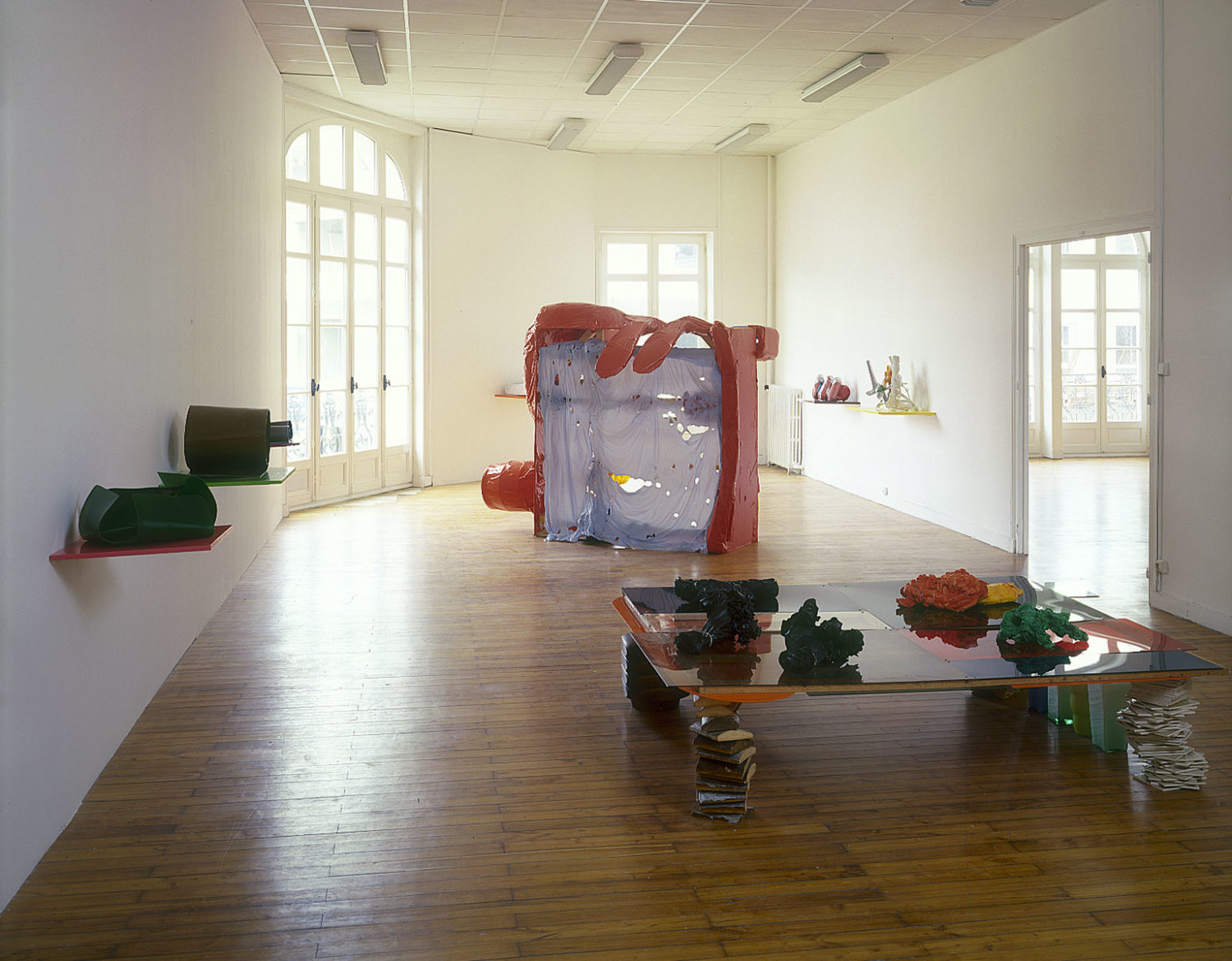 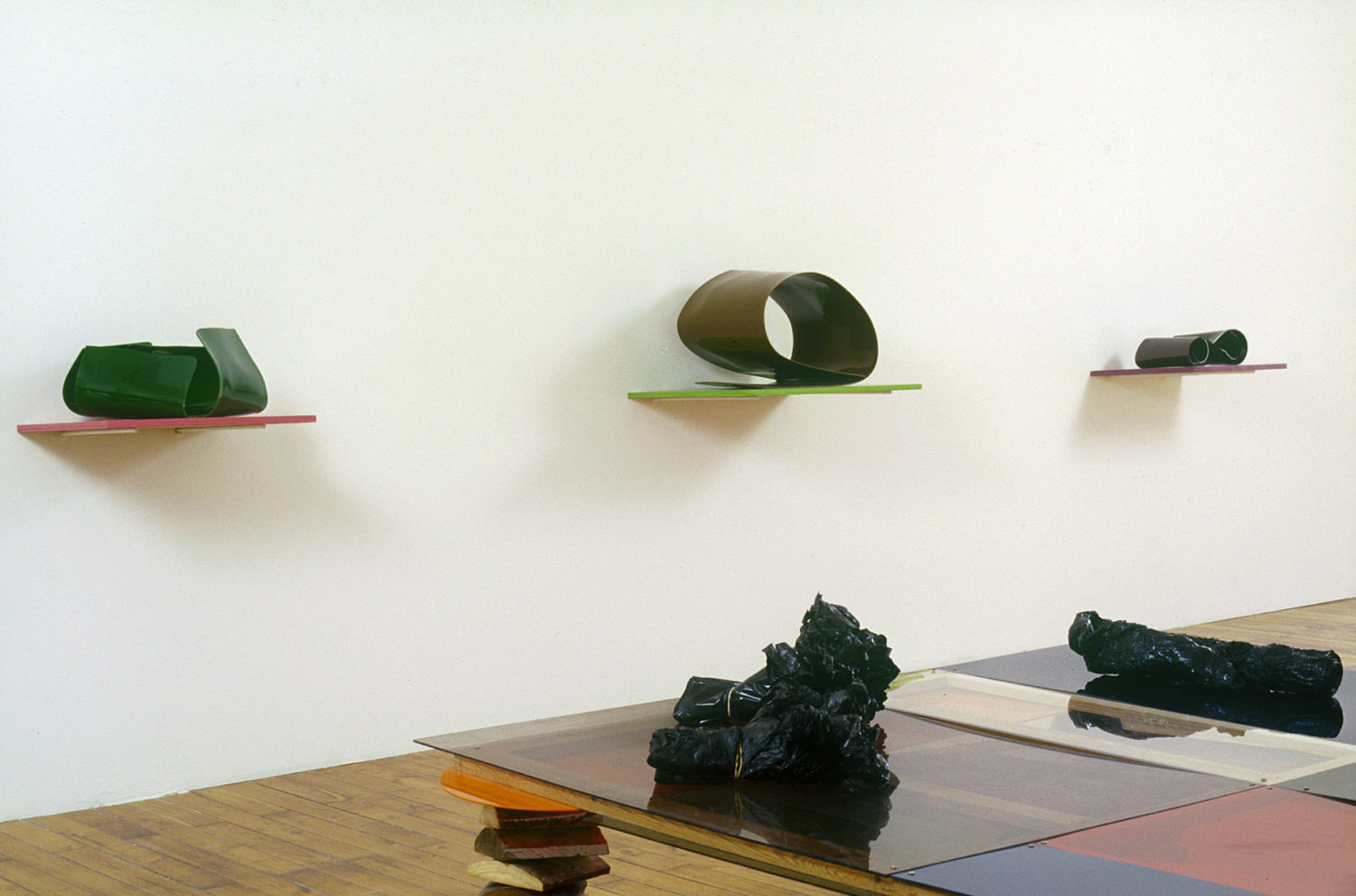 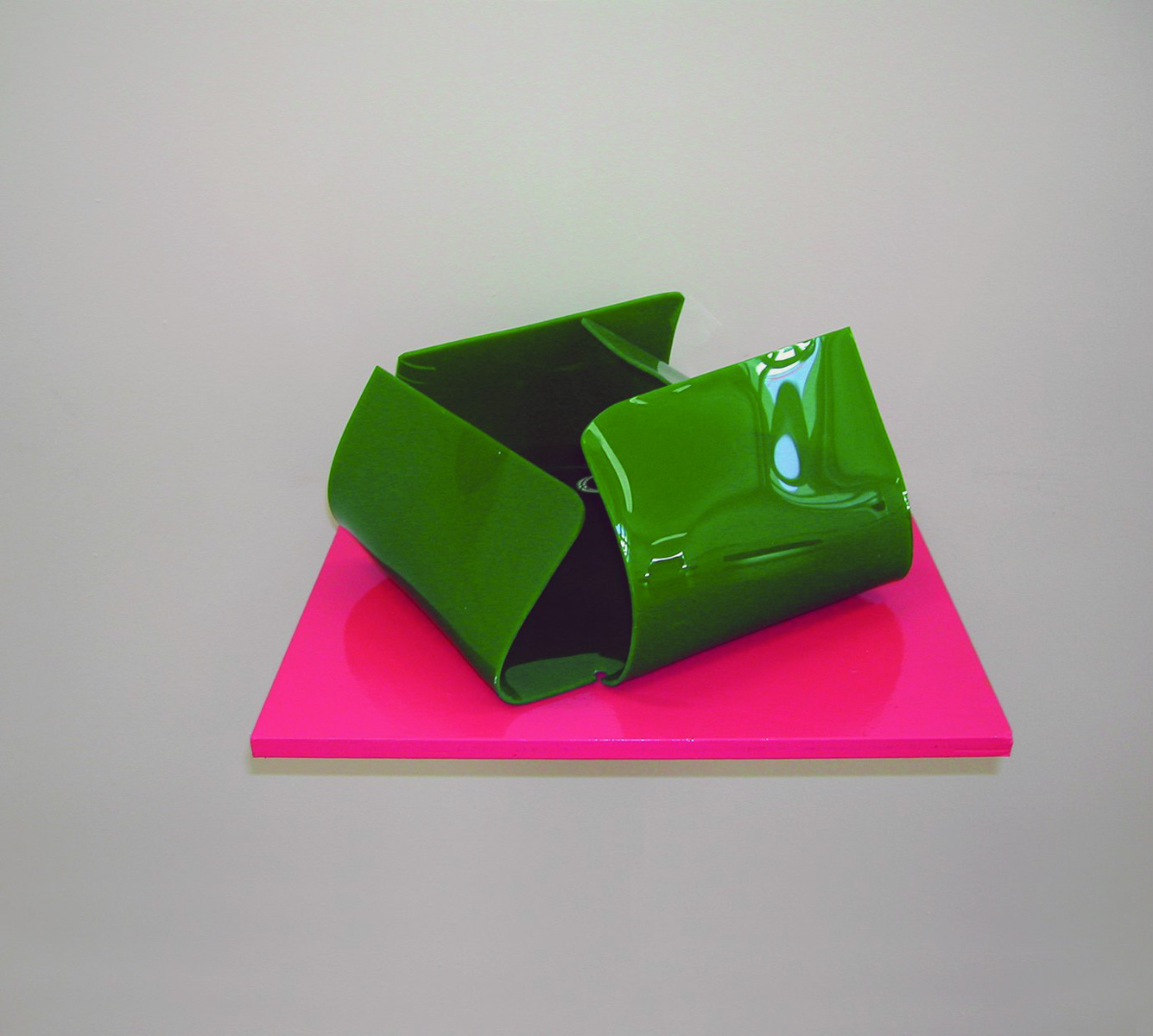 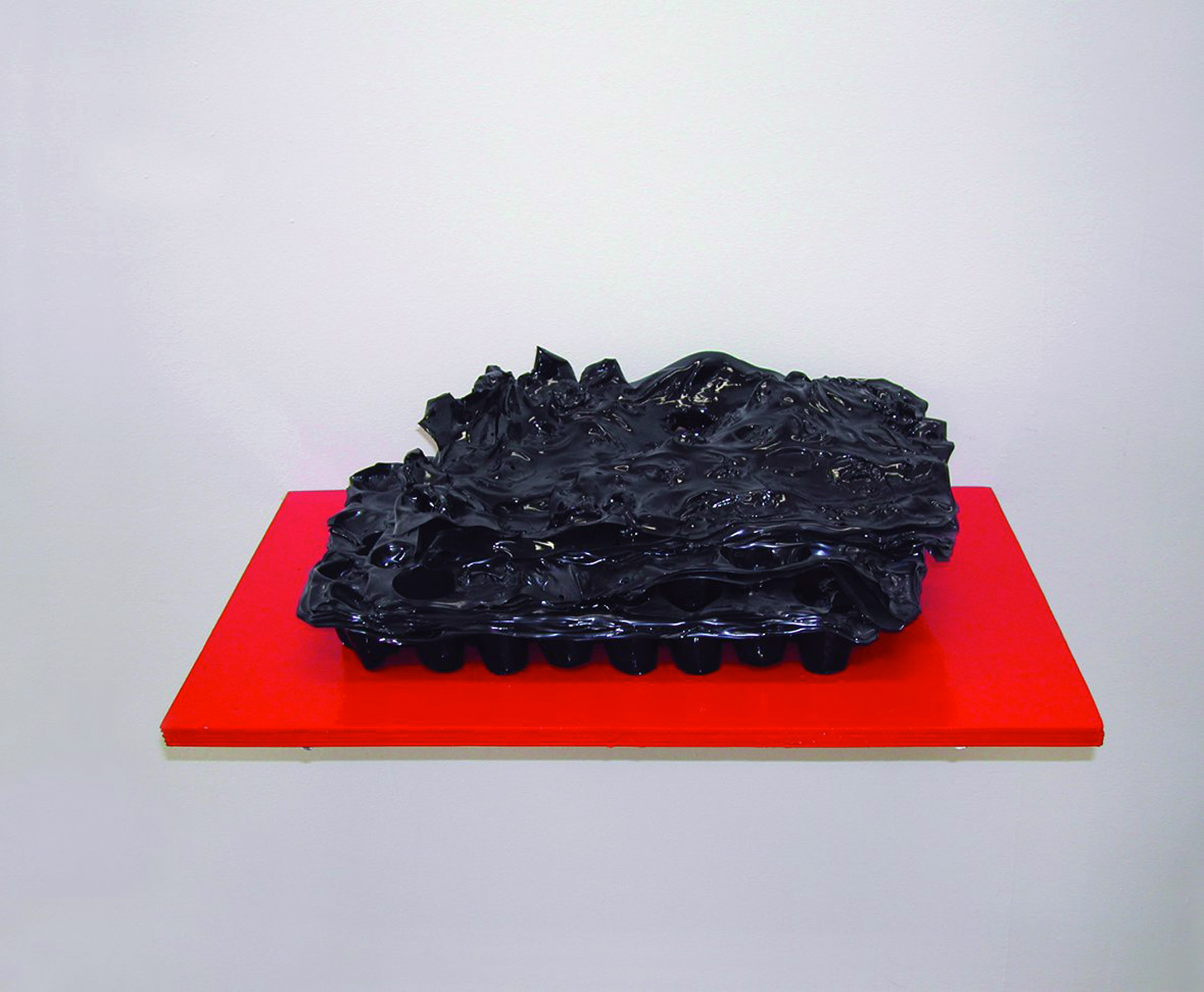 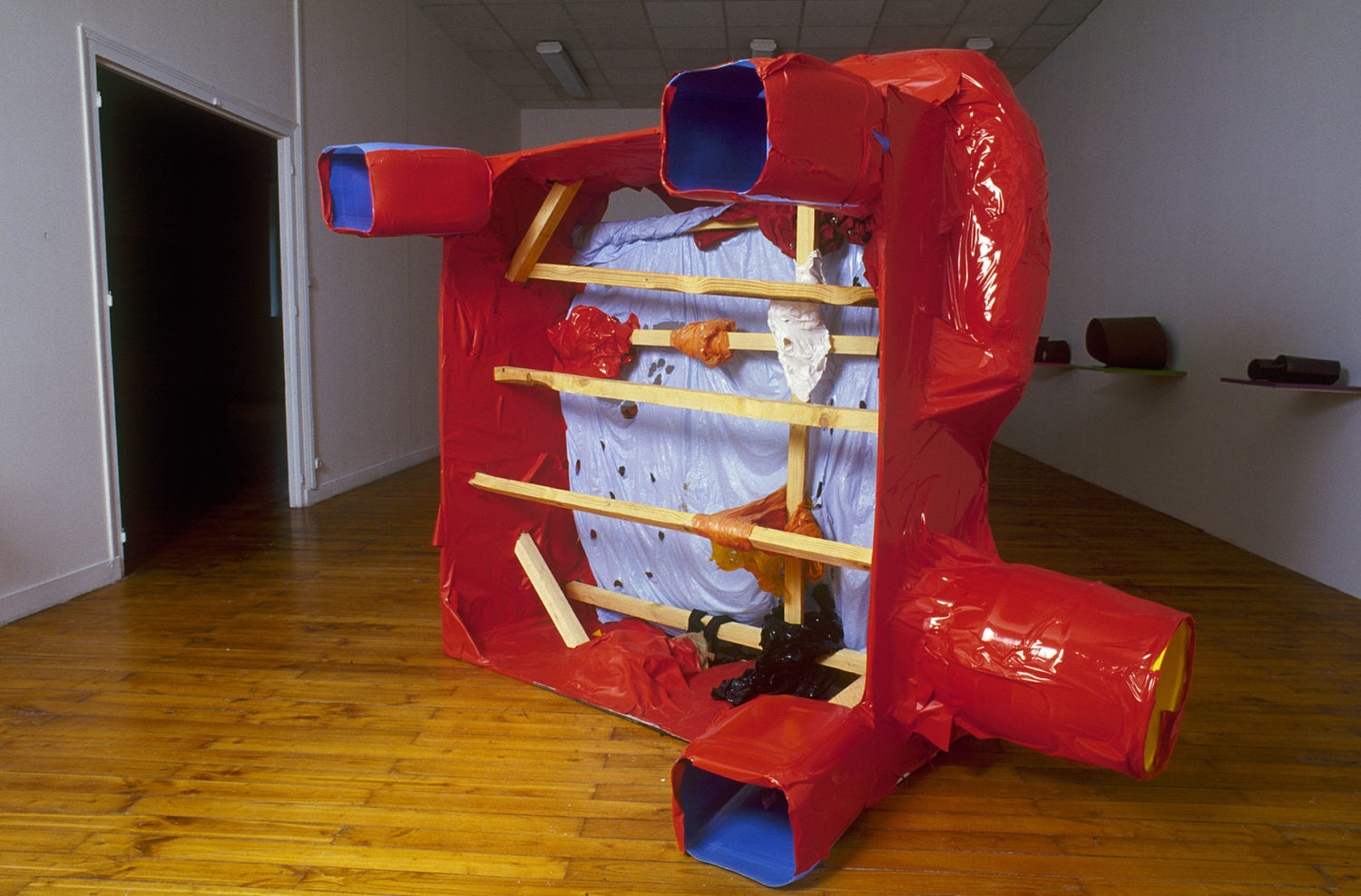 For almost twenty years, Anita Molinero has explored the questions of sculpture: full and empty, weight and mass, volume, the plinth, the gestures of the artist in the studio … Enfant terrible of Art Informel and Pop Art, Anita Molinero has traced a particular personal path that places her in the family of artists that produce an ‘impoverished’ art, ‘without nobility’. “Her sculptures on a knife edge manifest a fragile equilibrium which has nothing to do with gravity, but show, rather, a research into what, minimally and with the means to hand, ‘makes’ sculpture”. This is why the materials and the objects that she uses are ordinary: cardboard, clothes, carpet, plastic, vinyl film, polystyrene…

As proliferating, exuberant and tormented now as ever, Anita Molinero’s work is filled with funny, violent, inventive energy and has no other aim than to celebrate the infinite liberty of form and the enigma of matter, to exult with and through sculpture. The exhibition at Le Grand Café will show recent works, two monumental examples of which have been created for the occasion. Most of them, following on from the works she has been imagining over the last few years, are made from objects or materials that have been reworked by fire.

In the main space of Le Grand Café, Anita Molinero is showing a monumental sculpture suspended from the ceiling and made up of fishing nets through which ooze melted plastic refuse bins. Some kind of stalactites from the industrial world, they plunge whoever looks at them into a universe that is both strange, comparable to that of science fiction films (and their special effects), and sometimes anthropomorphic, the reference to the animal and vegetable kingdoms being so present in these forms randomly born out of the action of fire on matter.

Often in Anita Molinero’s work sculpture appears as a gendered activity, one that cannot be otherwise. In contrast to masculine sculptors of her generation, she does not reject affect and sentiment in her sculpture. Her use of everyday, sometimes recuperated, materials does not aim at a denunciation of the consequences of our consumer society. She simply seeks to give them a new aesthetic presence. From this fact, the question of recycling does not therefore appear at the level of the material, but in the work of sculpture itself as language. A sculpture can, in effect, have ingested another, but only partially, and have rejected the other part of it. All without ever going in the direction of variations or repetitions. Anita Molinero has also made a ten metre long sculpture in pink polystyrene sheets. Like a giant, abnormally stretched, mille-feuille pastry, it displays the fire events, on the one side very trashy and on the other more gentle and elegant (the sculptures have many registers …). Monstrous and sweet. The exhibition also shows a group of works, notably the ‘yurts’: black and made from partially melted foam, bin liners, and parasols.

Born in 1953 in Floirac (France).
Lives and works in Marseille.
The artist is represented by Galerie Thomas Bernard Cortex Athletico.