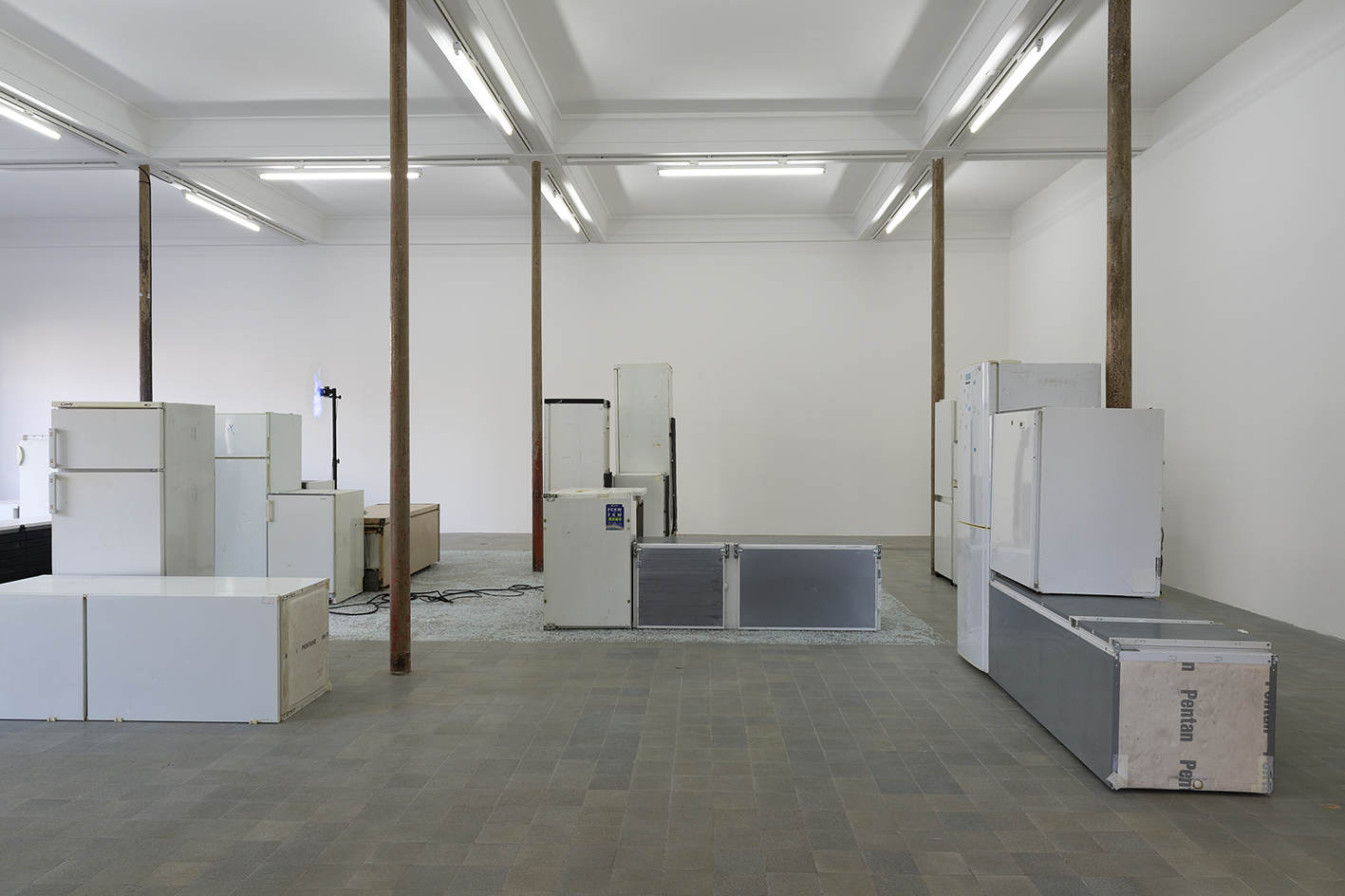 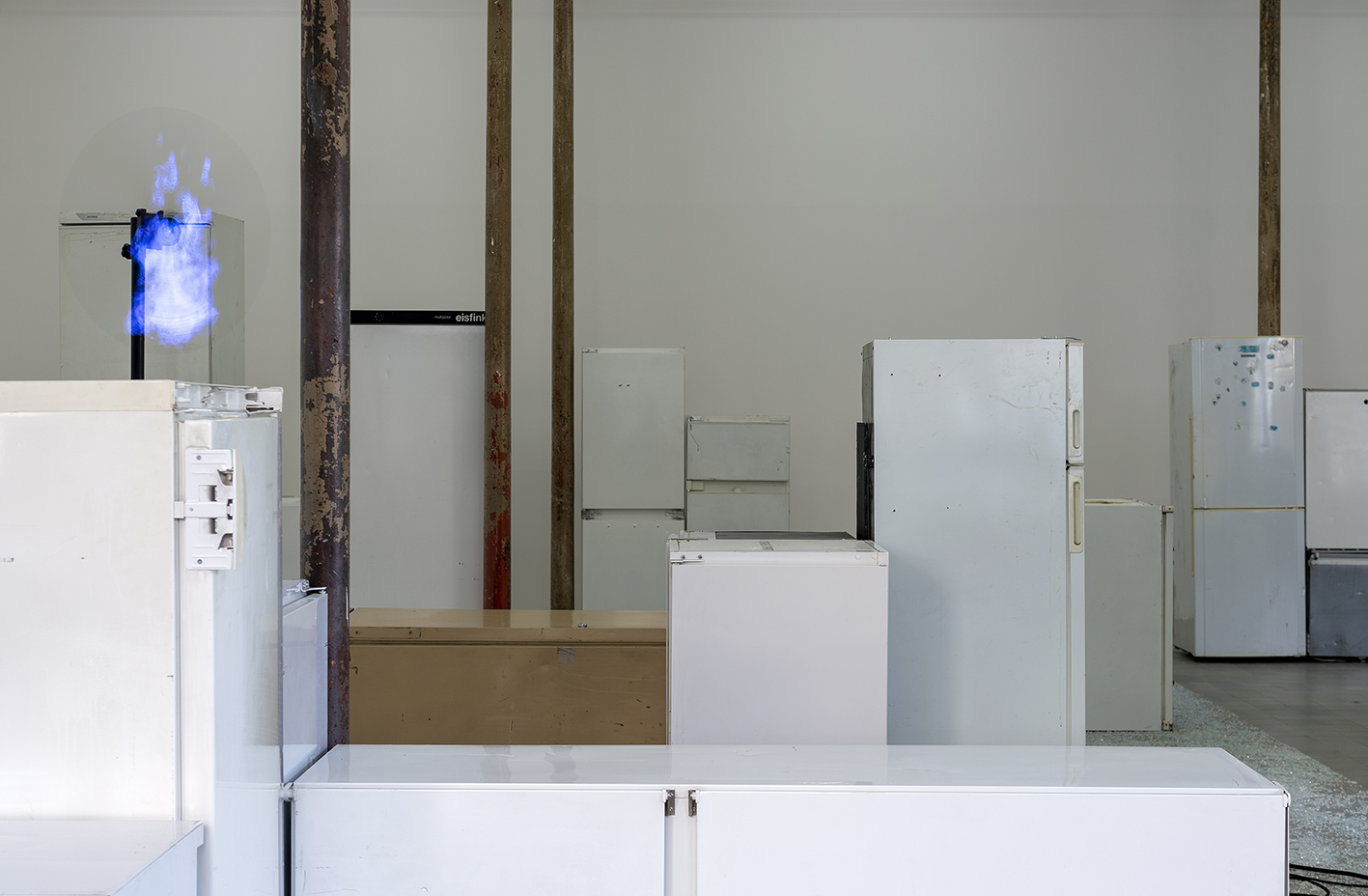 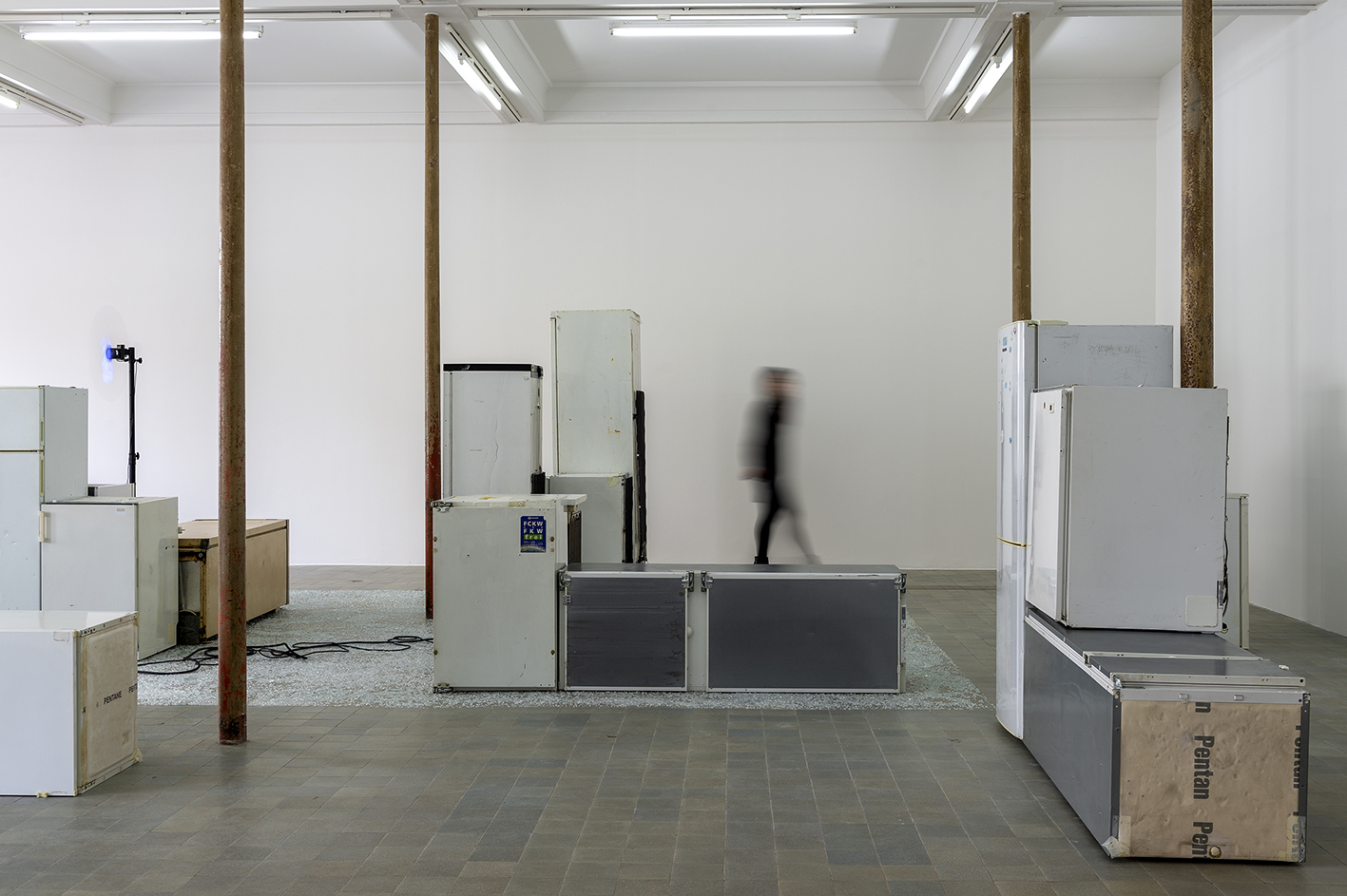 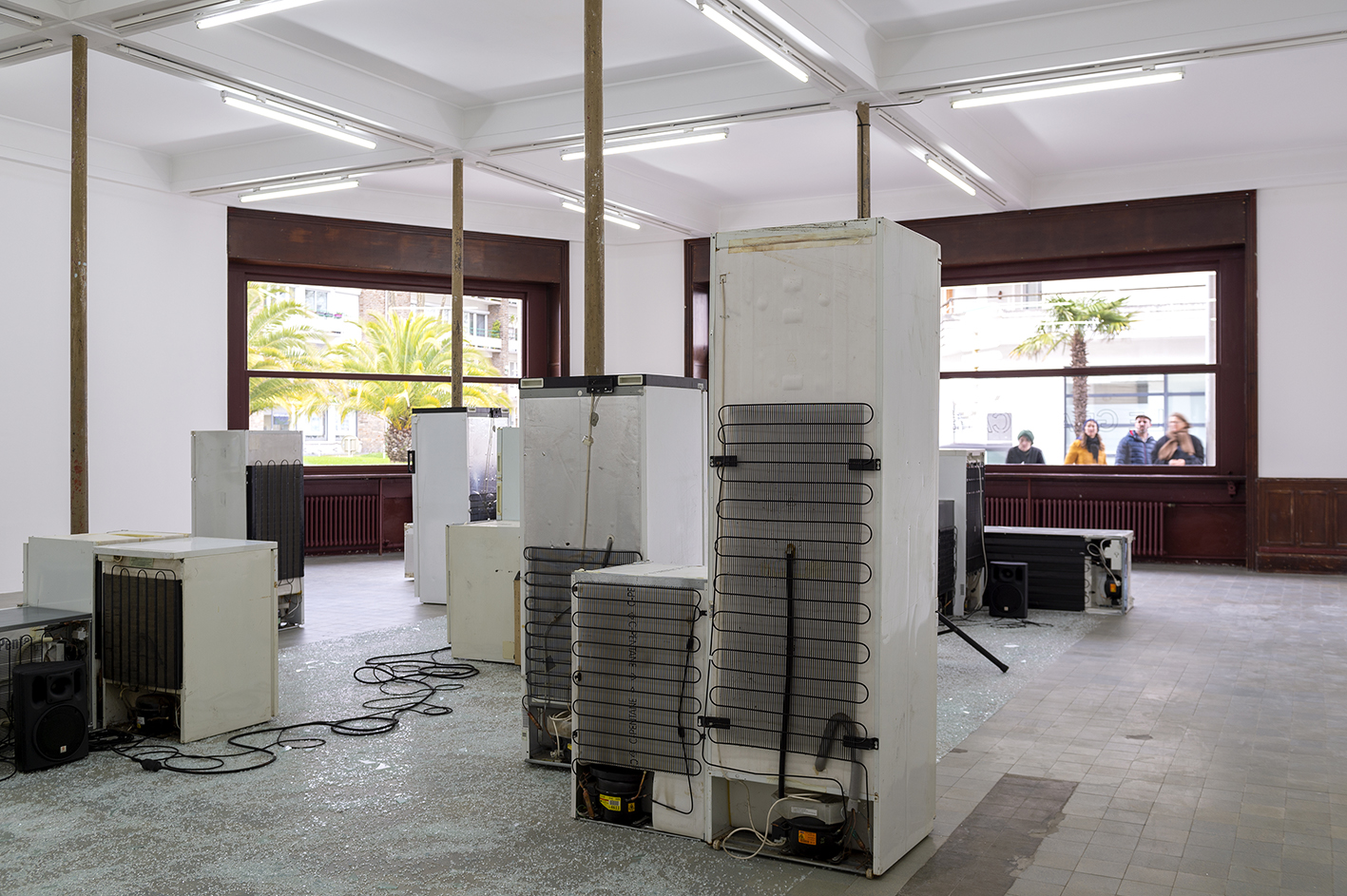 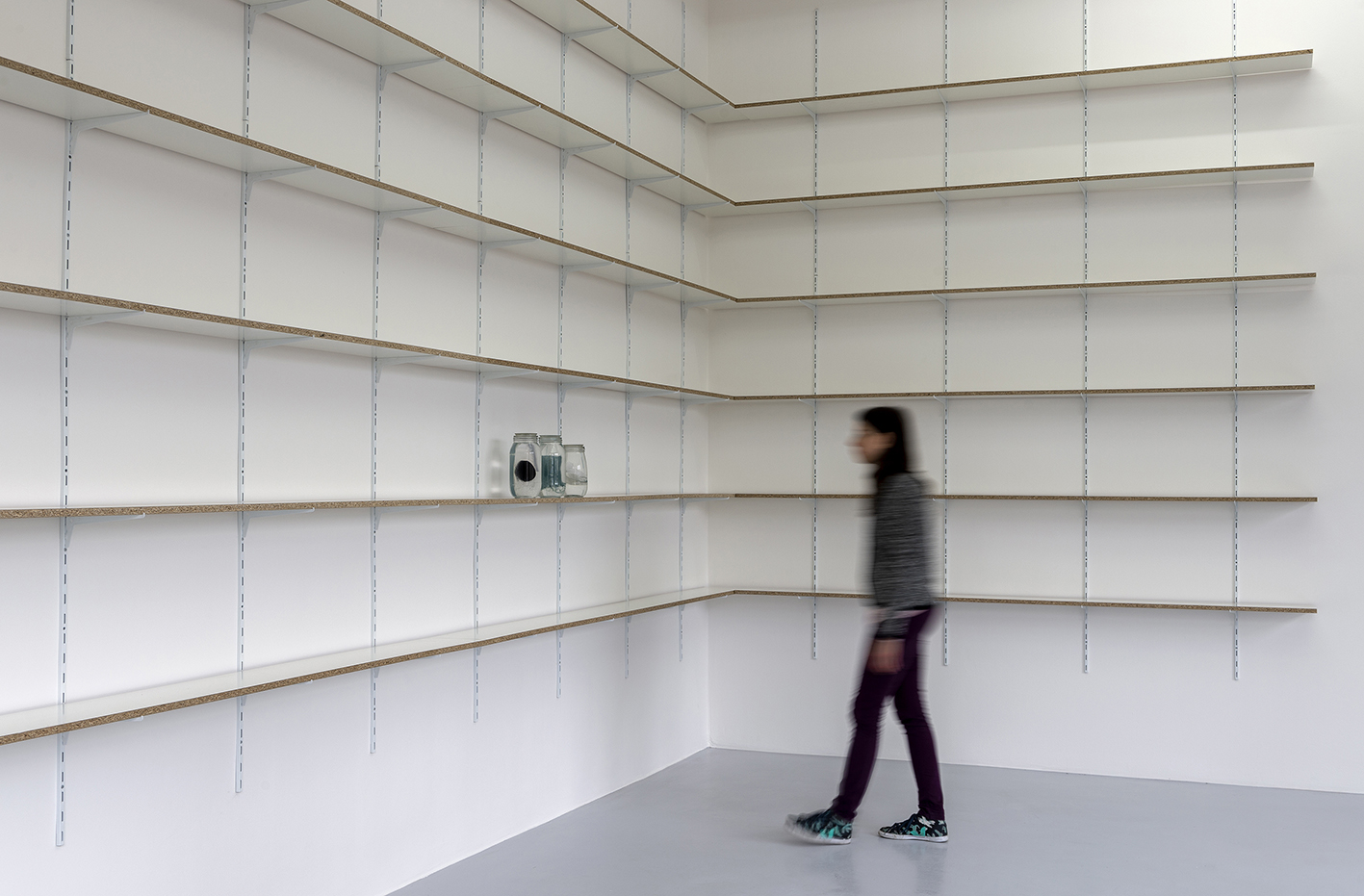 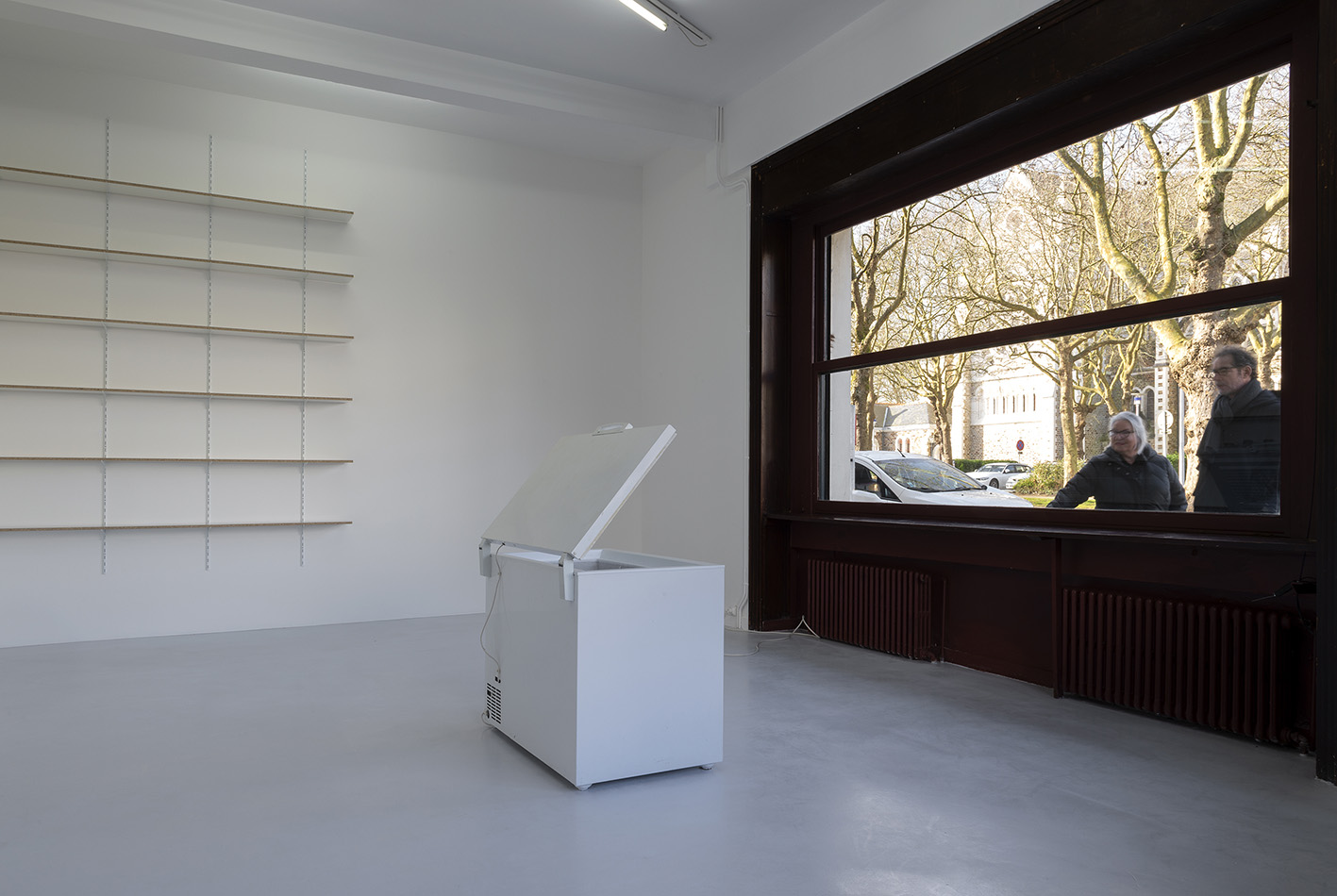 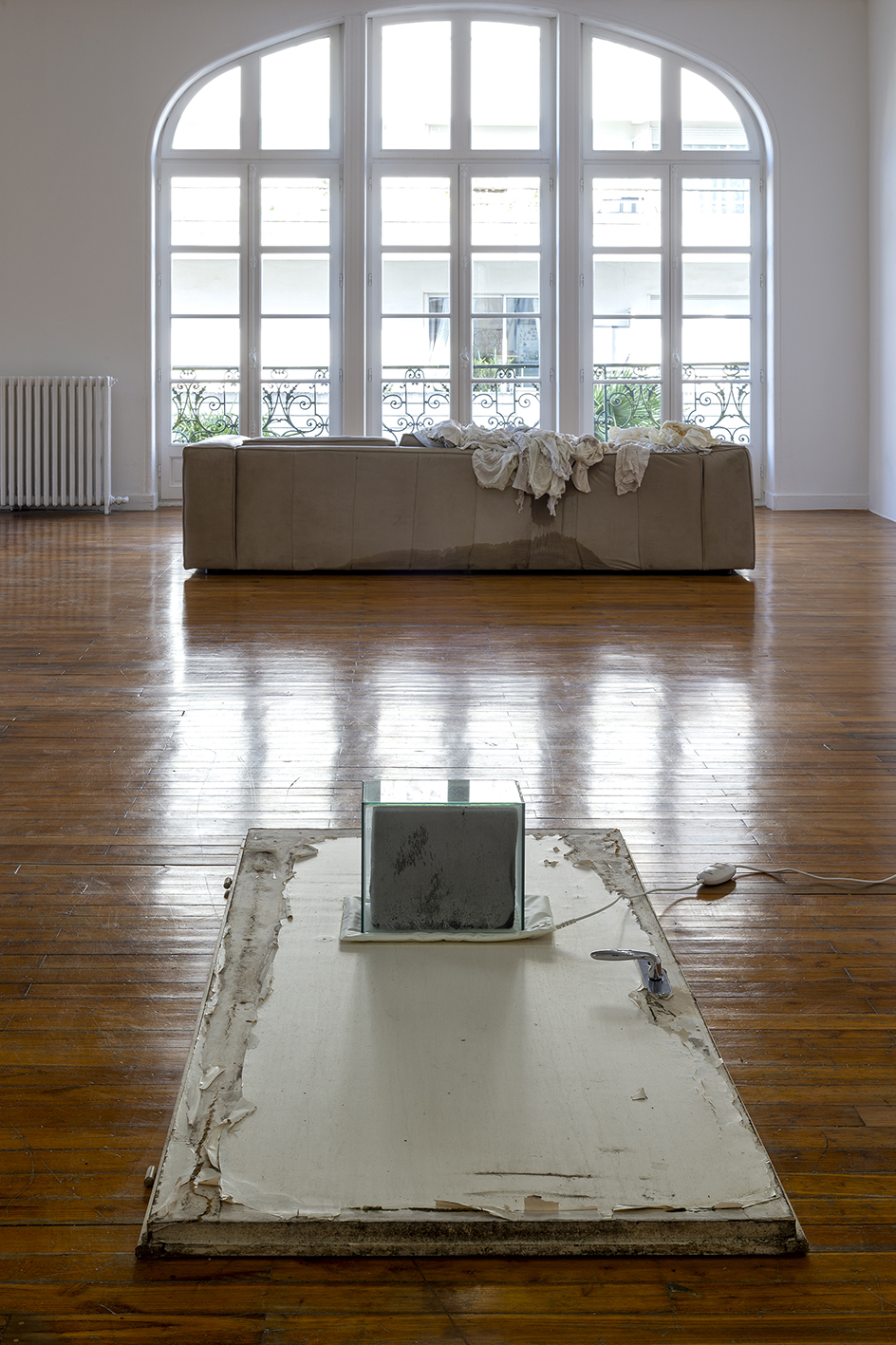 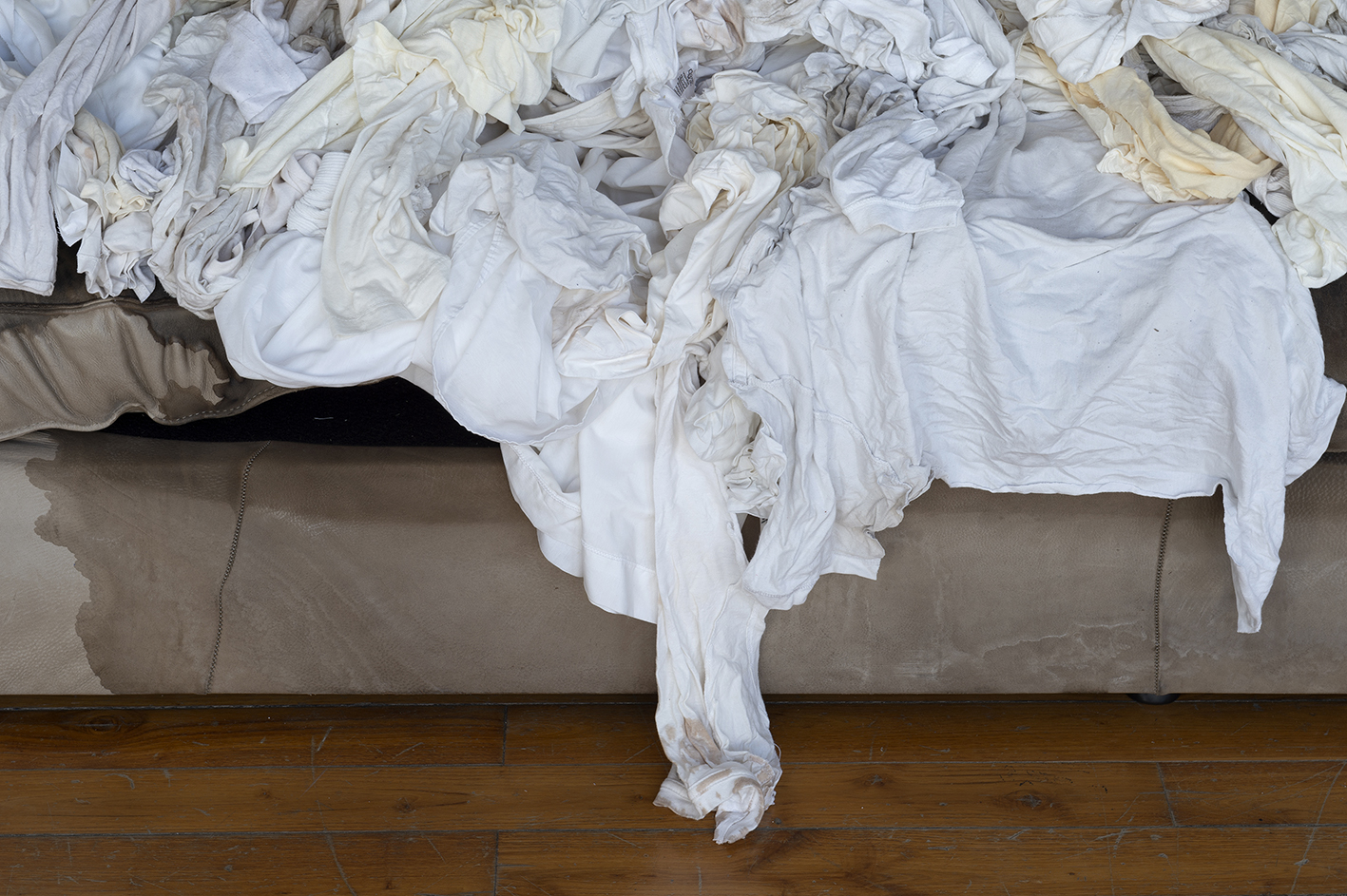 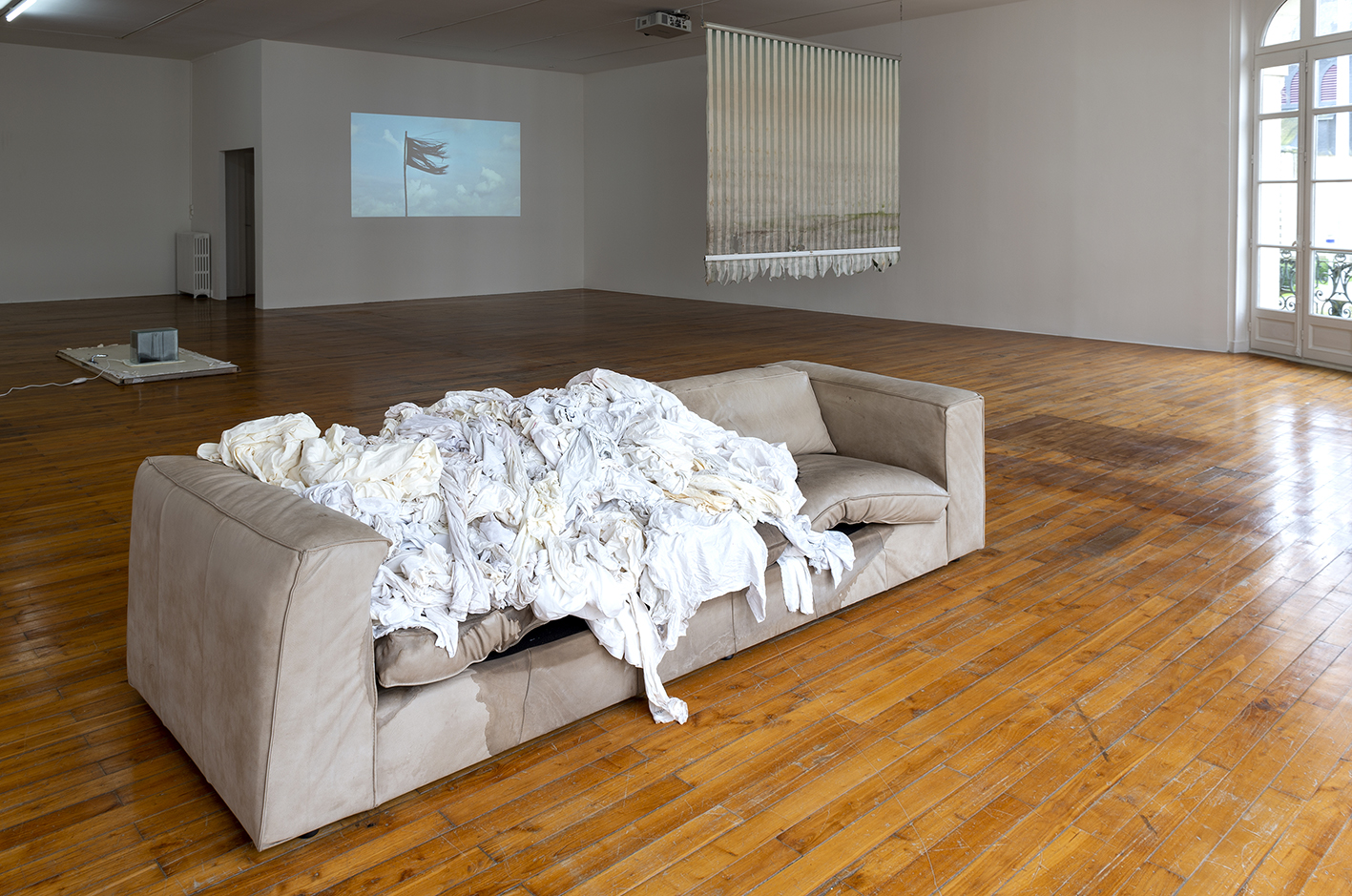 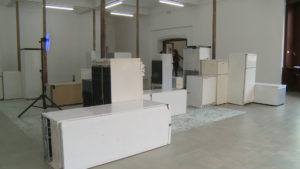 Edith Dekyndt is an internationally renowned Belgian artist who has exhibited in a number of major institutions, and her works can be found in several public collections. She lives and works between Brussels and Berlin.

Her pieces take many forms: projections, installations, or performances. They are more than meditations on representation; they evoke the invisible energies at work in the matter that makes up the world.

Edith Dekyndt takes everyday objects as a starting point, following her intuitions to capture the moments of life that her rudimentary and delicate experiments bring to light.
Her empirical approach to art uses gestures or actions on materials to embrace uncertainty. By relinquishing control in an orchestrated manner almost imperceptible forms appear, and processes such as fermentation, reduction, capillarity or accumulation allow the artist to make the intrinsic underlying processes tangible and visible. In this way, natural forces and phenomena (cloud iridescence, air flows, molecules, etc.) are offered up for contemplation and reflection; each of her works reveals forms of life in an unstable and impermanent state.

This approach, which might seem altogether banal and anodyne, turns out to be utterly fascinating. It creates an opening onto a point of equilibrium, somewhere between dream and reality, that invites the observer – the ‘perceiver’ in Edith Dekyndt’s words – to plunge into a timeless, intimate experience and become conscious of the shortcomings of their visual perception as they watch minuscule details become captivating, ephemeral and fragile.

More generally, Edith Dekyndt sets about scrambling the reference points. As Vincianne Despret indicates in one of the catalogues dedicated to the artist’s work, we would no longer know where the ‘subject’ of these experiences is (the thing? the body? the artist? the perceiver?). Her experiments with possibilities are ways to ‘augment our capacity to be open to the world in another way’.
Like the American political theorist and philosopher Jane Benett (1957-), Edith Dekyndt is attempting to cultivate our intuition of material vitality, by demolishing the opposition between life and matter or humans and non-humans, and the persistent association of matter with inertia and passivity.
Her works indirectly prompt the visitor to reflect on the domination of the environment by humankind, and the interdependent relationships that regulate everything that inhabits the planet. In this sense Edith Dekyndt’s work could be said to be the result of a form of ecology, that is to say ‘the observation of an environment’.

At Le Grand Café, Edith Dekyndt revisits her installation The Black, The White, The Blue, recently created for the Kunsthaus art centre in Hamburg, Germany (2019).

For 30 years, the substance of Edith Dekyndt’s work has been drawn from appropriating everyday materials and re-establishing in them a value that is outside of their habitual uses. She generally finds her resources in the context of each exhibition.

Her project at Le Grand Café responds to port operations, in Hamburg as in Saint-Nazaire, referring to international freight trade and, in particular, to the containers of used consumer goods sent from Europe towards the world’s most fragile regions, evoking the imbalances of North-South commerce. The raw materials of the installation are domestic objects– a sofa, a freezer, a canopy and refrigerators. Edith Dekyndt symbolically assembles this waste into spatial arrangements that manifest the interrelation of human beings, the material world and the natural elements of water, air or fire. The objects are being materially altered, sometimes in an evolving way, by the action of specific transformative operations such as decomposition, collapse or crystallisation.

Two works in the exhibition bear the titles of 19th century Romantic paintings commissioned by the collector Johann Gottlob von Quandt in 1820, intended to symbolise the south and the north. Johann Martin von Rohden received a commission to paint The Southern Nature in its Lush and Majestic Splendor, while The Nature of the North in all the Beauty of her Horrors was commissioned from Caspar David Friedrich. C. D. Friedrich familiarised himself with polar exploration campaigns through different expedition accounts published in the early 19th century. During the winter of 1820-1821, he produced oil studies of ice on the Elbe, near Dresden. These were probably incorporated into The Sea of Ice, the title of the painting that was to symbolise the terrifying beauty of the north. This very well known painting of a ship trapped in enormous blocks of sharp-edged ice is conserved in the Kunsthalle in Hamburg and is nowadays widely used as an emblem of the city.
Three more works by Edith Dekyndt are also named after other paintings by C. D. Friedrich: Night in the Harbour, Moonrise at the Sea and Over the Sea of Fog.

This reference to German Romanticism coincides with Edith Dekyndt’s preoccupation with landscape and the nascent ecology found in essays by the German naturalist and explorer Alexander von Humboldt (1769-1859), the American philosopher and poet Henry David Thoreau (1817-1862), and Thoreau’s mentor, the American essayist and poet Ralph Waldo Emerson (1803-1882). In the face of progress and growing industrialisation in the 19th century, some western scientists and intellectuals became conscious of the action of mankind on nature and argued for the exaltation of wild nature, while accepting that this nature is beyond mankind’s complete control.

Through the transformation of materials and objects, with an emphasis on a particular sense of vulnerability and on the process of dissolution, Edith Dekyndt alludes to the fact that the definition of what is considered as perfect or as disposable – what is pure or dirty – is always a matter of perspective and of moral judgement. In her creative work, mankind’s perceptual capacities are placed in a social and political context where the supposed neutrality of natural phenomena is forcefully contrasted with the ways that mankind makes them its own and uses them.

Edith Dekyndt’s installations are conceived as landscapes within which the visitor is allowed to wander freely. The spaces that she creates set up an atmosphere, a climate that generates its own ecosystem where objects and materials are linked and interact without hierarchy. From this, the visitor can experience a feeling for the concept of Stimmung*: the will to be entirely in the world. The atmosphere is one that evokes the contemporary world in all its brutality and fragility.

* Stimmung: a sense of plenitude when confronted with a landscape, so powerful that it brings about the desire to be absorbed into it and become the landscape itself.
—

The exhibition The Black, The White, The Blue was presented at Kunsthaus Hamburg (Germany) from 8 June to 18 August 2019.
With thanks to Konrad Fischer gallery, Düsseldorf-Berlin (Germany).