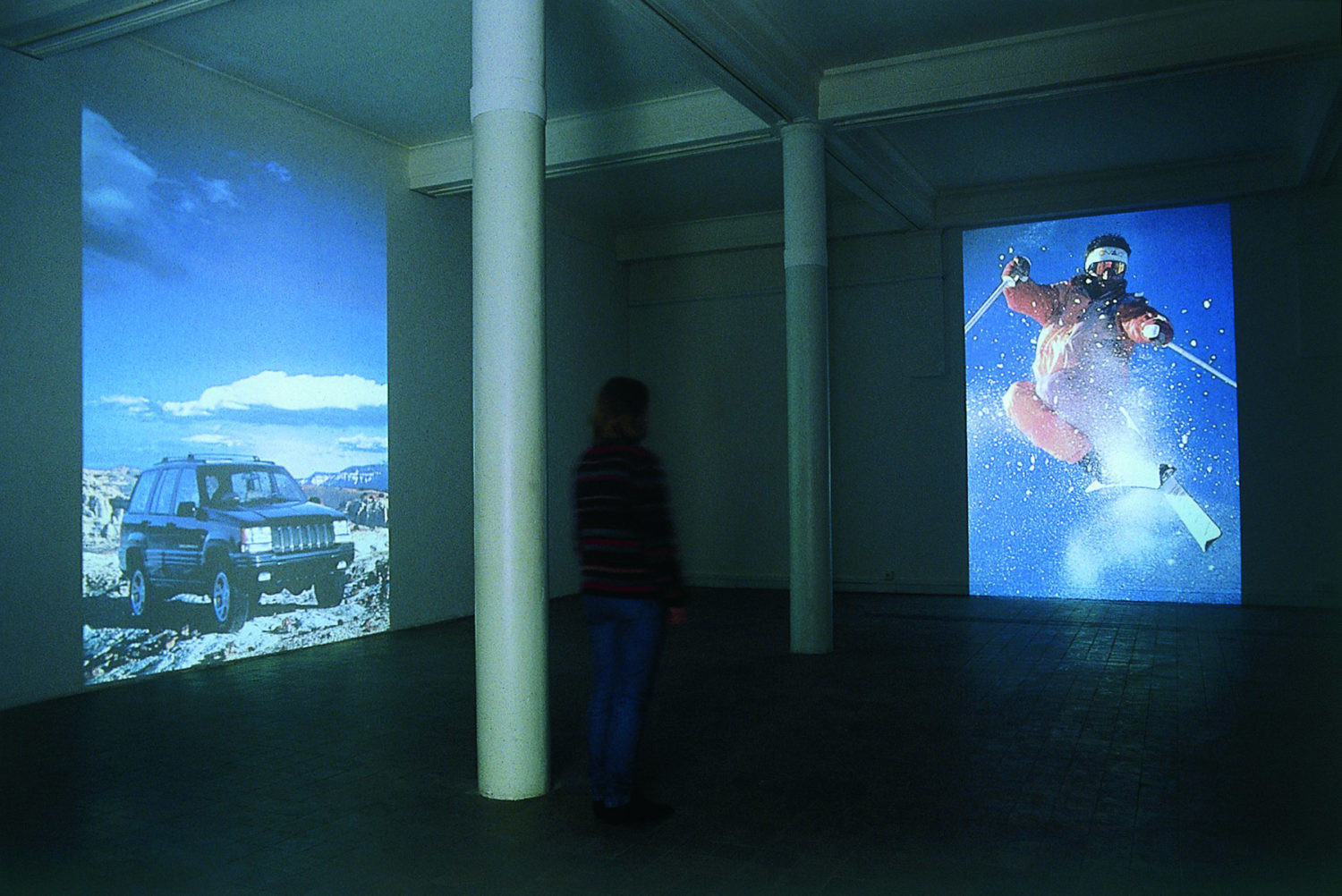 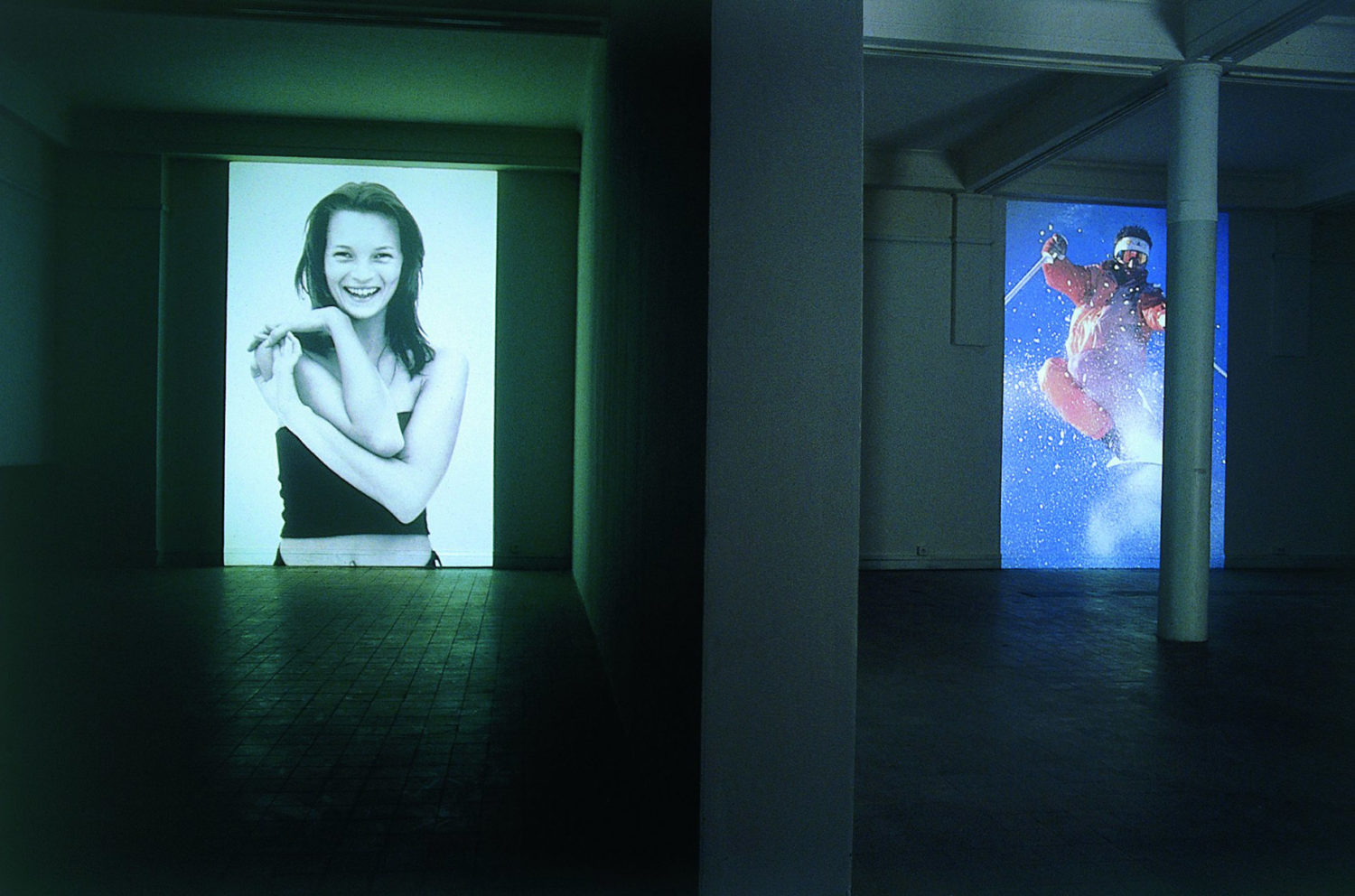 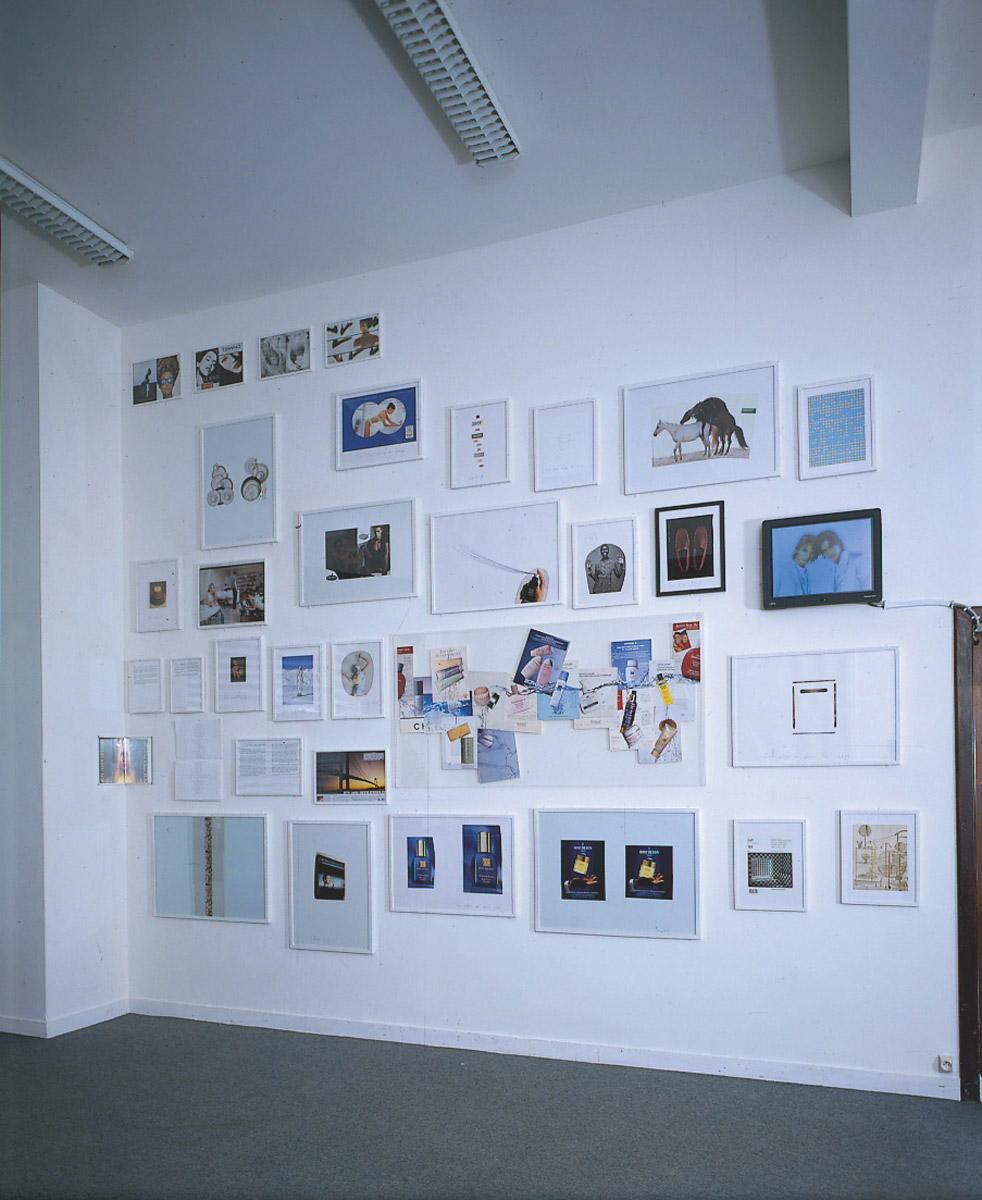 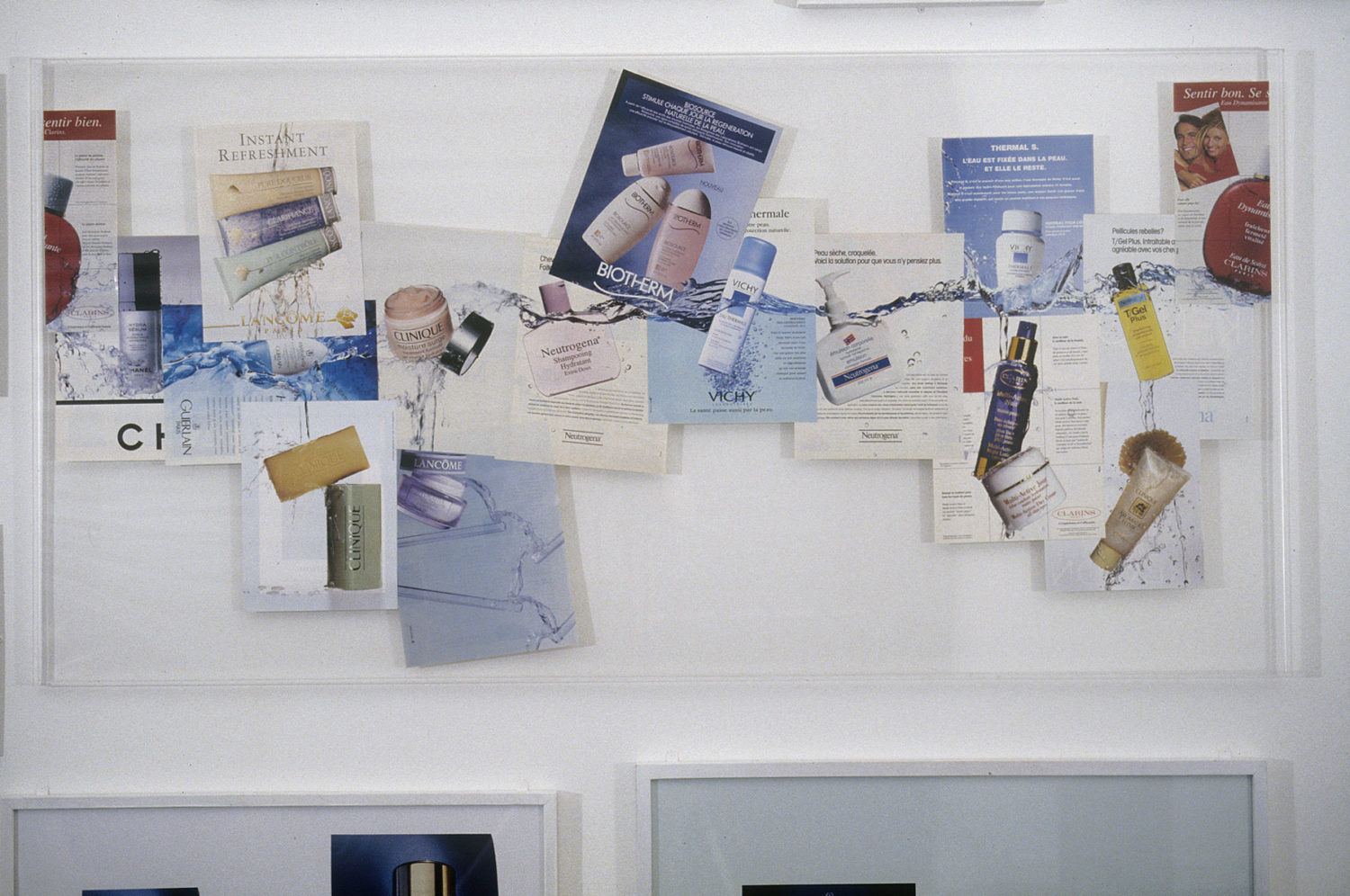 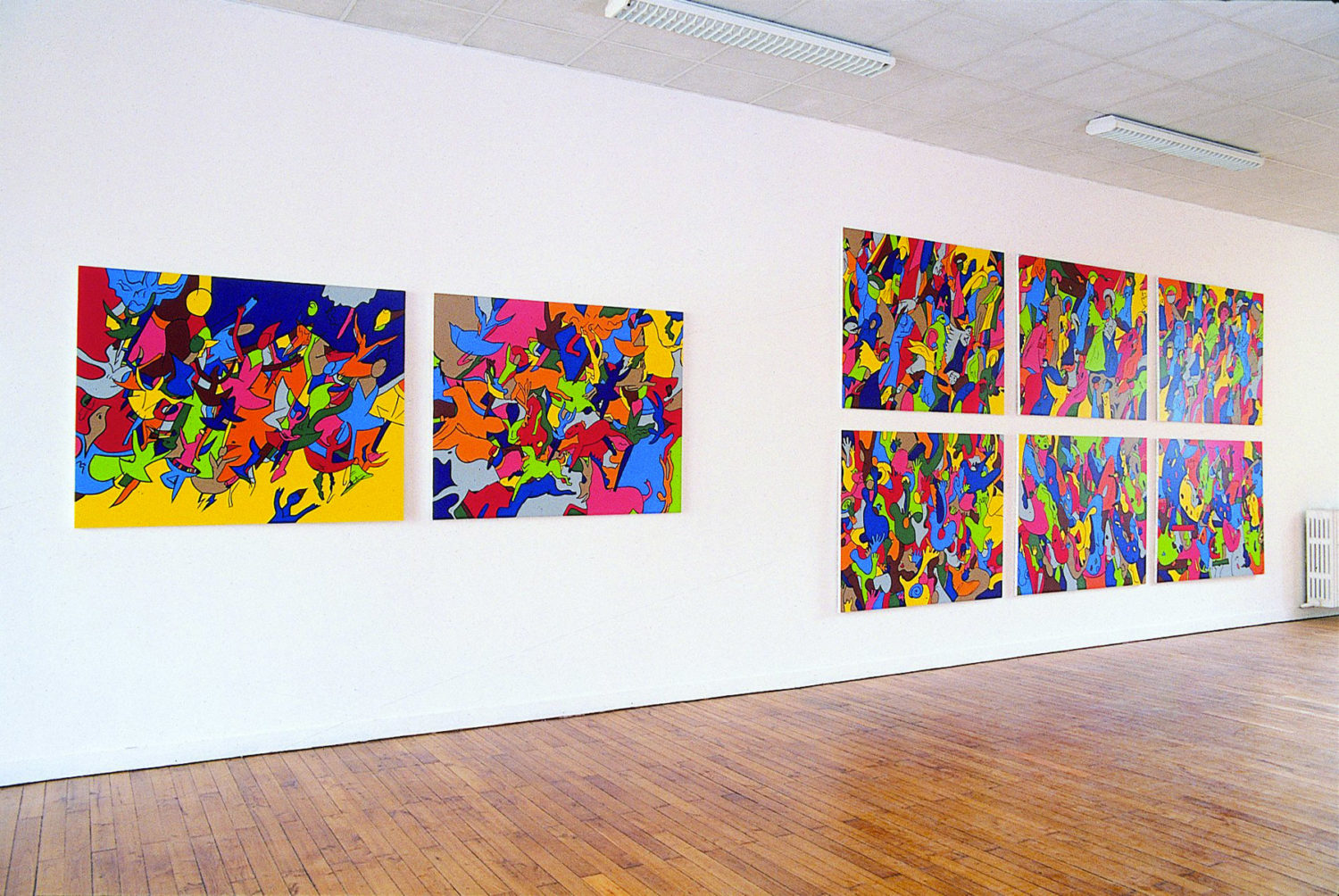 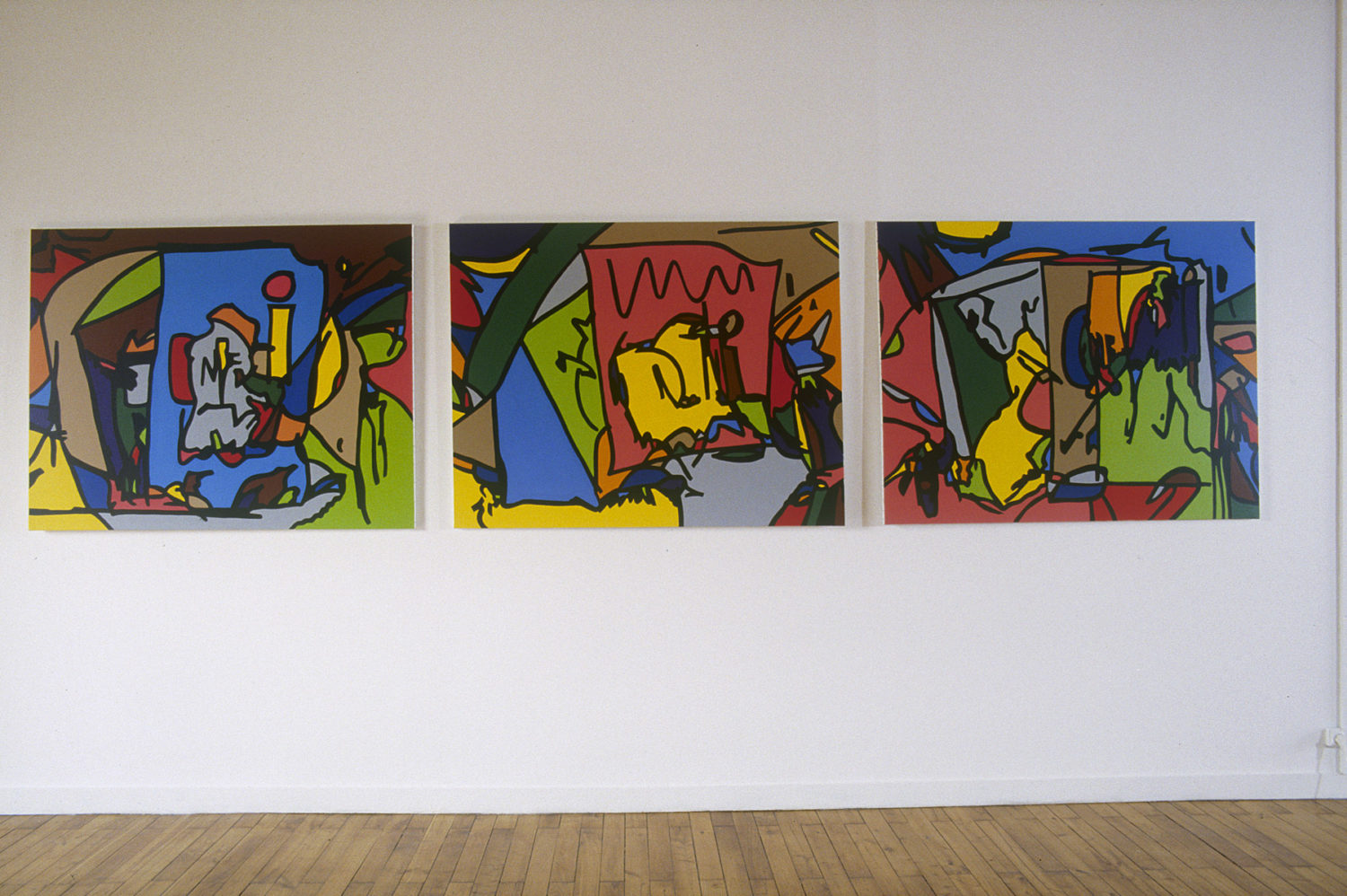 The exhibition on display at Le Grand Café examines questions of authorship through the work and approaches of two artists: Claude Closky and Jean Philippe Lemée.

Because of Claude Closky’s interest in the notions of activity and idleness, borrowing is very logically a characteristic trait of his work. In fact. his work draws on the highly codified universe of advertising images in magazines. After having produced inventories and classifications of consumer goods and images cut from supermarket promotional booklets, cosmetics, perfumes, watches, jewellery and luxury goods in general, over-represented in magazine ads, now infiltrate his artworks: collages, books, photos. Along with this iconographical shift comes a new attitude towards the question of borrowing. Now more radical, it is much more apt to talk about appropriation.

He isolates the codes of these adverts, exaggerates the image, its language and its mechanisms, and plays on the conventions of representation. In this way Closky kills two birds with one stone: on the one hand, he tells us that signs (which make up the language of advertising) are consumable goods like the products – that they have the same status. On the other hand, by playing with appearances, he puts us back in the heart of a reality that exploits us and in which it is up to us to unravel falsehood from truth, fiction from reality.

Jean-Philippe Lemée’s paintings share with Claude Closky’s work a taste for accumulation and the proliferation of the motif, while at the same time relegating it to the rank of a decorative element. Sampled from the field of art history and long before they become paintings, Jean-Philippe Lemée builds stocks of images that literally pass from hand to hand, in a playful and wry operation of the delegation of making.

Jean-Philippe Lemée has conceived of a group of 15 new canvases for the exhibition, the Multiplication series (after Fra Angelico, Matisse, Seurat and Watteau), in which the artist declines the consistent presiding principle of his picture production: choose a subject, offer it to strangers who make a drawing of it in a very short time, trace the contours of these sketches with a black felt pen, allocate colours by producing models on a computer and entrust the transfer onto canvas of the whole (after enlargement) to his ‘assistant’, a sign painter who only works in black outlines and blocks of colour. From these copied pictures, Jean-Philippe Lemée lifts a detail (all the angles from one, Fra Angelico’s Virgins from another, for example), and multiplies it in a collage operation. So, in Jean-Philippe Lemée’s composition, particular status is acorded to drawings that, from an academic point of view, are cobsidered bad. The recycling of motifs is related to the celebration of successive authors, since the artist considers that a drawing produced by an unknown amateur is just as worthy of being looked at as the signed work of an artist. As regards the series entitled Eh oui, this shows six copies of a piece by Jacques Villeglé (an artist working with posters was part of the Nouveau Réalisme with Raymond Hains), each produced by a succession of people.

Claude Closky
Born in 1963 in Paris where he lives and works.

Jean-Philippe Lemée
Born in Rennes, France, in 1957 where he lives and works.